Yeah, “Going South” was the key to success this weekend. The weather forecast for the north was kind of undecided with rain and other obstacles, so south was the direction. As I don’t have a good hiking guide for Ticcino it was rather difficult to pick something adequate. The “Via Alta della Verzasca” was ruled out as even just doing part of it would have meant to take a day of on Monday. Not acceptable! Eventually we agreed on the “Via Alta della Val Carassino” which is a newly established hiking trail. And the beginning of the ridge looked perfectly suitable for overnight camping. 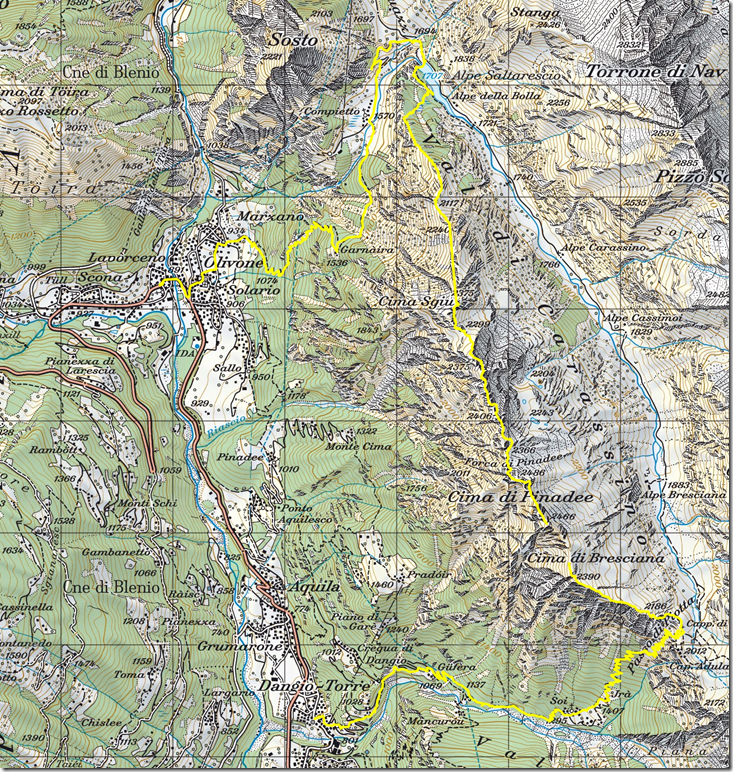 “Going South” by car can have issues. The issue is called “Gotthard” tunnel where you can easily meet lots of other people having the same idea. This translates into a long queue in front of the tunnel which slows you down by 1-2h at least. In order to dodge this potential problem we decided to take public transportation which is in principle a very good idea. There is one problem though: Nobody is telling you to get out at the right stop. And that is what happened to us. While being too much involved in some meaningless discussions we missed the right stop. When we realized the mistake it was too late, as the train was already moving again. So we had to get out at the next stop, wait quite a while for the next train to go back, etc. Finally we arrived with a delay of one hour at the place where we had to take the bus to the starting point of our hike. 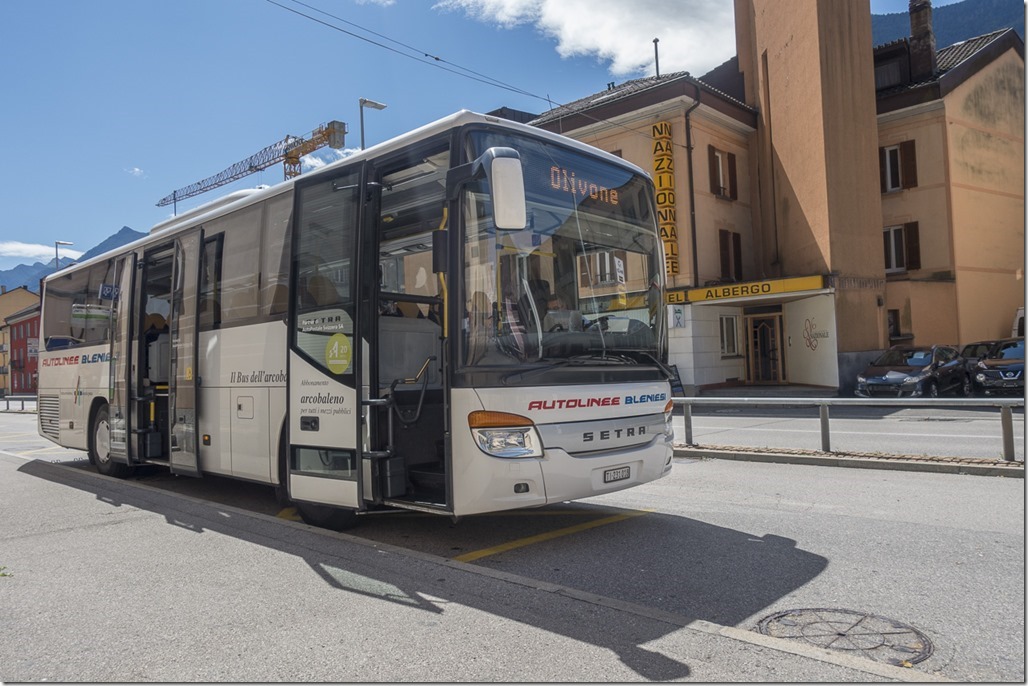 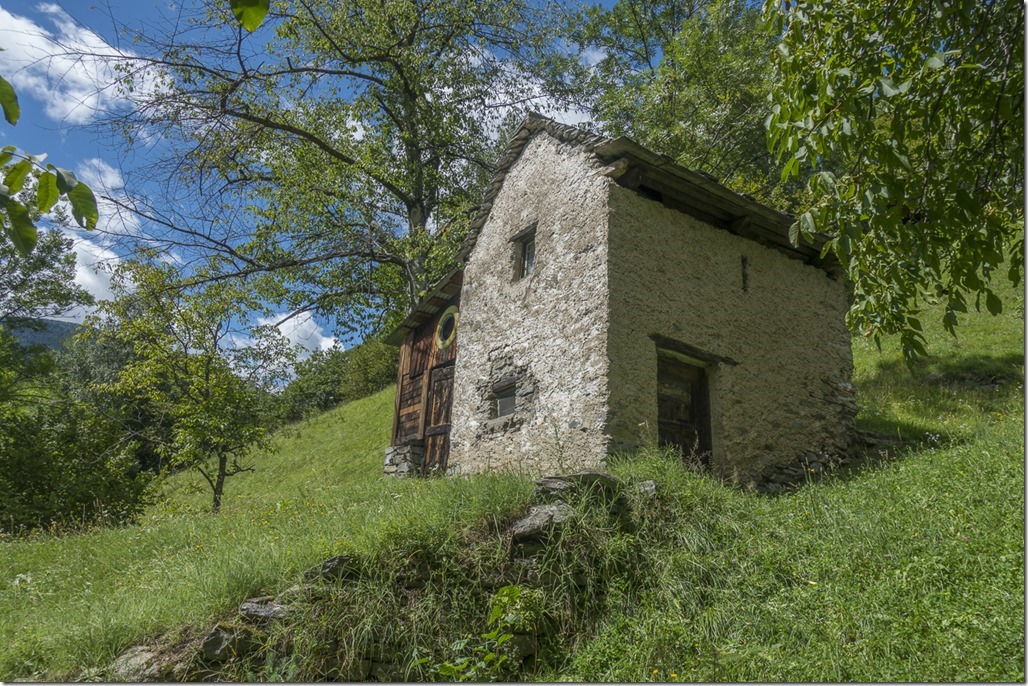 When crossing the last steam on the way up I filled the water tank. We needed some additional water for cooking and drinking for the next day and since we were planing to hike on a ridge we could not expect to find another steam there. This mushroom we left were it was. I am not sure if the Fly Agaric is also poisonous for animals but some must have tried a bit. 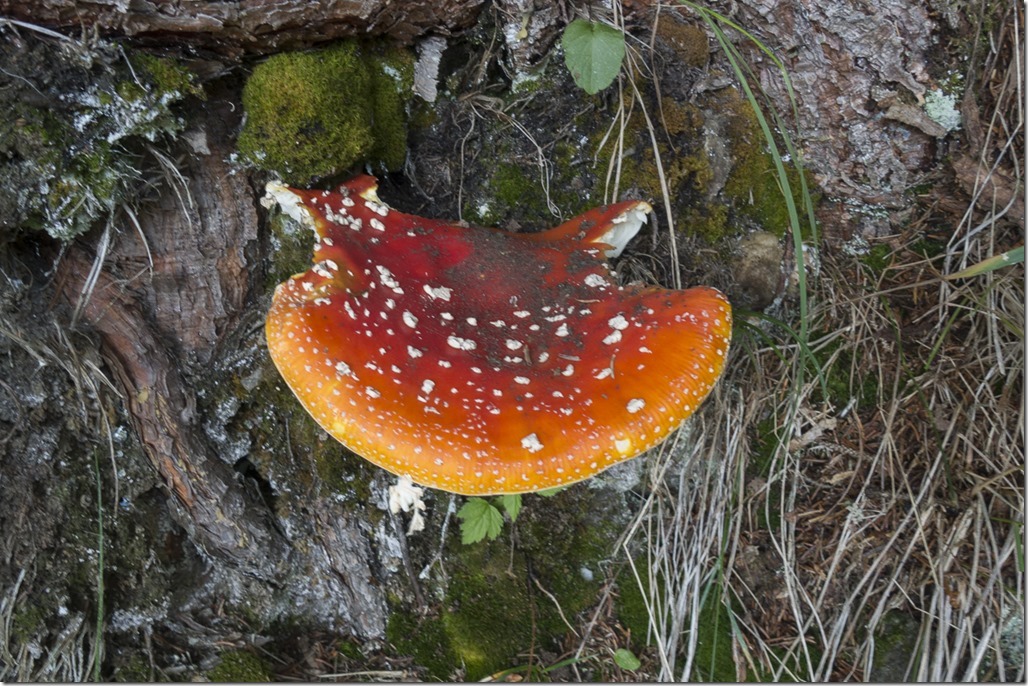 Towards the end of the hike is was getting steaper and the trail had lots of turns because of that. 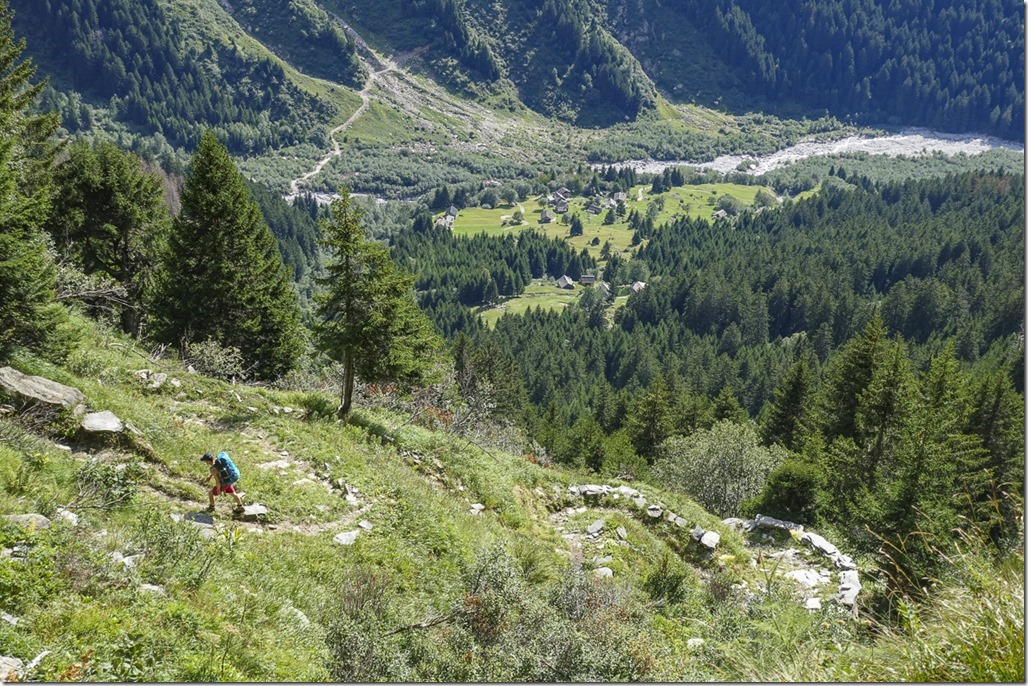 From a distance you could already see the alpine hut which was located just on the pass. Actually you could see the flag of the hut from even further down. 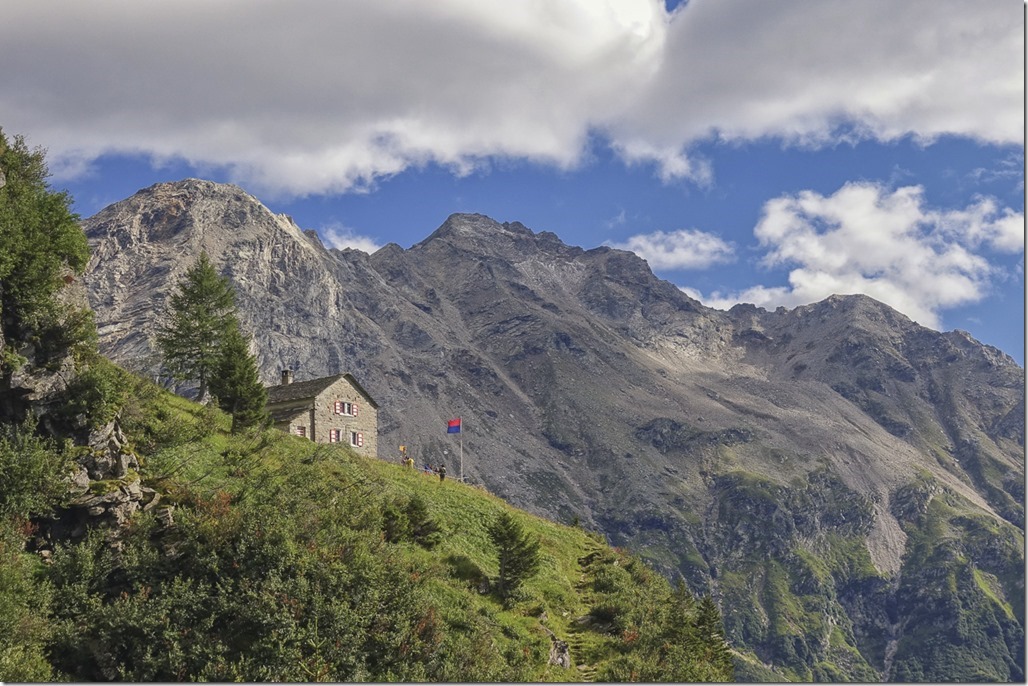 Once we reached the pass we started to look for a place for the night. There were several options available. We decided to start going up the ridge a bit until there was the first flat section which would give us some head start for tomorrow morning. Looking back on the ridge you can see the hut further down. 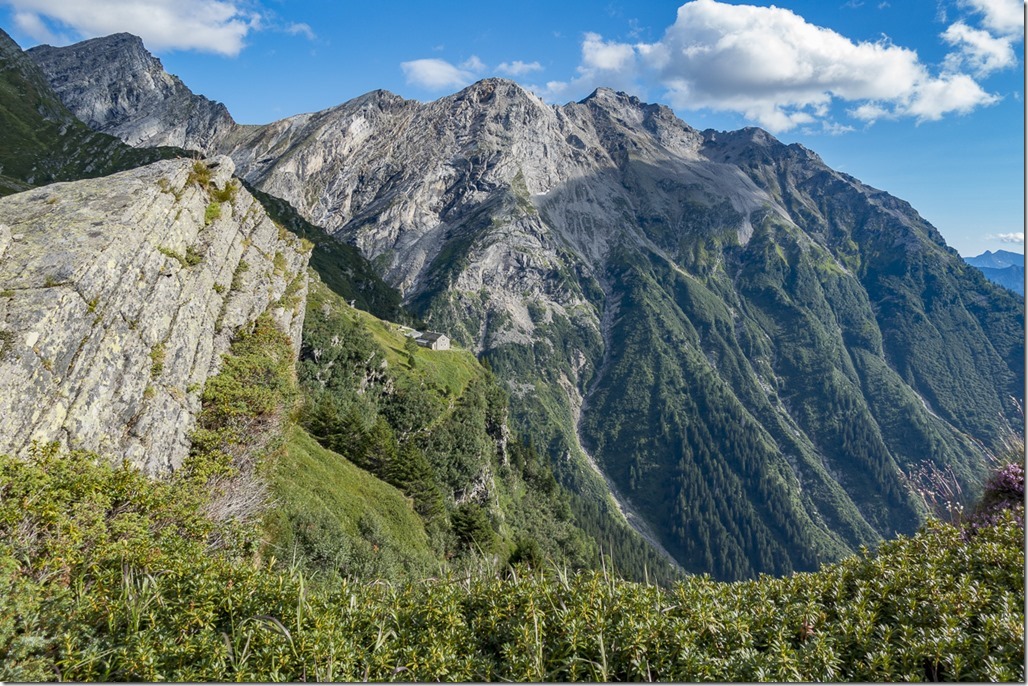 Eventually we found a very nice location with a great panorama for the night. The wind was a bit of a problem as it was blowing alongside the ridge but as long as the sun was up it was still warm and when the sun would go down the wind would probably just go away. So we started the preparations for the night which usually means open the bottle of wine and enjoy the view and eventually do some cooking. Far below us some small village in the mountains. 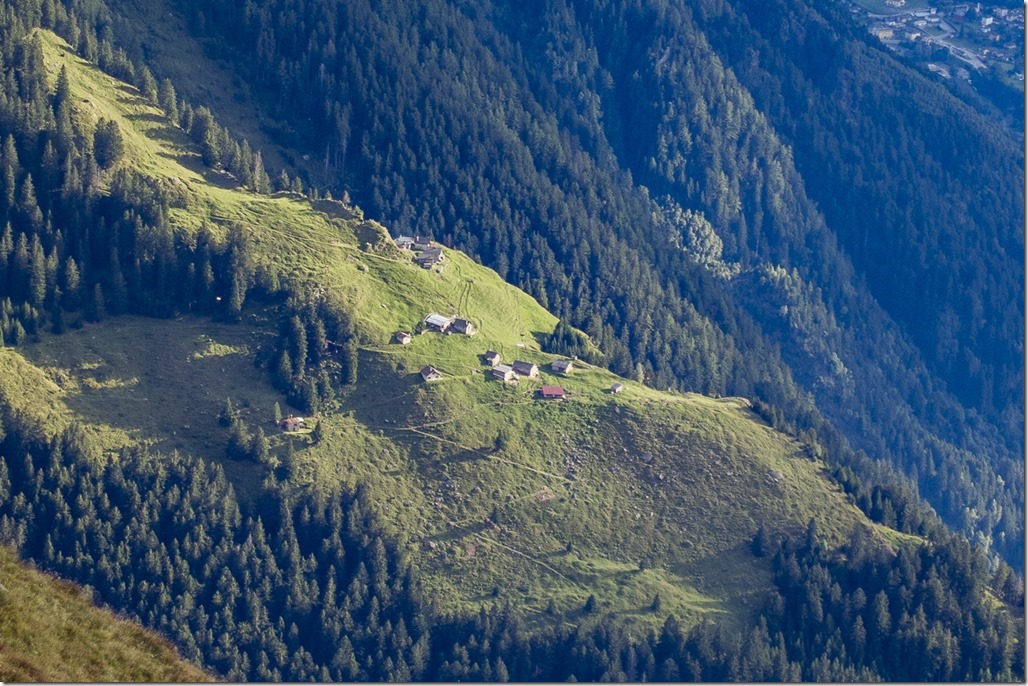 Looking towards the higher mountains you could see that there was some recent snow. Based on our altitude I would say that the snow was above 2800m. We didn’t plan to go that high tomorrow, so we would probably not get in contact with any snow.

Art made out of stony: On the top you can see a face looking to the left, can you? 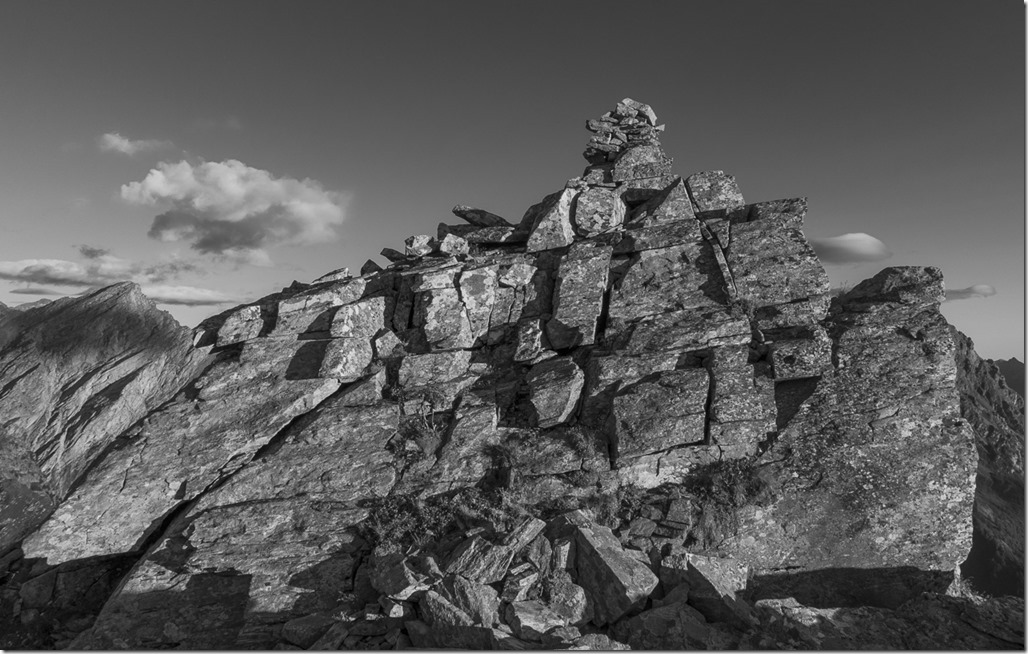 The last light of the day. To the right you can see the ridge where we will continue to hike tomorrow.

One of the few clouds in the sky turned reddish at some point. 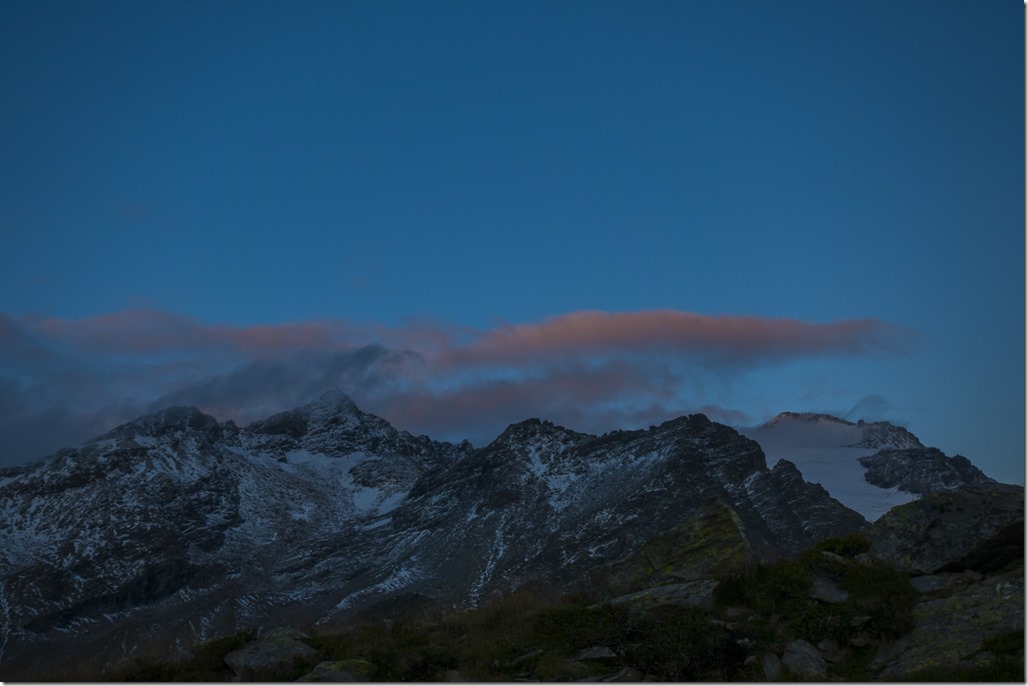 Enjoying the sunset with a glass of wine. 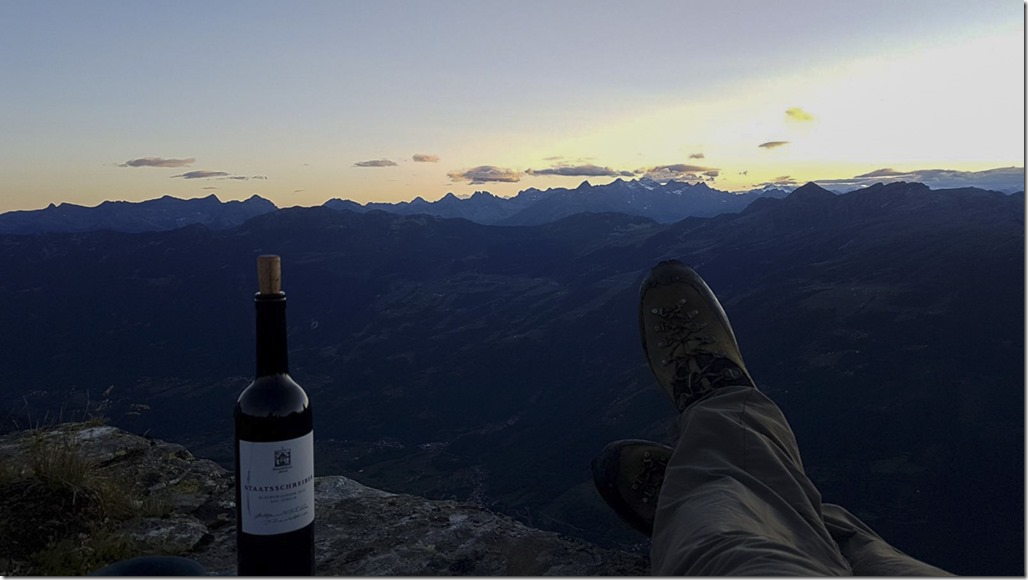 Being in the mountains you can always see the stars much more clear. Below you can see the “Grosse Wagen” – “Big Dipper” showing the way to the polar star which unfortunately is not on the picture. Looking down you saw the lights of the villages. 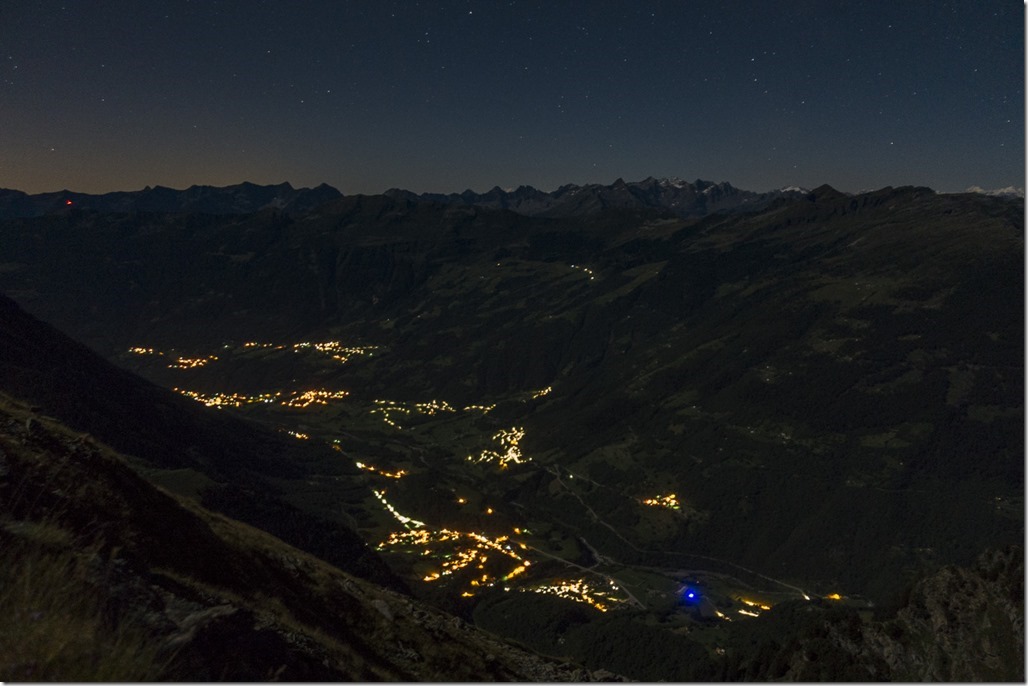 Did I already mention that the night was pretty cold outside? At some point during the night I put my watch outside of my sleeping bag and after a couple of minutes it was showing 2° temperature. Despite the outside temperature I was perfectly fine inside my super light 460gr summer sleeping bag. But I have to admit that I didn’t take of any cloth and added a second pair of socks before going to sleep. The only problem when you have such outside temperatures is getting out of it. Brrrr… Usually you get up early in the mountains but today we decided to be super lazy and wait for the sun to come up. As there were some higher mountains in the back of us that would happen maybe 1 hour after sun rise. Cool, so we were watching the sunrise from within the sleeping bags.

Some of the mountains are already in the sun. The white one on the left side of the picture is actually the highest one in Switzerland “Dufourspitze” at 4634m. I checked on the map: It is 110km away from us. 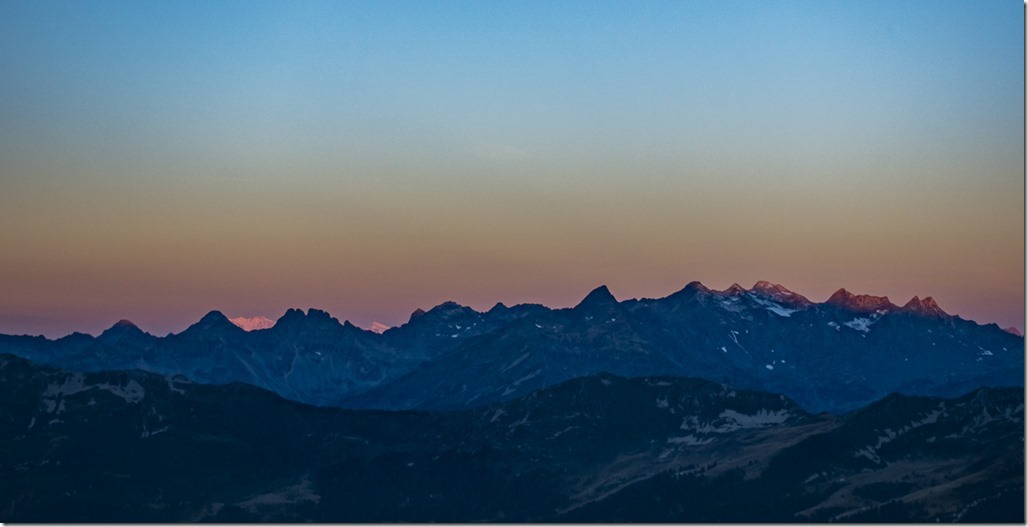 In the back the sun is slowly moving towards the ridge, fighting with some clouds.

And as soon as the sun is coming up everything is warming up. A view of our camp and the ridge we will hike. 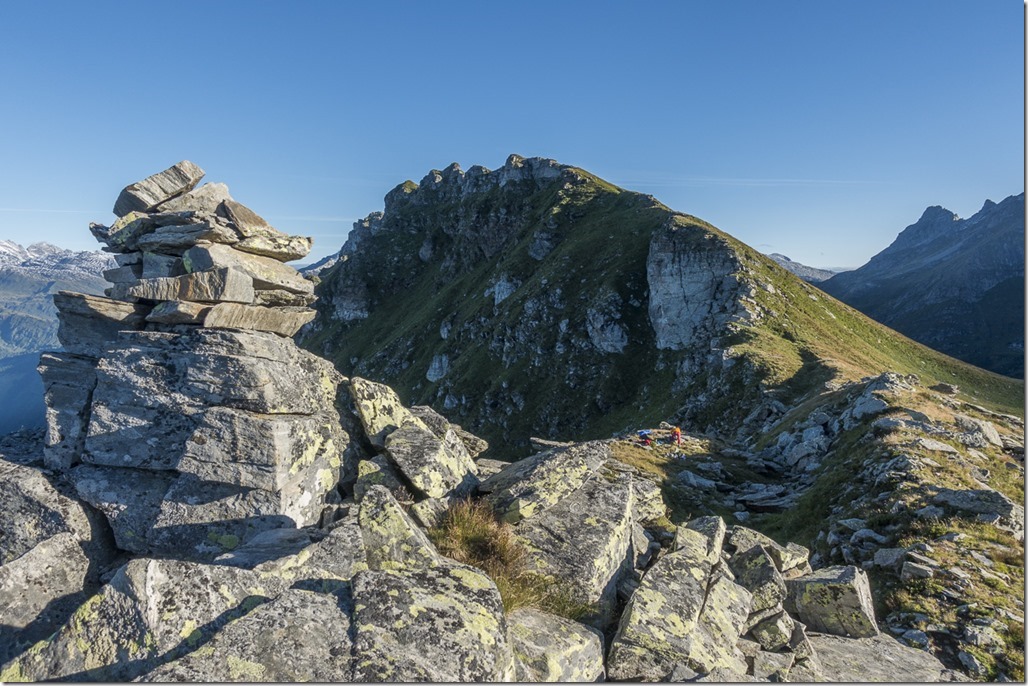 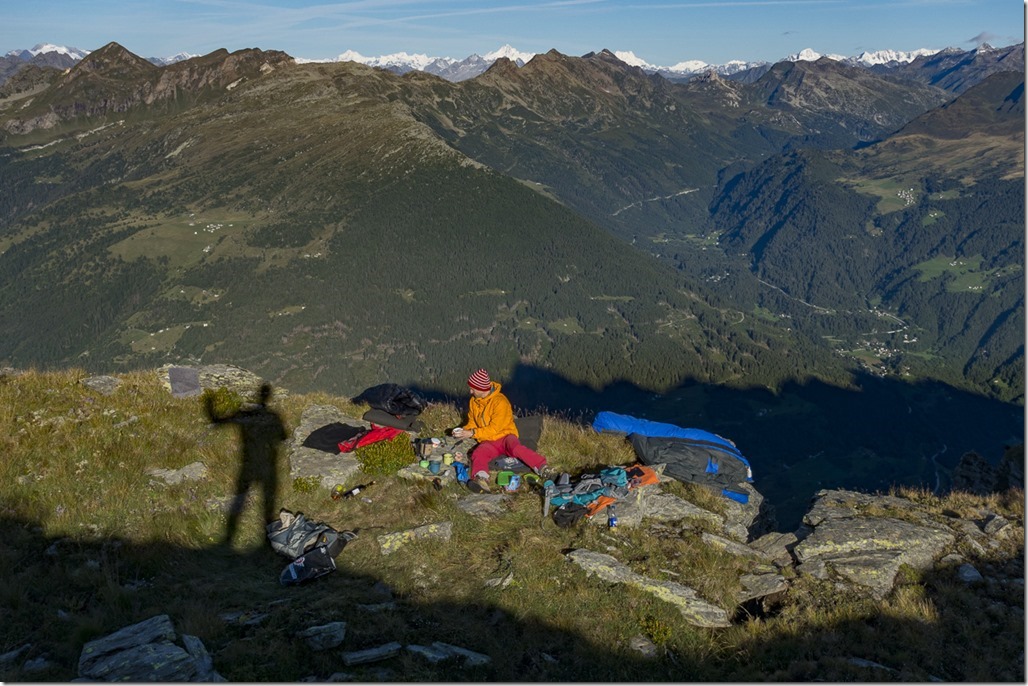 Nice panorama from the hike

View back on the part where we came from. In some areas you had to scramble over rocks. You have like millions of different possibilities and if you pick the right one you don’t have to use your hands.

As we were not trying to beak any speed record there was enough time to look around and take photos of small things. 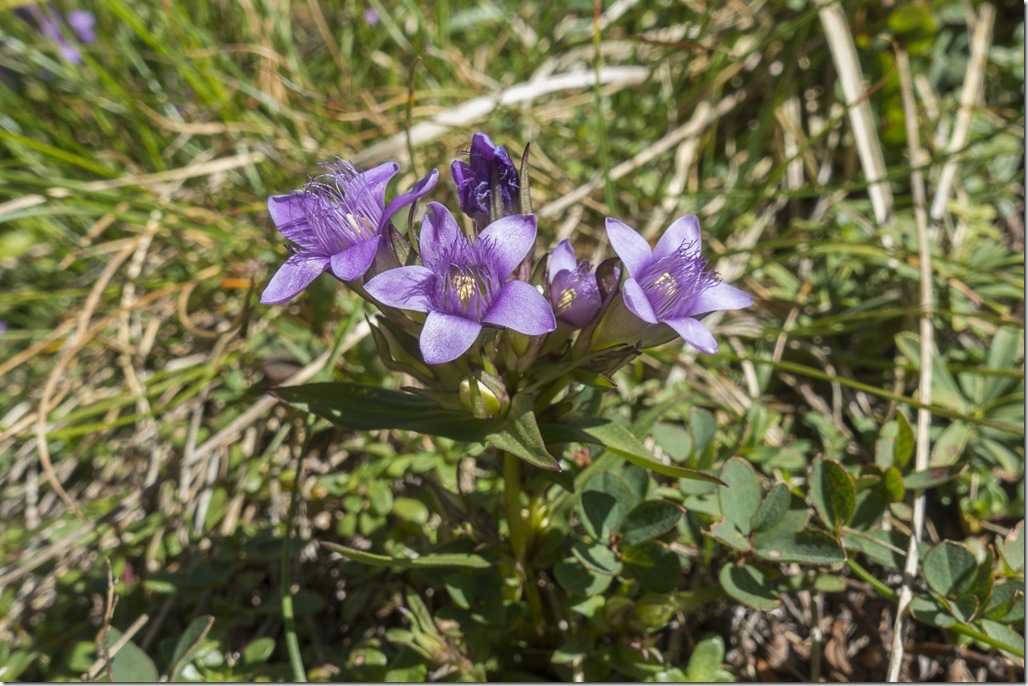 In a few sections the trail was steeper. But there was always a rope or another form of help installed in order to get safely though that passage. 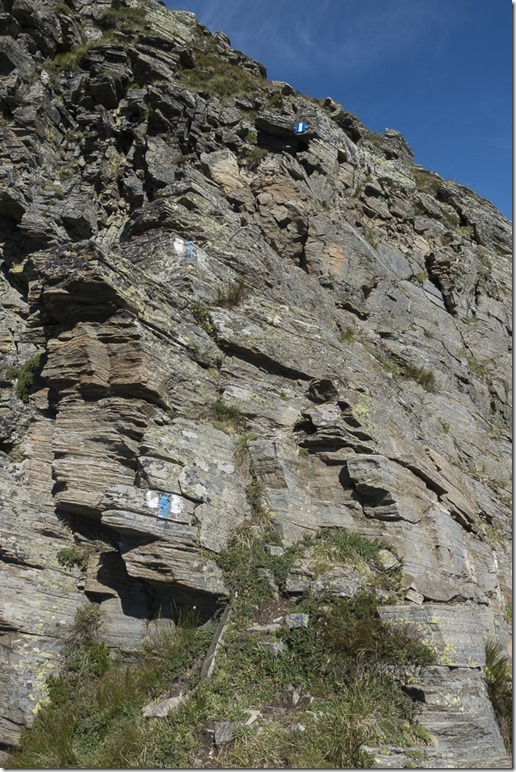 King of the hill! After having crossed the last high peak on the ridge we started to slowly get down. And we started our discussions about which pizza we should order after the hike. But the ridge had one last surprise for us. If I would have to rate any difficult section of the hike than it was actually the section which was still ahead of us. It wasn’t difficult as there were again fixed ropes installed. But the fact that it was steep on both sides and the trail was getting narrower and narrower was just a different experience. So we stopped our pizza talk in order to concentrate. Of course once we were through this section we resumed the discussion about the menu and extended it to drinks and other options. 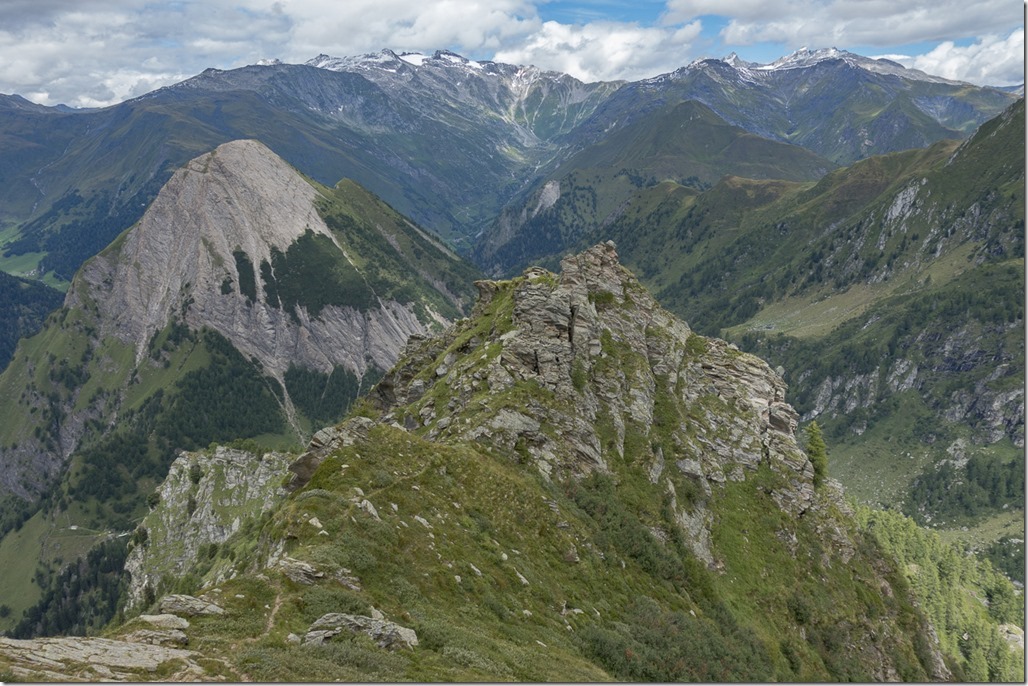 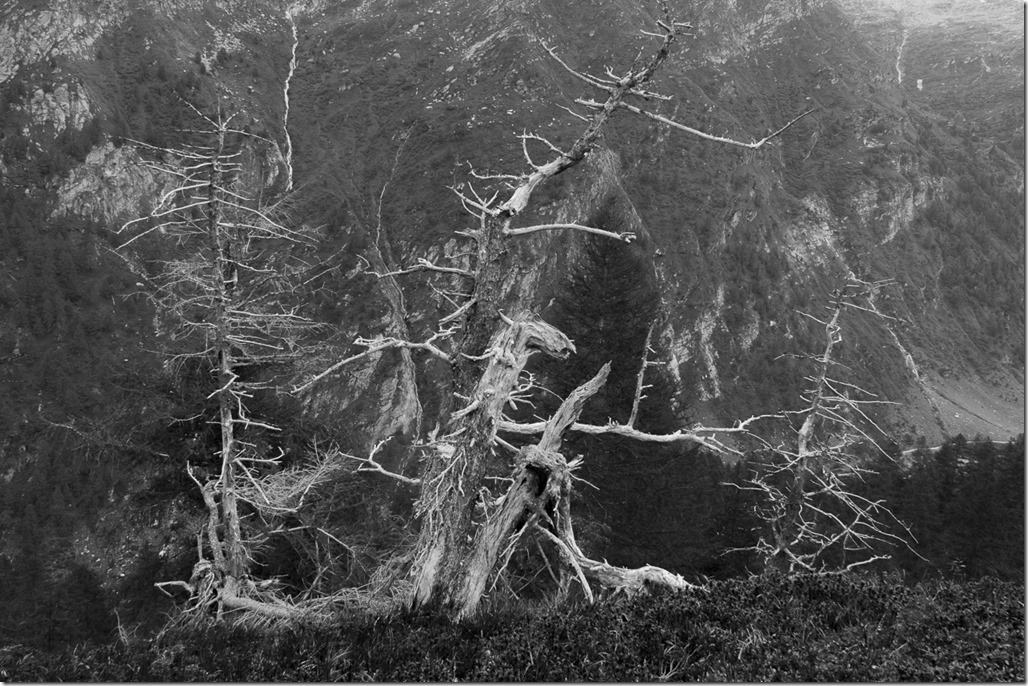 This small little artificial lake was actually the end of the ridge but it was not the end of our hike as we still had to go down another 600m of altitude. As the pizza talk had mad both of us quite hungry we accelerated our steps and made it down to the little village in half of the planed time, just to discover that we were too late for lunch time and all the restaurants had already closed … Damn. After taking the bus to Biasca we were got our pizza. So good, yum yum … !