Pizzo Leone – Ticcino to the rescue

Sometimes things go as planed. Sometimes the plan doesn’t work out. And sometimes there is not even a plan and something spontaneous happens. I would say that my the last weekend had something of all those components but nevertheless or maybe even because of that turned out to be very pleasant!

First of all there was a plan to go to Ticcino for some hiking & camping activity as the meteorologist didn’t manage to create a reasonably looking weather forecast for the northern part of Switzerland. Unfortunately this plan had to be abandoned at the very last moment. So I was waking up on Saturday morning with no plan. No plan is also good, but not good enough. Spontaneously I decided that this would be a good weekend to test a new way of making food on a hike&camp event. After visiting Transa I was the proud owner of a mobile grill which of course had to be tested immediately

. As Ticcino with the nice sunny weather was too far I away by the time I had bought the grill I picked one of the hikes I had on my wish list, the “Schächetaller Windgällen”, well knowing that the weather could play an important role in the execution of the plan. 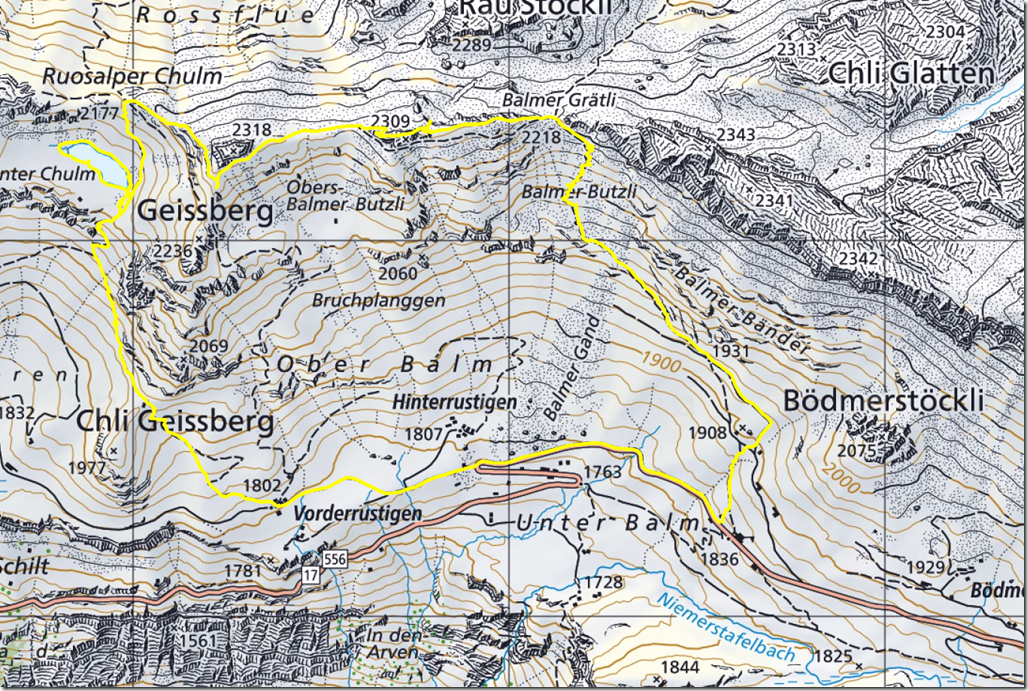 When I arrived at the starting location it was not raining but there were a huge amount of clouds floating around in the valleys only allowing the sun to occasionally hit the ground. Anyway the scenery was mystic and the temperatures not too bad so I started to hike up the mountain. 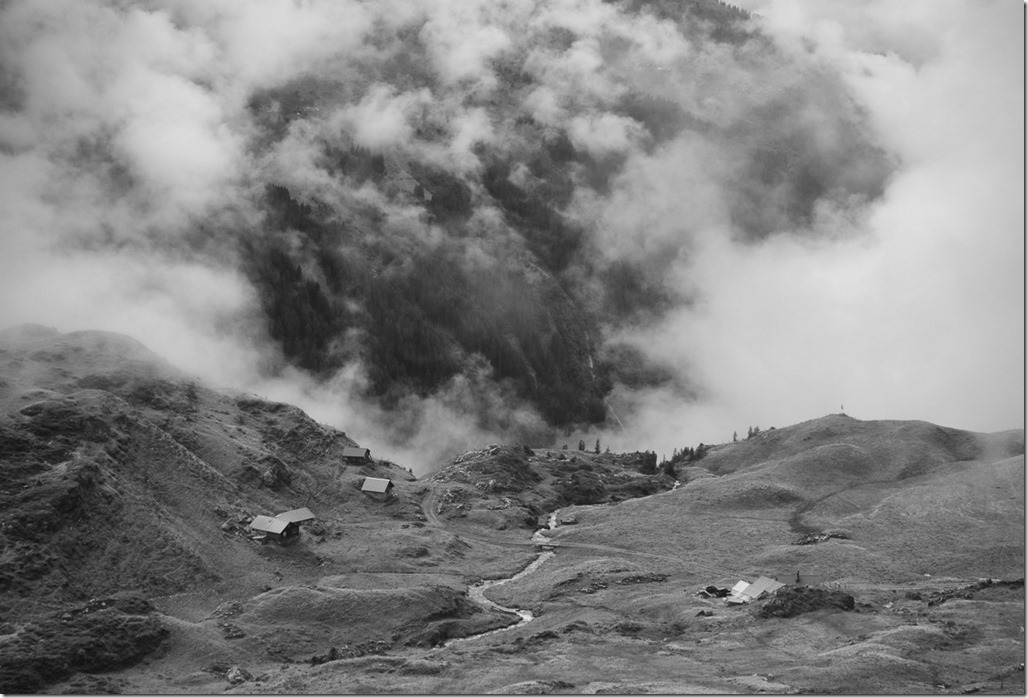 What I didn’t consider was the fact that even though it had stopped raining the grass/stones/anything was still totally wet. Well, I have those fancy Goretex hiking boots which should keep your feet dry. And they definitely do this on paper and for the first couple of months of usage. Mine however have been abused for far too long. So not long into the hike the boots started to feel like little swimming pools …

When I reached the ridge which should lead to my spot for the night the sun had lost the battle with the clouds. 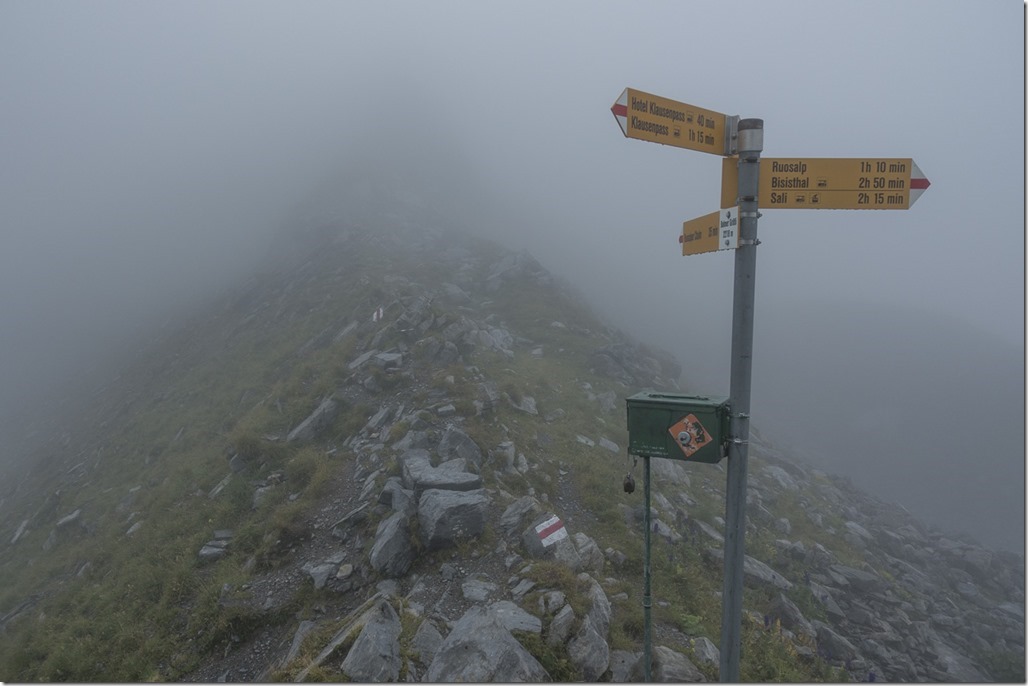 As today’s hike was rather short I decided to add some detour to it by staying on the ridge instead of following the hiking trail. The ridge was getting pretty steep quickly. So I had to scramble and climb quite a bit. 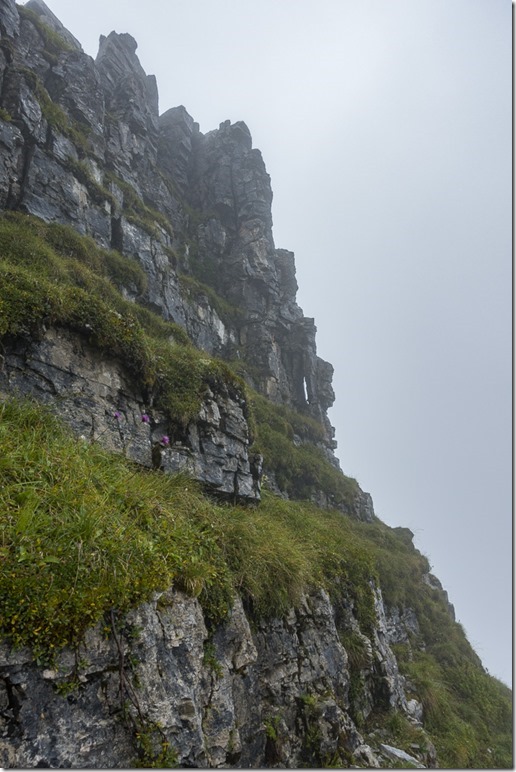 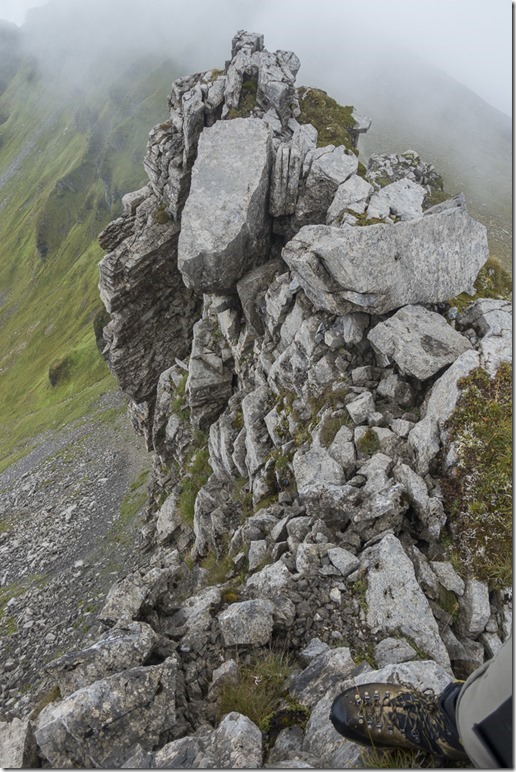 Because of the wet conditions my hands were wet all the time and as a result cold which mad me gave up the “walk-on-the-ridge” idea and instead go back to the hiking trail. 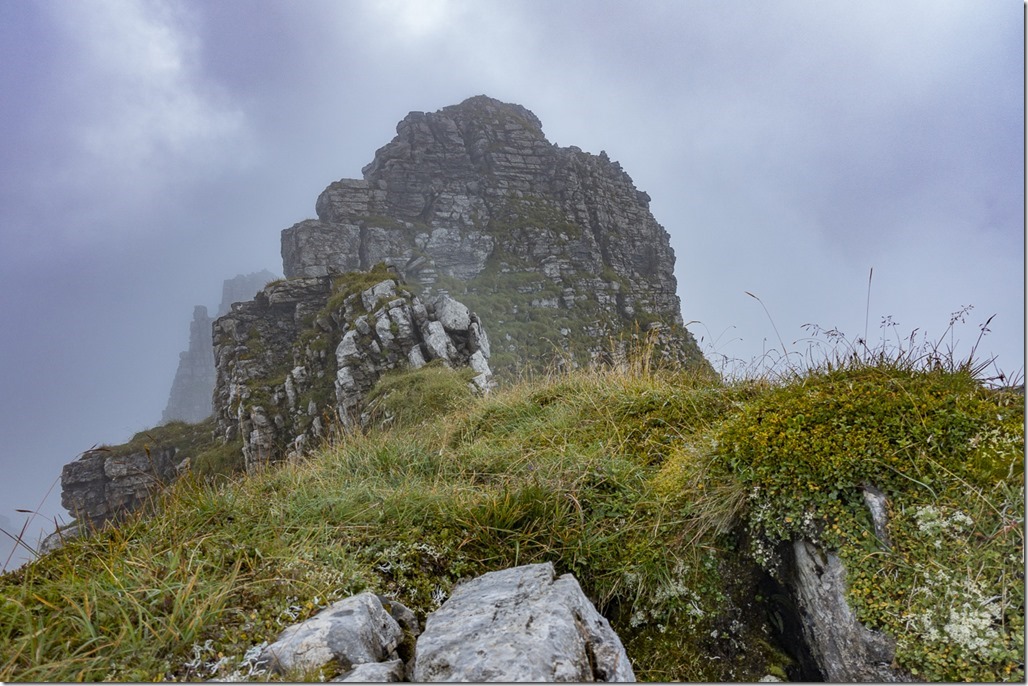 This is the little lake were I was planning to stay for the night. The idea to take a refreshing bath in it was soon abandoned. It was enough refreshing outside and the temperature of the water would have been definitely too much of a refreshment.

After circling the lake I selected a site for the night. Since everything was still wet I wasn’t unpacking everything as usual but just used the mattress to get some kind of dry place for my stuff. 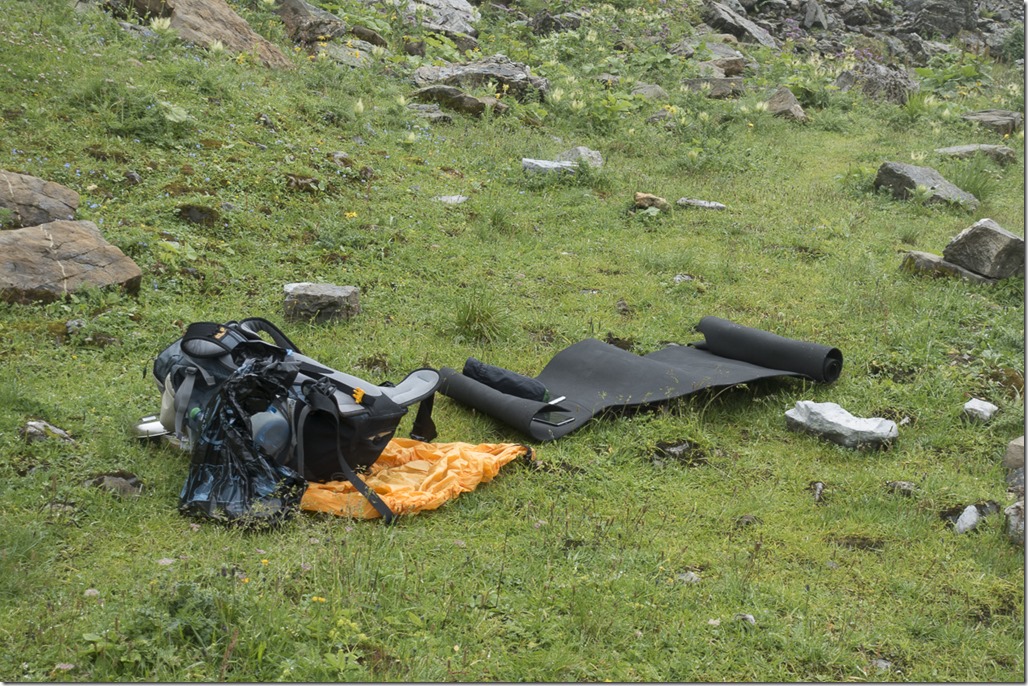 View of the lake. 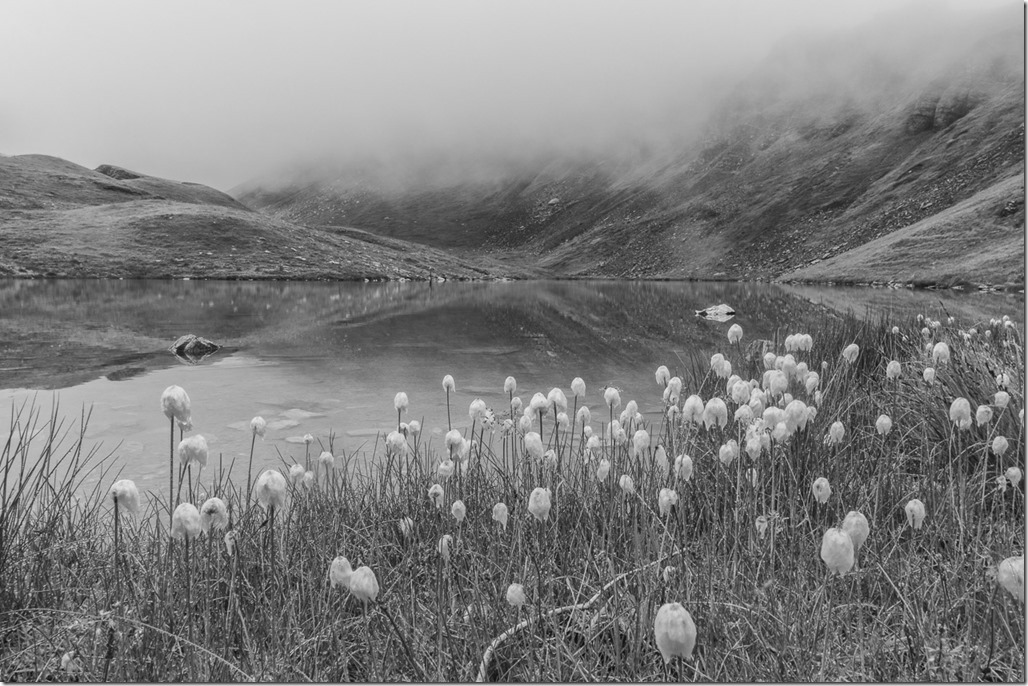 After settling down I decided to start testing my new grill. I had bought a fire-steel to lit the fire. But I didn’t get the fire going with it so I switch to plan B: A lighter. As it was still too early for dinner I only tested the “start a fire” part. As you can see from the following picture I was successful! By the way the grill can be folded and stored very efficiently in the backpack. Unfolded it has enough place in it to get a good fire for some nice barbecue. At this point it started to rain. Not like a heavy rain which makes you go inside but some light drops here. But after some time those light drops will make you feel wet nevertheless… I ignored this fact for quite a while but finally realized that this was not going to be fun at all. I didn’t have any tent with me. And after cooling down from the hike I was starting to feel cold, also thanks to my two swimming pool inside my boots. Eventually I had to admit that I was not properly prepared for this and decided to return home. By the time I was back at my car I was actually pretty wet all around and was happy to get into something warm and dry… Bye bye barbecue 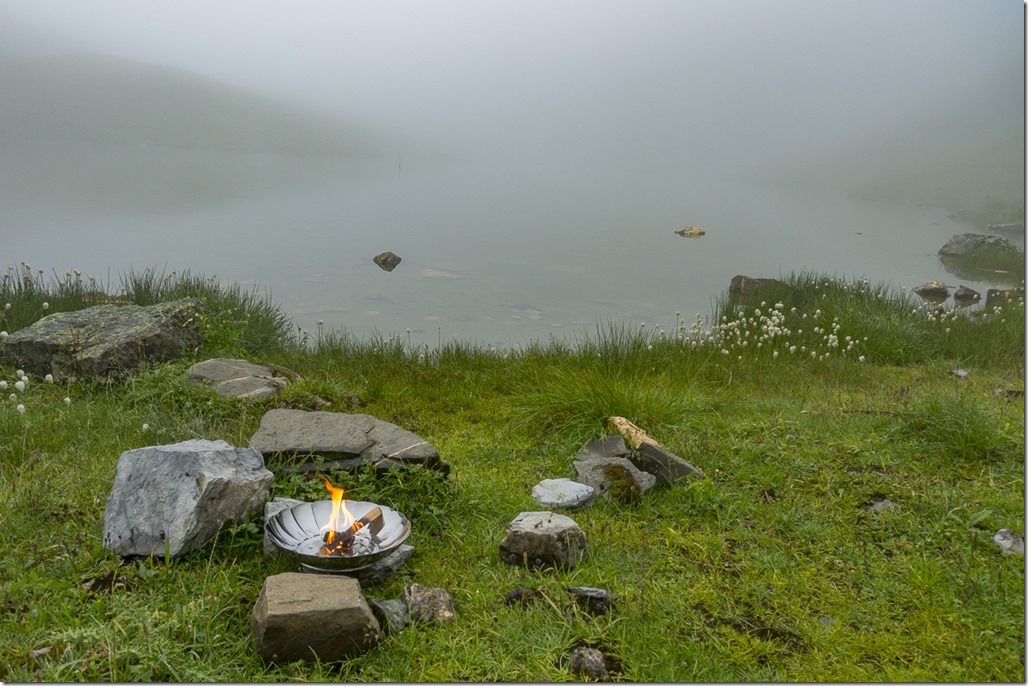 Later that day a new plan was created and the initial idea of going to Ticcino on Sunday was picked up again. In the end it was the same hike as before, just the camping was removed in order to simplify things. Going to Ticcino takes some time so no sunrise picture were to be expected. As the weather would be perfect, there was no reason to rush. In order to do a loop instead of going up on down on the same trail the starting point was Brissago and end point Porto Ronco from where you can take a bus back to Brissago. 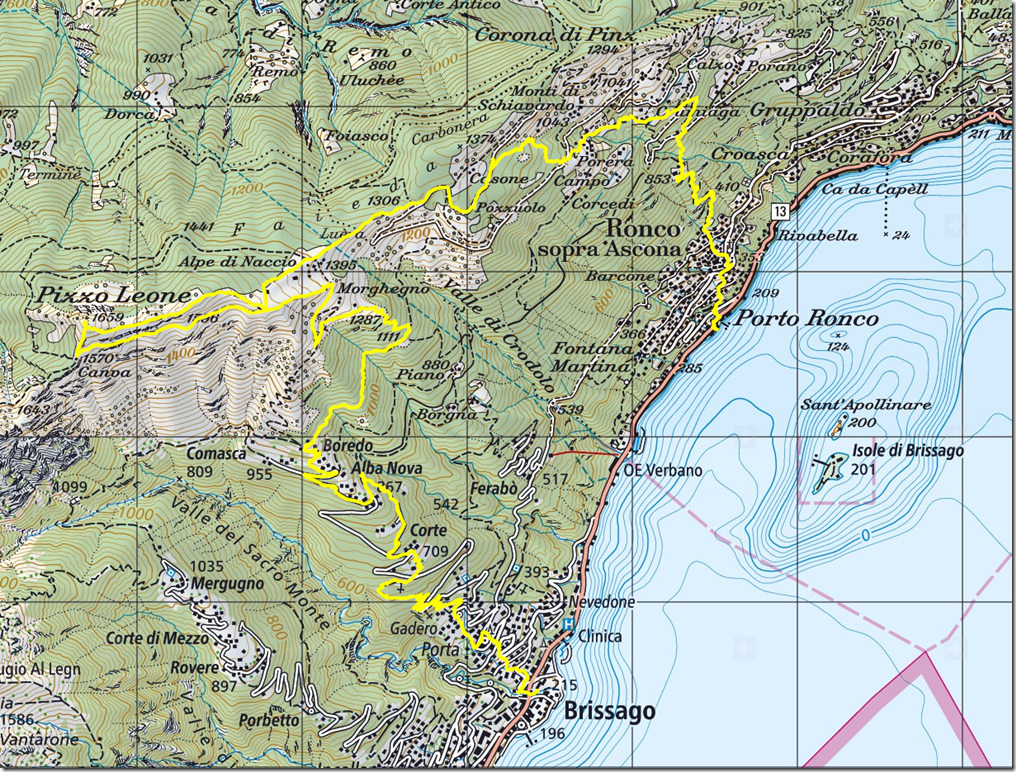 In Ticcino you can start at a pretty low altitude which means that a mountain which is just 1600m above sea level will give your quite a number of vertical meters. The first part of the hike was slowing climbing up the village of Brissago. Many stairs any many more nice villas and house to were alongside our path. It is so obvious why many people from the German speaking part of Switzerland are retiring here … there are worse places on this plant to be. 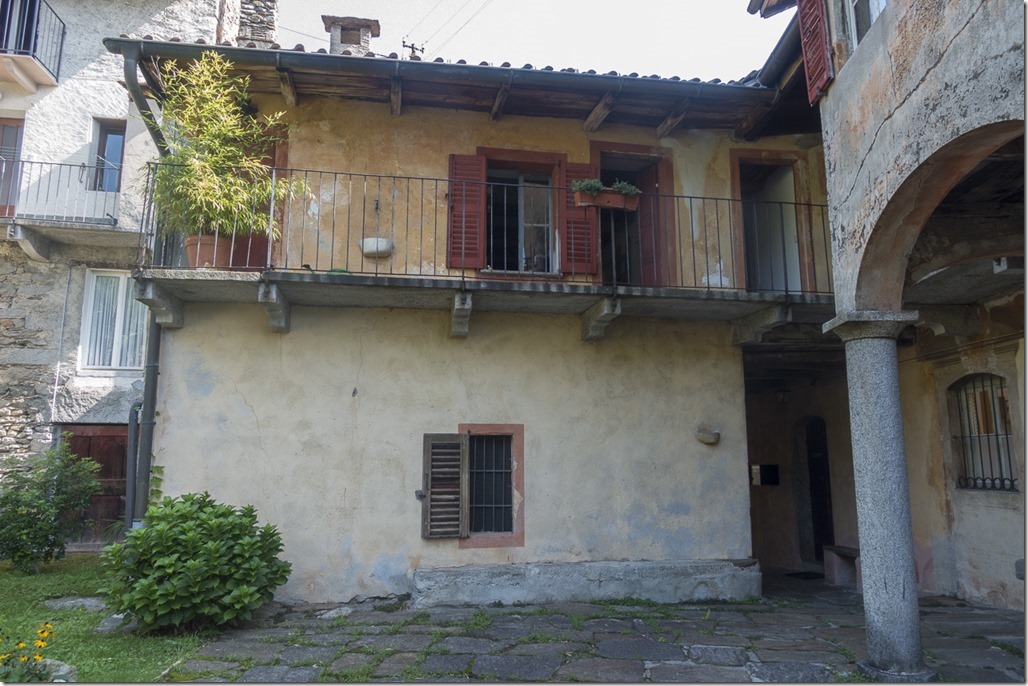 The trail was easy and the temperatures perfectly fine as long as you stayed inside the forest. Therefore the trail was slightly adjusted further up the mountain in order to have some more shade. 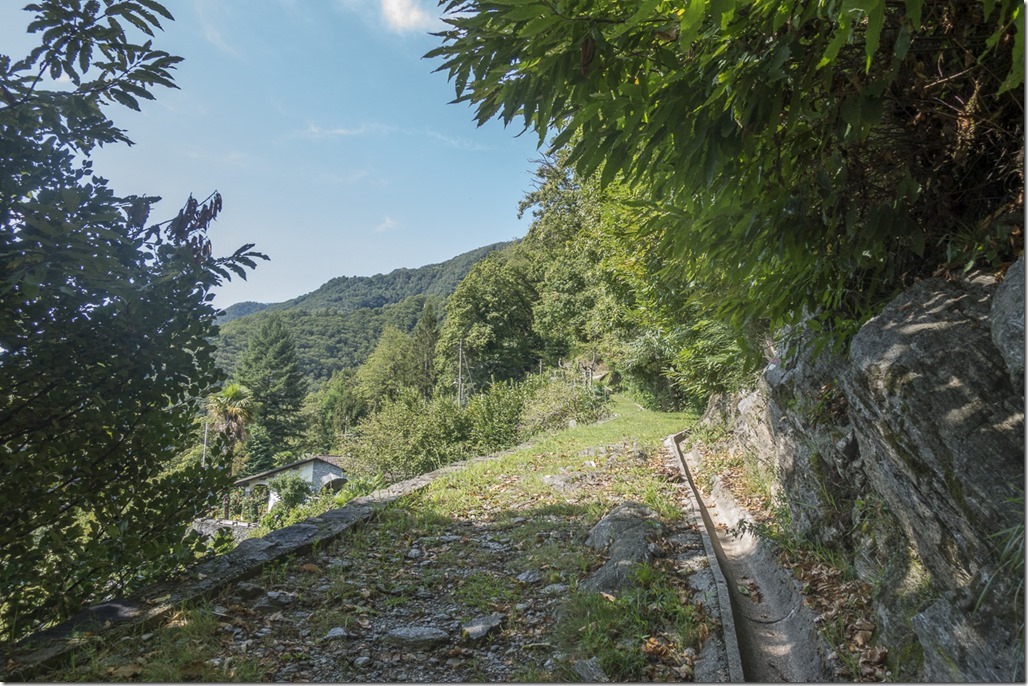 Following the rule that a steady pace is getting you up faster than the rush&stop strategy we soon had a nice view down to “Lago Maggiore”. Perfect place for a first break! After leaving the forest there was a first opportunity for a panorama.

One of my many “Isole die Brissago” pictures. Some might say I did too many of those. C’mon it’s a nice island, isn’t it? I am wondering how those houses get their supply up here? There must be somewhere a secret road. I can’t imagine that they are carrying everything up. Not yet on the top, but let’s just assume for the sake of completeness that this is in fact the summit picture. But this picture was taken at the summit! So peaceful, no nice. As it was already around 4’o clock nobody else was around. You could stay here for quite a while.

Brissago looked far away. So the pause on the top was rather short. The following picture is showing the Pizzo Leone. On the way down I was constantly checking for nice places to camp. And there were many.  Maybe another time, in another life. 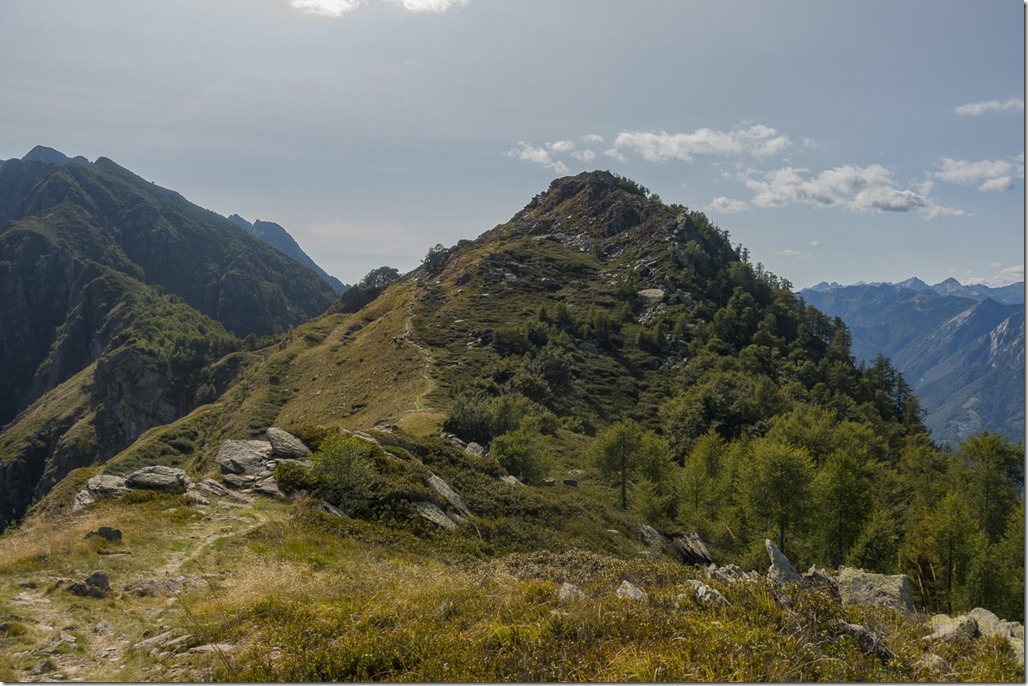 They obviously have problems to express their happiness through all the hairs but they were very calm and didn’t care about any hikers. 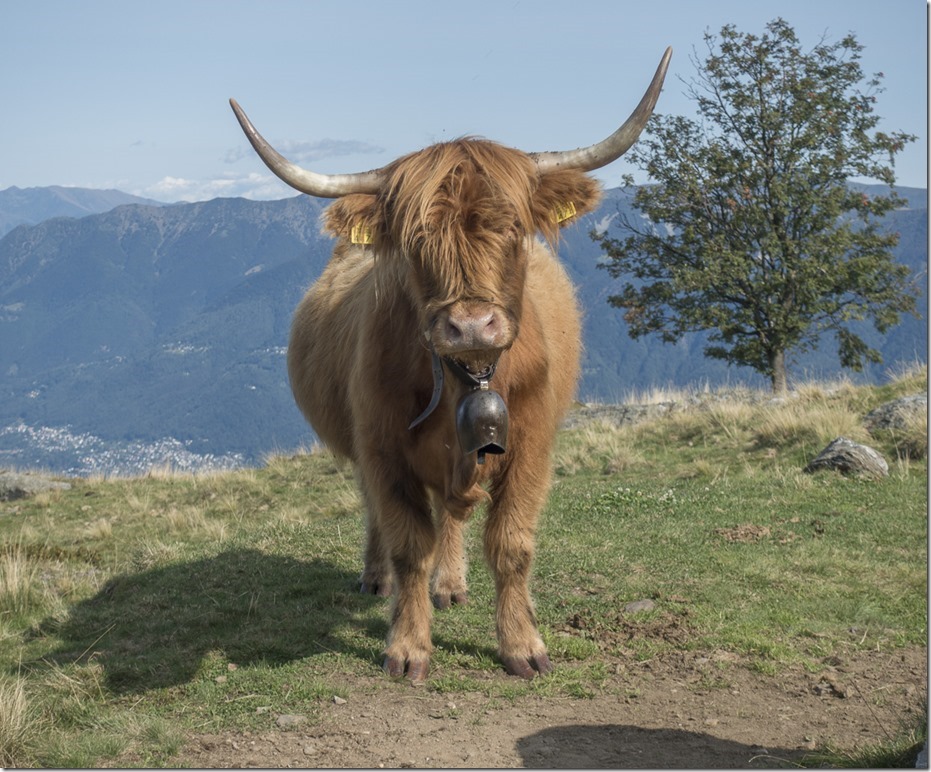 The youngster which was looking more like a big dog than a cow was trying to find a path through the high bushes. 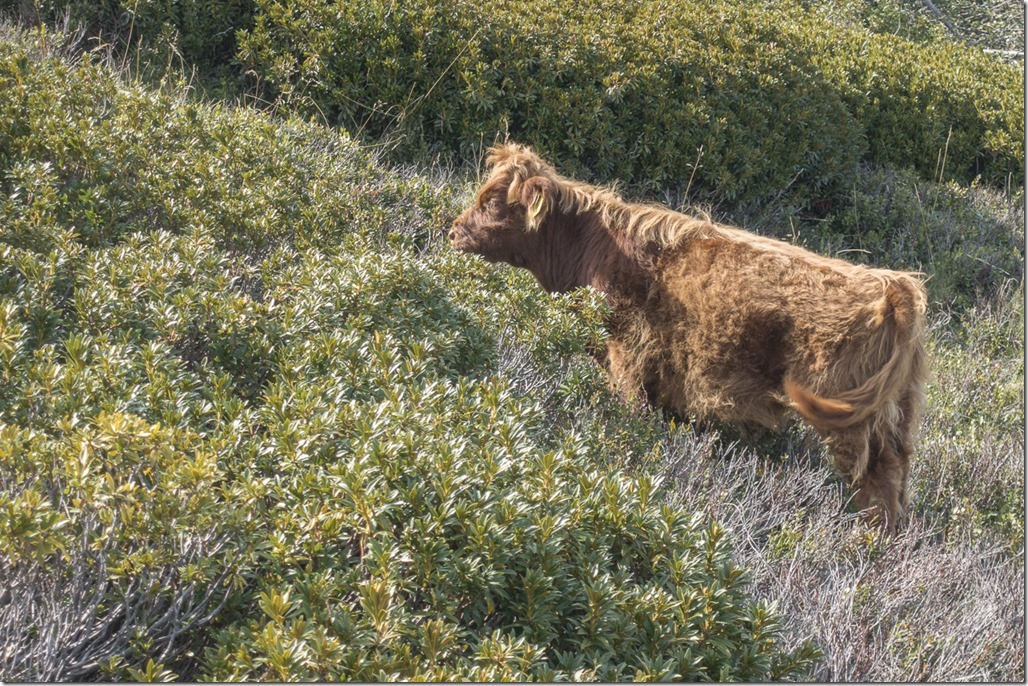 The way down was not following the shortest path to the lake. Instead it was carefully chosen to visit the “Gortto da Peo” for dinner. Just before reaching the Grotto I managed to get lost on some short-cut through the woods. Of course I would never admit that officially since I know how to read maps and this was all perfectly planed, spontaneously so to speak

. I had found this Grotto on Google Maps and the pictures looked rather promising. Reality was even better!

We arrived exactly at the right moment when there was still some sun around. Later when the sun was gone blankets were distributed amongst the guests. Usually in a place like this the view is nice but the food is average or vice versa. But in this case both the view and the food were amazing! We were ordering some huge chop of meat, risotto with mushrooms and spaghetti with garlic to share and of course a salad (for me). And I would say: Everybody was happy! At some point we figured out that the restaurant was only accepting cash and something in connection with IBAN which we did not really understand since nobody was speaking English or German. So we started to secretly count our cash… 40, 60, 90, 96 CHF… plus 10€. Damn this was getting close… Can we get another glass of wine or an espresso? Stuff this! Let’s first enjoy the dinner and then worry about the payment. There are worse places to go the the kitchen to do some washing.

After the dinner we still had 700m of altitude in front of us. What was not know at this point was the fact that most of those 700m were in fact stairs. Assuming that the average height of a step is 20 cm you get quite a number of steps… 3500. And it felt at least like 10 times more. I also had to accept the fact that my long legs are just too slow for the 1-step-at-the-time technique so I occasionally switched back to the 2 step method which looked as weird as a giraffe running. But I had to do it in order to not fall behind too much. I didn’t mention the fact that we were actually running down, simply because it makes more fun.

As we were approaching the lake the sun was already setting in the east. Thanks to the running we didn’t miss the bus which is on hourly schedule only. Yeah, I know. Another picture of the island… Sorry! 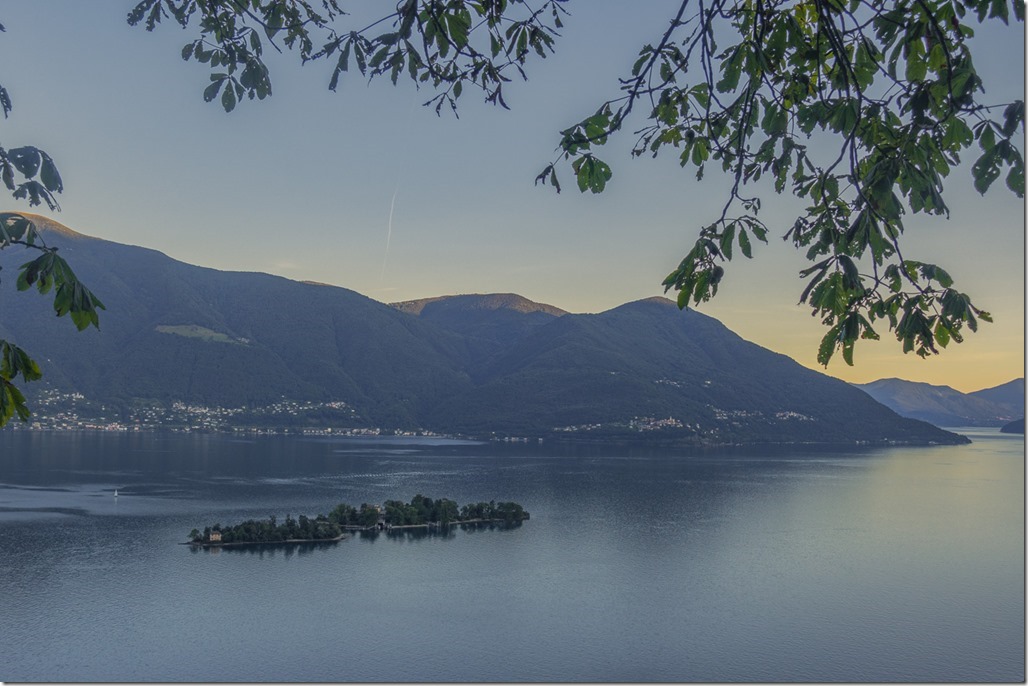 Today has proven once again that a enjoyable day is not depending on some crazy T6 trail or a new speed record but rather on the scenery, the attitude and the nice party!