As it was going to be the last day of the week with nice weather I called it a day very early and headed to the Wägitaler Lake. Wägitaler Lake? Yeah, nobody will know. It is a small lake and is reachable from Zurich by car in 45 minutes. It is surrounded by mountains of 2000 meters or a little bit more. So we are talking about real mountains and not any more about hills. To one of those mountains there is a track called “Brenna Track”. No idea why it is called like that. I just know that it is steep, very steep. It has an average steepness of 81% which means on a horizontal distance of 650 meters you are gaining 530 meters of altitude. This track was the target of today. The path to the starting point of the track was easy. The weather was nice and not too hot. Perfect conditions I would say. While approaching the Schiberg you could already get a glimpse of the “Brenna Track”. However this is usually not a good indication as many tracks look super scary from far away and when you are close it is kind of ok. At the base of the mountain there war a very nice small hut which seems to be operated only on weekends as nobody was there. It looks like this hut is used by climbers as their base in order to go climbing on the mountain on the other side. “Mh, I think I am going to skip this one as I am not a good climber and you definitely need serious climbing gear for that one” … The beginning of my route was just behind the hut. I would consider it a very good “filter” for potential hikers as if you are not managing it easily you should better turn around. More more of this will follow further up. The following picture was taking on my way down, on the way up it was still very sunny. 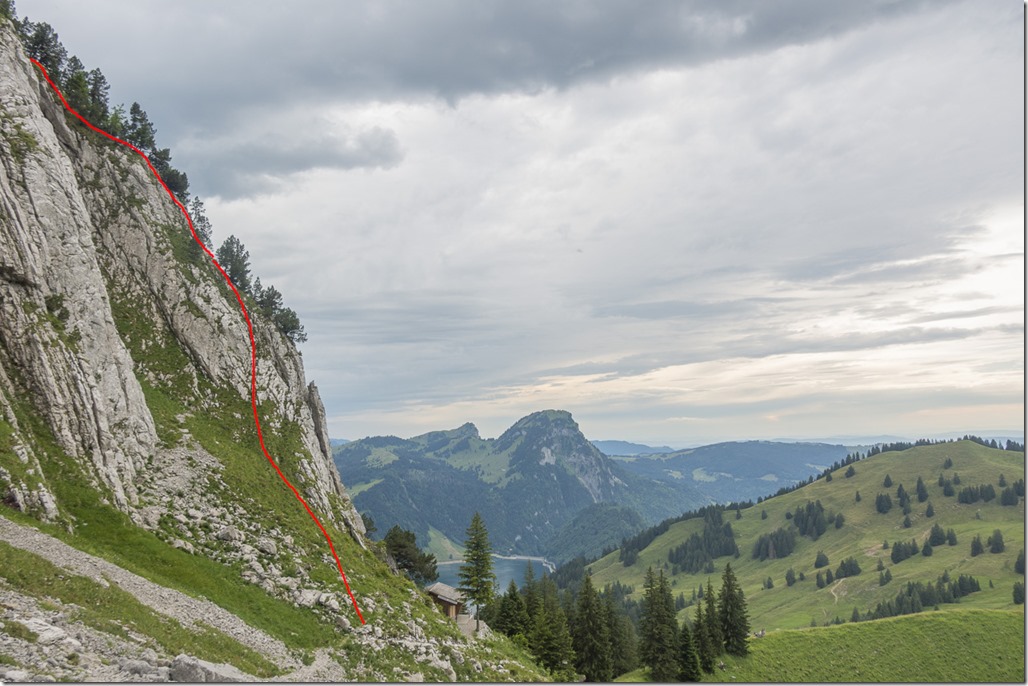 Just when I wanted to start going up I saw somebody coming down! Seriously down?! If up is difficult, coming down the same way is usually even more difficult. When I started to chat with him he told me that we nearly went to the top before returning. There is a place where you need to get down pretty vertical for like 5 meters. And he was afraid of doing that. “Good, I have a rope with me”, I thought. And then there were his arms which were covered with rather big streams of dried blood. I asked him if he had fallen but he denied it and said that he got the scratches from the thick vegetation.

After having completed to tour I have to add that on the mentioned section where you need to go down there is actually a pre-installed rope which you can use to simplify the task. So my conclusion is that he probably went off the track and ended up somewhere we you really can’t go down … As I mentioned earlier, when you are getting closer to something it looks much easier. And up we went! Looking down to the first section. I was happy to find very good solid rock with lots of possibilities to hold. The first part of the track goes through forest. This has a couple advantages: You can use the trees and roots as handles and you don’t see how steep it actually is. Looking down. Already up quite a bit. In many places you can find blue arrows indicating the proper direction. Of course it went up all the time. This section is considered as one of the more tricky ones. As I managed to get through without any issues I was pretty confident that I would reach the top. After reaching the tree line the view was much better. The whole track is following some kind of ridge but now you could actually see it. 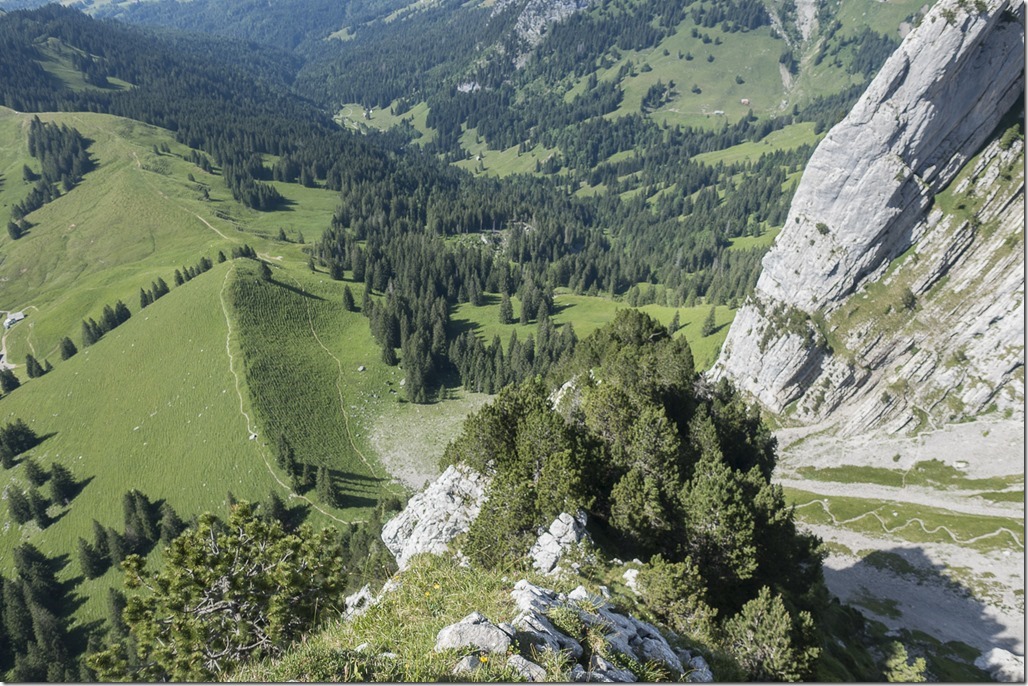 Panorama with the Wägitaler Lake and some parts of the Züri Lake in the middle of the picture.

The upper part of the Schiberg. Looking at this there are many possibilities to get up but since it was my first time here I followed the “official” track and didn’t do any experiments. 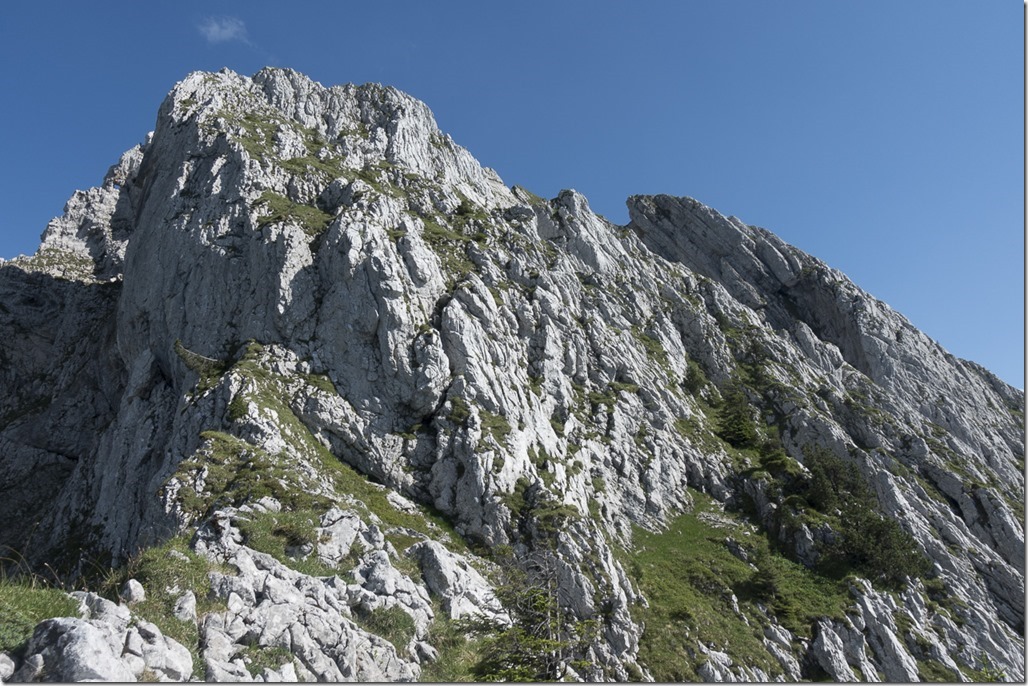 Following the track was easy as whenever you could get lost, there was a blue arrow. At some point I had a problem. The problem was that I had to join a telco. And what do you do when you are on a mountain and have to join a phone conference? You just join it! I dialled-in, put the phone into the pocket of my shirt and continued on the way up. Unfortunately I was dropping out of the conference all the time even though I had good 4G signal. After rebooting the phone twice without an improvement I gave up. Stupid Skype … At some point I reached the location where you have to go down a couple of meters. I managed to get through this even without the help of the rope. I am very proud of myself Looking back to that section. I was coming of on the ridge to the right and in the middle went down. Panorama from the top. The Züri Lake is now clearly visible on the right side. You can already see more clouds in the sky. The wind was getting stronger and the temperature was dropping. It looked like some thunderstorms coming up. Initially I had planed to also visit below mountain but when I saw the weather I decided to head straight to the car. For the way down I was going on the official hiking trail. So I could push somehow on the speed. Family “Murmeltier” watched me going down. Speeding up my return was really required. By now it was already pretty dark from the clouds, from time to time you could see lightning over the mountains and you could also hear distant thunder. There were quite a number of houses on the way down which I could have used as shelter in case the thunderstorm was hitting me.

I did this screen shot of my mobile when I reached the car. You can see my position as the red dot and the rain/thunderstorm is already pretty close. I would call this “good timing”. More or less the same picture, when I left for the hike. and when I returned. Quite a difference. This hike was super fun and definitely makes it into my top list. For the view there are much better ones but the trail itself is very nice and rewarding. And it is not short as you have 500 vertical meters to go up. Pretty much like Haggenspitz but just better.

Disclaimer: Don’t even think about trying this if you don’t have experience with similar tracks. And if you that experience you probably already have done the “Brenna Route”.