Ruchen – One sunrise and 3 mountains

This weekend I was going to my hut in Arni in order to dodge any potential heat wave in Zurich and of course to also relax. I also wanted to do some hiking. Since the heat in the last days has removed quite some snow in the mountains anything should be possible by now. So I planed to continue on my “project” to do all the mountains on the right side of the Leutschach valley in one hike. The first two, Ruchälplistock and Jakobiger, are very well accessible as there is an officially maintained blue-white-blue alpine hiking trail. Any difficult section of that trail is secured by ropes. Eeeeeaaaaaasy!

However after those two mountains it gets tricky. There is no hiking trail. So you need to figure out the path yourself. The next mountain would be Chapferplanggenstock. I read somewhere on the Internet, that it is not accessible for hikers. So the plan was to skip it and directly head to the next one, the Ruchen. The Ruchen is my nemesis as I already tried to reach it 2 times from the other side. On the first attempt I thought that I had reached the top, just to discover at home when checking the gps track that I just reached another nameless mountain next to it. On the second try I was stopped by a nearly vertical wall of 6 meters which looked doable on the way up but I wasn’t sure if I would manage to get down again. Today I would be approaching the Ruchen from the other side. On the way down was the mentioned vertical wall but this time I had my emergency rope with me so I could use it if I would get stuck. The last mountain in the chain is the Mäntliser. No hiking trail either. I was up on the Mäntliser last year from the opposite side. For my project I would have to climb the Mäntliser from Ruchen’s side which basically is a ridge which gets steeper the higher you get. Let’s see how far we get … 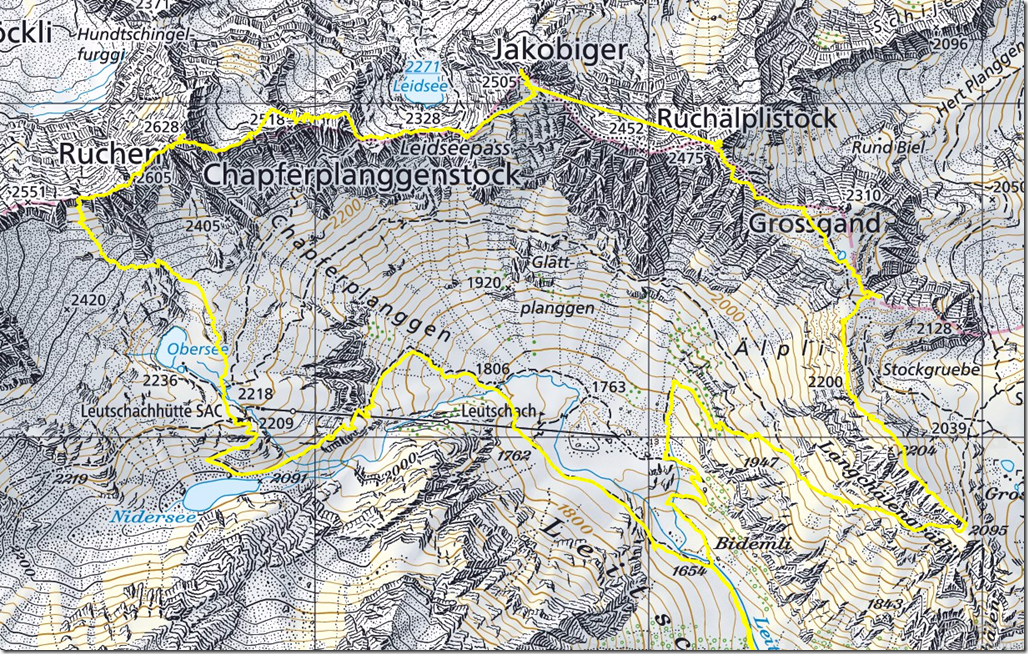 The initial idea was to camp&hike meaning I would sleep somewhere on the way to the first mountain in my sleeping bag. As the weather forecast mentioned some possibility of thunderstorm I decided to sleep in the hut and do a real early start. Early start in this context means leaving at 3am. If walking fast I would be on top of the first mountain by sunrise. But I decided to take it easy and try again the full “Langchällen” Ridge which I managed to do for the first time on my last hike to Ruchälplistock. I also works without snow so this is my new official trail to Ruchälplistock.

While I was hiking on the ridge the sky started to change its colors. 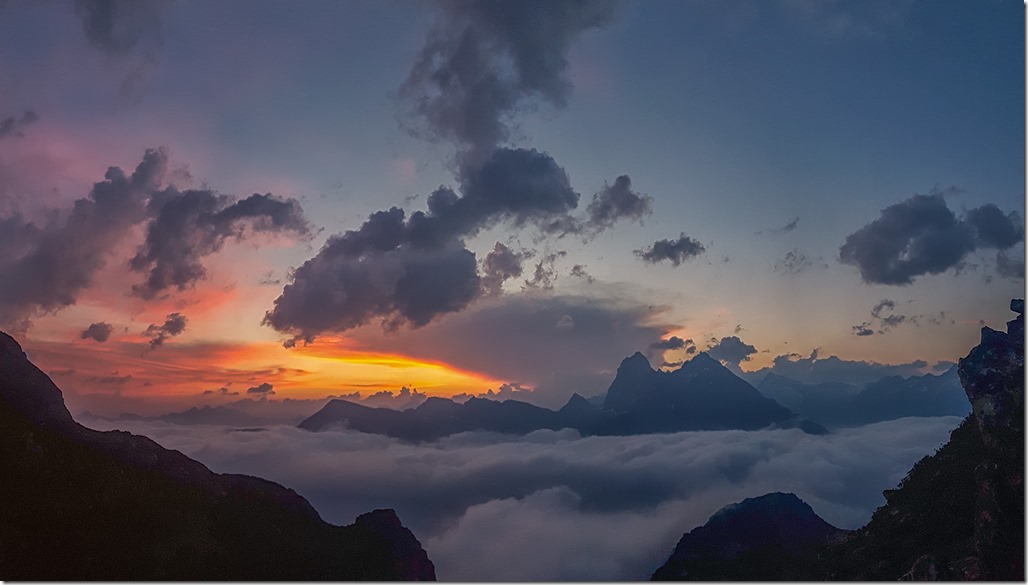 What made the whole scene even more dramatic was the fact that the clouds were stuck in the valleys. It looked like a lake.

Panorama from a higher position where I stopped in order to watch sunrise.

As the sun was close to the horizon you could see the rays. 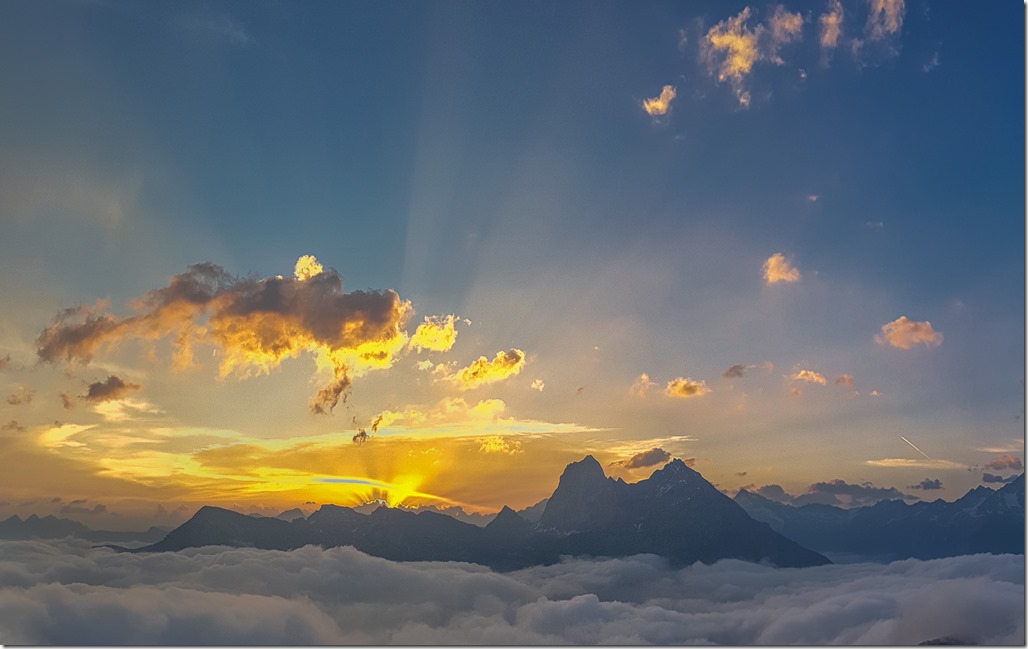 An then there was the sunrise. Wow! Amazing! I have been up here quite a number of times but this one I would rate as one of the best. 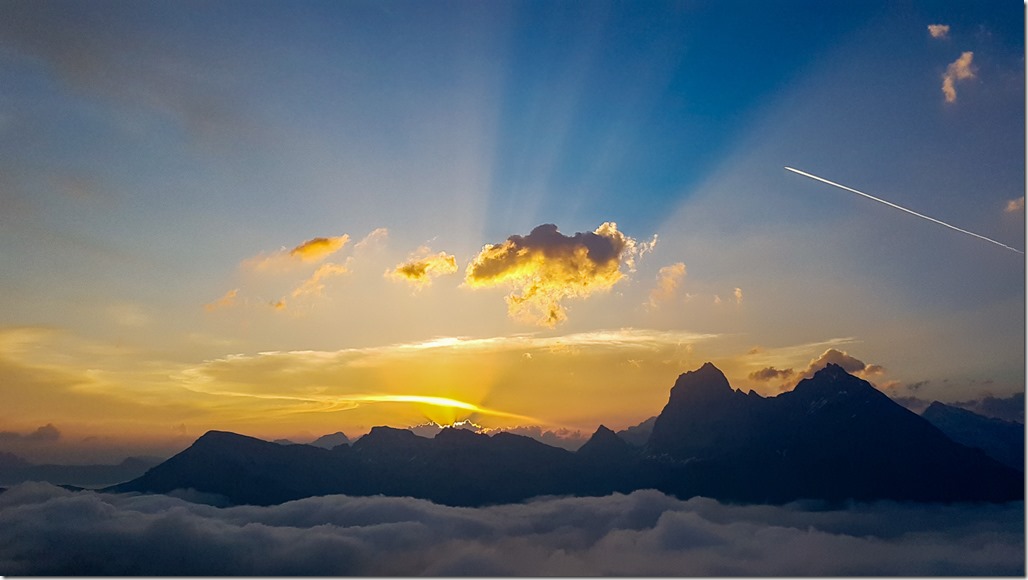 View to the opposite side into the Leutschach Valley. The sun which was just above the horizon was giving a very soft light on the mountains. Unfortunately the following photo is not half as good as reality. You need to experience it with your own eyes. 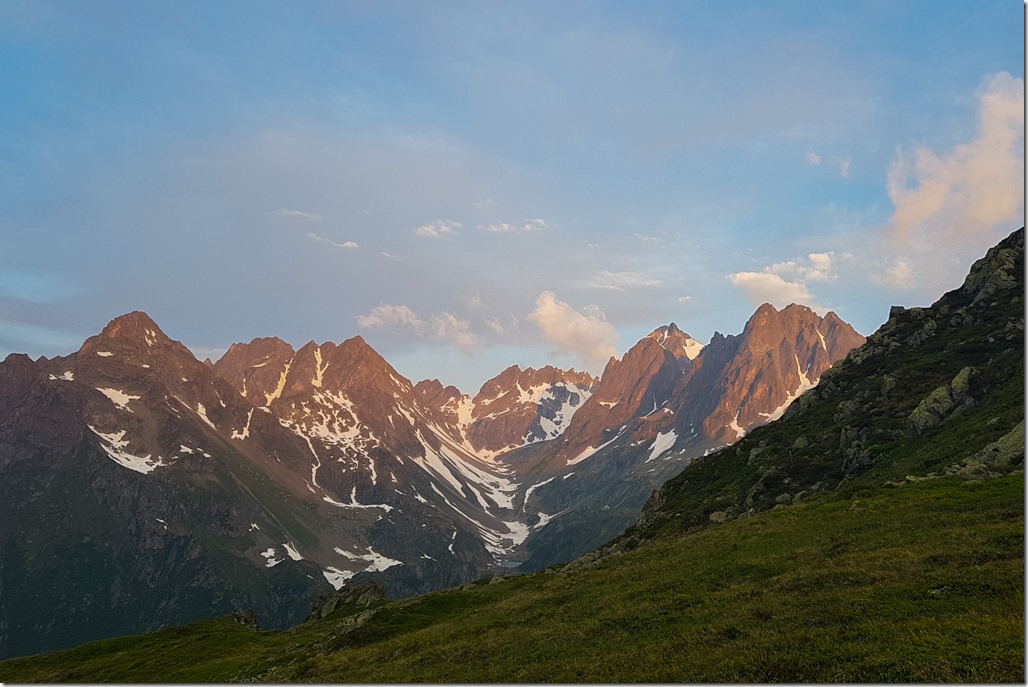 Today I tried a couple of new short-cuts on the way up to the first mountain. As all of them could cause rock fall onto the official track I don’t consider them feasible during the day. By the time I reached the summit the sun was already well above the horizon. Again amazing experience!

I would describe the feeling similar as when you are in a plane and it is flying close above the clouds. The only difference is that I have unlimited space here, can breath fresh air and enjoy the view as long as I want. 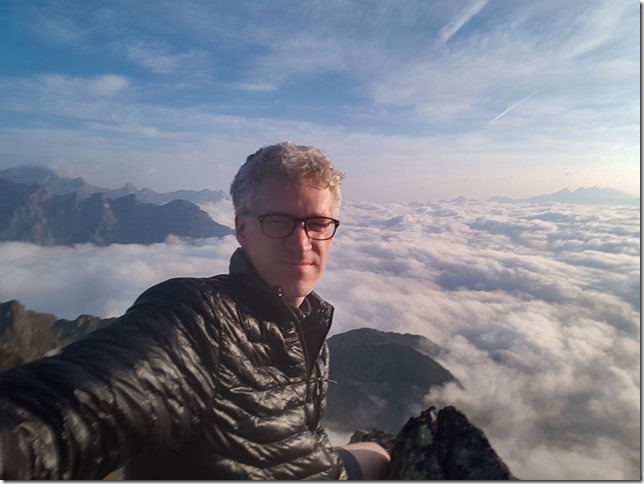 The clouds were staying for the whole day but the sunlight was causing some disturbance later on. Poor guys down in the valley. No sunshine. Sorry!

It was also quite amazing to see how some of the clouds were flowing over ridges of the mountains. The following picture looks back on my trail. It was basically following the ridge of the closer mountains. On the way down from the second mountain of the day, the Jakobiger, there is a small lake. As it is pretty much protected from sunlight by the surrounding mountains you can find ice in it until late in the year. 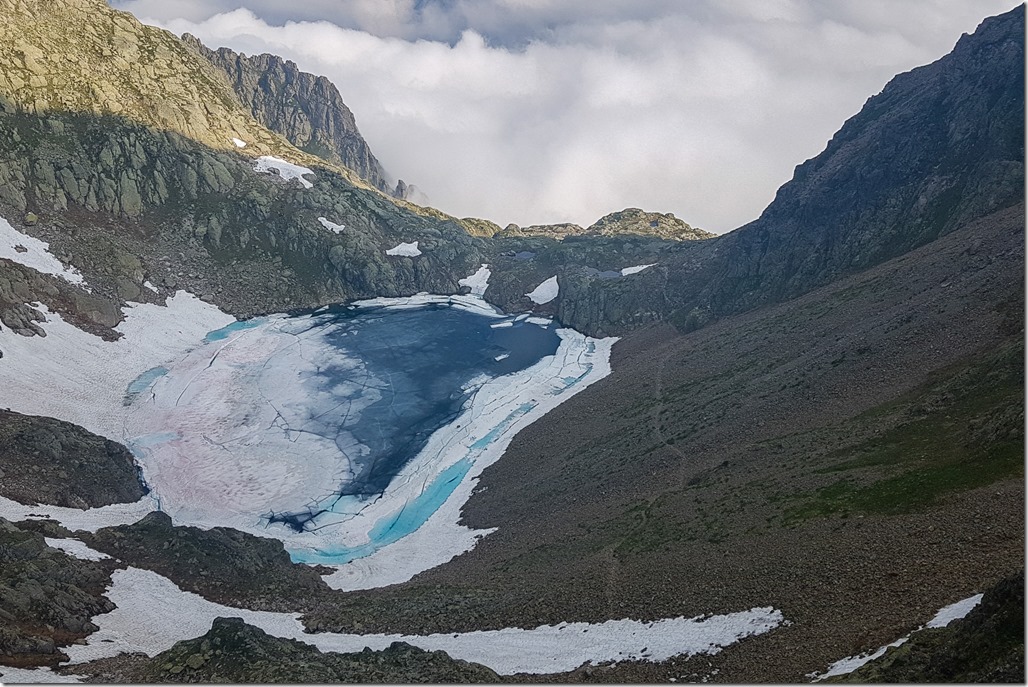 Now I was entering new territory. I had some kind of plan of how to proceed but the initial plan didn’t work out as there was a steep field of snow which I would have had to cross. Since I didn’t have crampons with me and I didn’t want to see myself sliding down on snow which had lots of sharp stones lying on the surface, I decided to take a more “aggressive” route alongside the mountain. Finally I picked the left one which was limiting the time on snow to a minimum. 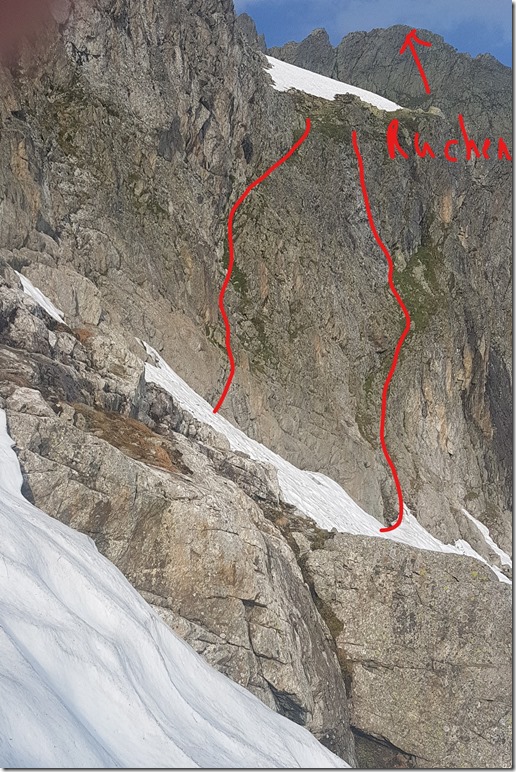 View down to the snow field. You can’t really see how steep the snow is from this angle. 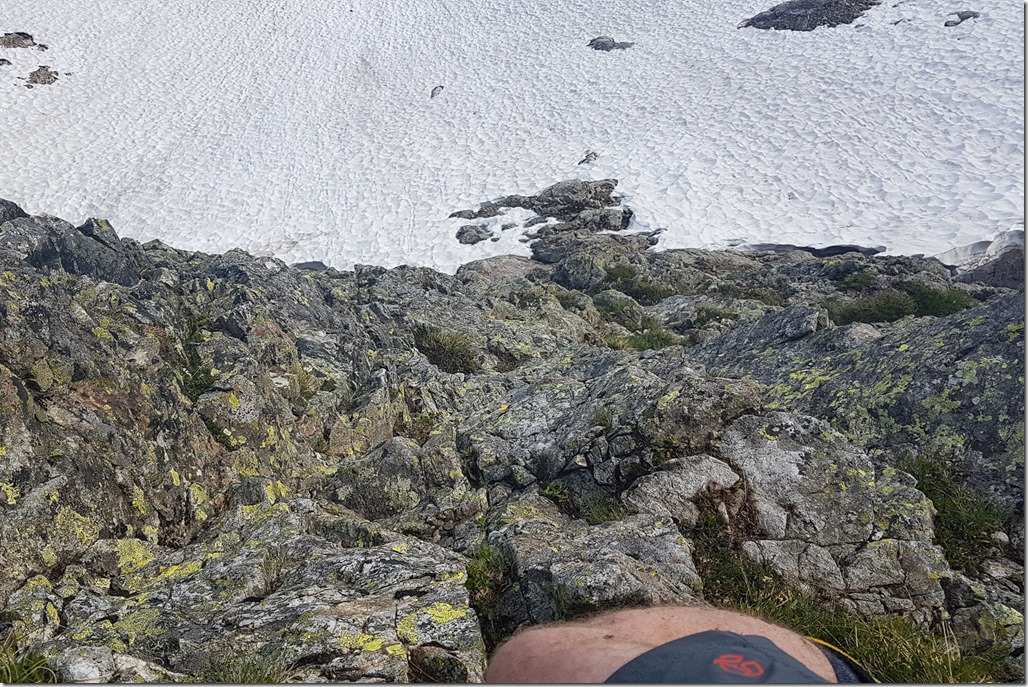 And the following photo is the view back. You can see the Jakobiger and Ruchälplistock. 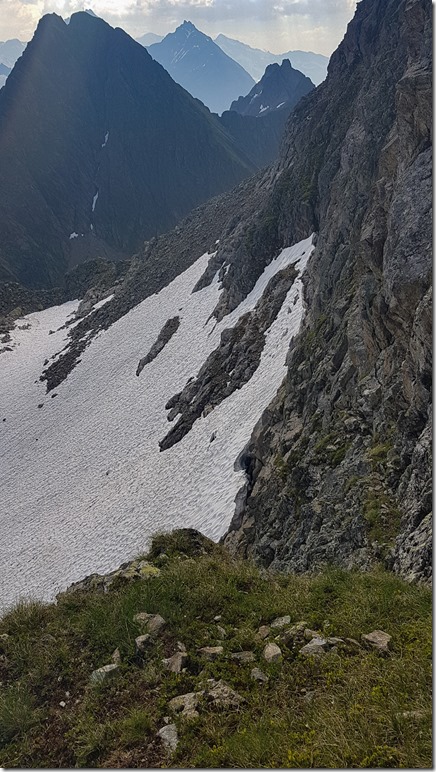 The Ruchen in front of me. The ridge to it isn’t too difficult but I made it more difficult than necessary by going unintentionally into the flanks twice. 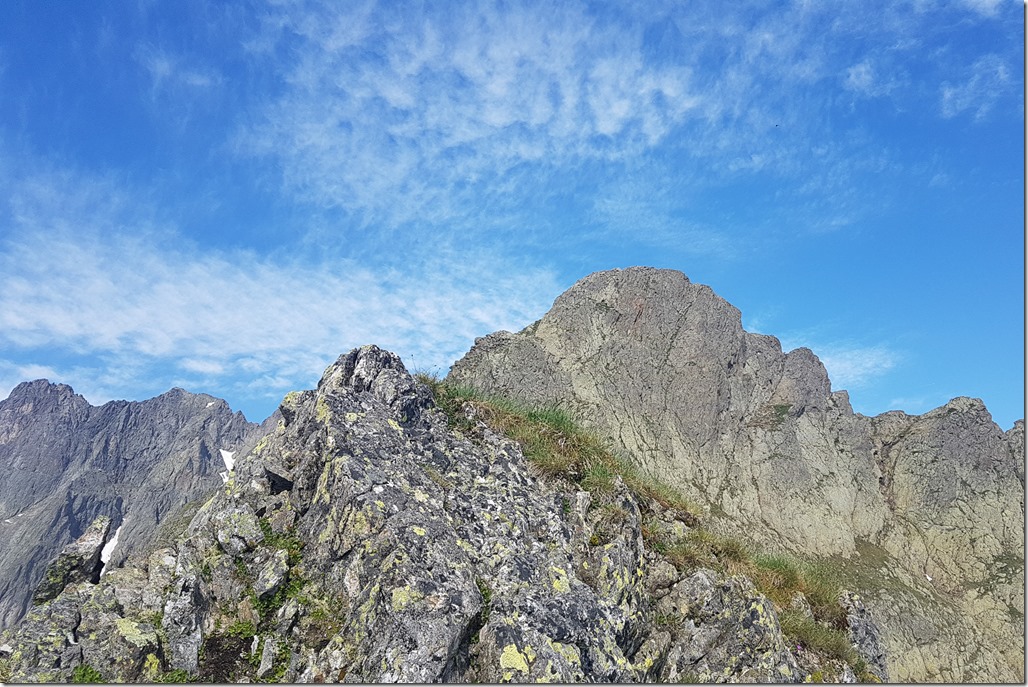 Selfie-Alert! Damn, the front camera of my phone sucks. Or maybe it is me. Or both. 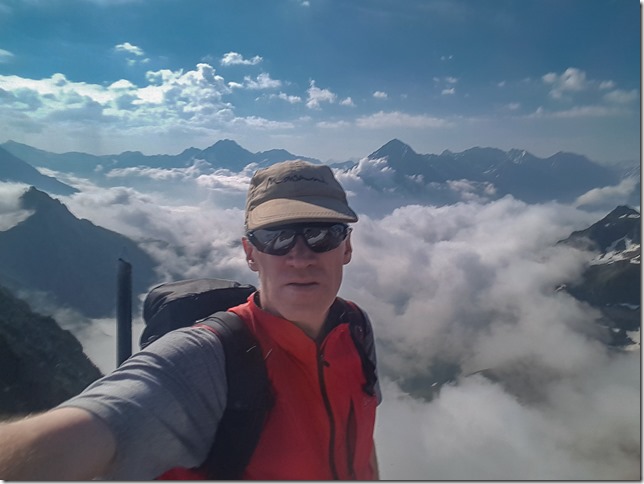 After reaching Ruchen I was pretty much interested in how the way down looks like. Because that was the section where I struggled before. Easy! Ok, not super easy but without problems. 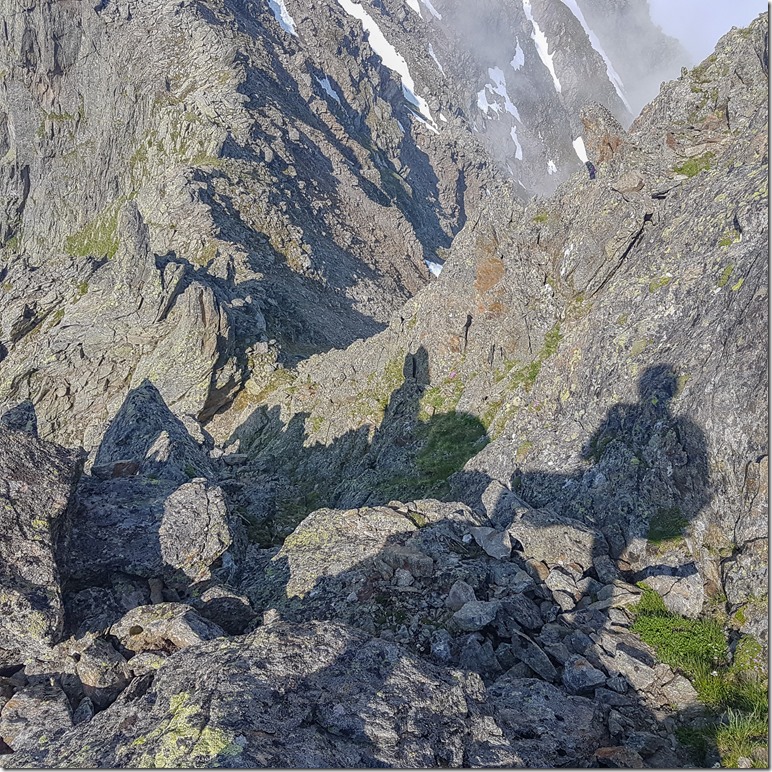 At this point I decided that I would not go for the last mountain, the Mäntliser. I wasn’t really tired but I was up since quite a while and the ridge to the top looks like you need to be in good shape and concentration. 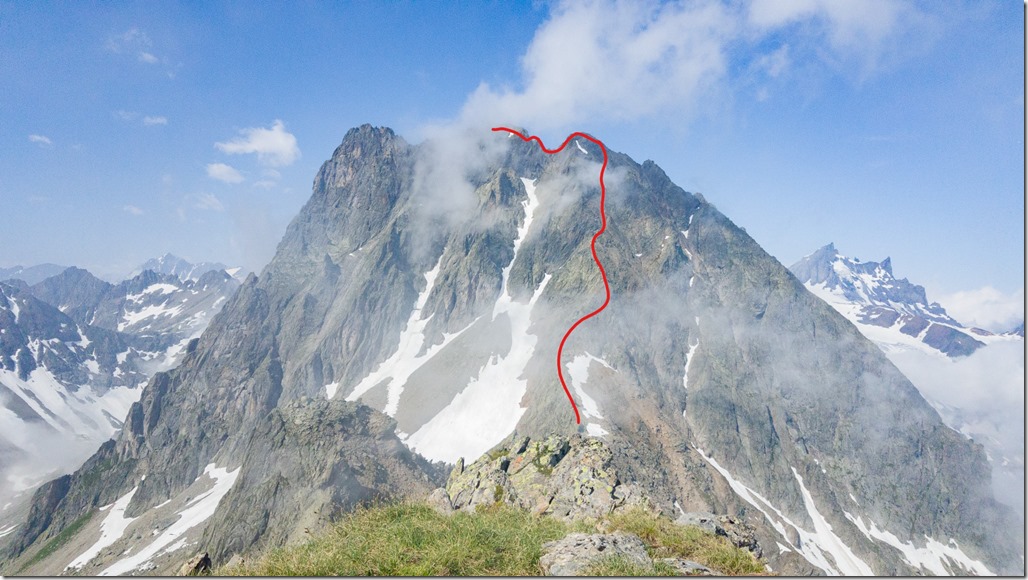 So I focused on other stuff on the way down. The daily dose of mountain flowers 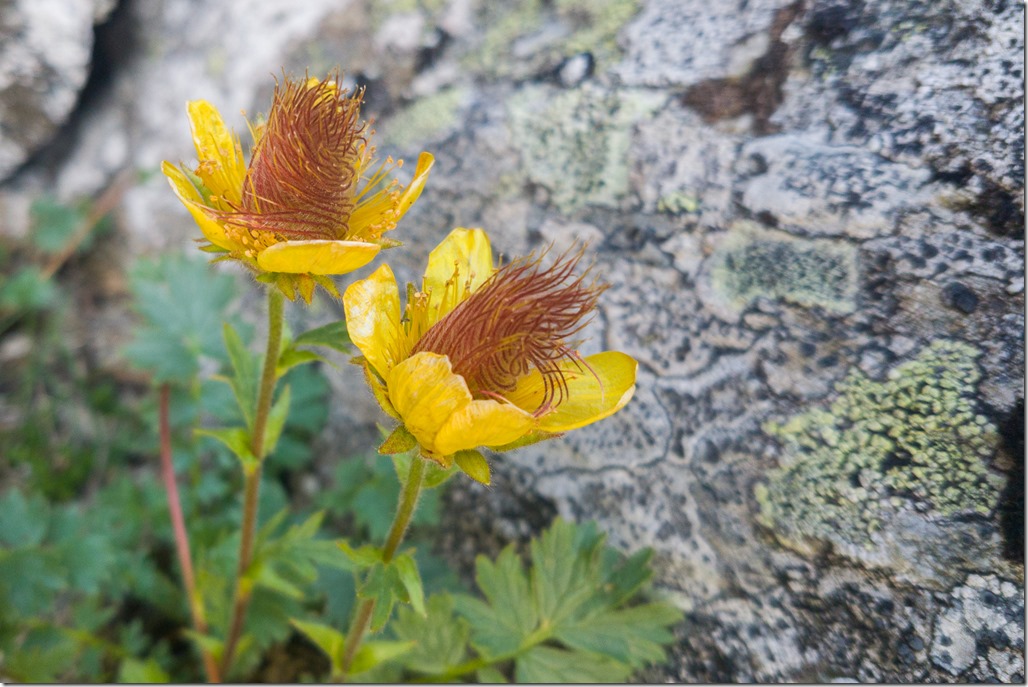 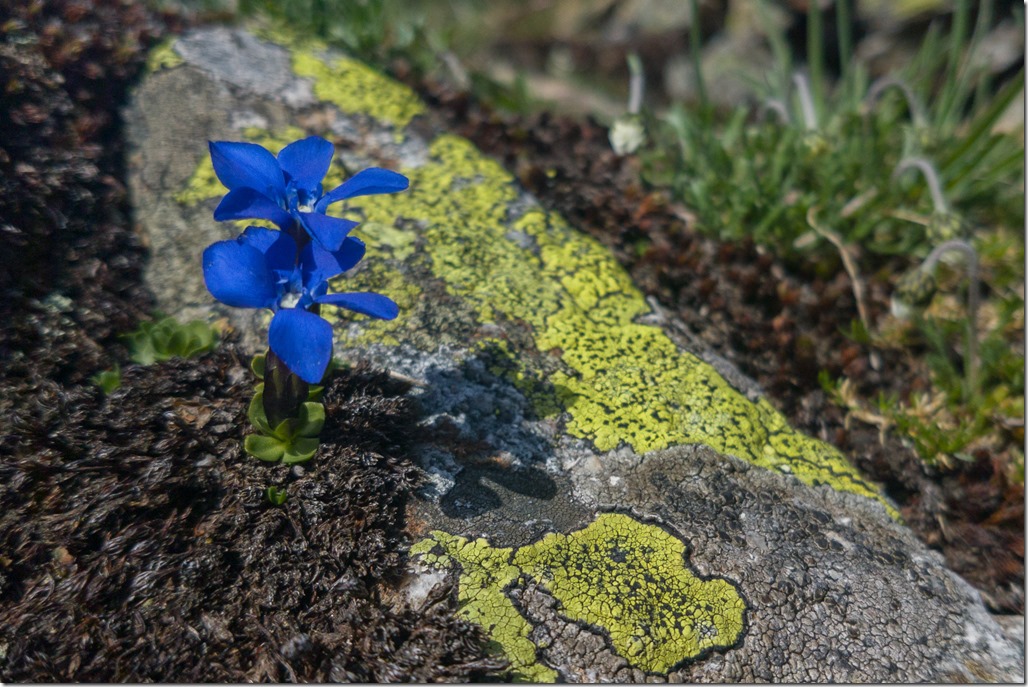 You can imaging that I was pretty hungry when back to my hut. After having some afternoon nap there was food, lot’s of, like 600 gr of meat … Cheers! 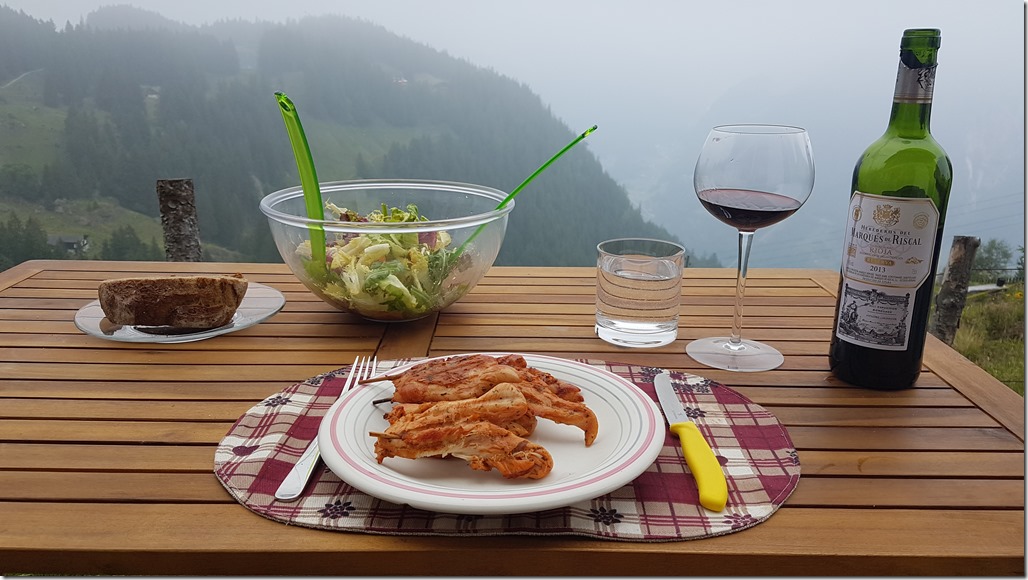