After my pretty long hike on the weekend my sport watch was telling me to take it easy for 37h. 37 hours? Seriously? I didn’t know that I am in such a bad shape. Ok, I have to admit that on Sunday my legs were rather tired. But regardless of my shape the recovery time is over now. So why not do something really easy tonight? As I still had one trail on Pilatus on my whish list the target for today’s late afternoon hike was quickly set. The trail is called “Alter Tomlisweg” and it is going from the Tomlishorn to Pilatus on a band of grass just below the rocks. As the official hiking trail is on the other side of the mountain I didn’t expect much “traffic” on my side. I only had to keep an eye on animals (Steinböcke und Gemse) and rocks falling from their movements. Time permitting I also decided to do a quick loop to the Esel mountain after reaching the top of Pilatus . Last time I did the Esel couple of weeks ago I got minimal grades for my climbing/hiking style which means I somehow reached the top. This time I will do better!

In order to make things more interesting I was looking for a track up to the Tomlishorn which was not an official hiking trail. Lucky for me I was able to find something on the map. Let’s just hope this is not another “jungle path” where you spend more energy to get through than to get up the hill. 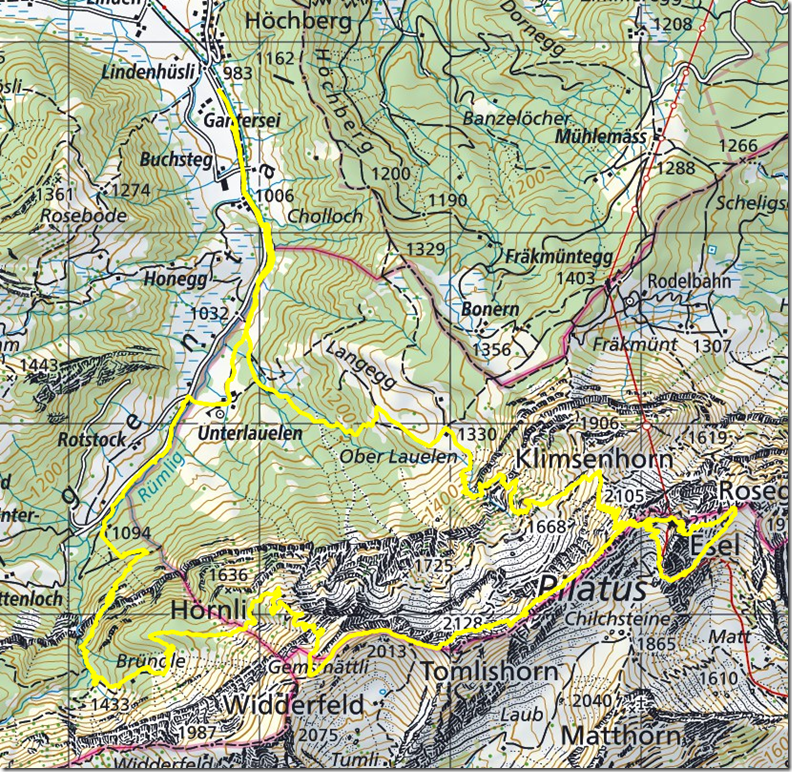 From the location where I parked my car most of the trail was already visible. Looks interesting. 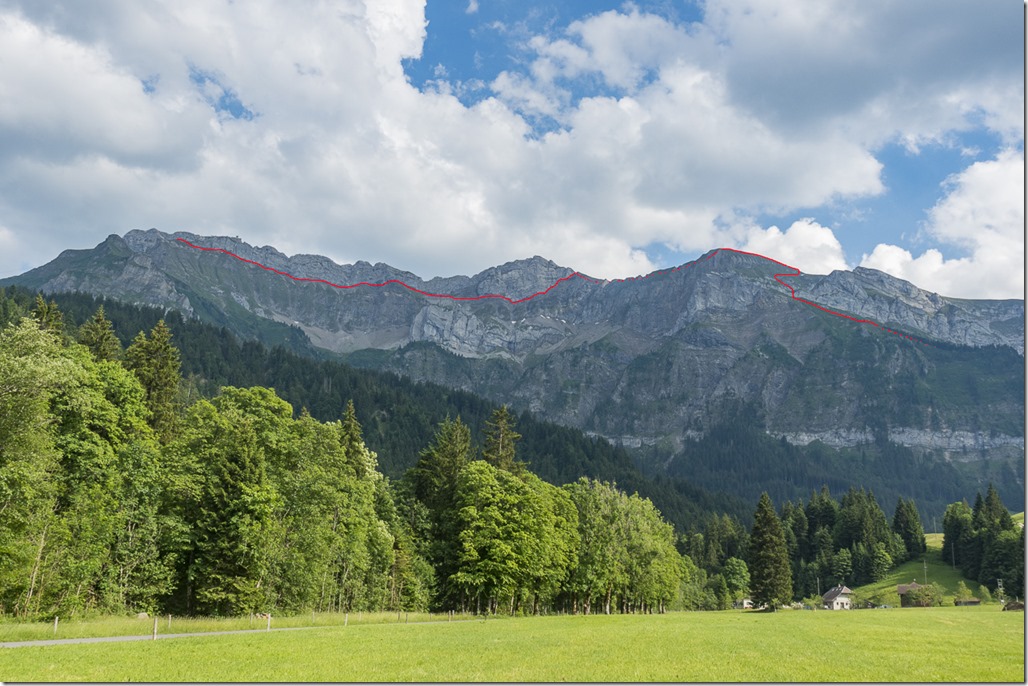 My super secret hiking trail was in very good condition. Obviously it is not just used once a year by some hunters but on a regular basis by ordinary folks. 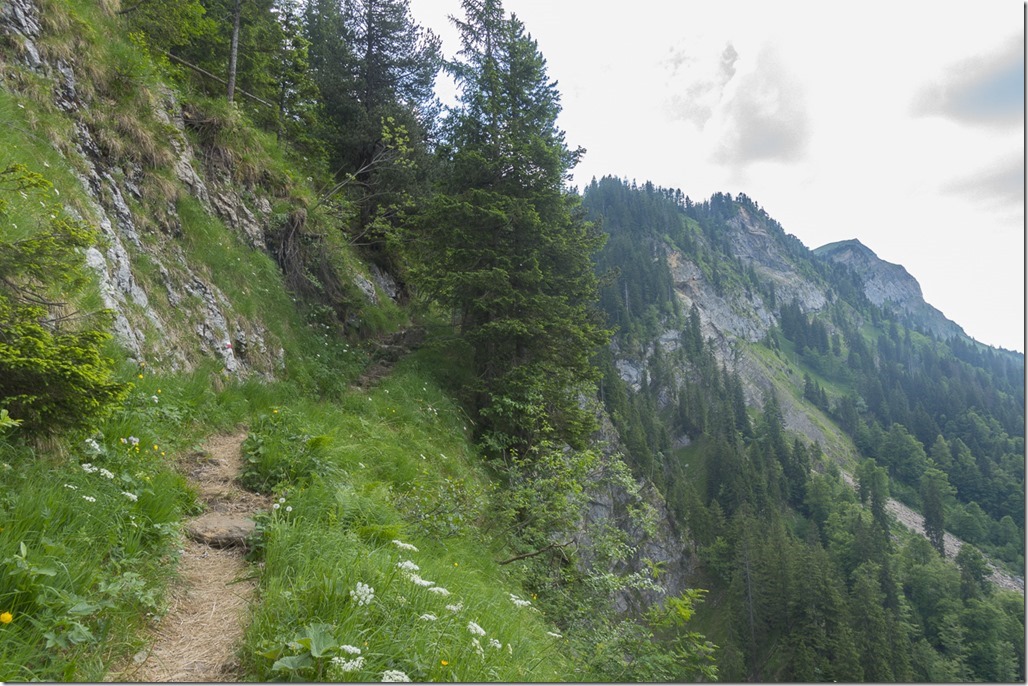 At some point there were even yellow marks to show the way through the top section of the trail. 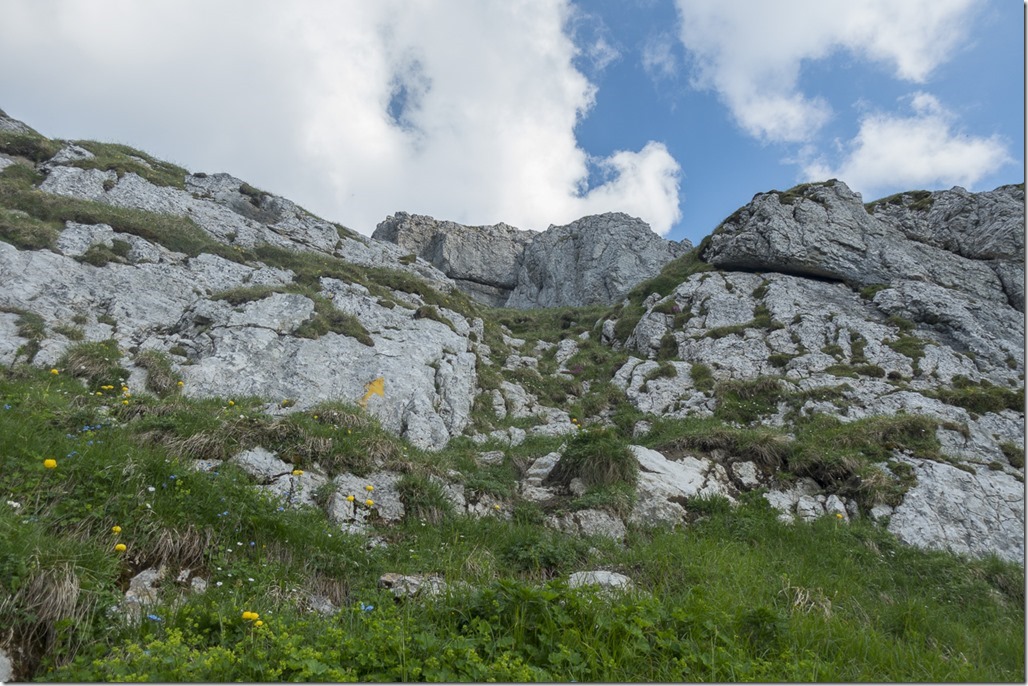 Once on the top I had to follow some time on the normal hiking trail to Pilatus. This one is also very nice and follows the ridge. The light was very unique with the sun getting closer to the horizon on the left.

I didn’t do much research on the internet about the Tomlisweg trail but I know that it was supposed to start anywhere here. So I was regularly checking the ridge for any sign of a trail. Nothing, except a more or less vertical drop. 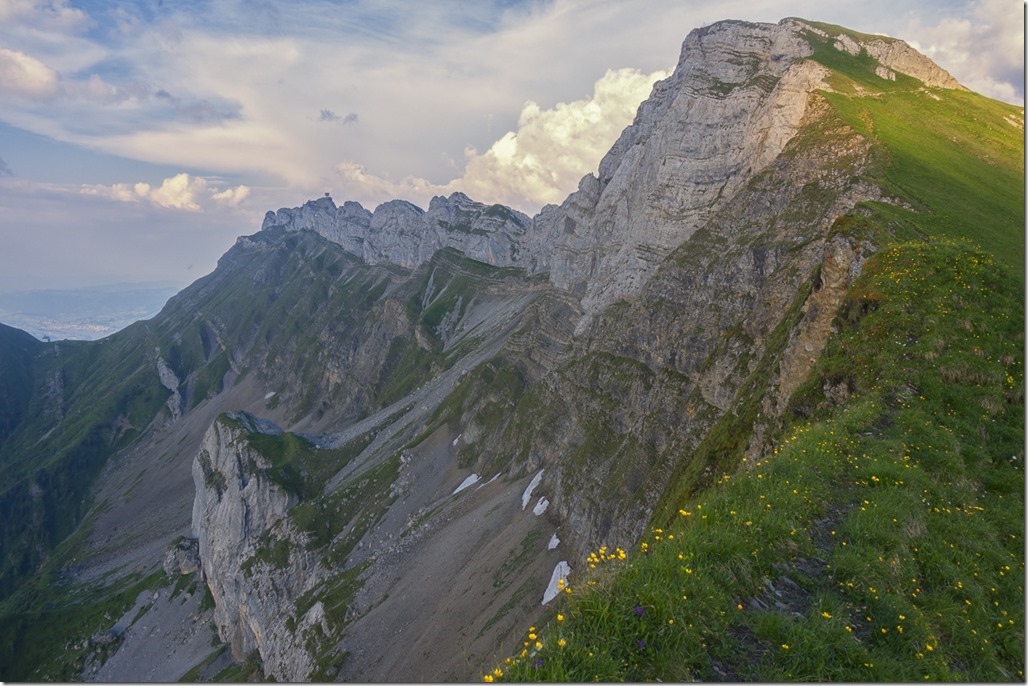 Finally I found the entry. This looked rather doable but you never know what’s around the corner … 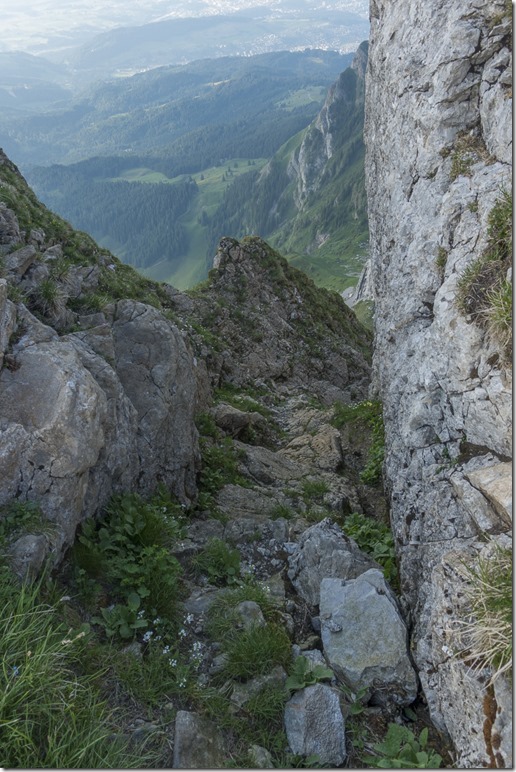 All the critical sections were secured with a rope to make it more accessible for Joe Average. I would have managed without – which would have been more fun – but the sun was setting in 1.5 h. So I could not spend too much time in this section. 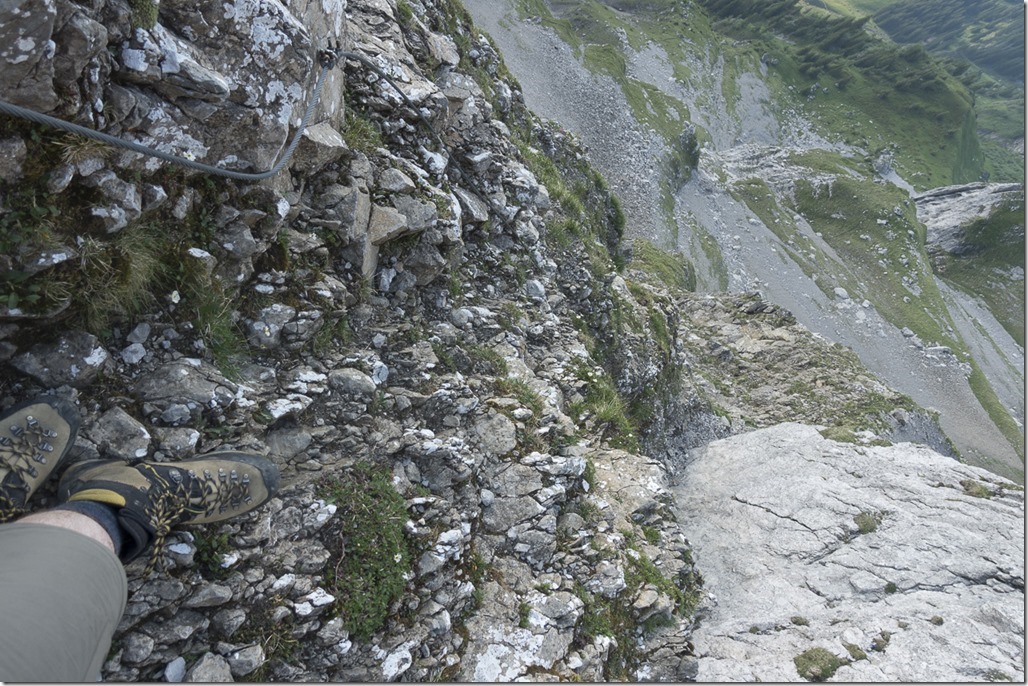 Overall the trail was easier than expected with not many steep sections. 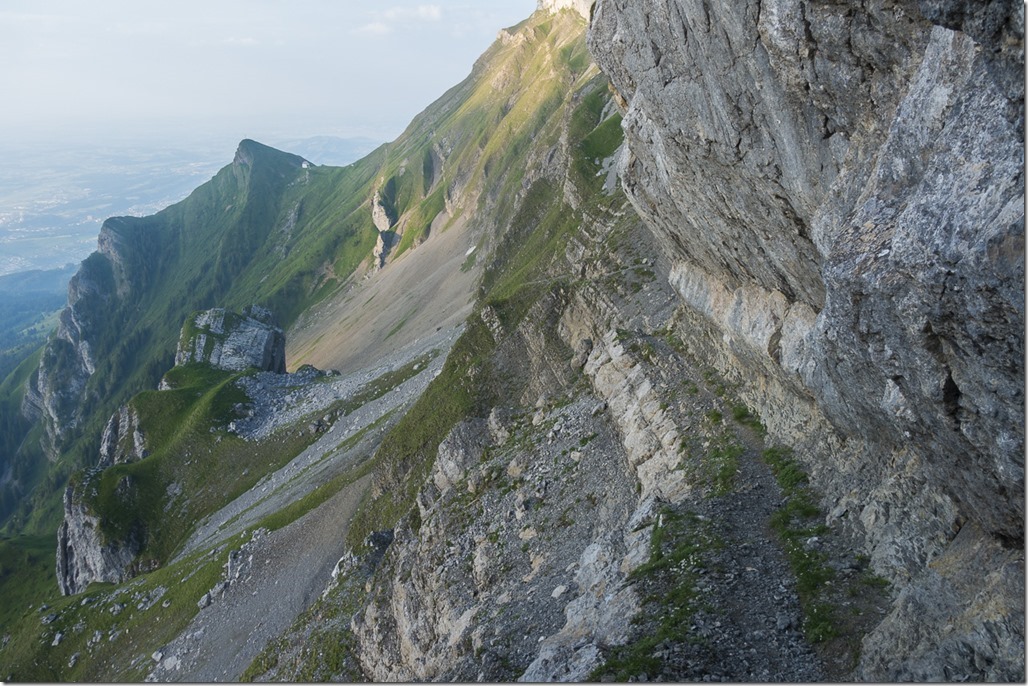 Looking back to the probably most tricky part, at least from my personal point of view. Going down, everything slightly tilted and quite some drop to your left. 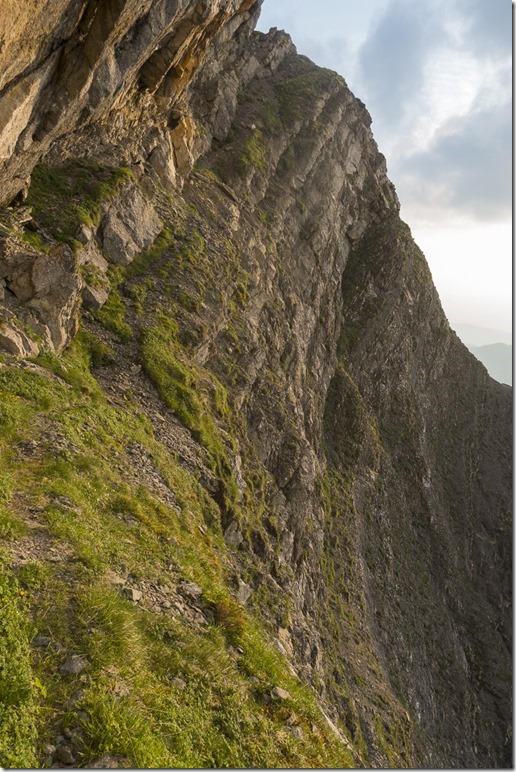 At this point the clearly visible trail was going down and there was no obvious way of how to continue close to the rocks. No, this can not be the end, I thought. It looks again pretty doable with no real steep cliffs to the left. Again, as I had sunset closing in, I didn’t have unlimited time to try out things. So I decided to continue until I would reach the visible grass section and could check how the situation is behind. There I would have to make a decision to abort or continue. 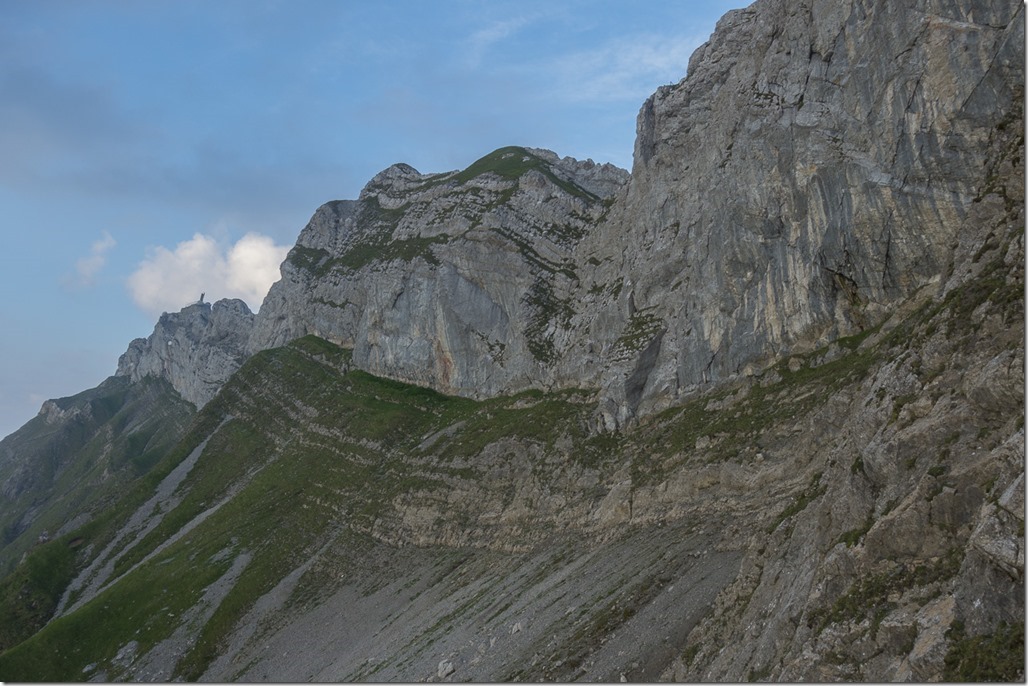 I reached that point easier and quicker than expected and everything to come looked perfectly fine. So let’s do this now!

The trail was more like a highway than a narrow mountain path. So I could focus on other stuff. By the way, there are many “Steinböcke” here. Unfortunately my little camera doesn’t have any meaningful zoom, so no pictures from them. 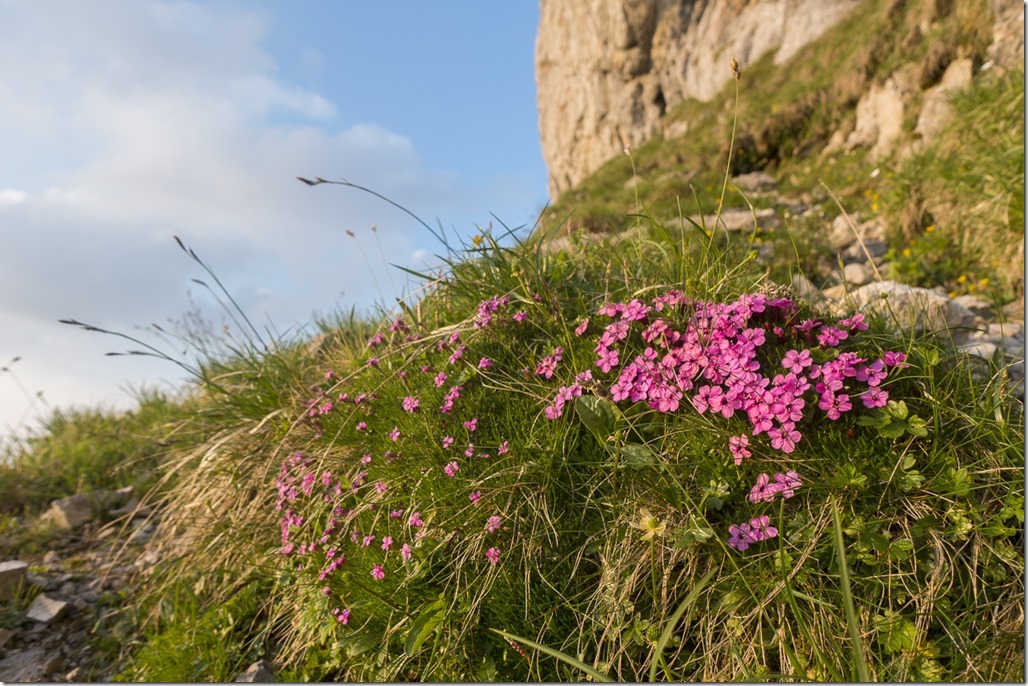 After reaching Pilatus I immediately continued with the Esel Loop. Still 45 minutes to go until sunset and I wanted to be back on the top by then. The following picture is looking back up to the buildings on Pilatus on the short descent around the Esel mountain.

I also tried out the service path next to the train to Pilatus. Not advisable as it has gaps big enough to fall down on the side if you don’t pay attention. Rather stay a couple of meters further down on the normal trail. 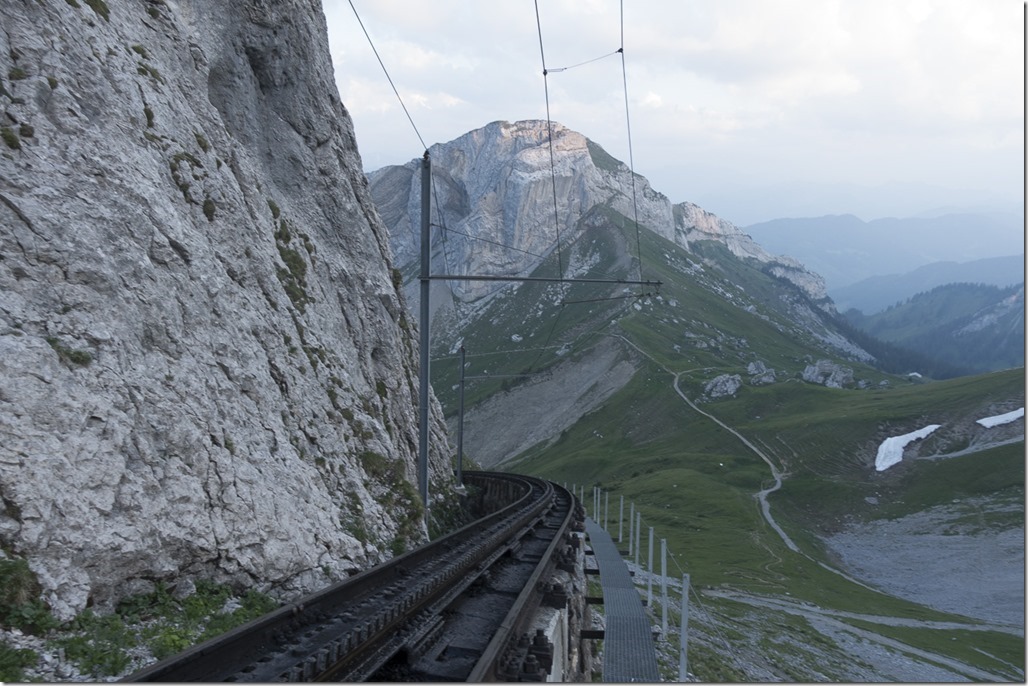 The sky was already getting colored by the setting sun. But now I had to focus on the steep way up the Esel. 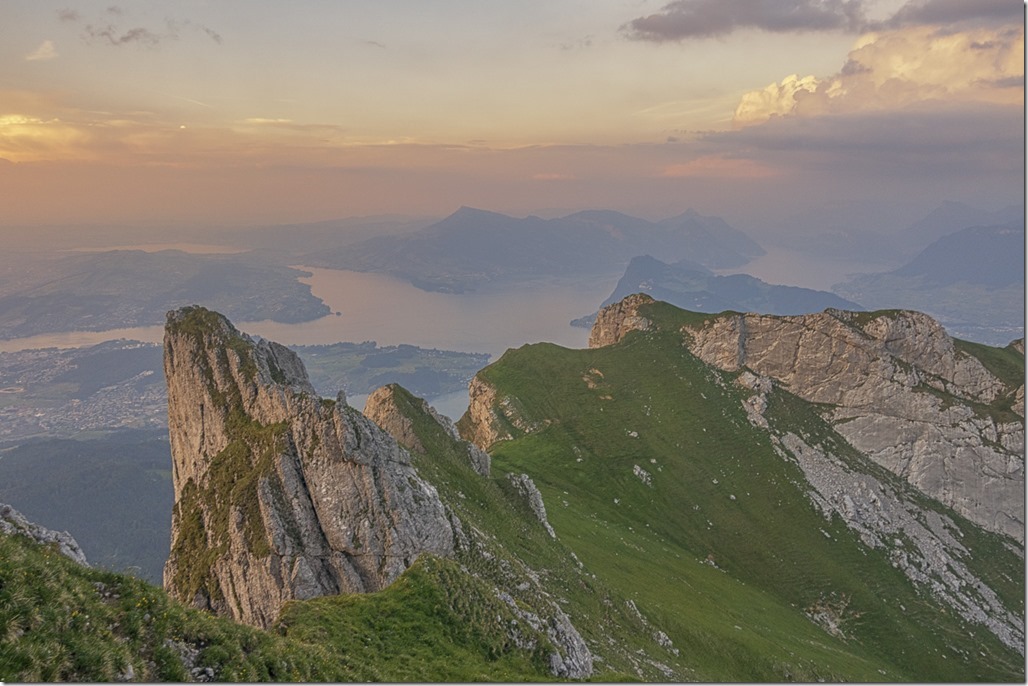 There are a couple of sections on the way up where it is highly advisable to not do a wrong step or slip. Gravitational forces would do bad things with you … But as the rock is very solid with many good places for you hands this is not a problem at all. 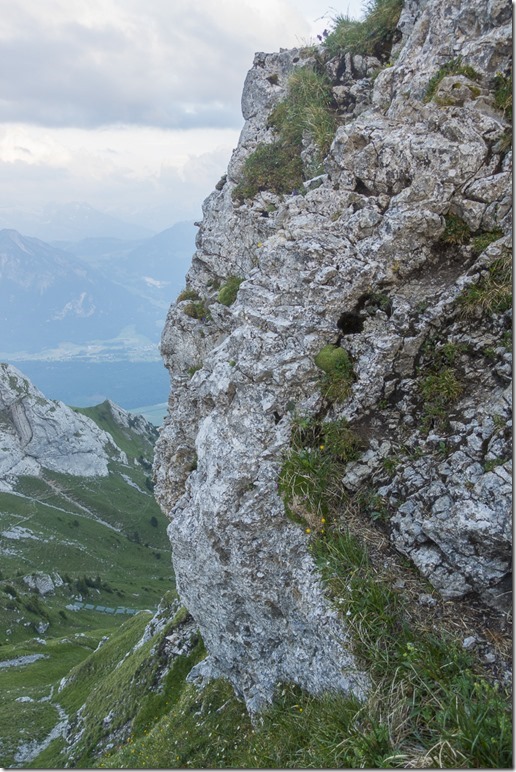 The last section near the top is where you have most air below your feet, maybe 30-50 meters  This time I even stopped to take some pictures. But again, the rocks are solid. SO if you focus on where you want to go and not on where you don’t want to go it’s easy. 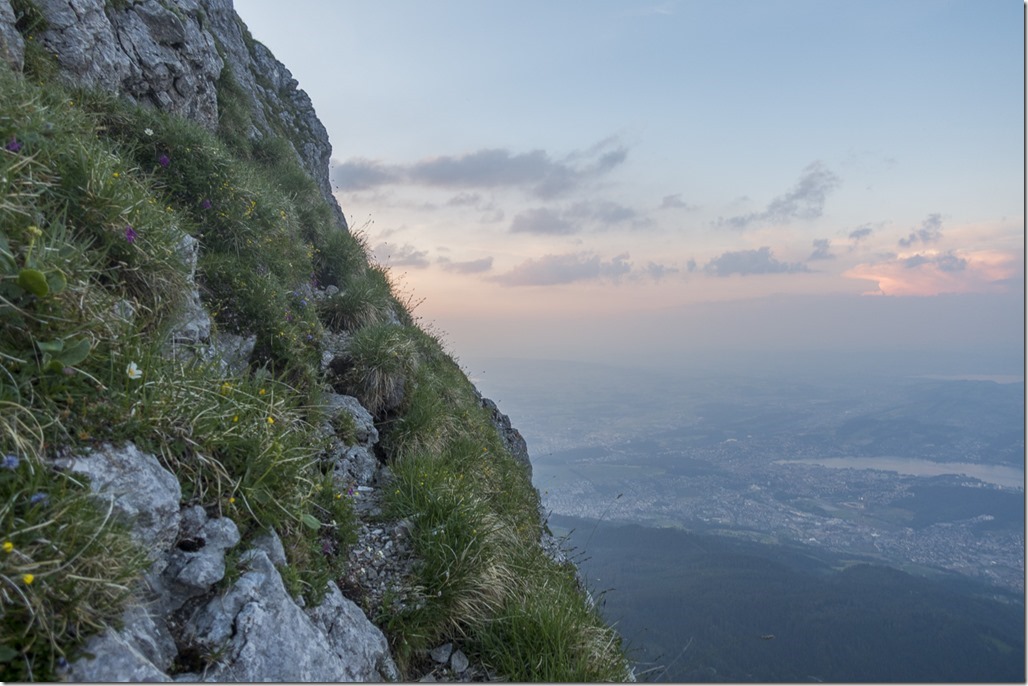 When I reached the top, the sun was about to set. Perfect timing I would say! And how are my scores for climbing on Esel? This time I would give myself descent grades. Pretty fast, found good solutions to all tricky sections, still room for improvement but much better than last time. 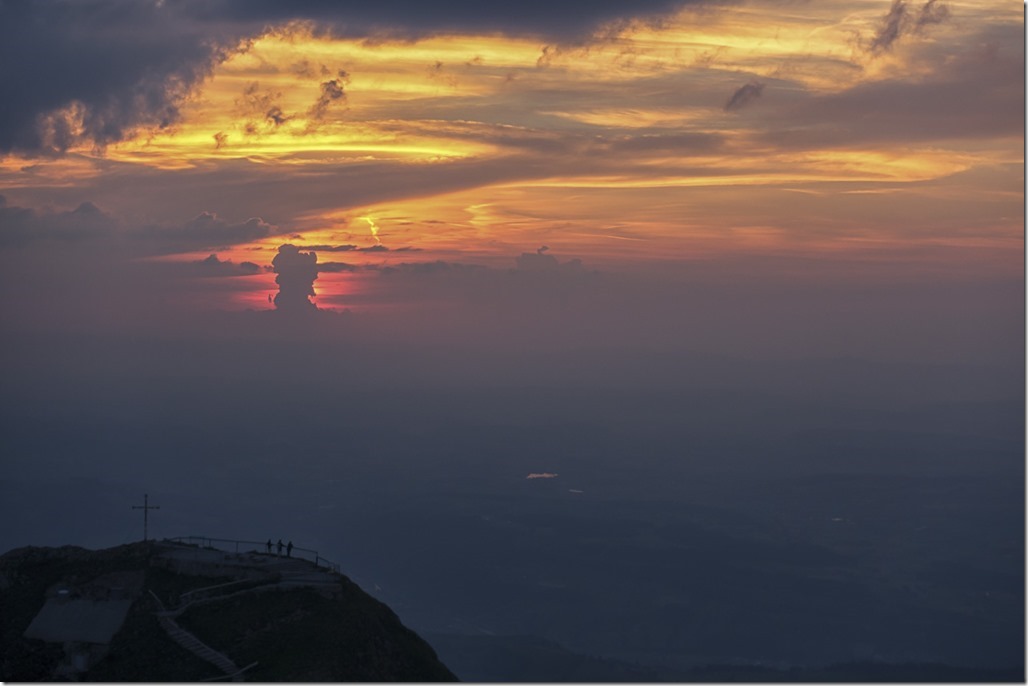 The Vierwaldstättersee on the other side. Not a perfect evening in terms of visibility but it is always nice here.

As I had to go down all the way to my car (approx. 1200m down) I didn’t spend too much time on the top but started to descent. And then, finally, I found two Steinböcke, which where were willing to cooperate and nicely stayed on a ridge. Distance to them was maybe 5 meters. Thank you for the cooperation! 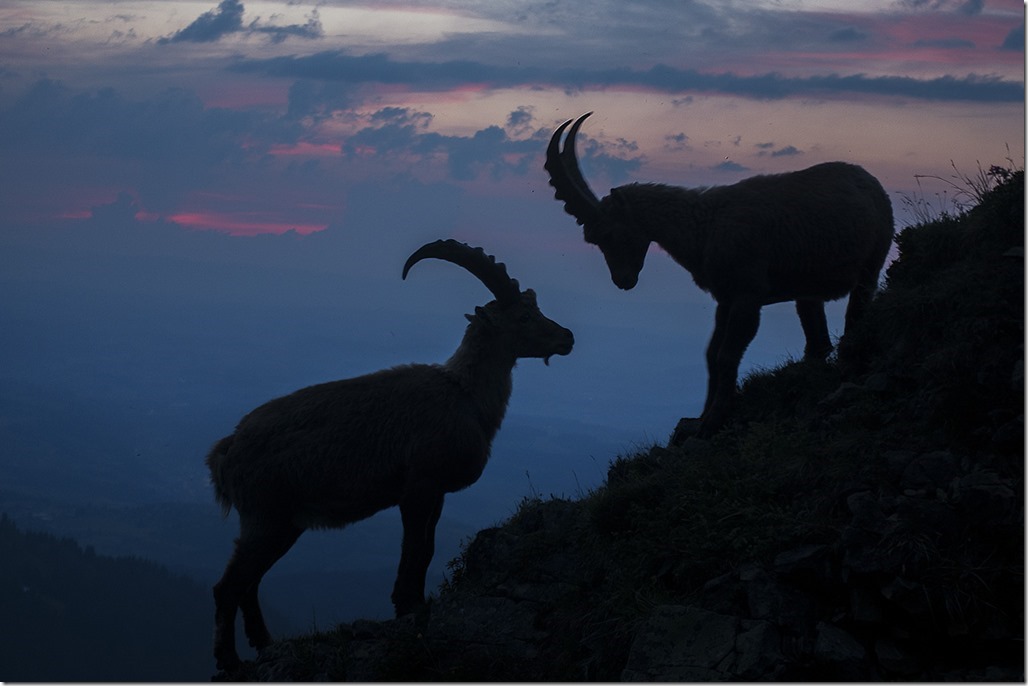 For the last 30 minutes of the descent I had to use the light of my mobile as the trail was going through a forest and it was getting too dark to see the obstacles properly. I would say this was a perfectly timed evening hike! I need to do something like this again.

Last but not least, here are the stats for the hike today: