This weekend I went to my hut in Arni. Initially I just wanted to do an easy hike to the “Sunny Ridge” but since my friend showed big interest in doing something more we switched to the iconic Ruchälplistock hike. This was the 4th time this year I was going up there. Yeah, i like it obviously. Based on my experience I would call it one of the best T5 hikes. While some might argue that it doesn’t deserve a T5 rating, it is a very good and rewarding introduction to the upper level of alpine hiking. Of course there are sections where you have some fresh air below your feet, but all of them have been simplified by a fixed rope which you can grab. 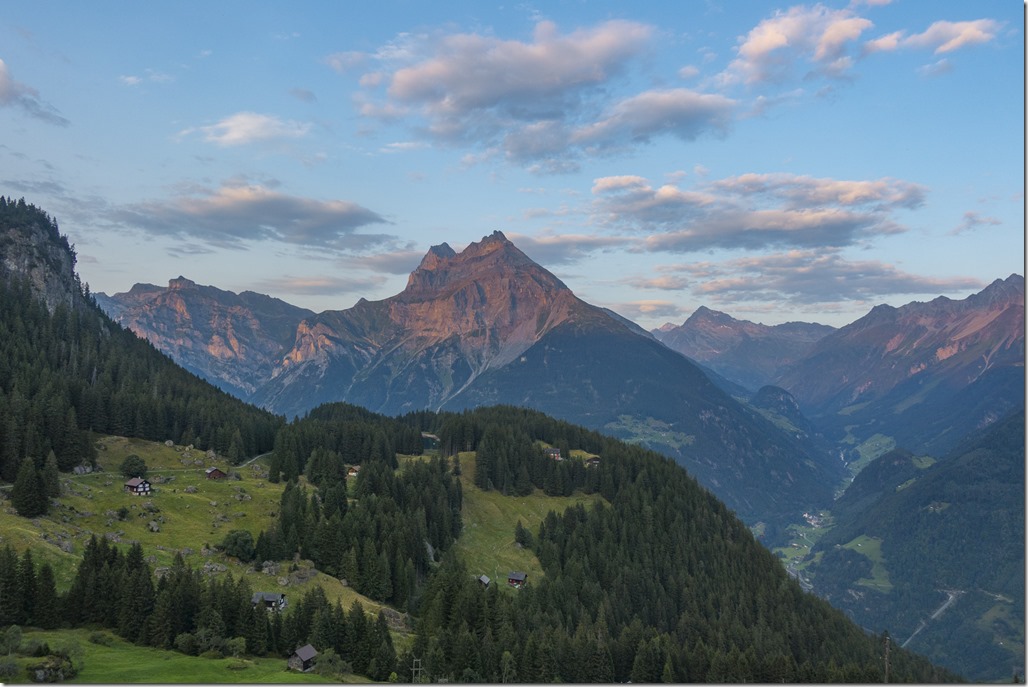 Since I didn’t set the alarm properly we had a rather late start after 7 but it was a perfect timing for the sunrise. 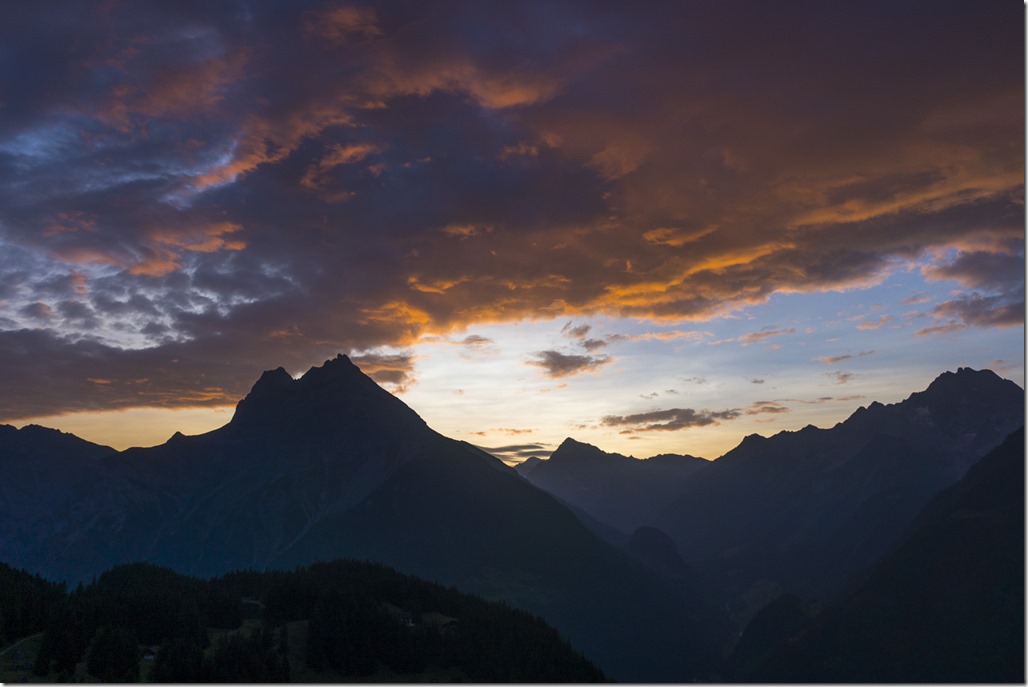 The entry to the Leutschach valley. I am still wondering what the purpose of this is as there are cows on both sides belonging to the same farmer. Maybe it’s just counting the number of hikers entering and leaving the valley so authorities have a rough number of how man people went missing, eaten by polar bears or mountain goats 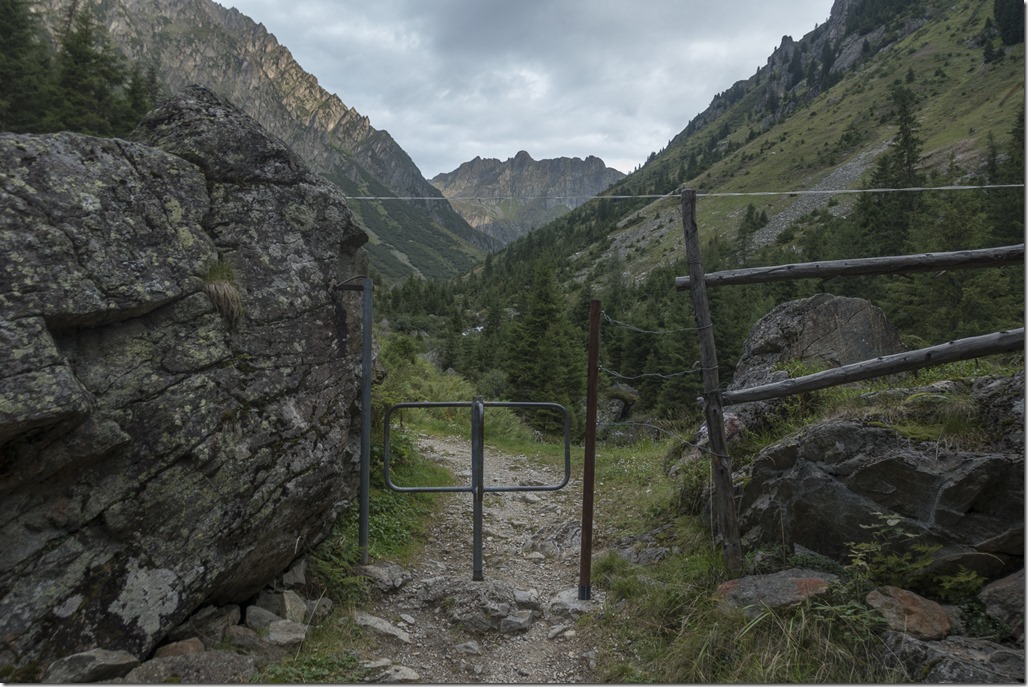 After 1:30 of hiking we had a glimpse of the houses below including my hut. 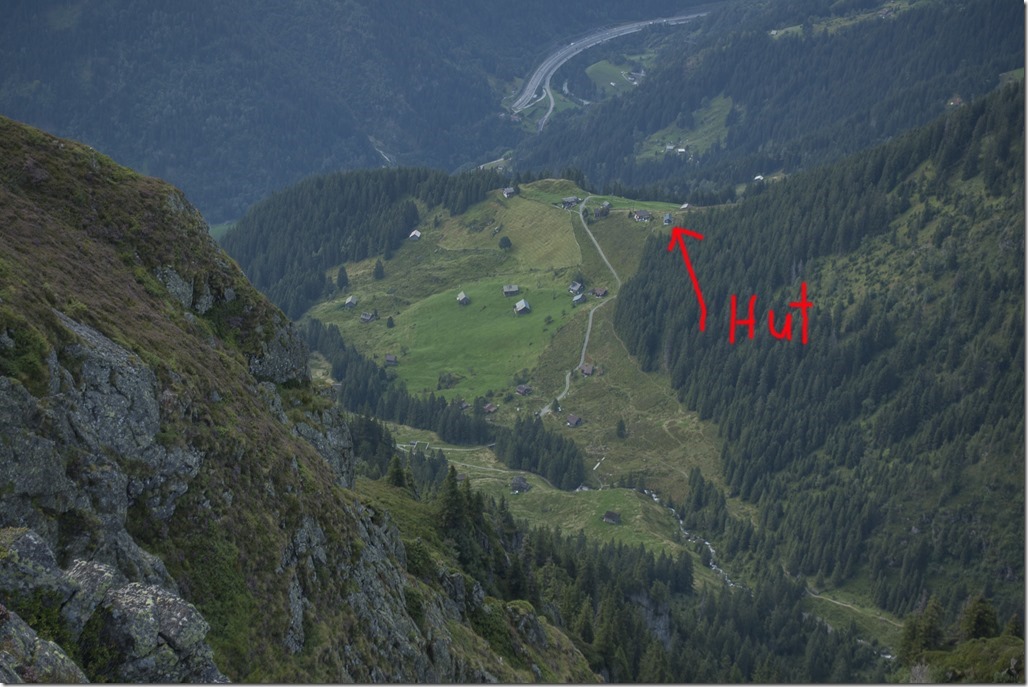 The weather was nice. 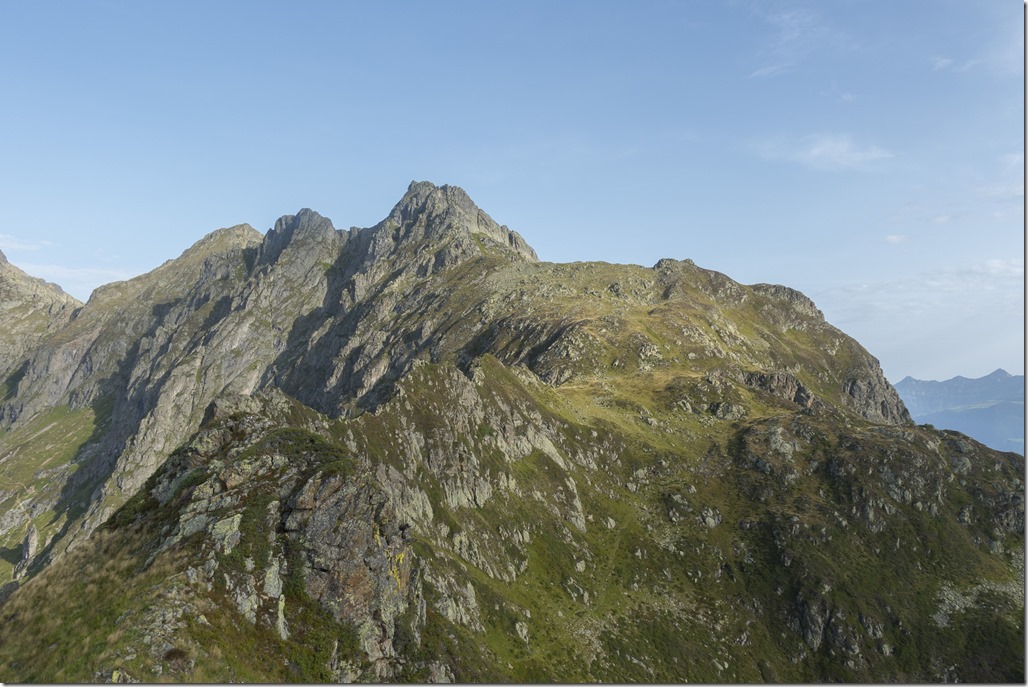 This is the place where I would like to camp at some point. A little nice lake with a beautiful view. You are in perfect position for an early morning summit of Ruchälplistock. And if you are really adventurous you can try to hop into the lake. I did it once in early spring with still some snow in the lake … interesting experience … 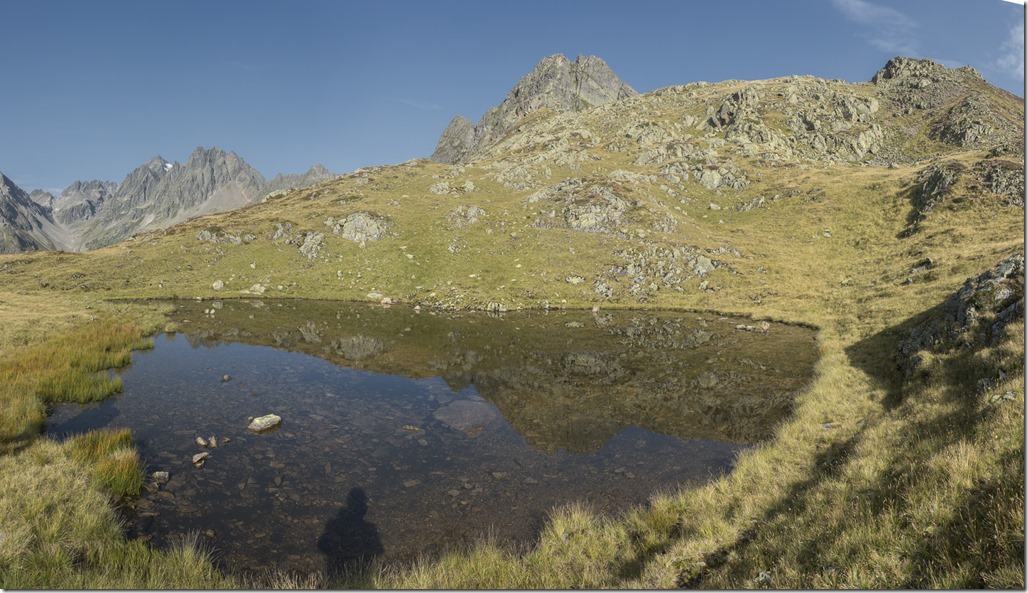 View from the summit. As you might see there is some rain over parts of the Vierwaldstätter Lake. 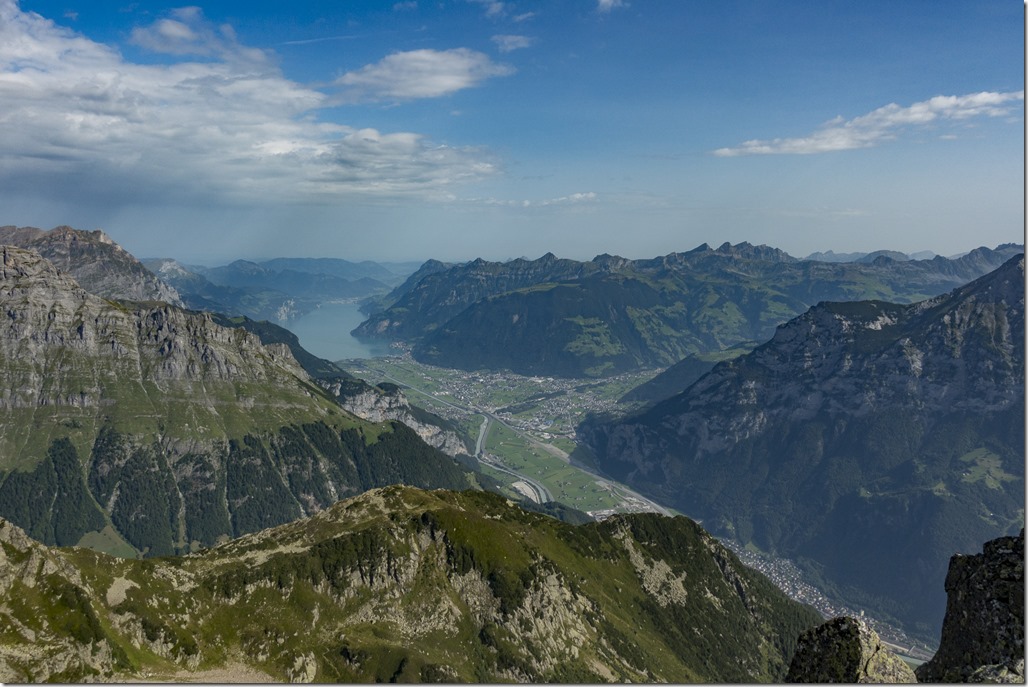 As I was not hiking alone I finally could get a picture with me on my secret view point on Ruchälplistock. This is not part of the official hiking trail. 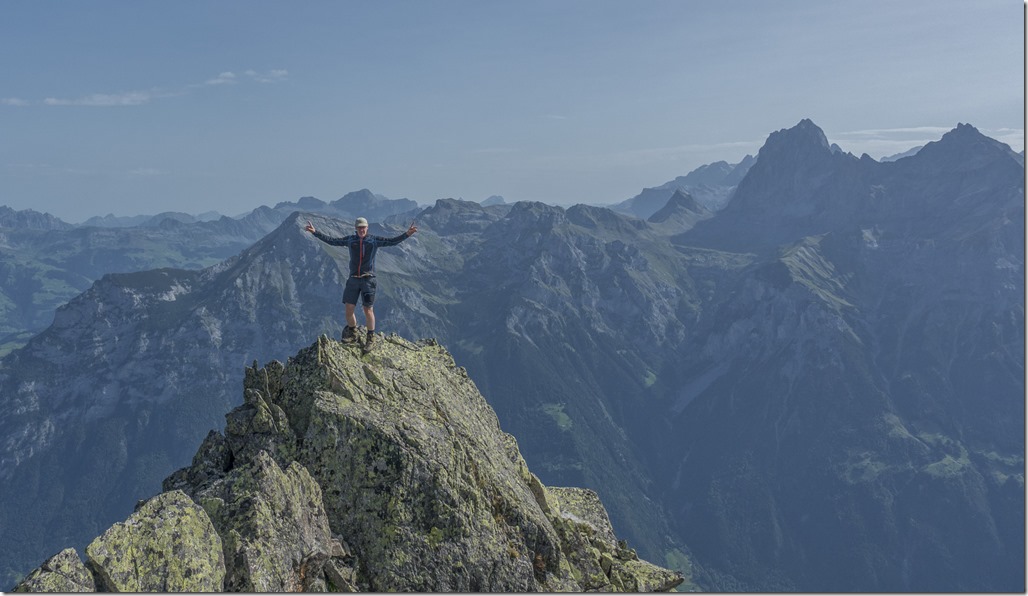 Today was a pretty busy day in the mountains. There were 2 groups of 4 and 2 hikers in front of us and another 2 behind. I have never seen so many on this trail. The day was just perfect to be missed as it was not too hot but still the sun was shining all the time. 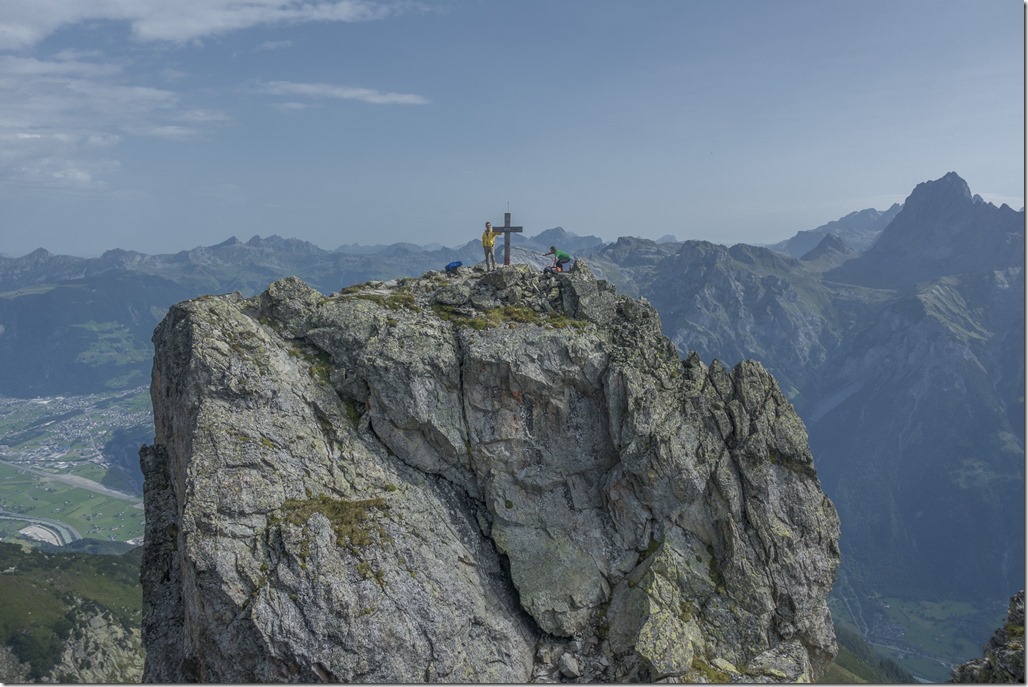 One of the many lakes on the trail. 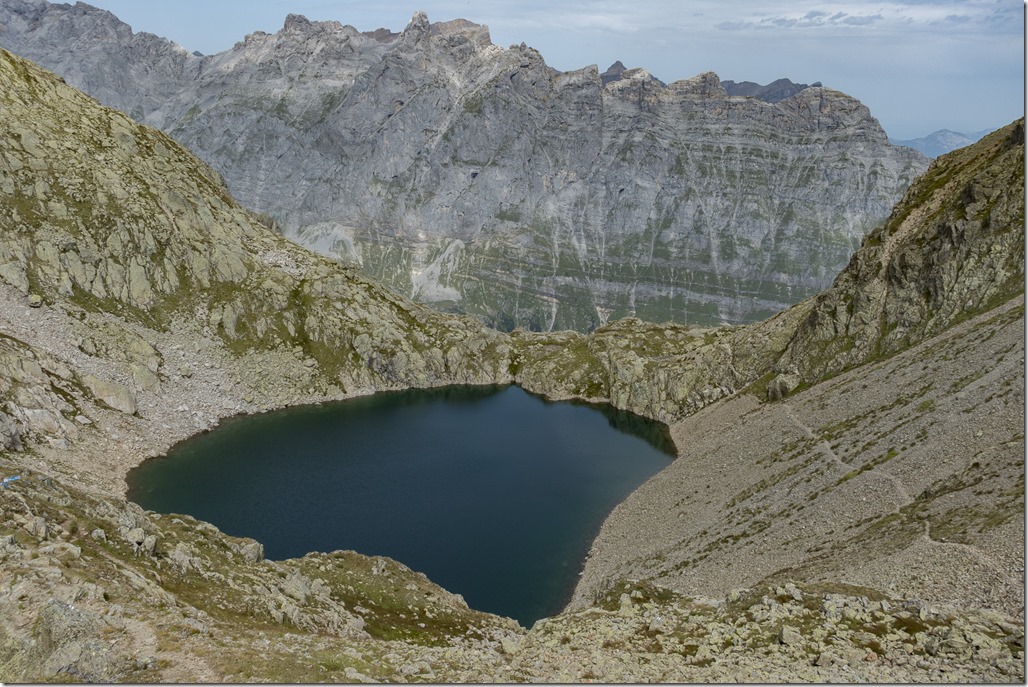 Looking down the Leutschach valley you can see why you should not enter during winter time. Avalanches will be coming down from both sides. 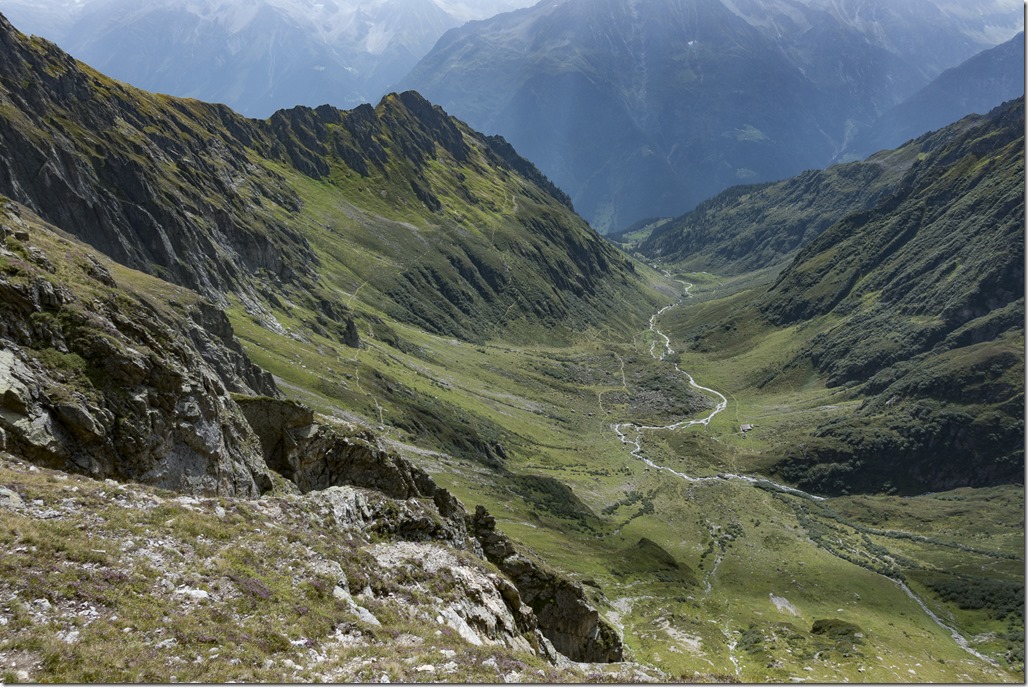 And another lake! Some smart guy could actually promote this tour as the “many lake” panorama hike. (6 at least) 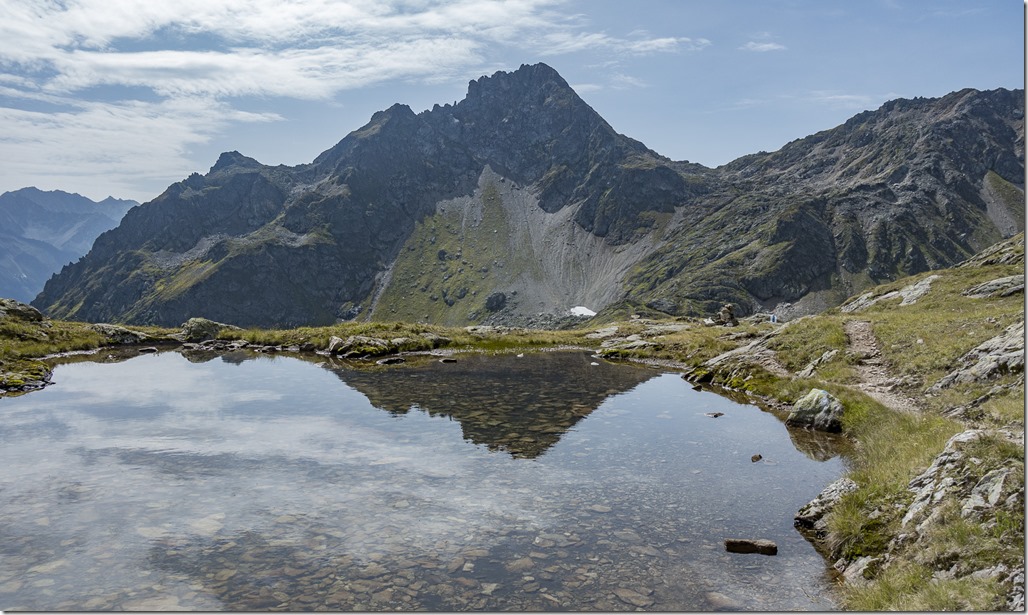 We did a quick stop at the Leutschach Hut. 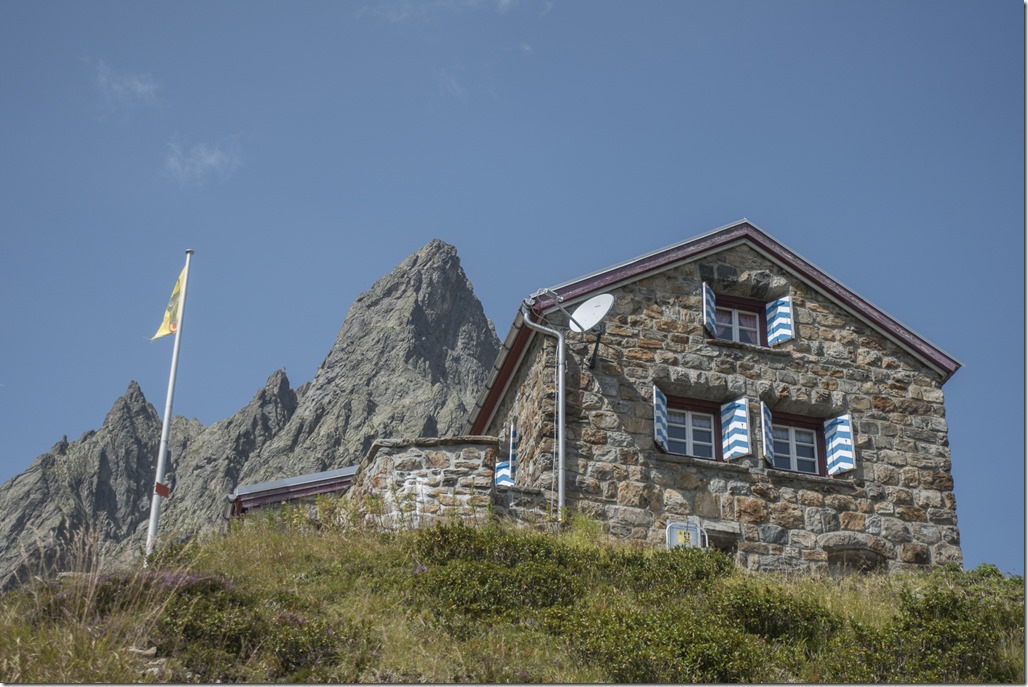 Access was tightly controlled by a group of goats. 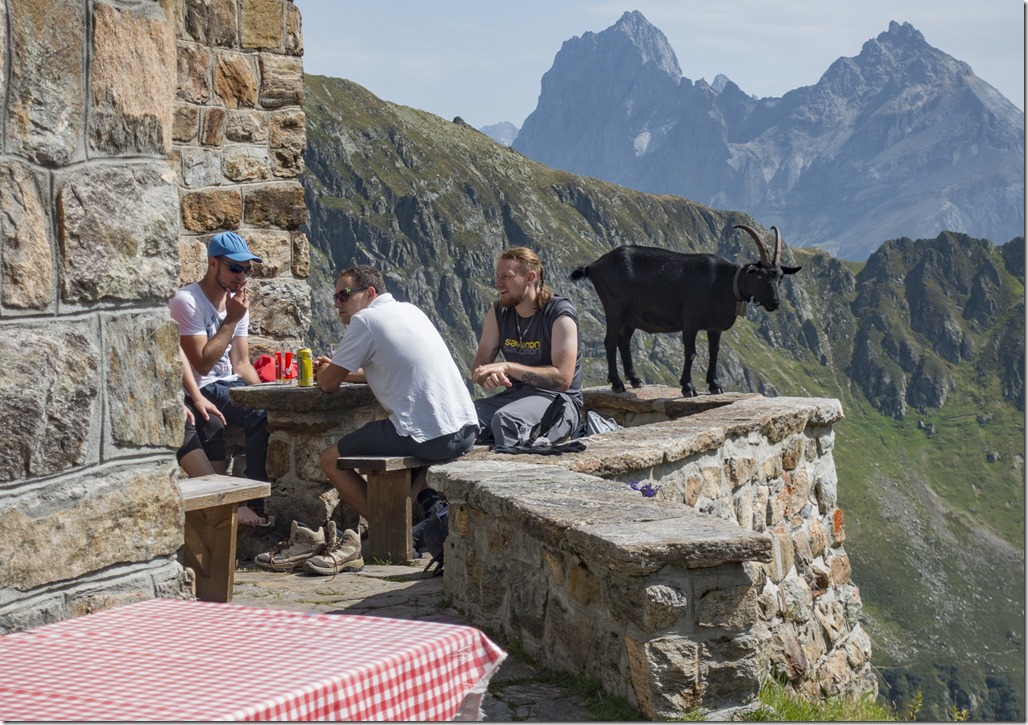 Or maybe that is the natural way of the owners of the hut to store the goat milk. In case they need some milk they just can call in one of them On the way down the trail goes alongside this lake which always has an amazing colour! I was trying to tweak the picture a bit so it looks more like reality. But reality with the right lightning conditions looks even better. So no more sofa hiking. Move your behind out of the chair and get up the Leutschach valley in order to see the lake with your own eyes!

When we left we already knew there would be some thunderstorms in the late afternoon. And the meteorologists were right. It was really getting dark and the atmosphere was getting tense. 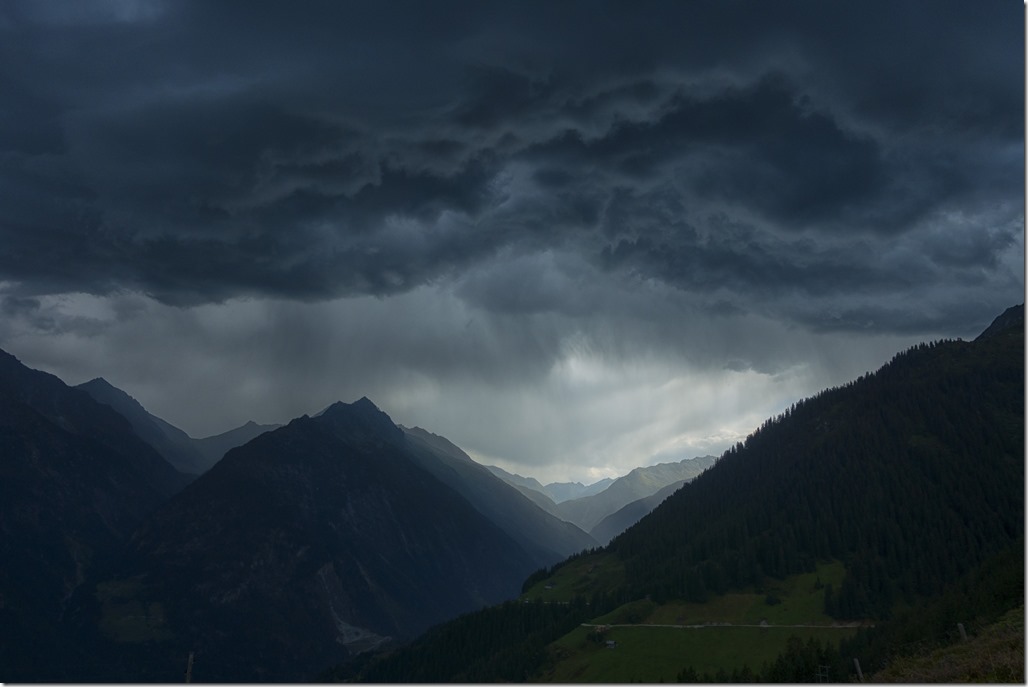 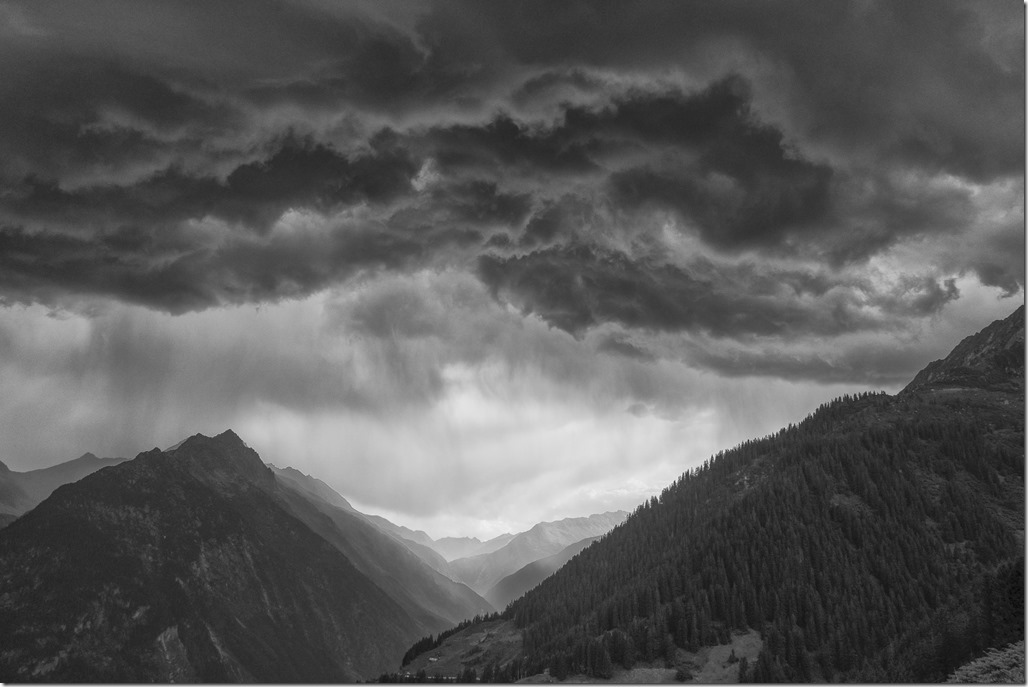 The thunderstorm was not a problem since I had my (patent-pending) sunshade-grill-o-rain installed. However there was still a problem: After the rain there was a rainbow forming which was disturbing our grilling quite a bit since we had to watch it. 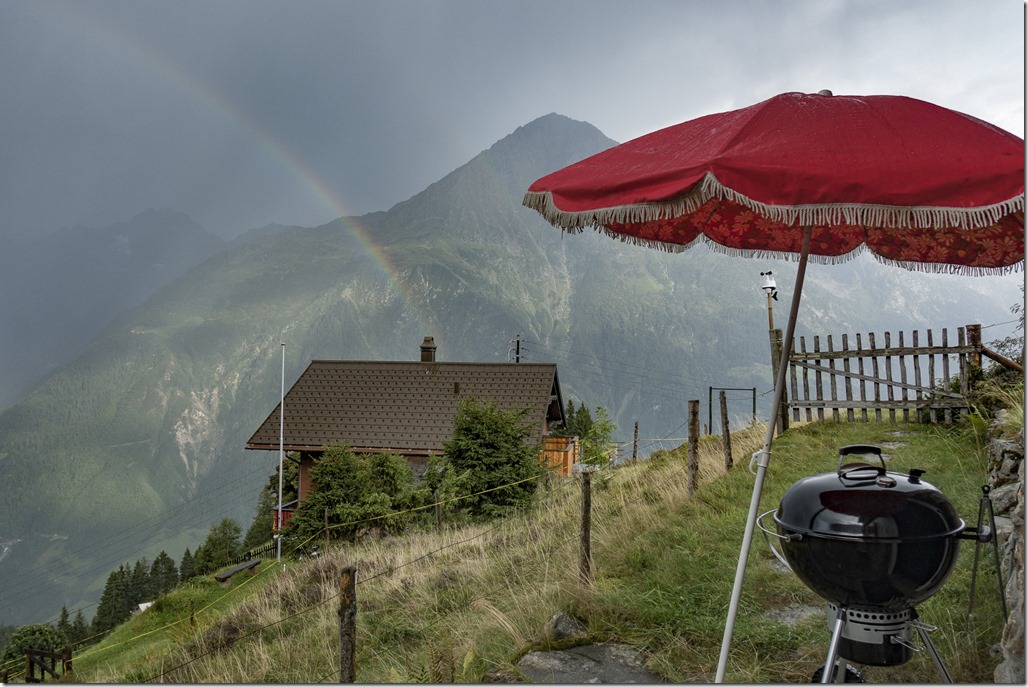 Nice rainbow over to whole valley.

At some point there was even a double rainbow visible. 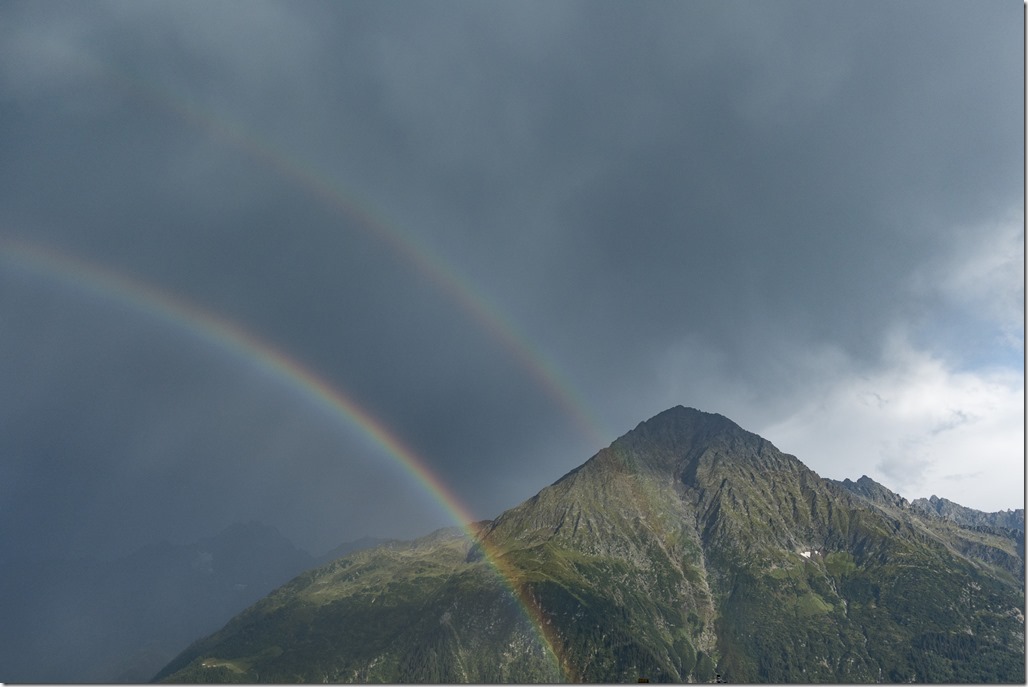 And the Windgällen with the rainbow. 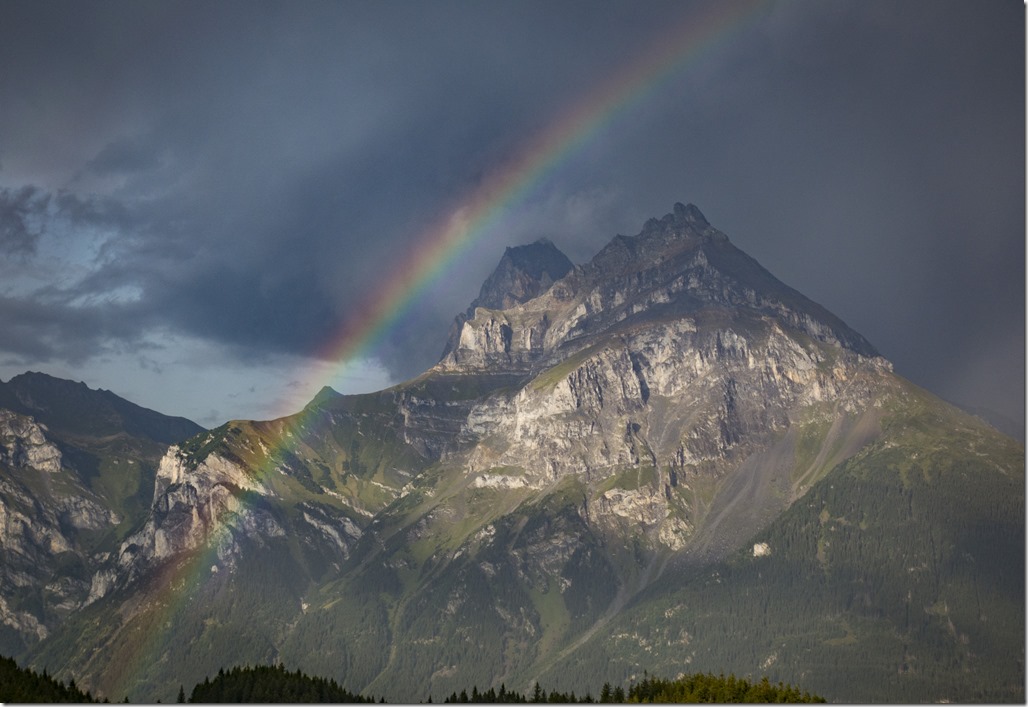 After the rainbow was gone we could finally focus on the food. 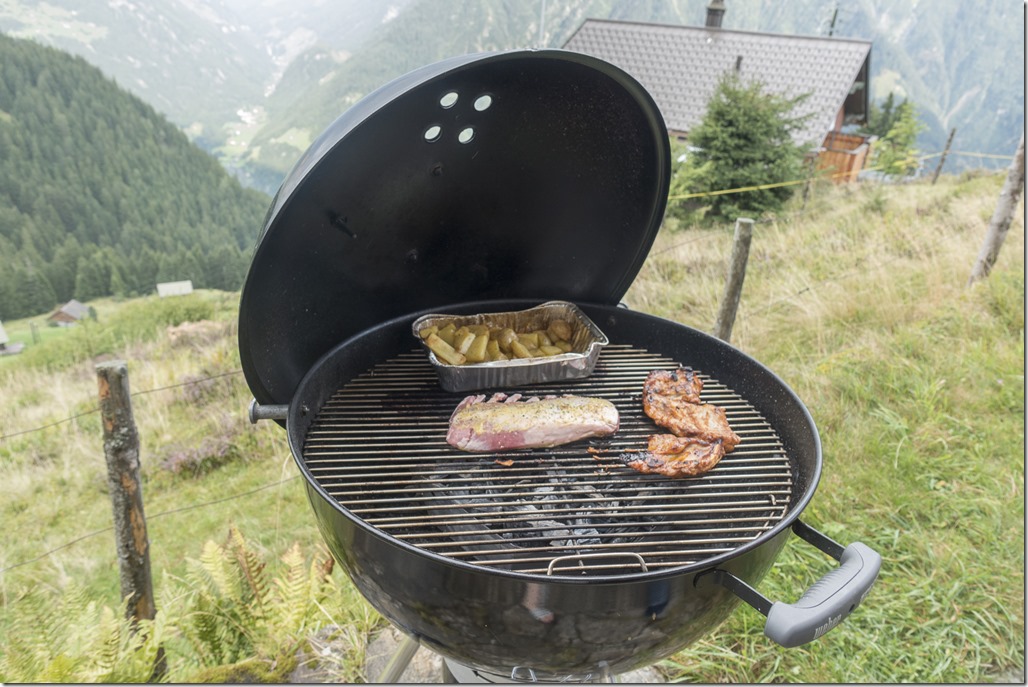 … which was giving back some of the lost calories. We had already observed two spiders trying to build a new net on the day before. Now it was time to rate it. Before the sunrise on Sunday morning. After that he clouds were forming but still the sun could get through from time to time.