This weekend was one of the rare occasions when the weather was flawless for a couple of days. And the temperatures were more than acceptable. Initially I had two different ideas but soon decided to go do Engadin to see the larch woods in their yellowish autumn colors. I didn’t do any specific planning of where to go or what to do. I just wanted to go there, see how it looks like and then decide what to do. The only thing I had done before was some little research where I would stay for the first night: Option 1 was a nice little lake in the mountains behind the Bernina pass, option 2 another lake much closer on the Albula pass. I wasn’t able to leave the office early enough to reach option 1 before sunset so I was aiming for the second place. And when I was finally on the road I was so busy thinking of some other stuff that I took the wrong turn and was heading towards Arni instead of taking the highway to Chur which resulted in me going through the Uetliberg tunnel twice …

The place I was aiming at was the little lake “Lai da Palpuegna” on the Albula pass. It is a beautiful little lake with crystal clear water. There is one catch with that place though: Camping is explicitly not allowed. But by the time I was there it was already rather dark. Combine this with the fact that my headlights were out of battery. So I was simply not able to see the warning sings … Sounds like a good excuse? Whatever, I was the only guy around the lake and as usual I leave no traces when camping. Because I could park my car just 10 minutes away I was overloading my bag pack quite a bit which included my laptop in order to do some research of where to go tomorrow.

I was expecting temperatures around 0°. Based on that fact I should have theoretically packed my winter camping gear. Theoretically! Practically the issue was that my winter gear was patiently waiting in my hut in Arni for the winter. So I had to take some extra measurements to not get cold during the night. Frist of all I replaced my light down jacked with my real one for winter time. Then I upgraded the light long underwear to something with the tag “thermo” in its name and last but not least I used some random jackets as insulation to compensate for my ultra light 0.5cm sleeping mattress. Bottom line is that while it was not super cozy in my sleeping bag it was acceptable.

Before going into the sleeping bag I took the opportunity to take some pictures of the lake with the reflections of the sky and the lights of cars passing by on the nearby road. Even though it was dark you could already see the yellow larchs. This will be a nice day tomorrow! 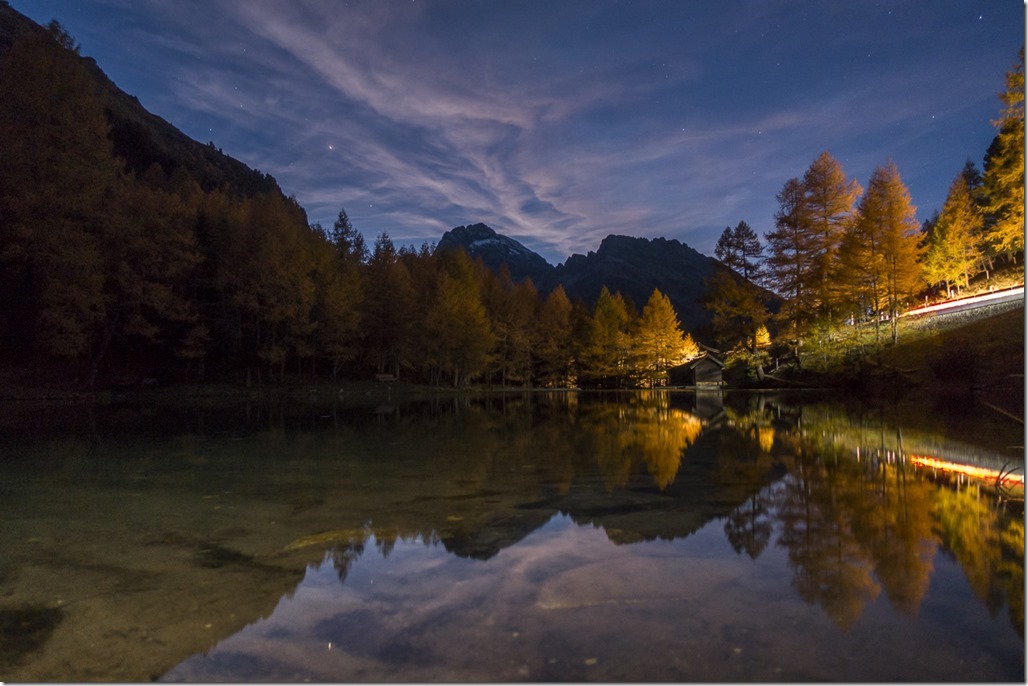 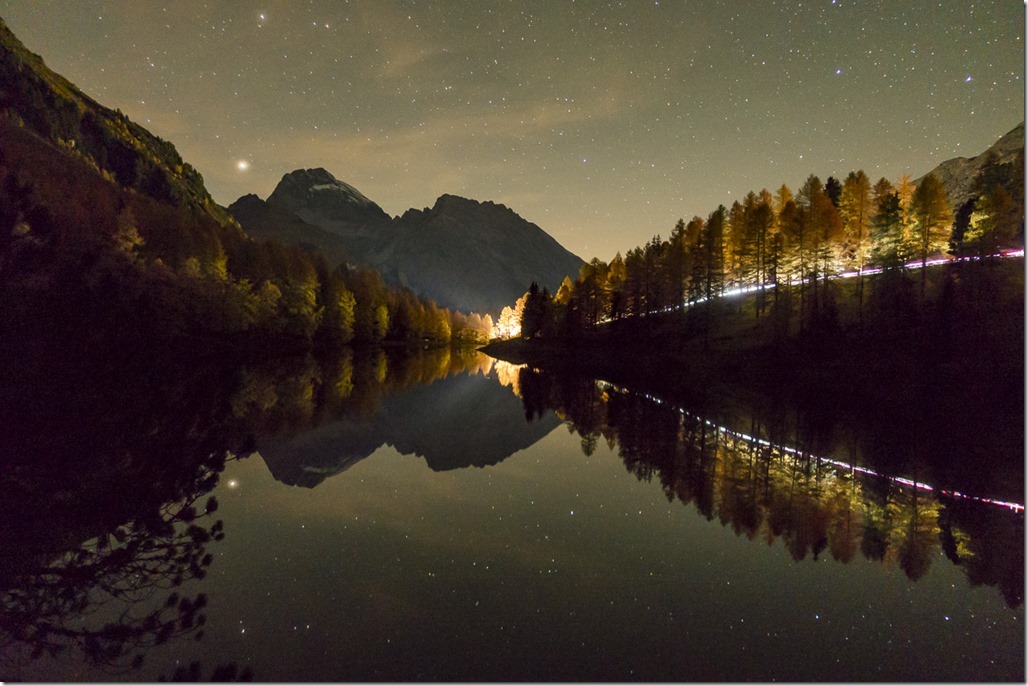 After going into my sleeping bag I was trying to find a nice hike for the next day. I had the hiking guide from Engadin with me and found some interesting options. However I had to assess the situation tomorrow on site as there was snow above 2900m and most of the hikes were going higher up, some even explicitly mentioning the danger in case of snowy/icy/wet conditions. “Let’s see” I thought and started counting the billions of stars above me.

One of the big advantages of this little lake was that it is very easily accessible and one of the big disadvantages is as well that it is very easily accessible. So well before sunrise there were the first people arriving, some of them carrying more photo gear than the weight of my whole backpack. On a side note I have to admit that I also had 30kg of photo gear with me but I had left it in my car … never go unprepared …

Photographers tend to be more the stealthy type of people not making a big noise so I took another nap while waiting for the sunrise. Even so the sun was rising around 7:30 I had calculated that it would not reach the lake before 9:50 due to the high mountains around it. 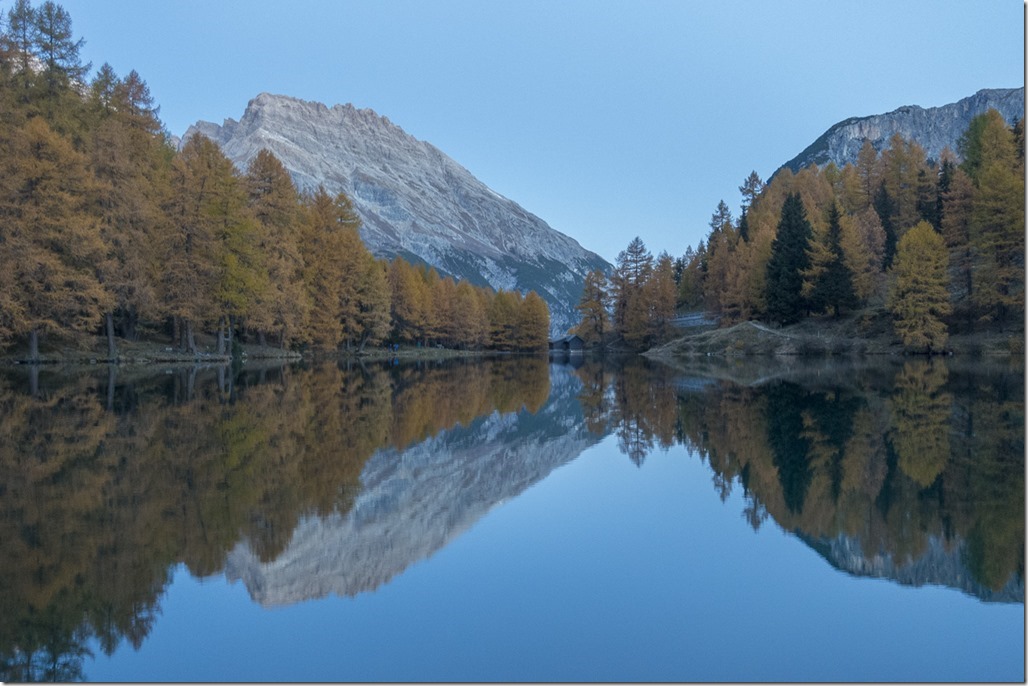 At some point I decided that it was a good time to get up and have breakfast, “leaving no traces” as usual. Some might argue that some of the grass on the following picture looks rather abused. But I can assure that no harm was done and all grass lived happily thereafter … until the Winter will come. 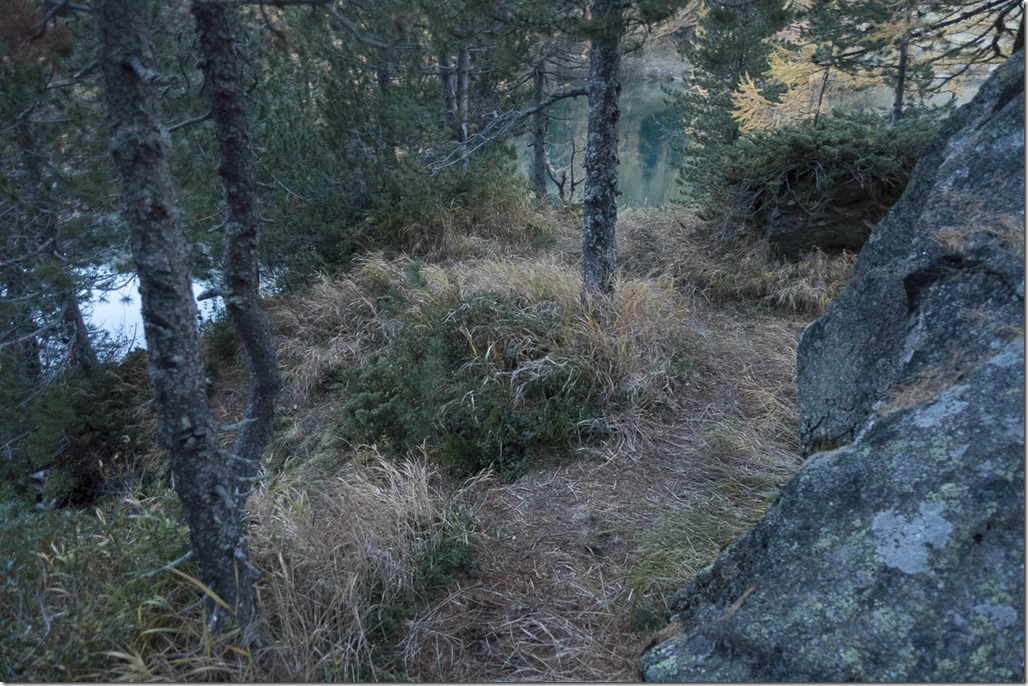 This little lake is a gem. The water is clear and flat like a mirror creating the perfect reflections. 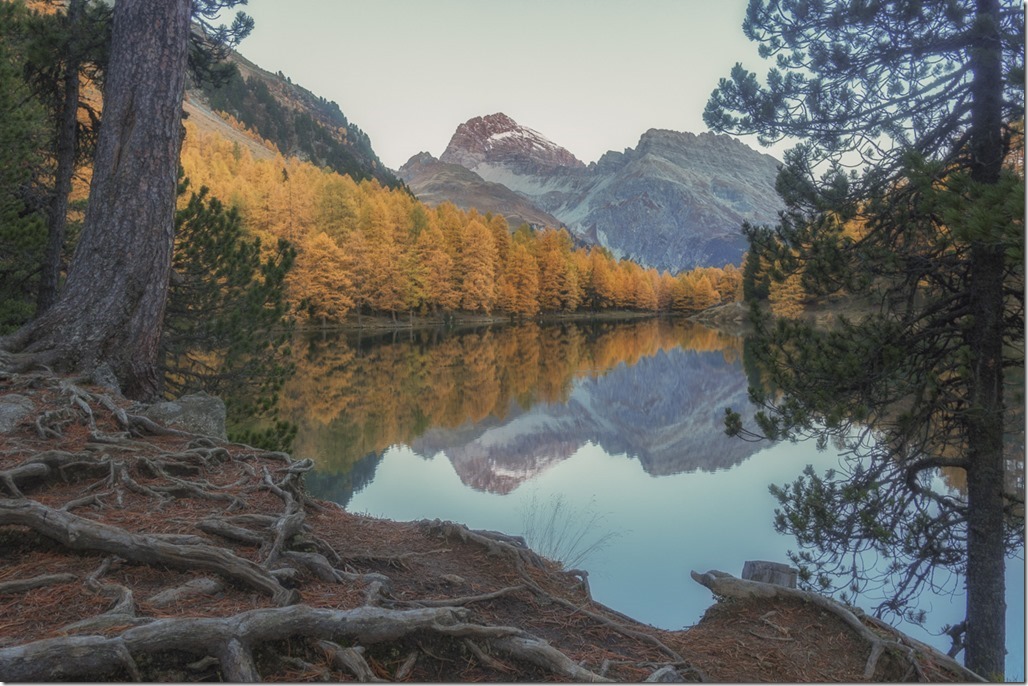 You can turn a picture upside down and would not be able to distinguish between the real one and the reflection. By the time the sun was reaching the lake the temperatures had already reach a level where shorts and a t-shirt were the appropriate cloths. So I changed, took some final pictures and headed off over the Albula pass to the Engadin. The lake “Lai da Palpuegna”  was already great but when I reached the Engadin valley is was even better. The whole valley was shining in a yellow color in the morning sun. Fantastic!Exactly what I was looking for. 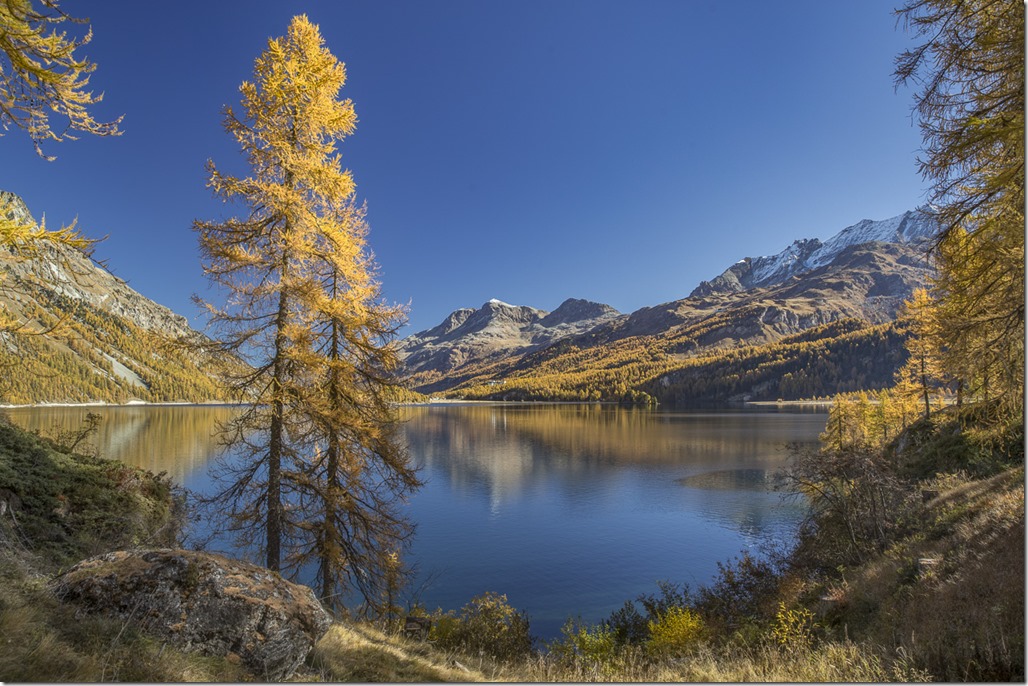 I took many picture on the way to the starting point of my hike. 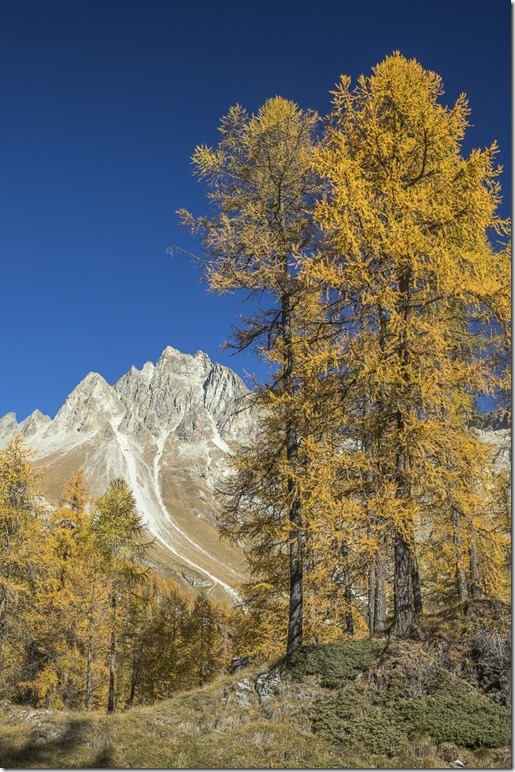 Yesterday evening when doing some research about what to do today I decided that the Silsersee region at the upper end of the Engadin would be a nice area for a hike. From there you can see all the different lakes. Initially I had a rather technical/difficult hike in mind which was not going up too high thus avoiding any snow but it turned out to be too far away from the Silsersee so the view would be kind of limited. Therefore I decided to go for “Piz de la Margna” where the top was already covered with quite some snow, as you can see on the following picture. But there were  options available to turn around easily in case it was getting too rough. I wasn’t in a hurry at all. My favorite little island in the lake. 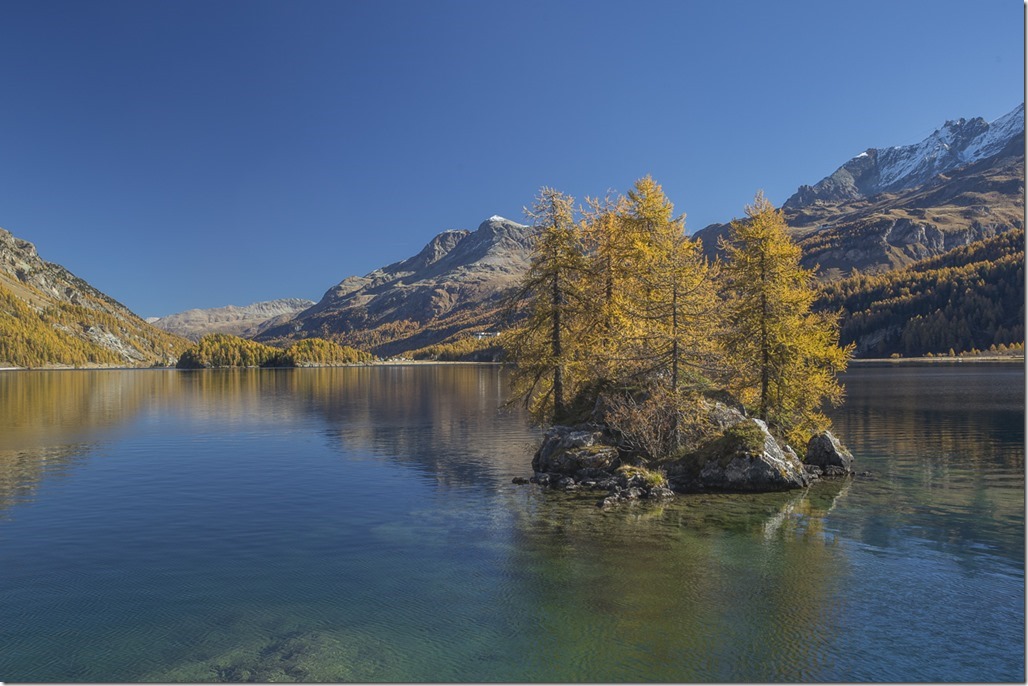 Before heading off for the hike I bought some batteries for my headlights.According to my guide the hike was 5-6hours and it was already around 12’o clock so I would possible not return before sunset. And I didn’t want to have another “use-my-mobile-phone-as-headlight” action. 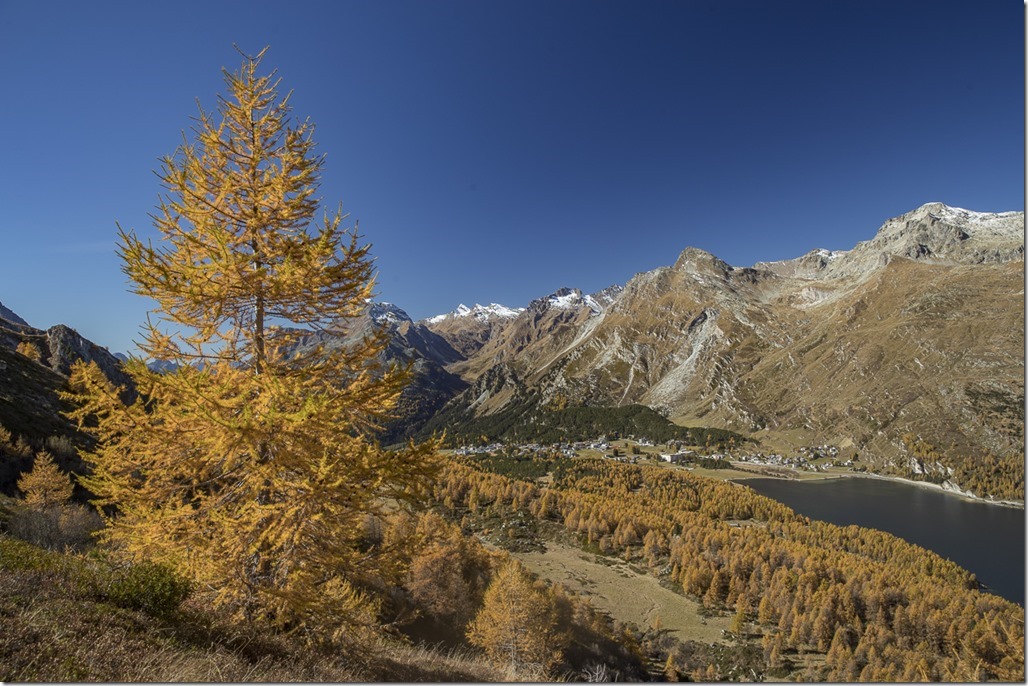 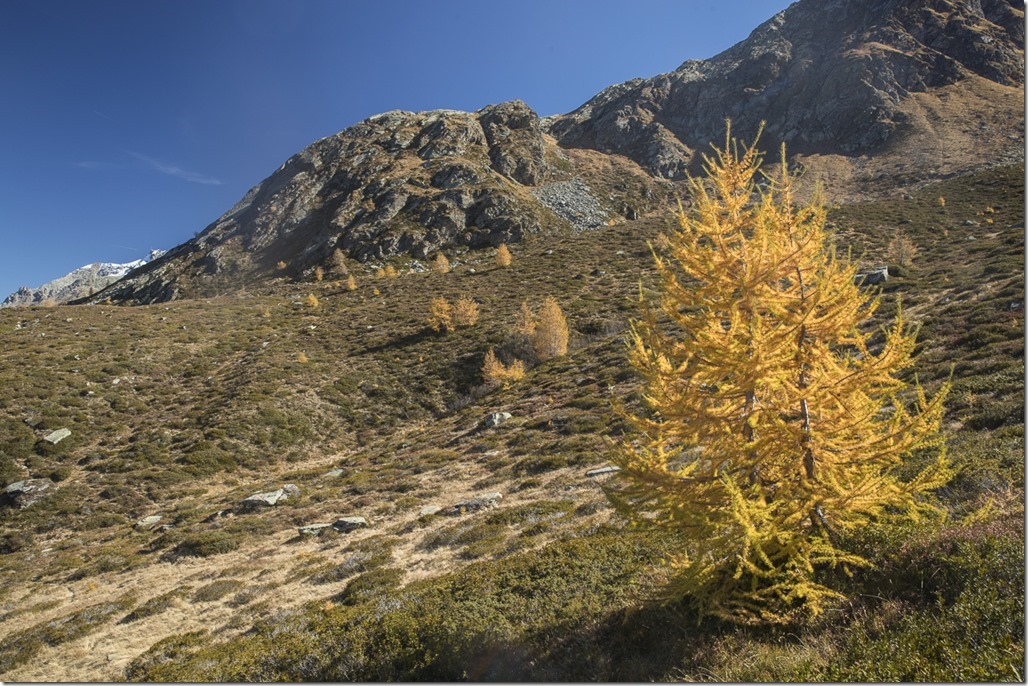 I decided to take some short-cuts here and there in order to compensate a bit for me stopping every couple of meters. Anyway there was no trail on this part of the hike so I didn’t have to following anything. 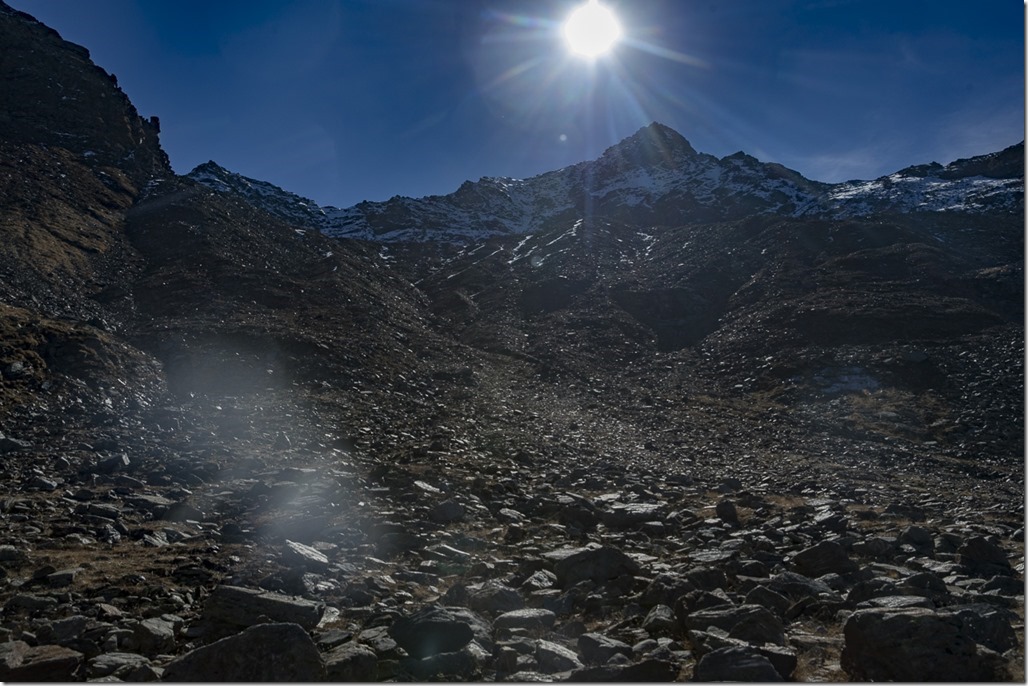 When I reached the ridge of the mountain which eventually was leading to the summit I had to admit that I was not really acclimatized from this altitude. Of course this wasn’t on 5000m but you can already feel the difference at 3000m when doing some intensive activity and this year I have never been above 3000m. There was quite some snow on the ridge and it was frozen. As long as it was not very steep this was perfectly fine. But when it got steeper I was wondering if I should return and not continue to the summit, as I had no crampons with me and some of the sections ahead of me looked like slipping would have had a rather negative impact on my overall health. 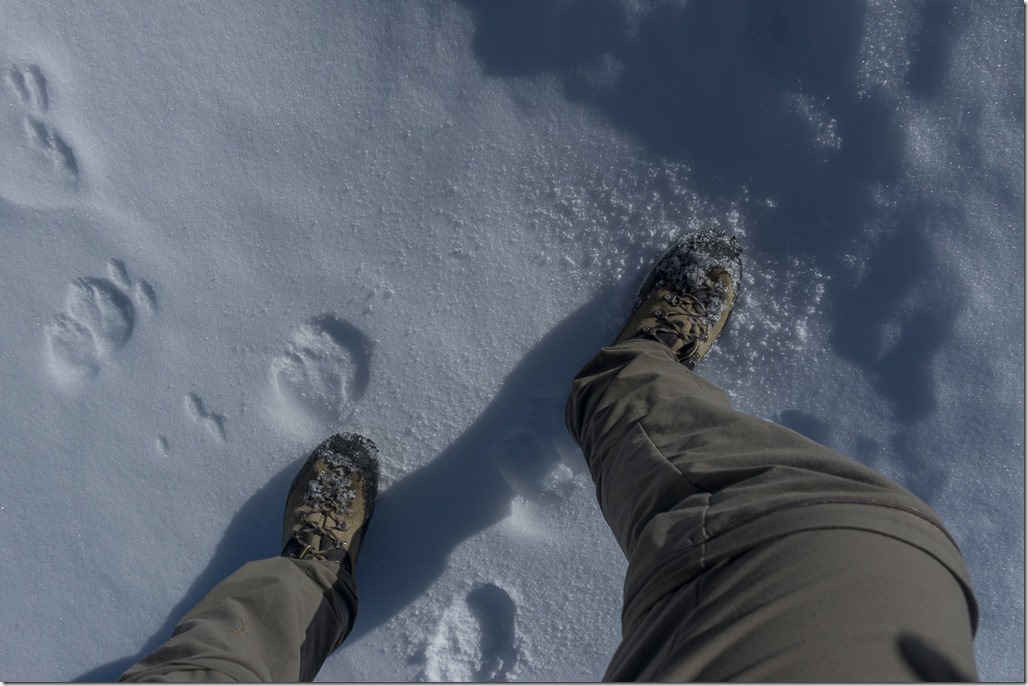 I decided to continued but tried to stay on the rocky ridge as much as possible instead of going into the flanks which was according to my hiking guide the “official” path. I general was obviously still on the right track. Further up when the ridge was also covered with snow I found good steps from somebody going up earlier. Thank you! This definitely saved the day as I would have probably turned around there without the track. 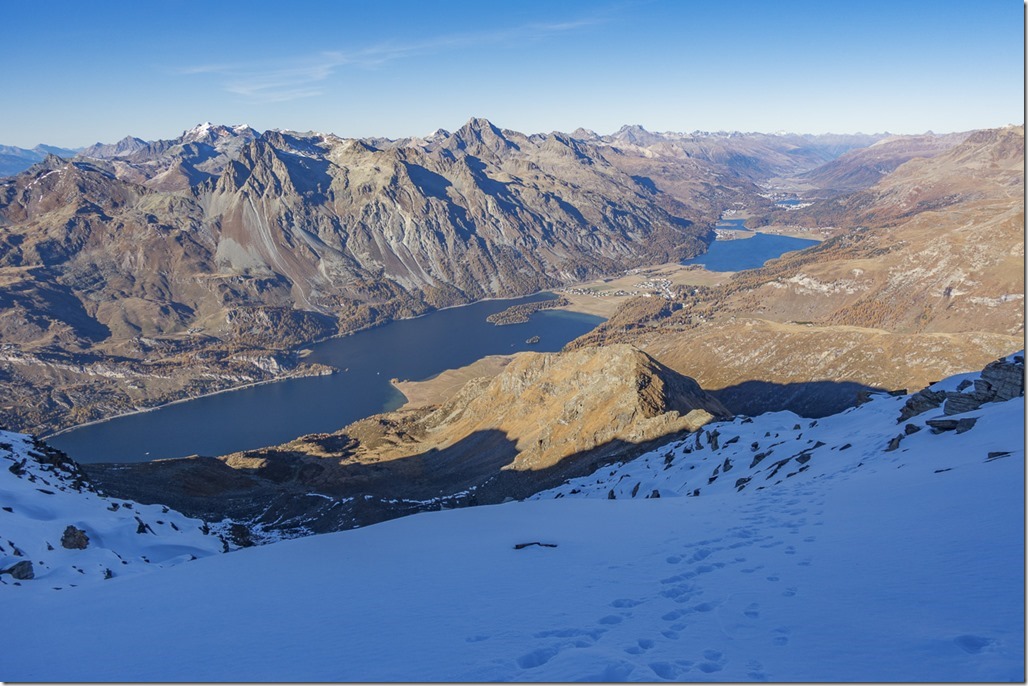 The trees didn’t look as yellow from the top but the perfect view was more than compensating that. 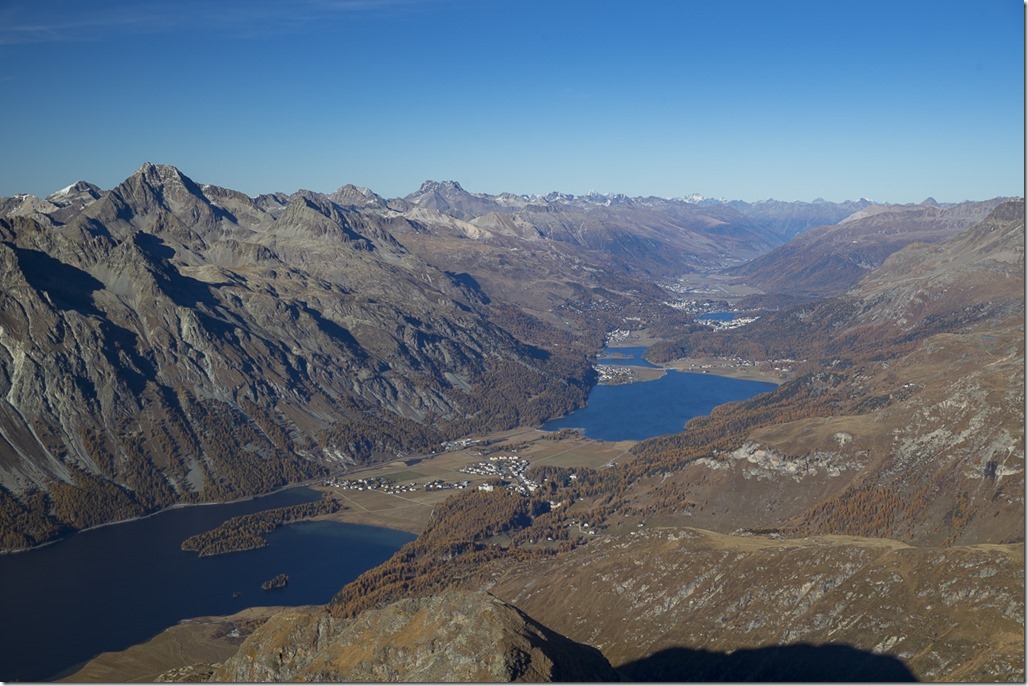 Time for the usual summit picture with St.Moritz in the back. As it was already 4’o clock by now I figured out that I had to run down a bit in order to reach the trees before sunrise which I definitely didn’t want to miss On the way down I also had to refill my water bottle when I reached the first little stream. I obviously had misjudged my water consumption. The temperatures were higher than expected. The Engadin valley is perfectly alight with the setting sun. So you can enjoy the day as long as it last.

Some trees in the last light of the day. 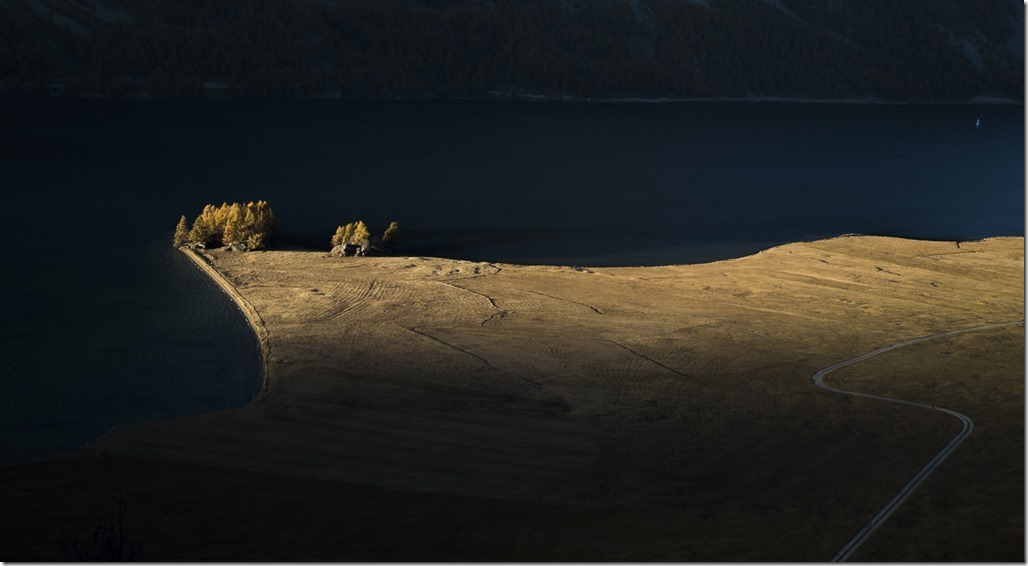 I was back at my car at 7. At this point I had no clue where I should stay for the night. I checked the place of option 1 from last night but that was more than an hours drive away. Too far! Furthermore I only had 1.5l of water left and one portion of the camping food so I was running out of supplies as well. And then I had no dry t-shirts anymore as I was sweating quite a bit during the day. And the night was going to be colder than last night. Soooo what should I do? Find a hotel for the night? Or do something which I have never done in Switzerland so far: Take my tent and go to an official camping place. After checking booking.com for a second I decided that I was going to look for a nice place somewhere outside and do some more counting of stars there.

I found something nice which only required a 20min walk to reach. While driving there I was looking from a shop where I could buy some more food. But as it was already late I could not find anything open. So I had to stick with what was left which was perfectly fine in the end.

The night sky was really brilliant tonight. The stars seemed so close that you could grab them with your hands. 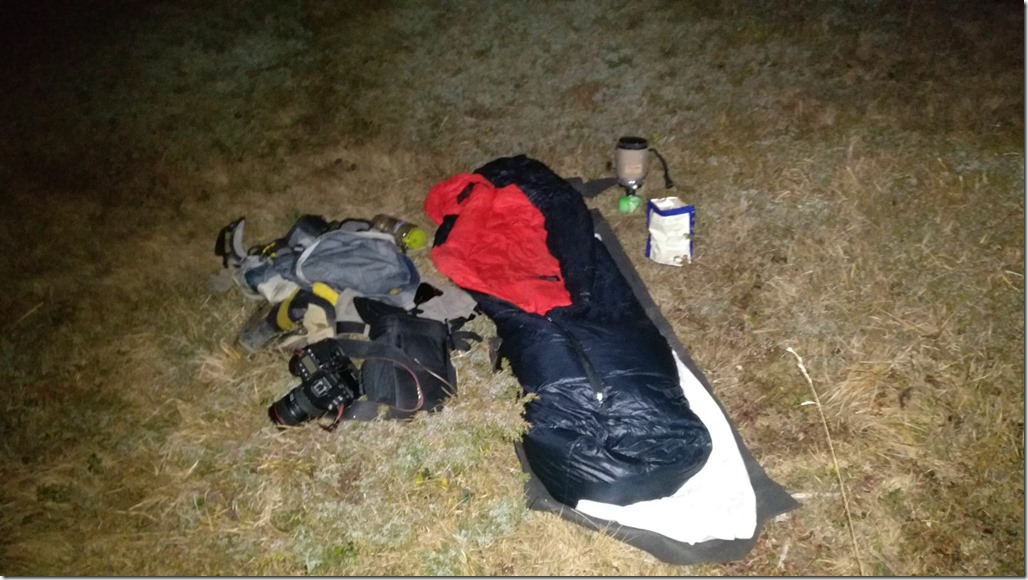