This night I had booked the best chairs for the evening show! Unbelievable! Lot of space for your feet, no person in front of you which keeps sliding from left to right and blocks the view to the screen and of course no smelly air from the pop corn! Did I mention that I had booked the 360° 3D ultra high definition show? Yes, I was there and it was amazing. The stars were even brighter compared to last night. The following picture shows the milky way with the Andromeda Galaxy on the lower left bottom. And below you can see the lights of Surlej/Silvaplana on the bottom, on the mountain summit the Corvatsch station and the famous Orion constellation in the sky. 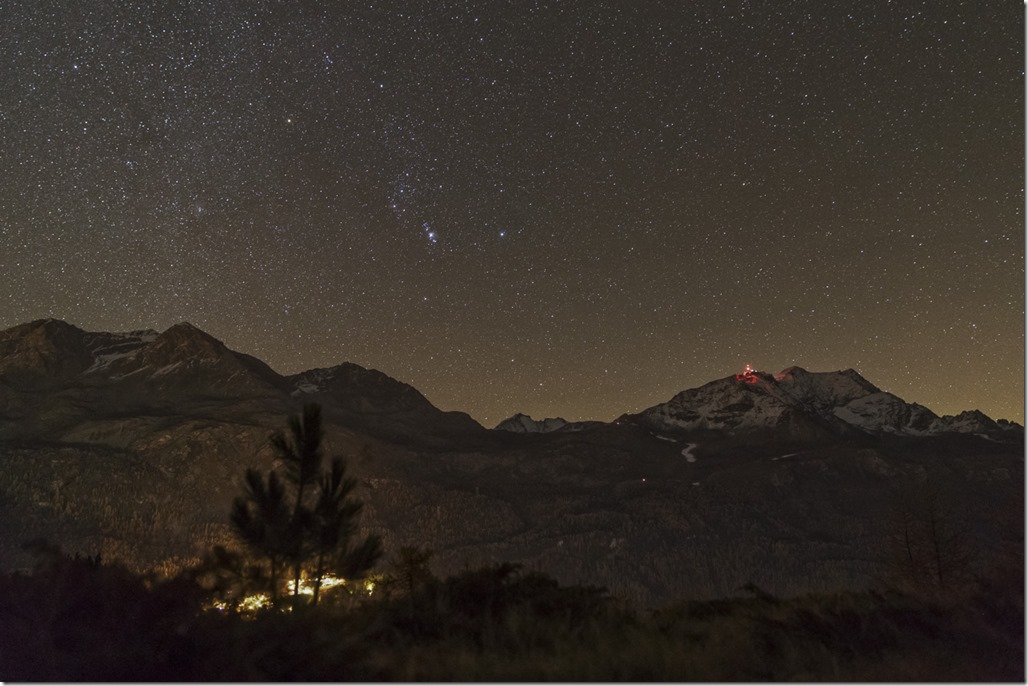 My plan of adding some more layers for the night worked out very well. It was cozy in my sleeping back the whole night and the fact that I was laying on a meadow was also helping to improve the comfort level. I already knew what I wanted to do on Sunday: After trying to reach the little lake behind the Bernina pass for two days in a row unsuccessfully I was planning to go there tomorrow for a hike. If I would not have had to work on Monday I would have stayed there for another night. 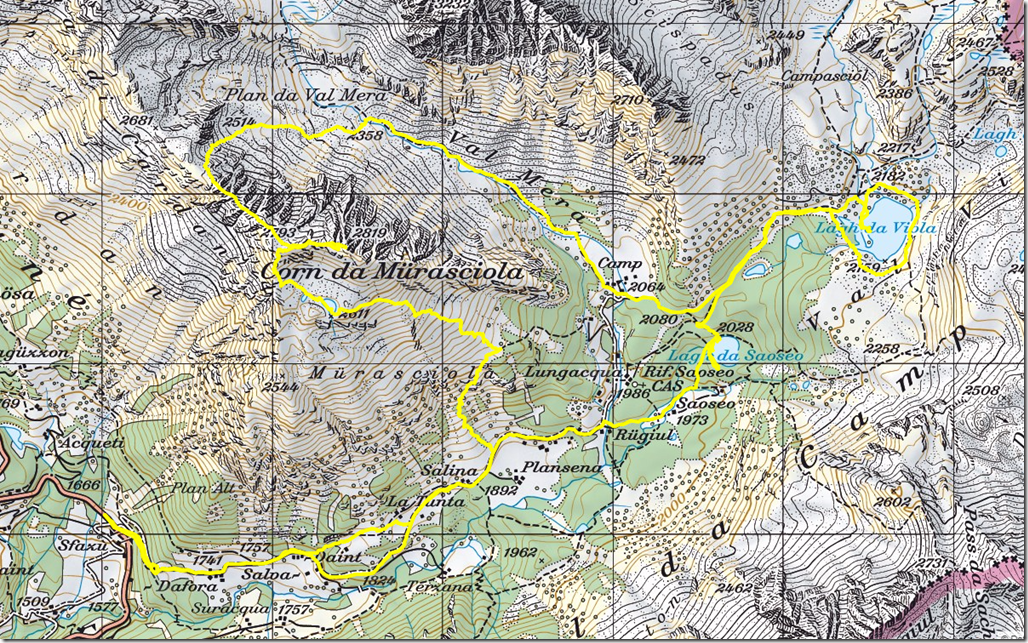 I had found some nice easy walk in that area in my hiking guide which I planed to do first and after that I would visit the “Lagho da Viola” and “Lago da Saeoseo”. What I didn’t noticed – because I wasn’t reading the description carefully, meaning at all – was the fact that to road to the starting position was actually closed for general traffic. 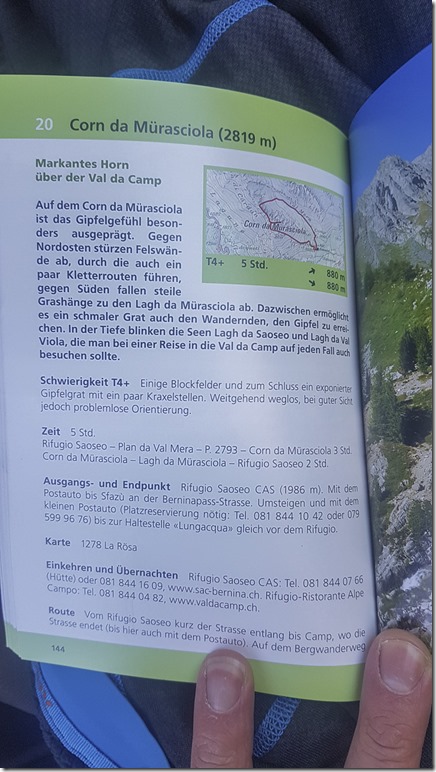 Today I didn’t stay in my camping location until the sun was illuminating. I had hiking plans. Once the first light was visible on the higher mountains I packed my stuff. The view was nevertheless nice. I like this mixture of yellow and green trees. 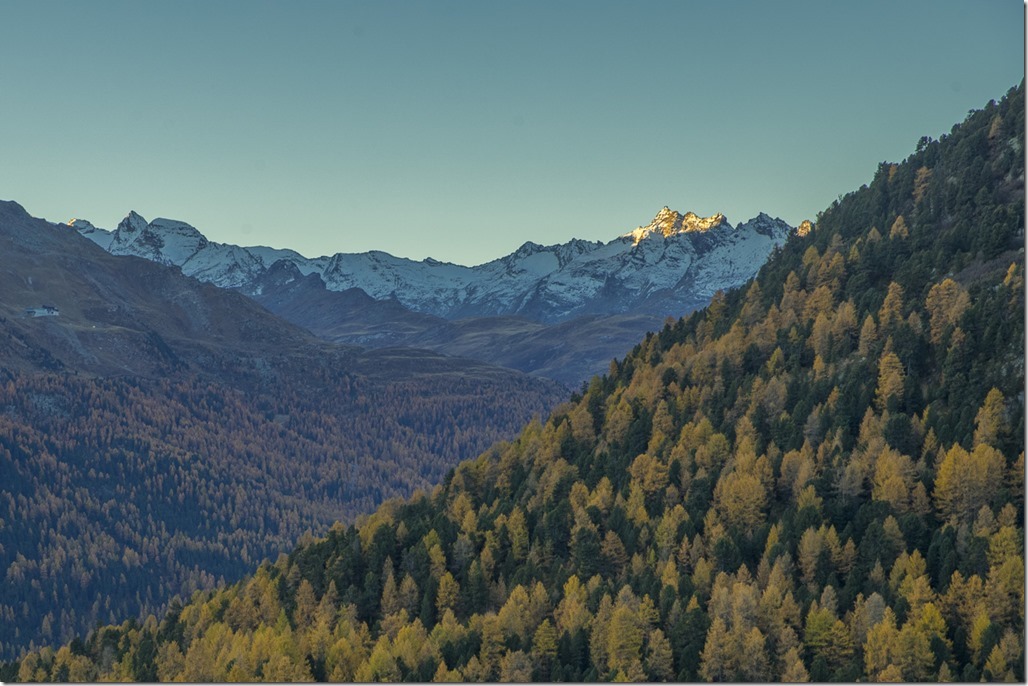 First priority today was to restock my depleted food supplies. I managed to find a gas station in St. Moritz with a shop which was open for a change. And I had to take a picture of all the expensive hotels there. But I have to say that they have a nice view. Big river bed from above. Imaging how this looks when there is a lot of water in it. 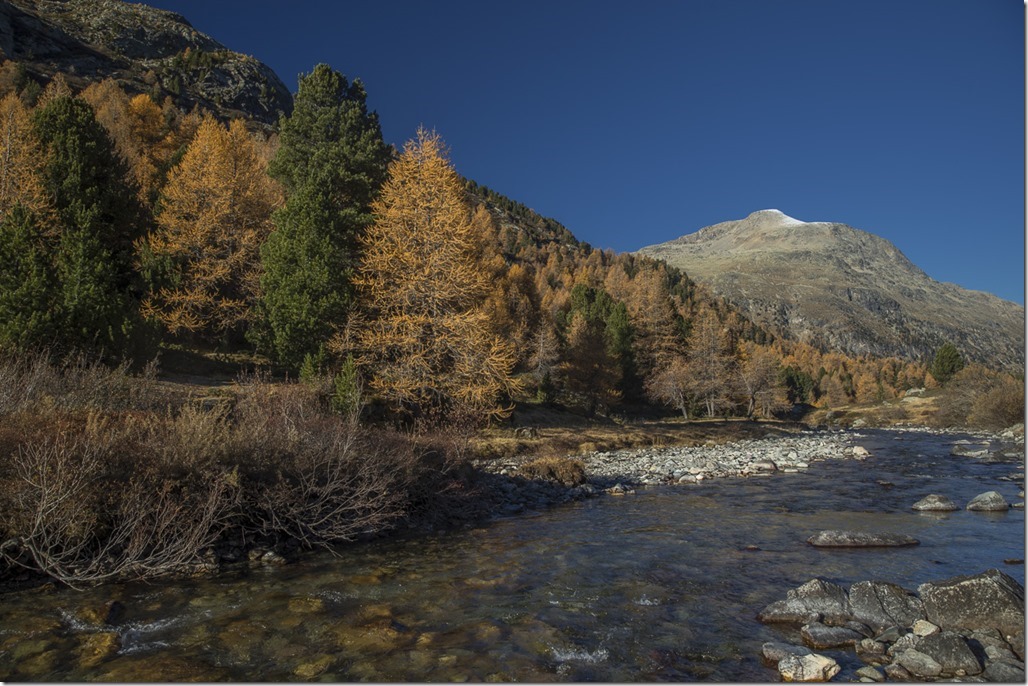 Eventually I reached my starting position. There were quite a number of people there who wanted to go up to the lakes. The smart ones were waiting for the pre-booked postal coach which was driving up the valley and the not so smart ones were starting to hike here. I was in the second group … Looking around I could not see anyone who was dressed for more than an easy and short hike, which is perfectly fine.  I just had slightly different plans in mind and was dressed in a slightly different manner. 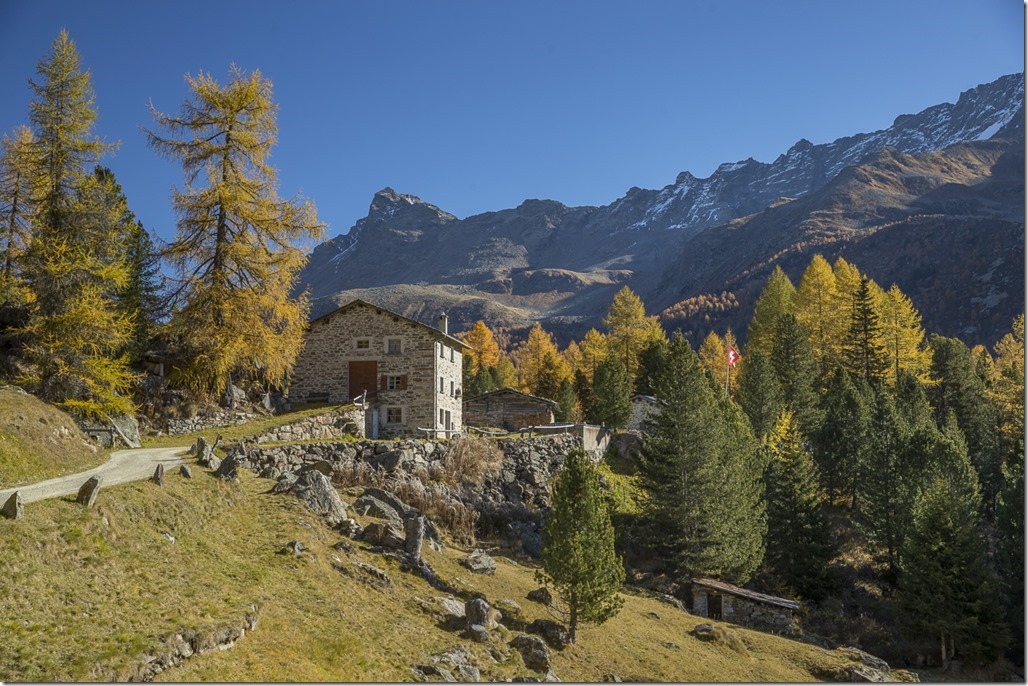 The hike on the gravel road was easy and I was studying where my “real” hike would start. I figured out that I could do a short-cut by just going up a very steep meadow. So I left the road and started to find my way up the hill as there was no trail. 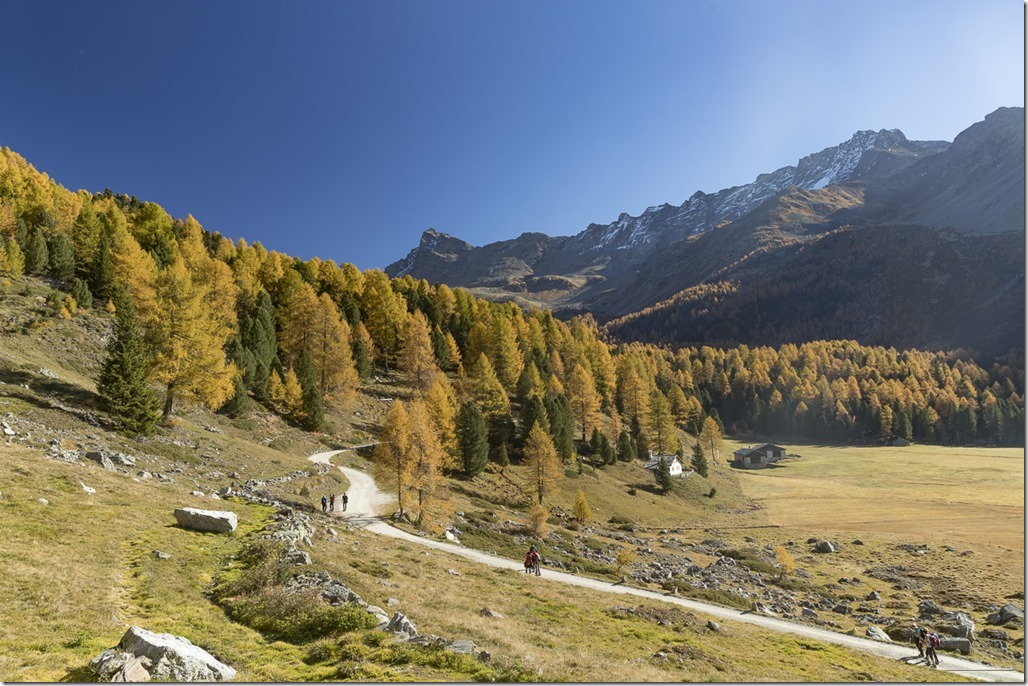 From below it looked much steeper than I was in reality. The only annoying thing was the somehow spiky grass up there. Whenever you had to touch it in order to keep your balance it was stinging you. So I put the hands into the pockets of my trousers and balanced in another way. In the end the short-cut wasn’t so much of a short cut simply because I had to stop too many times to take pictures. And reading the trail description in my hiking guide just didn’t make sense today. Things just wouldn’t fit regardless how you turned it around. Whatever! This hike was easy, the direction rather obvious and no dangerous places to avoid. Even though I felt a little bit tired I had a very good pace and soon reached a little lake not far from the summit. As the place was protected from wind and the temperatures very comfortable I decided to take a quite dive into the lake. In the end the dive was rather quick and refreshing and I am inclined to add the word “too” to the refreshing statement …

From there it was just a short hike to the summit from where I could see the valley below with the two lakes for the first time. Really beautiful! 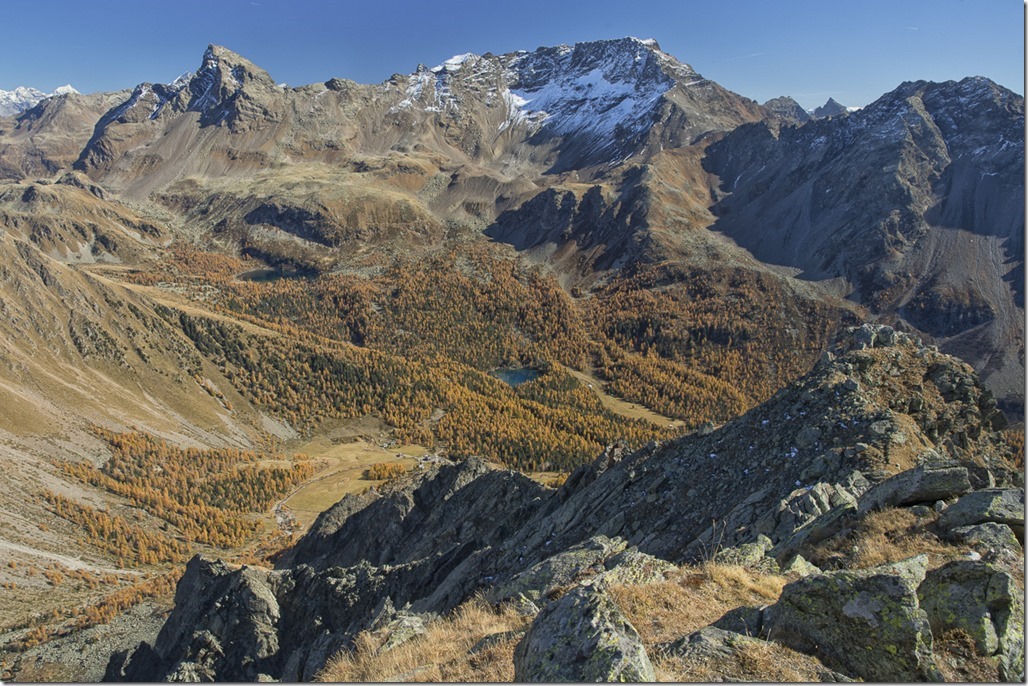 I took quite a long rest on the top enjoying the view. When you are on the top of a mountain you also want to go down at some point. So I was reading again in my hiking guide. “Go down the South ridge” was clearly stated there. Wait! That was where I had just come up! At this point I figured out why no description had matched before: I was doing the hike in the opposite direction than described in the book … lol … So I was trying to read the description backwards in order to figure out what to do. Easier said than done and I gave up before my brain would explode. The way down was again kind of obvious.

Panorama with the whole valley and Poschiavo in the far right.

I decided to take another potential short cut which considerably upgraded the difficulty of my tour but still was on a level where I could hike on and accelerated pace. I didn’t want to miss the two lakes in the valley and my fear was that the sun was setting before I could reach them. 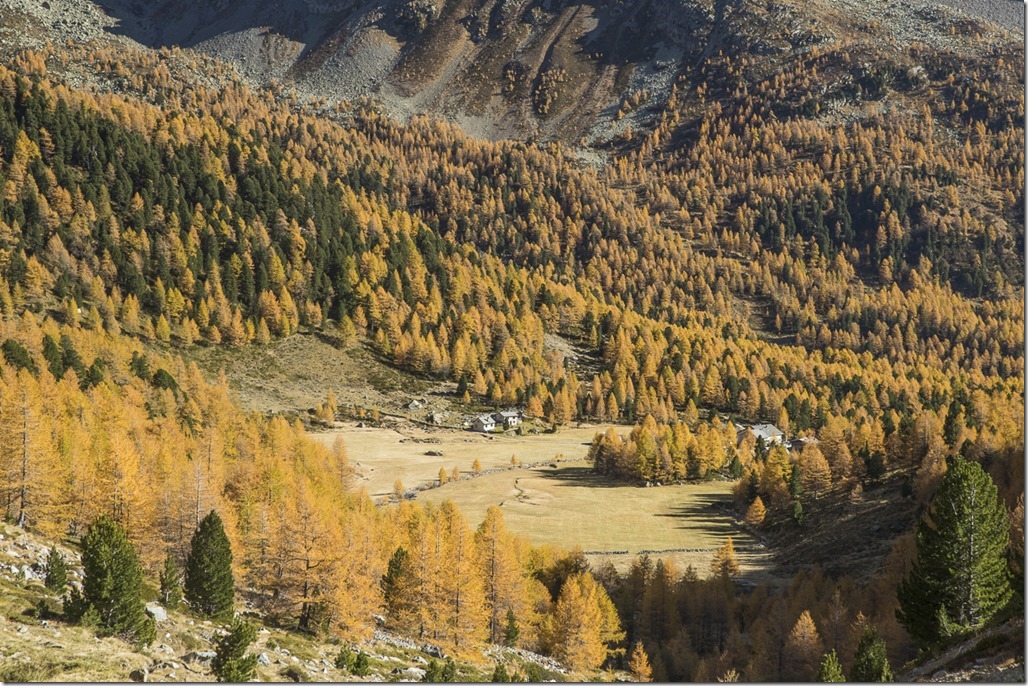 When I reached the lake there were still some people around. Even though the water level was not at its maximum it was still a nice view. Artistic picture of the lake. I went around the lake to get different views.

Selfie Alert! I used kind of a monster selfie stick for the picture Then I hiked to the second lake, the “Lag da Saeseo”. I would say that the timing was perfect. The sun was already moving towards the horizon casting a fantastic color on the landscape. The ones still here could also witness how two women tried to take a bath in the lake. The preparation was very dedicated and I was impressed. But when they entered the water it was immediately obvious that they are just human beings and water of 5° just doesn’t work out for this species …

The picture with many layers. 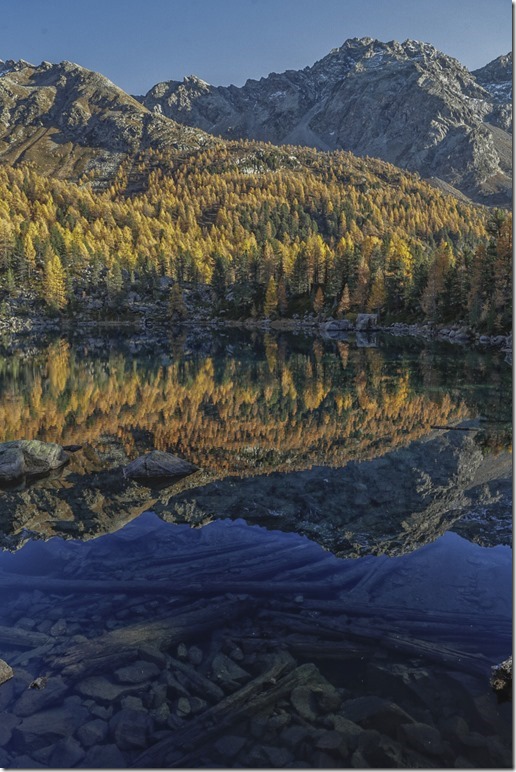 After the sun had set I was slowly walking back to my car. It was very quiet as only few people had stayed until sunset. It was getting dark and the stars started to appear in the sky. This was the right place to be!