After saying goodbye to our friends we were going wild! We were flying to the “Wild Coast” in Eastern Cape. Beside the fact that this is a very nice area it was also done to reduce the time required for tomorrow’s flight back to Cape Town. Huch! “Cape Town”? That already sounds like the end of our journey. Forget about it, first we are going wild! 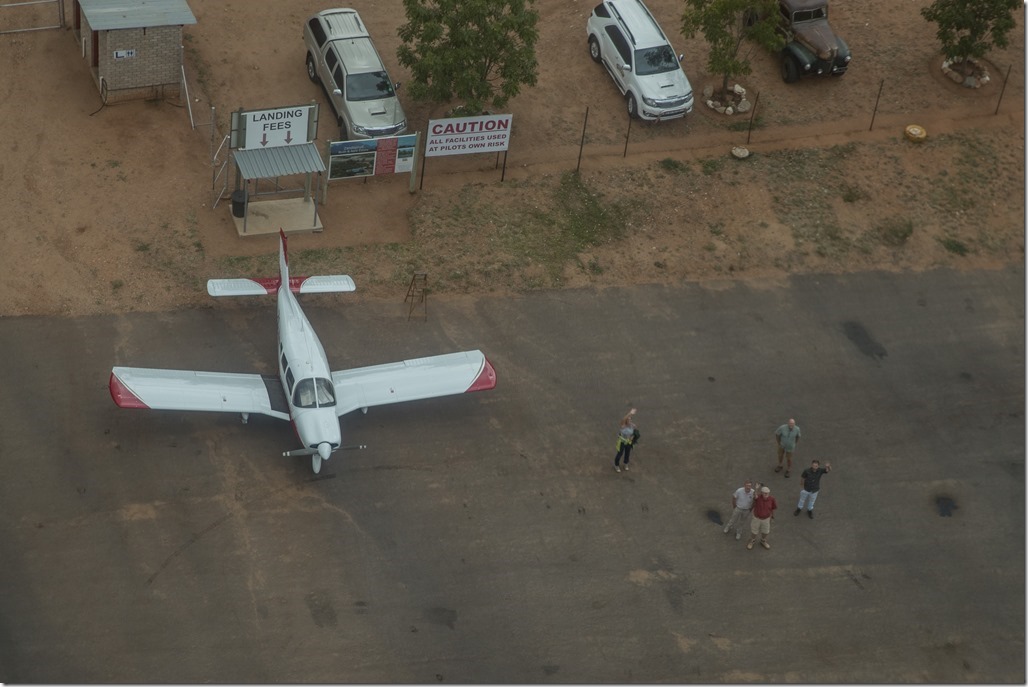 Let’s call this the “Dragon lake”. The dragon is slowly approaching the sea. 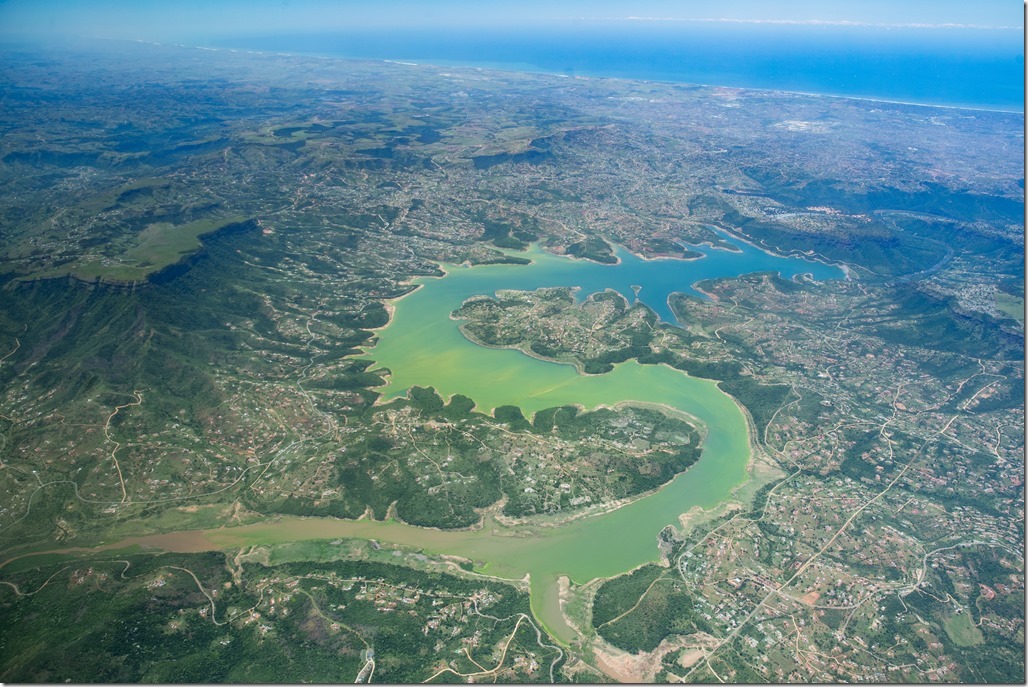 Interesting shape of those fields. I am wondering if a graphical designer was hired here. It looks a little bit like a frog, doesn’t it? 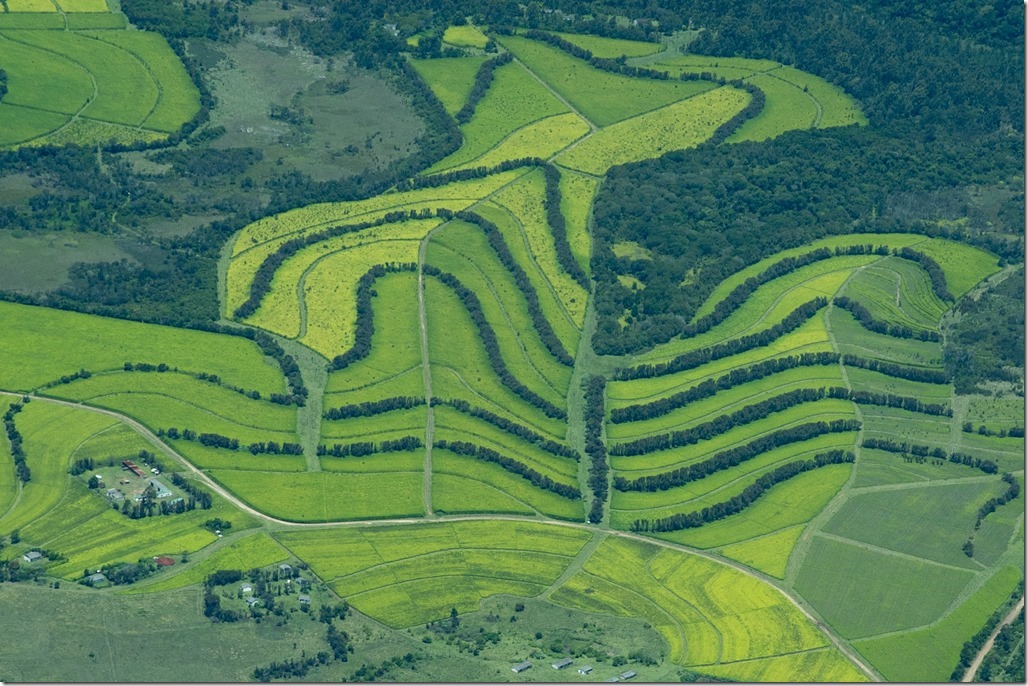 Approaching the St. Johns Airstrip. You could also say you are landing on an aircraft carrier as on both sides there are some impressive cliffs … 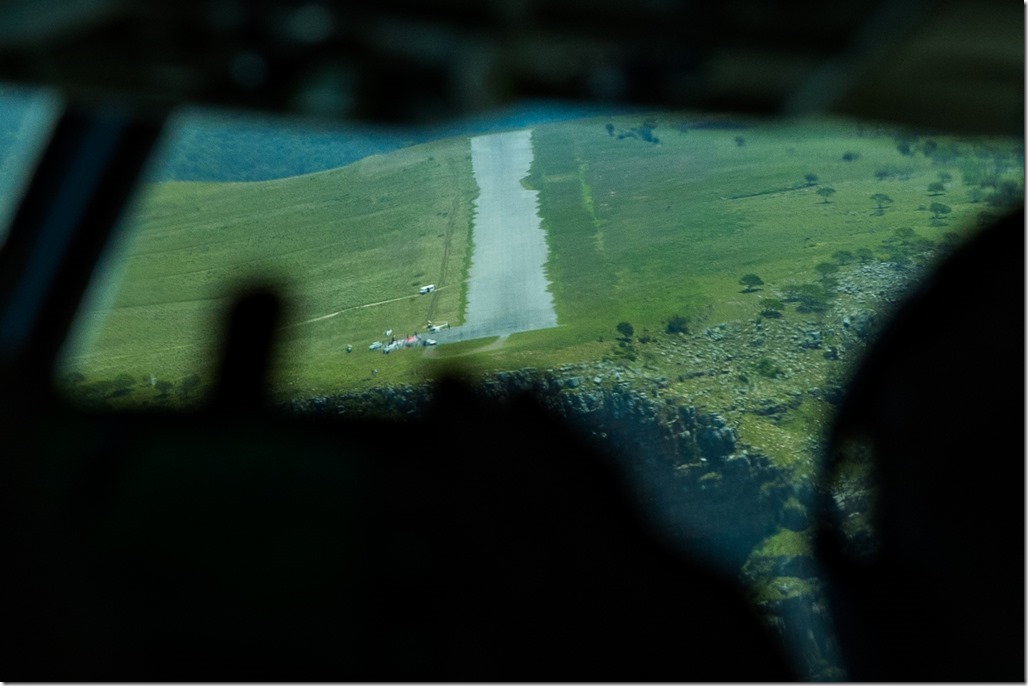 Unloading our plane after landing. 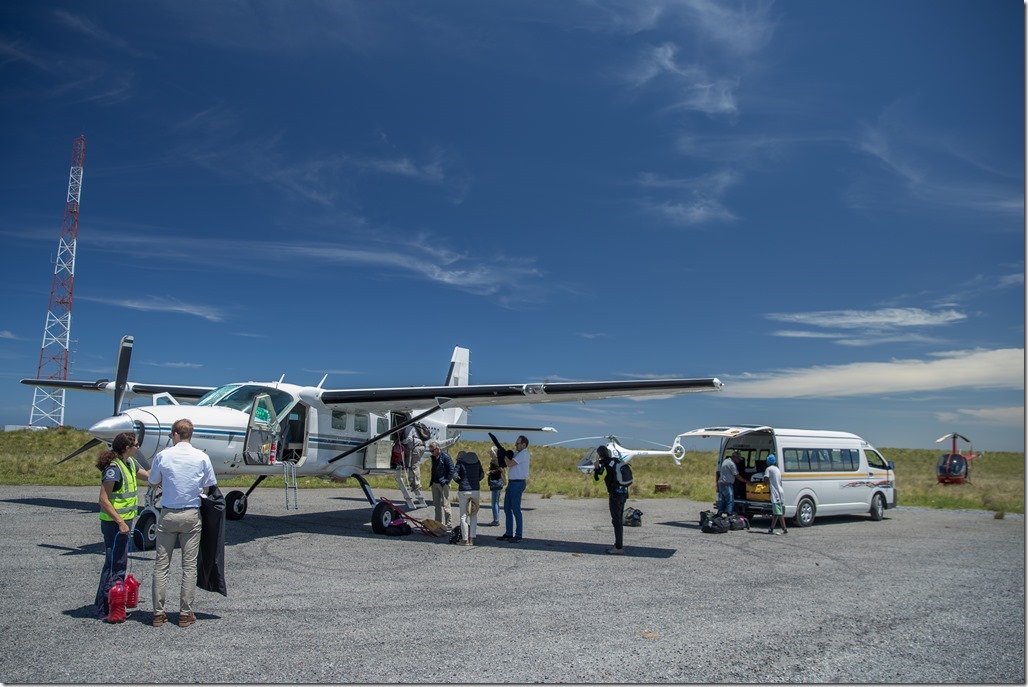 Today we picked a slightly different shuttle to the lodge. Just kidding. There was a number of small helicopters here for some kind of training. 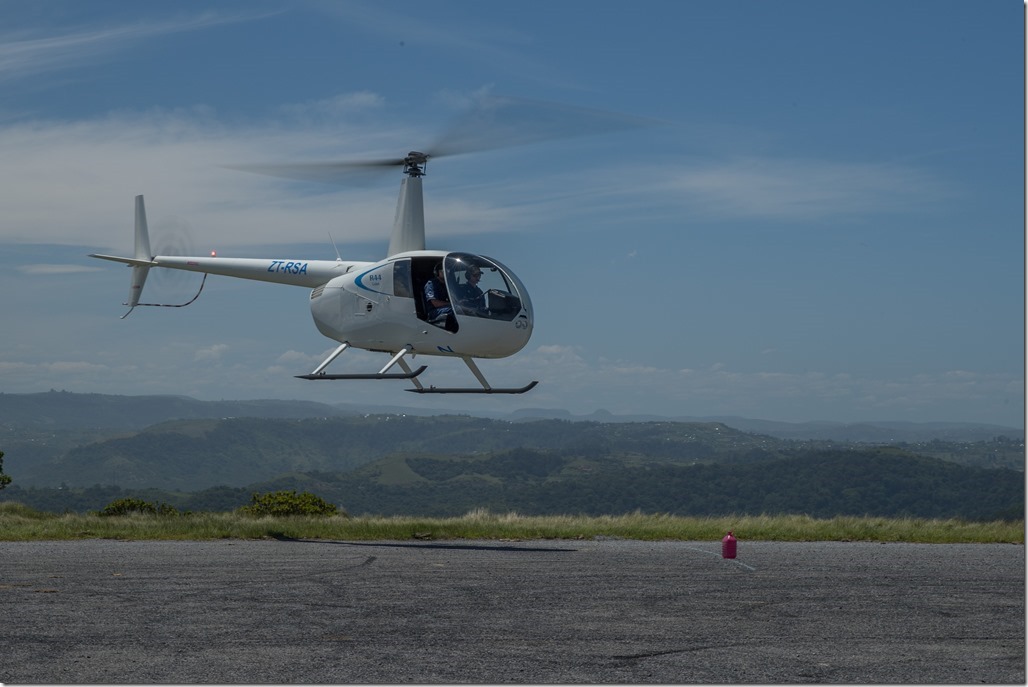 For the last night we were staying in a lodge which was – from a distance point of view – quite close to the airstrip. However the mini bus was not made for the kind of roads leading to the lodge so the driver was taking extra care to not break anything and the ride took 45 minutes. It was well worth the time as the lodge was located in an amazing location overlooking the area. 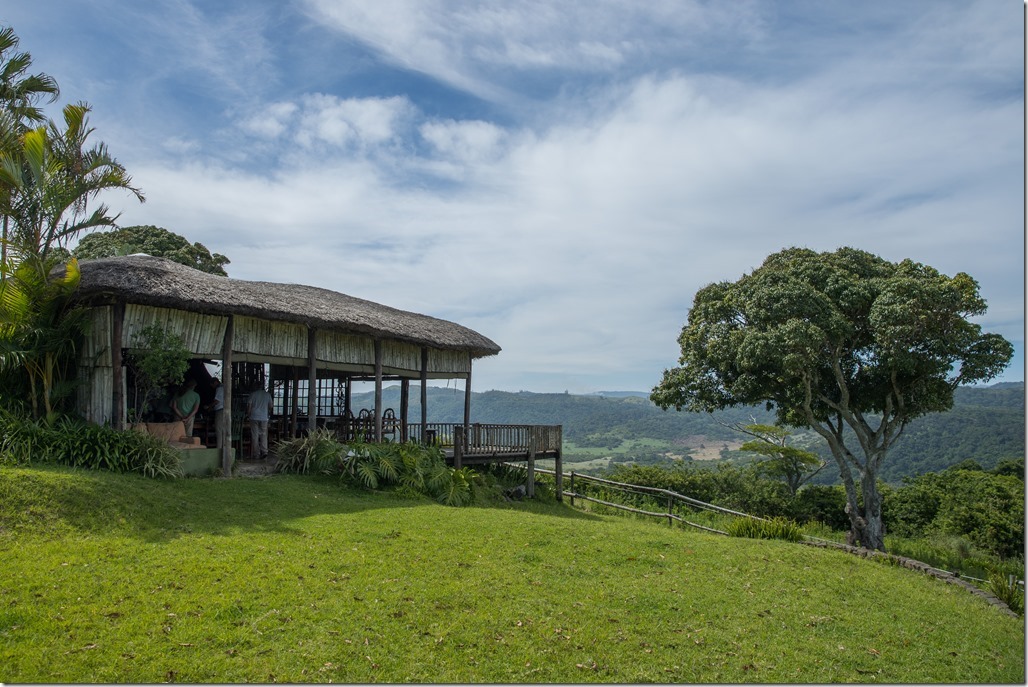 Nice view from the lodge to the ocean. Even though the sea seems far away on this picture you could clearly hear the waves. The lodge had quite a number of animals around. Unfortunately there was not enough time to continue our horse riding experience from Madagascar. 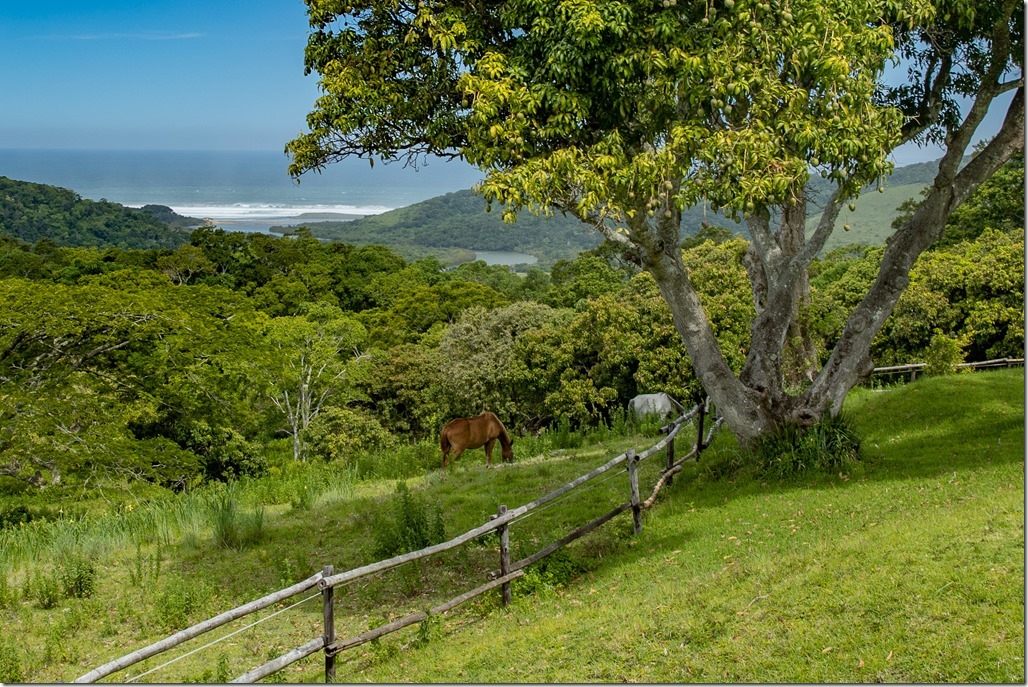 There were also cats which would if not watched continuously soon be sitting on the table and stealing our food. 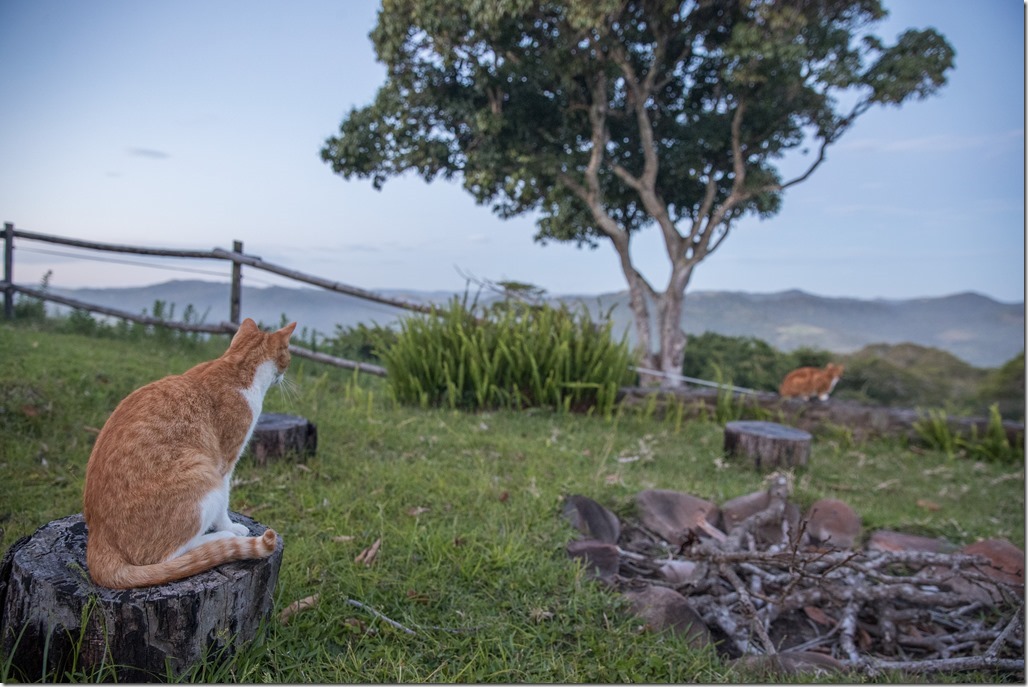 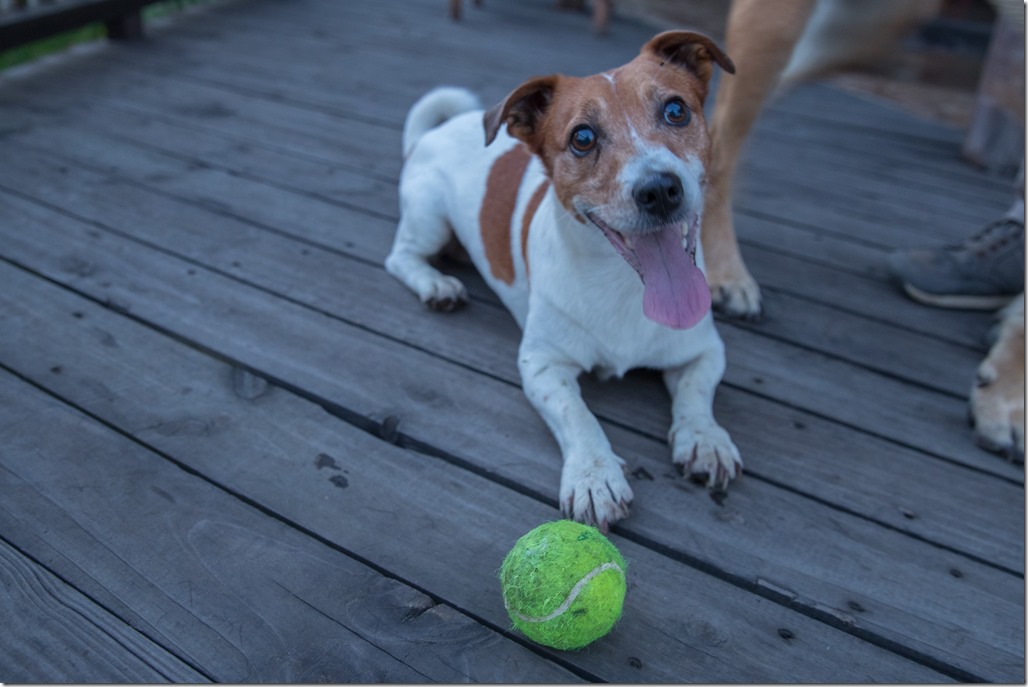 Given the beautiful landscape this was also a unique opportunity for aerial photography. While some of our group decided to kayak down the river to the sea I was planing to do some action with my drone. Action is the right word for what I was planing as hovering around 10 meters away from you I would not consider as “action”. The plan was slight more complicated than usual because I could not use anymore one of my  two mobile phones to get the video from the drone: My private one I had dropped some days ago which had converted it into a brick of non-functional electronics. And the company phone had decided to stay in Madagascar … So I had to use my tablet to get the video feed from the drone. This was working perfectly fine with one minor glitch: The tablet had only 13% left of battery. Trying to recharge it in the lodge was failing as this was overloading the solar panel driven electrical supply. So 13% remaining battery it was and off I went with the drone. I was following the river trying to spot the kayaks of our group. 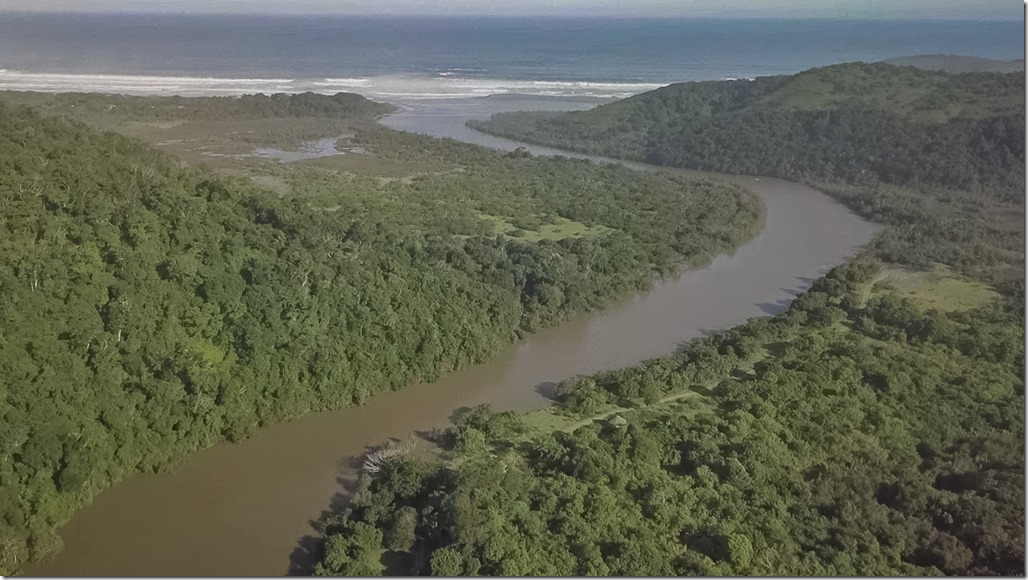 I wasn’t able to see them during the flight but later analysis of the video showed them just reaching a bank of sand. At this point the drone was 2.4 km away and the video signal and control still perfectly fine. So I decided to do some scenic fly-overs over the beach before returning. That was the plan. But this plan never happened! Because my tablet decided to shutdown. And with the tablet gone I had no video signal and no way to figure out the orientation of the drone and where I was flying. I tried to bring it back based on the last known orientation but eventually the control signal got weak, meaning the drone was not anymore in line of sight. As a last resort I pressed the “Return-Home” button which should bring the drone automatically back to the place it had started but this obviously doesn’t work in this kind of terrain. After waiting for 20 minutes it was apparent that the drone had run out of battery without returning home and was now waiting in some tree till the end of time for rescue … R.I.P. 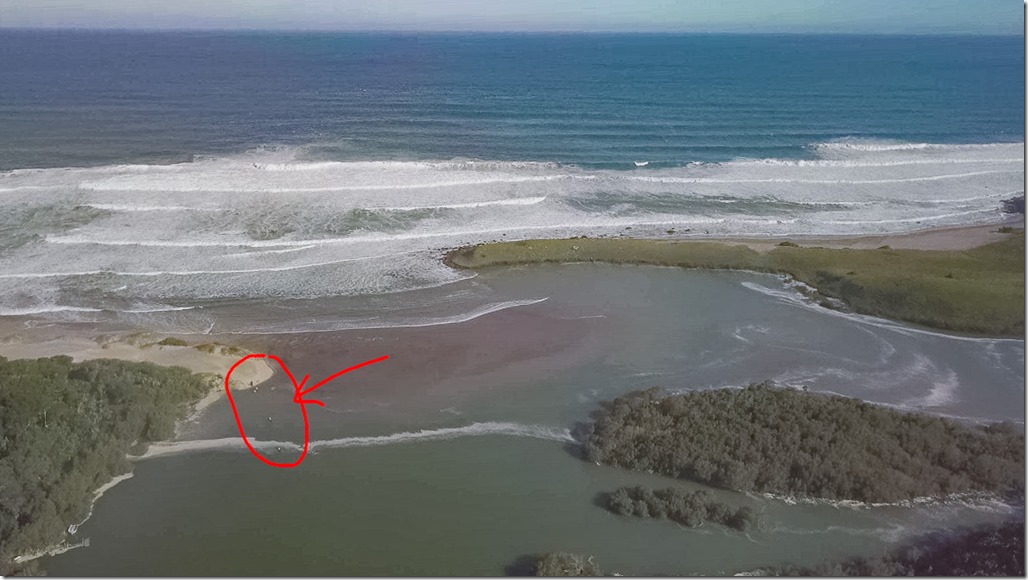 As the night was setting we had a fantastic barbecue! And there is still a chapter to be told about my drone: No, it didn’t show up miraculously hours late. But our group was secretly collecting money to replace my missing drone and handed it to me during dinner. What a big surprise! And thanks a lot to all! 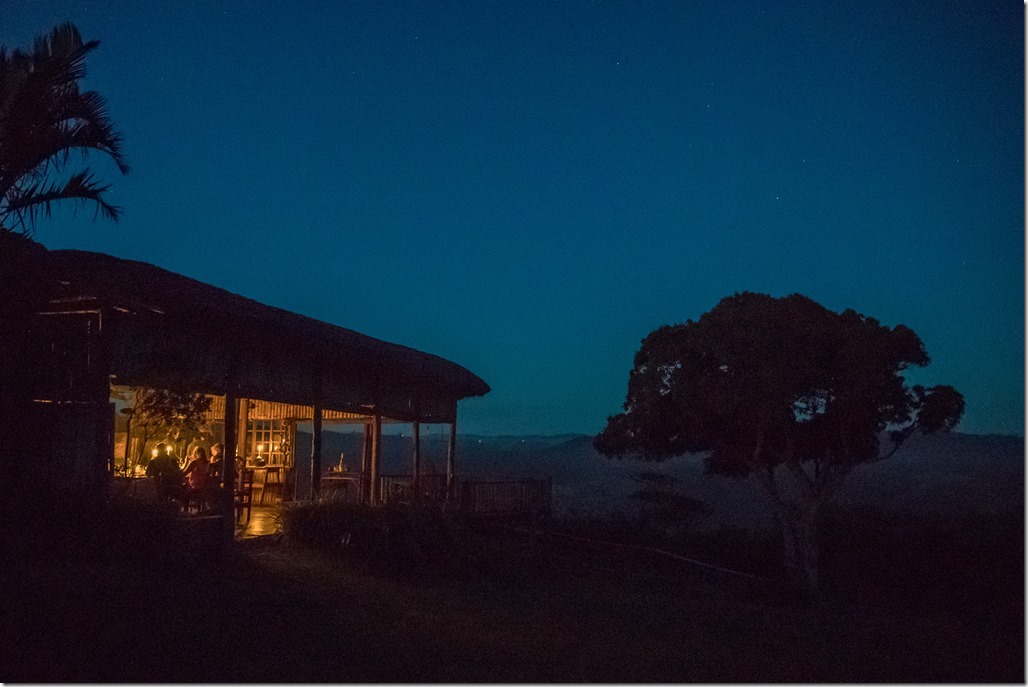 I took the opportunity to take a picture of the sky where you can see the two Magellanic Clouds, something which is not visible in the northern hemisphere. 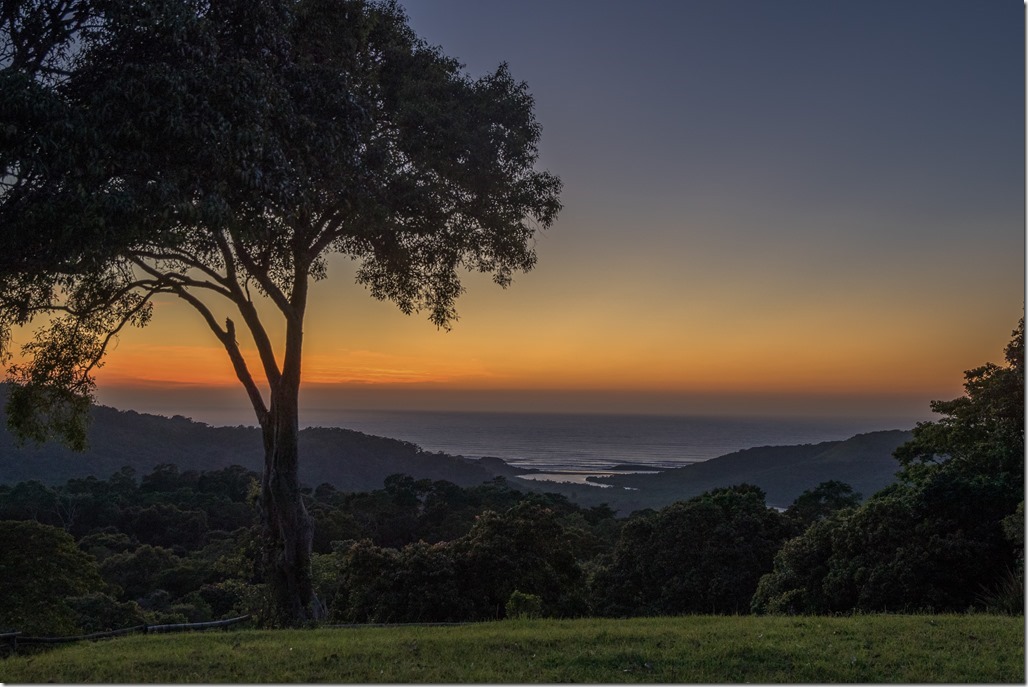 And the view from the dining room. 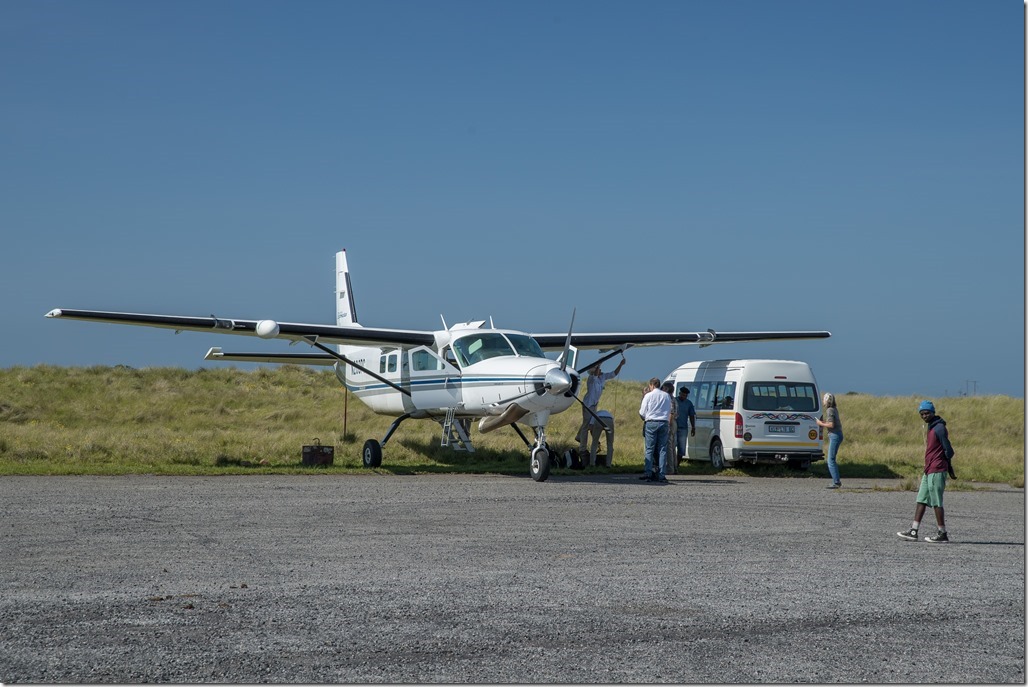 … not good, not good at all. Still cows on the runway! Today’s flight was all along the coast. So there was a lot of possibilities to take some pictures of wild shorelines. or sandy beaches with turqoise water. Final stop in Port Elisabeth to refuel the plane. Even on the last day of our journey the N208PC repair crew had things to fix. It was carried out by the “thread and needle” sub-group as the “cable binder” group was  clueless of how to prevent feathers from leaking out of down jackets using cable binders. 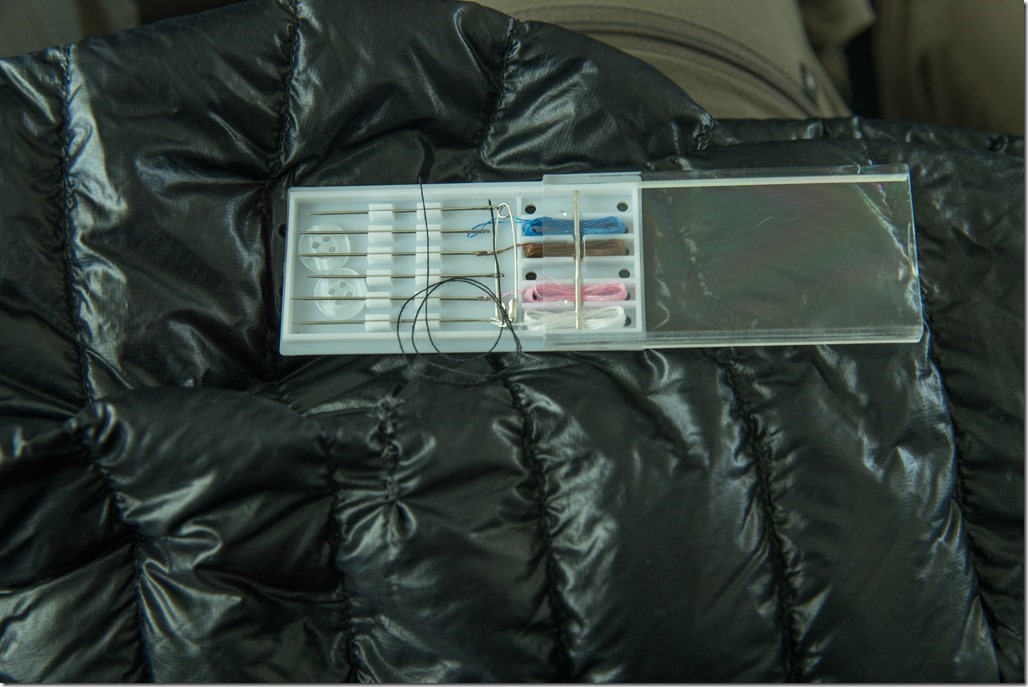 As we were getting closer to Cape Town we were flying over areas where wine is produced. At some point it aparead again on the horizon: Cape Town. The sky was blue and now clouds were covering the Table Mountain. Due to the traffic on “Cape Town International Airpot” we had to do one loop which brought is just in front of the city. Perfect I would say (at least for the passengers). Panorama shot with the whole Cape Peninsula in the back

Another view of Cape Town just before landing.

After the landing the obligatory group picture. Traveling with all of you has been a realy pleasure for me! Thanks a lot! And as obligatory as the group picture  s stopping at the “Harbour House” in Cape Town and go for the seafood selection! Delicious! Unfortunalty, every journty eventually comes to and end and this is it! Tomorrow I will be flying back home and go back to work. But I can continue dreaming of this wonderful journey and all the things we saw.

This is just a bonus, sunset somewhere over Sahara on the way back. Last but not least, the Link to the GPS track of the whole trip: