Uganda part I – An idea and its execution

I have talked a lot about having a plan here and there. And if that plan didn’t work out for some reason there was always plan B and sometimes even C. Sounds all totally fine and how you should approach things. Really? Yeah, sure. But every rule has its exceptions. This blog is about this exception and not the rule nor a plan, I would call it an exceptionally planless endeavour into the unknown. Sounds interesting and challenging and with a lot of surprises. But let’s start from the beginning!

When we were talking about things to happen in 2018 it turned out that my friend Georg had 2 weeks in January where he had nothing to do but was already in South Africa. Of course it doesn’t make sense to return for 14 days to Switzerland. So, in a split of a second it was decided that we would meet in the middle, which is Uganda, and do something there. We agreed to just rent a car for the duration of our trip and not spend any time time with additional planning. Everything else should be decided on the spot.

I had to shift my departure by one day at the very last minute. Since we hadn’t  booked anything this was not that much of an issue. However on the morning of the flight my flight to Brussels got substantially delayed. I was already accepting the fact that I would spend a day in Brussels waiting for the next flight. But luckily the pilots found some kind of short-cut and reduced the delay substantially so I was able to get my flight from Brussels to Entebbe. Actually the flight had a one hour stop-over in Kigali, the capital of Rwanda, but since you don’t need to get off the plane it is not an issue. 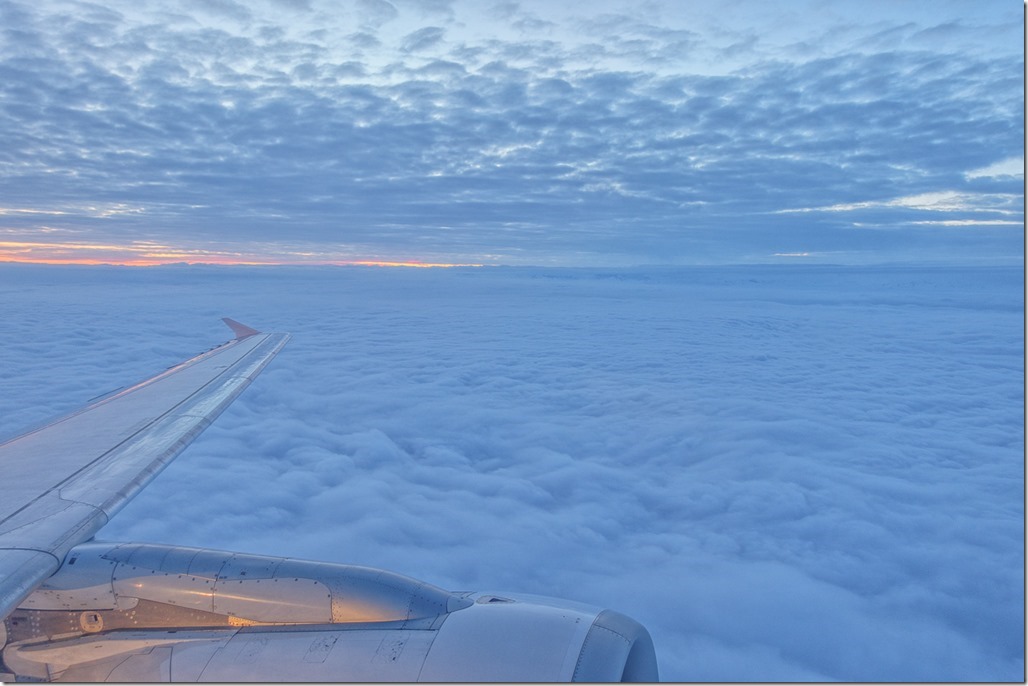 Tips and Tricks from Brussels Airlines in case you can’t sleep: 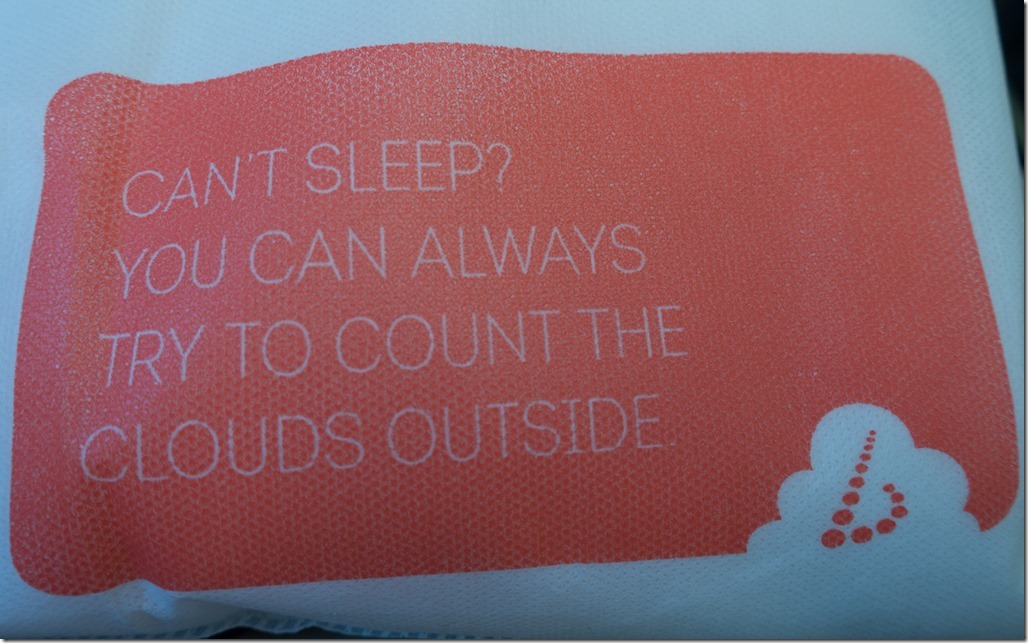 Since the flight was not fully booked I had quite some room for me and didn’t have to do some mental yoga with my legs. 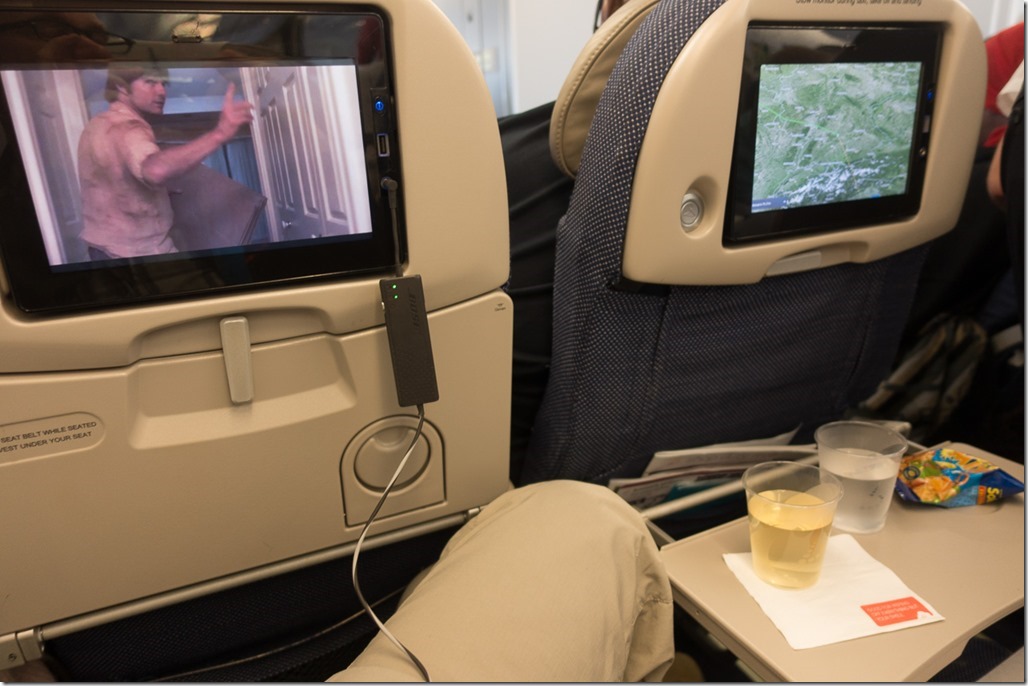 My first interesting encounter with the country Uganda was at immigration. Even though I had an e-visa it took ages to get through immigration. The fact that I was sitting in the rear of the plane didn’t help either. The airport had like 10 counters for immigration but only 2 were open. The visa was printed out on the spot and even as a photograph of you. After having the passport sorted out I had another episode with Uganda immigration: Every piece of luggage is x-rayed and of course they found my drone. As it turned out drones are only allowed with special permission. Of course I didn’t have any permission so my drone was confiscated … The real problem was not this but to get some papers so I would get it back again when leaving the country. Getting those papers was pretty challenging as everybody was very busy doing nothing. I was running around in circles. Eventually one lady was so kind to write something down so I could finally leave the airport. I later did some research concerning drones in Uganda and the bottom line is that getting an official permission can take 3-4 months and probably will cost more than the drone itself… Anyway one thing less to worry about. More time for relaxing …

For the first night we had our hotel very close to the airport and Georg was already waiting for me outside. It was very nice place with a lot of green stuff around. 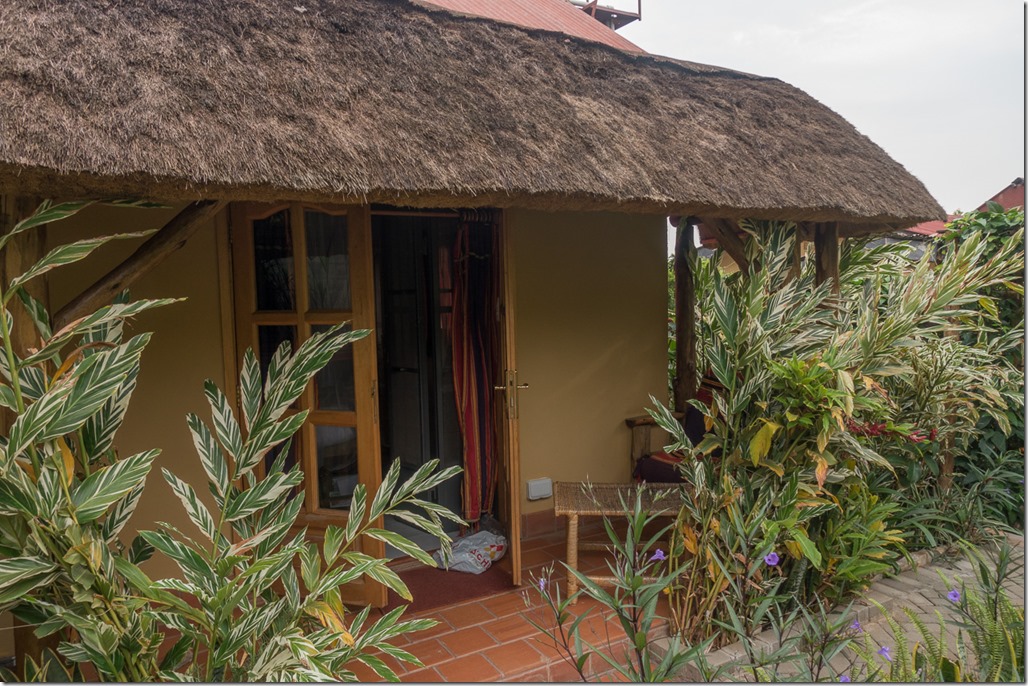 Mango trees in the garden. 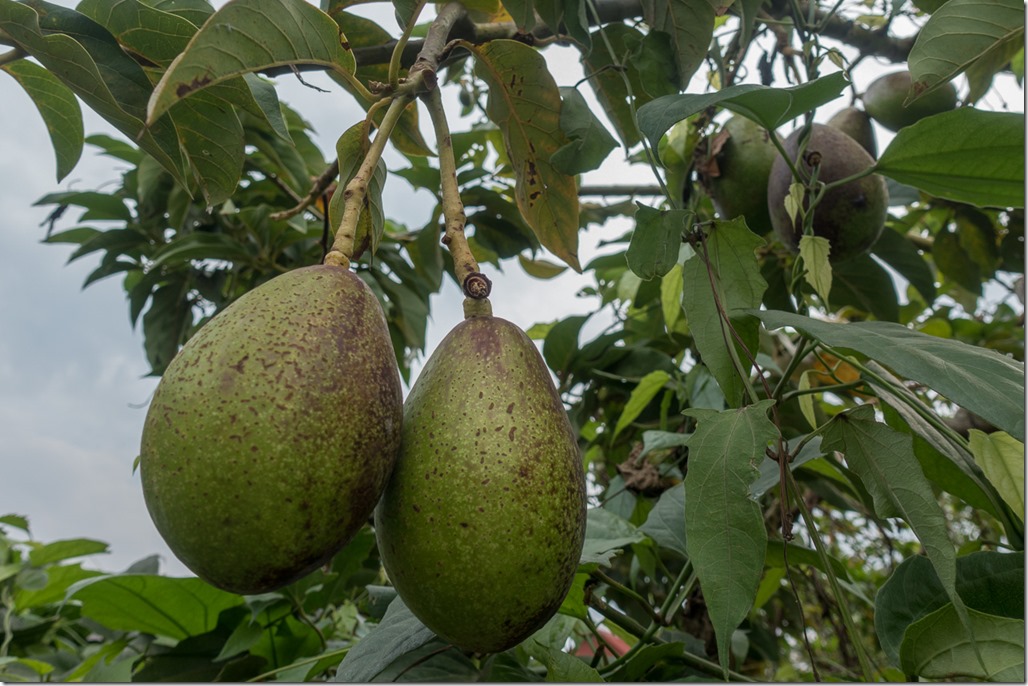 So there we were and during breakfast it was time to figure out where to go now. We decided to do a circle around the country starting into the northern direction first. Our goal was to reach the Kidepo Valley national park which is known for its remoteness and adjacent to South Sudan. Of course you can not reach the park in one day so our first destination was Mbale which was around 250km away. At this point I have to mention the fruits you are getting here. They are just from a different planet, unbelievable delicious. 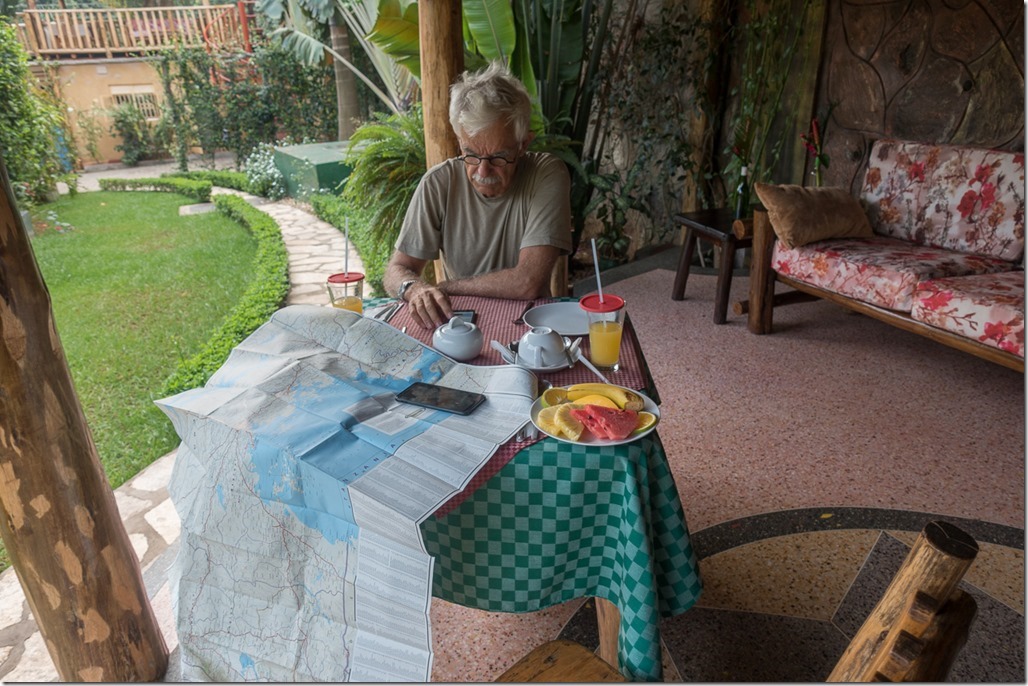 We were so naïve to think that we could get to Mbale in one day. The first challenge was to get through Kampala which can take a day on its own. Kampala is the capital of Uganda and is well known for heavy traffic. And that is what we found there. The number of lanes on a road is not a given and adjusted accordingly if the traffic situation demands it. 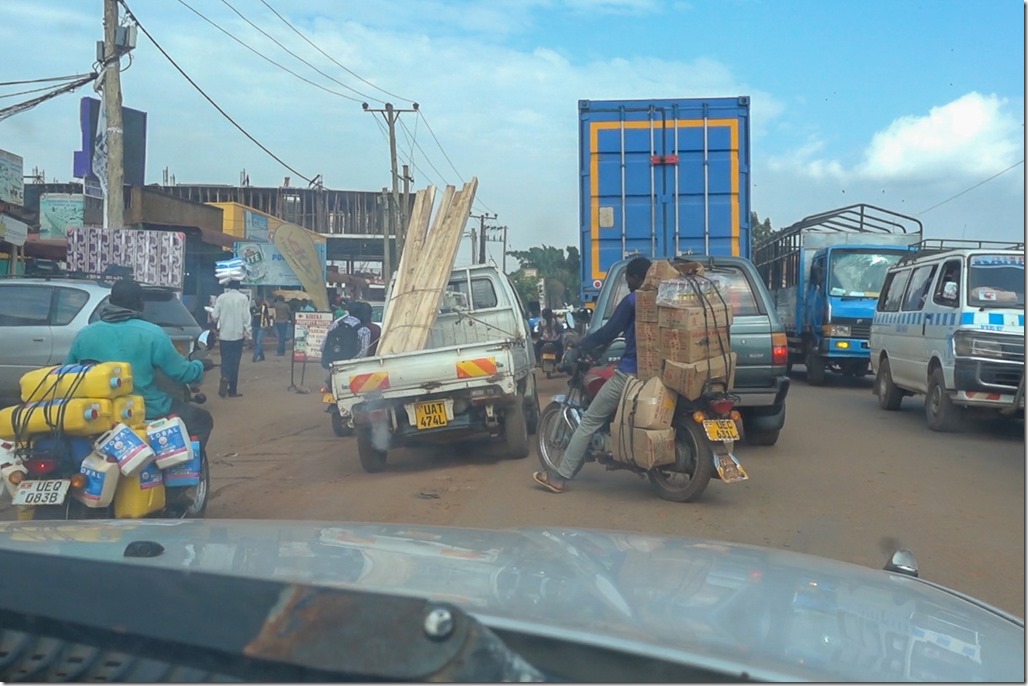 Even if you think there is definitely now space on your left for something else you can see moments later a car overtaking you there. Empty space between cars is filled up with motor bikes which not necessarily have to drive into the same direction as you do. And red lights are there to indicate that you should stop or drive or maybe do something else… 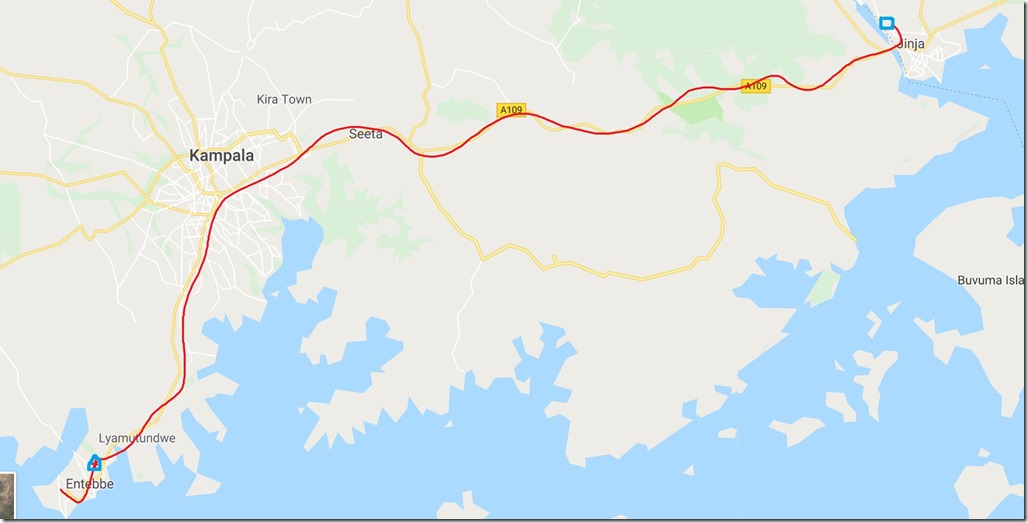 Not being able to drive fast has one big advantage: You can look around quite a bit. We saw some wedding car 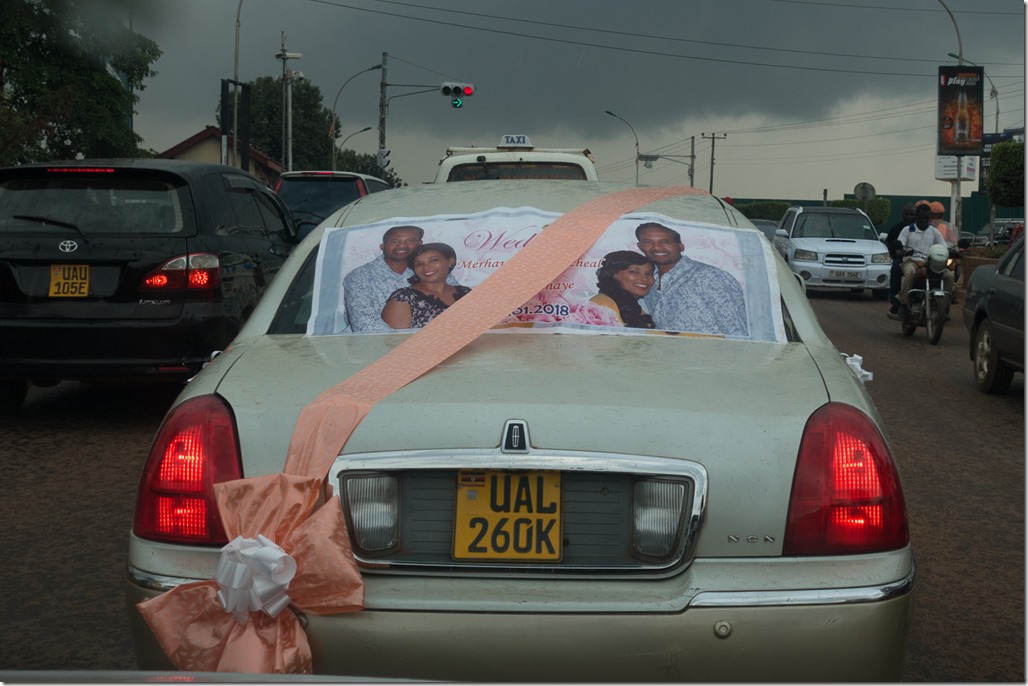 A butcher shop which was selling bananas as a secondary business. 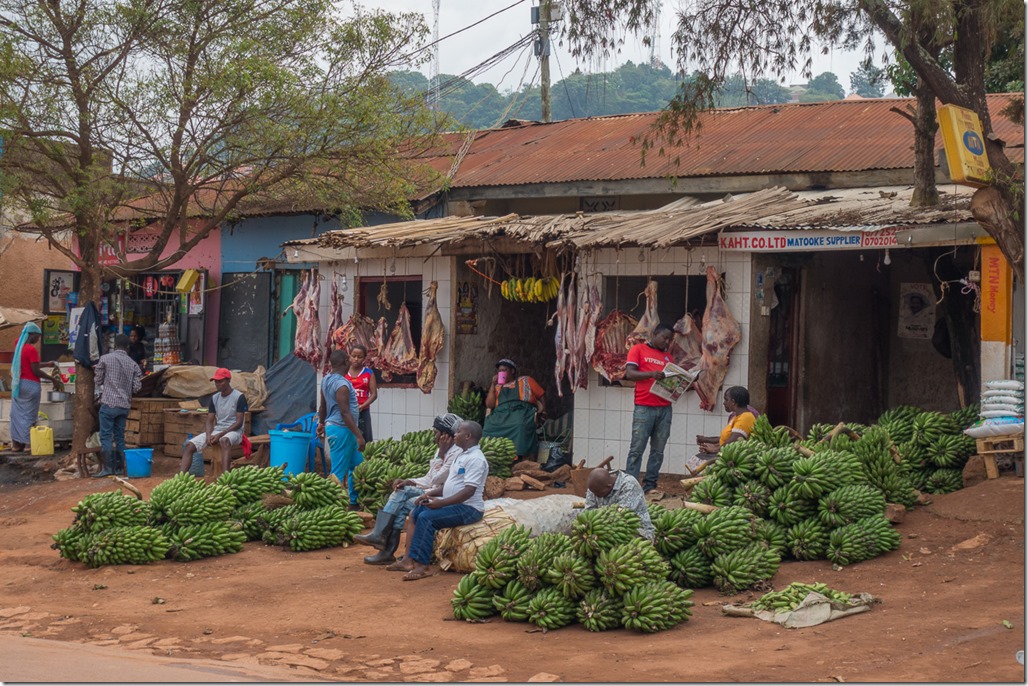 Or a fashion shop which the latest greatest dresses of Uganda 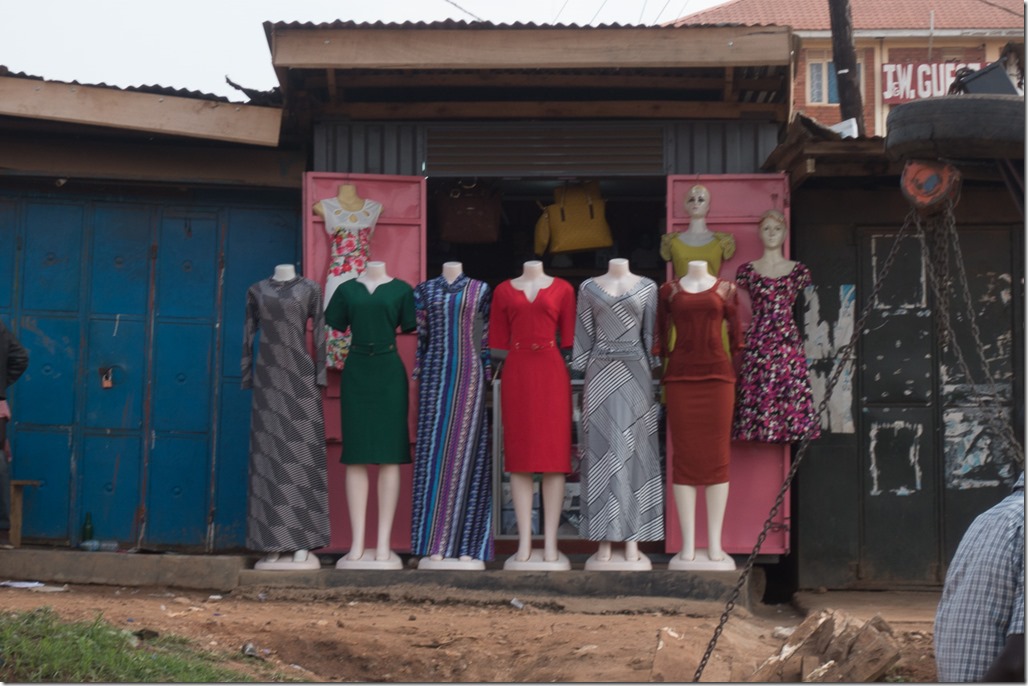 Or the Uganda version of IKEA. By the time this furniture will be bought it was exposed to 234 heavy showers … 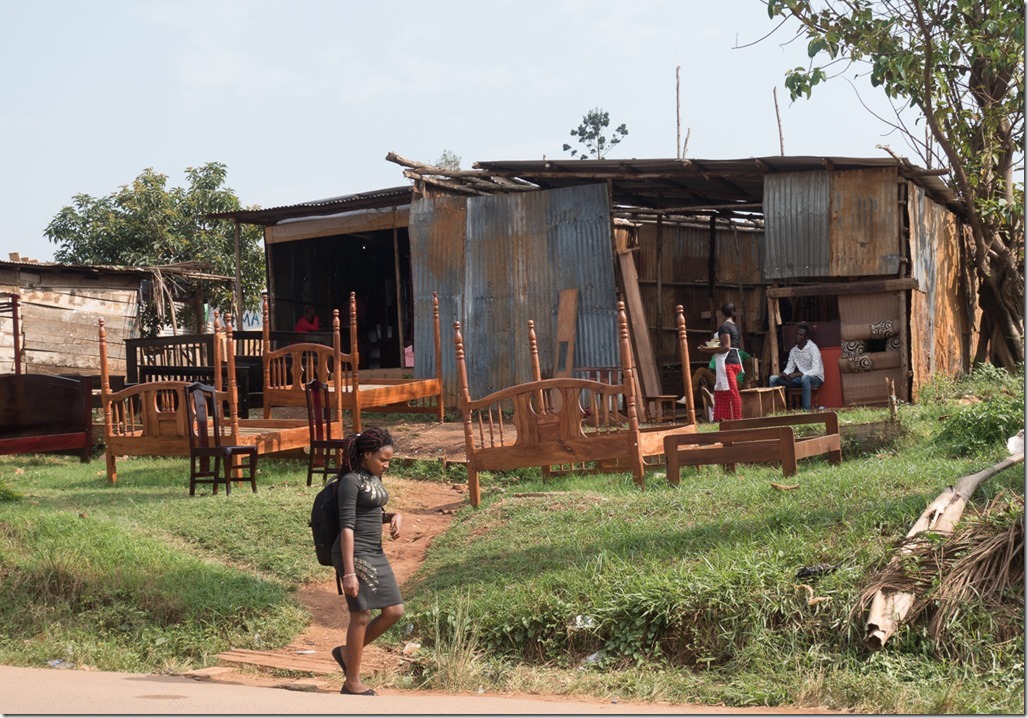 By the time we got out of Kampala we already had reduced our target for the day. In the end we didn’t even cover half of the planned distance so we decided to drive to Jinja which lies at the starting point of the “White Nile”. To find an accommodation we first checked the travel guide for Uganda, then booking.com and Airbnb and last but not least Google. Since I already had a local prepaid mobile SIM card and mobile connectivity was very good in this  region we could use Internet without limits while driving. We decided for a camp ground just at the river bed. That was the easy part. Finding it turned out tricky and as nobody knew about it.  When we finally found it nobody else was there and all the buildings were locked. So this was a dead end. 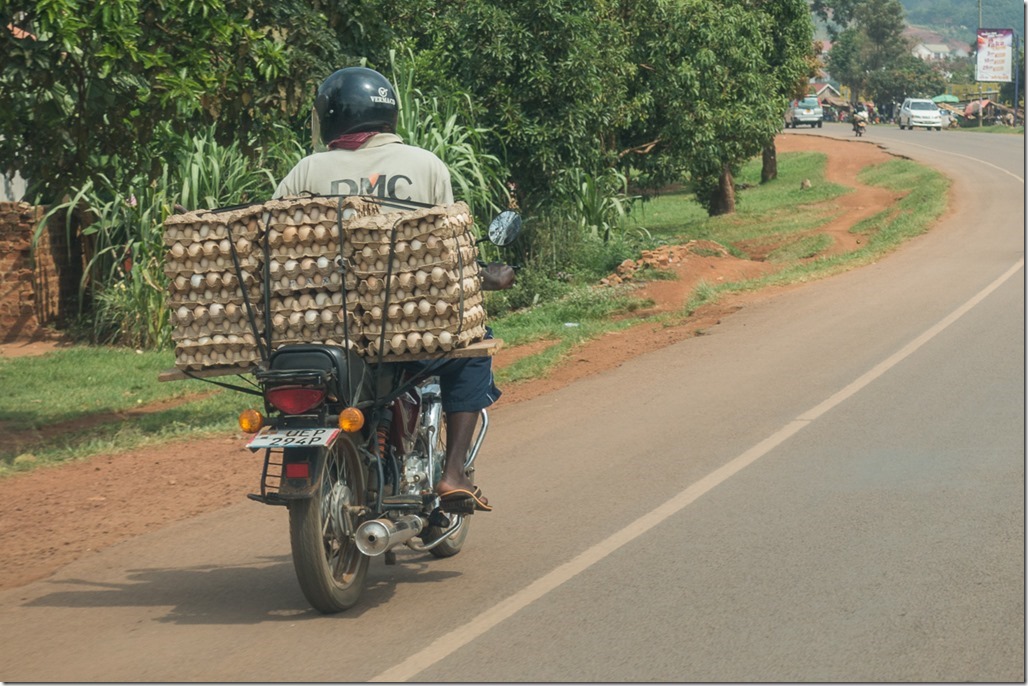 We learned that some of the ashes of Ghandi were scatter into there River here. 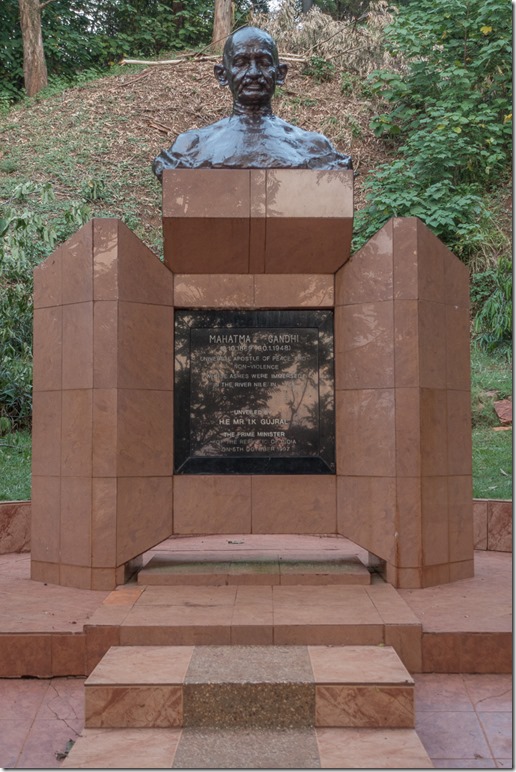 Nice sunset view at the Nile 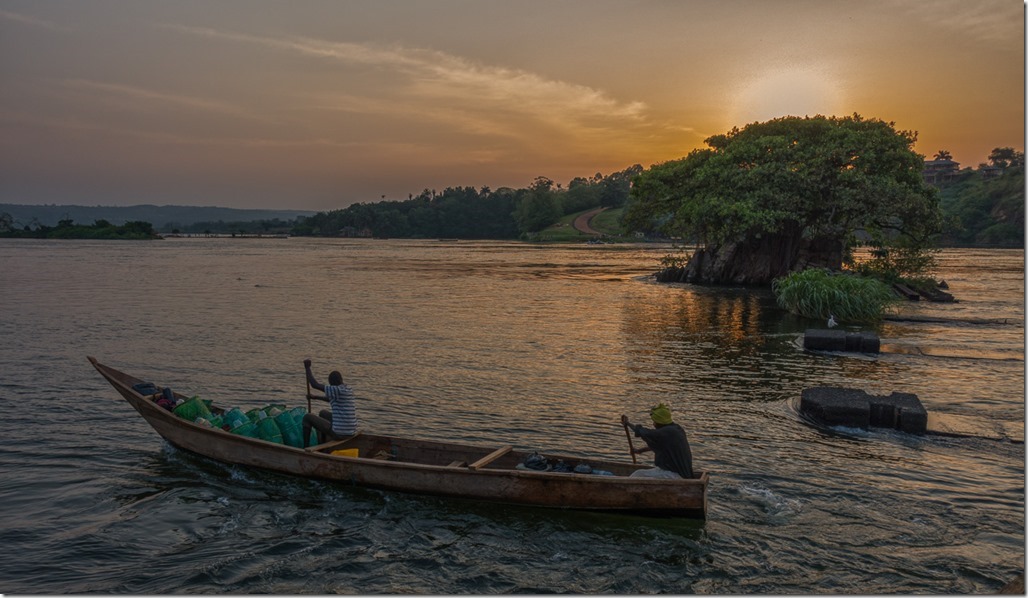 So we picked another camp ground around 10 km away. This camp ground was further up the river and even in a nicer spot. We could even get a tent with beds so our camping stuff could stay in the car. The investment was massive as we had to pay a 6 digit number for the accommodation…. The 160000 Uganda Shillings translate to 45 USD. We were arriving late but had the chance for a nice candle light/head light dinner with a couple of Nile beers. 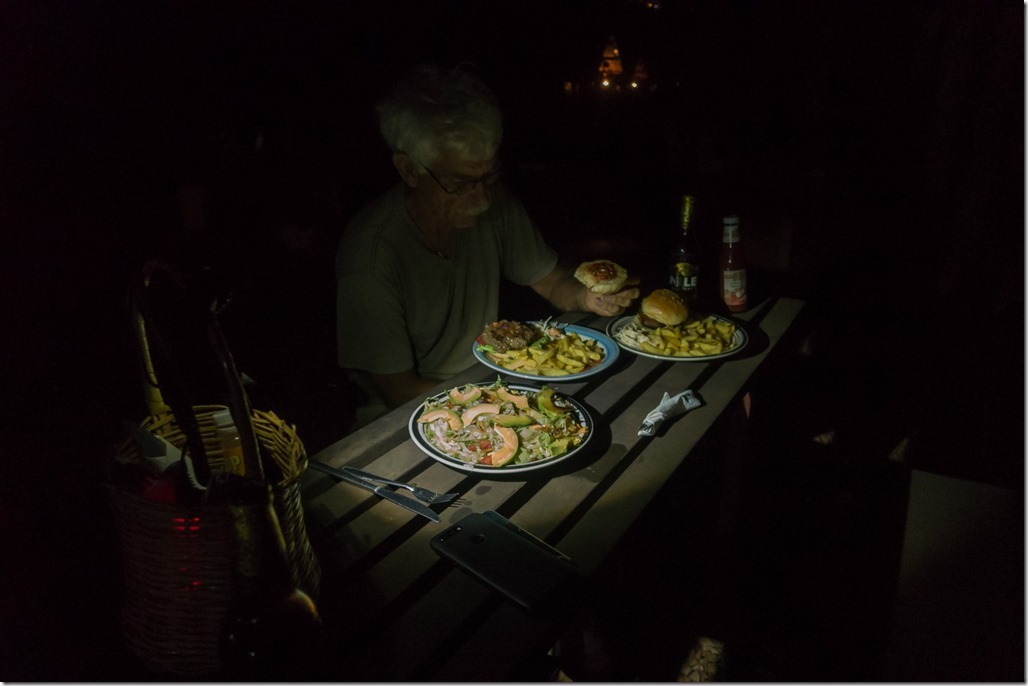 I would say so far everything is working as not-planned.