After not having done anything meaningful for two weeks my body and mind was asking for something, something which makes the difference between a weekend to forget and something worth remembering.  As the weather hasn’t recovered from the “let’s do some occasional rain” mode I ruled out camping. Actually I considered camping as an option for a split of a second as with my tent the weather is pretty much irrelevant. But then again I am too old for camping in full out rain just for the fun of it not to mention that there was a chance that the rain could turn into snow at some point. On the other hand I was also too lazy to search all the guide books and come up with something new. So I went back to some of my favourite tours, but this time I would skip the camping and do it in one day: the Palis Nideri and Schnürliweg circle tour on the Churfürsten mountains.  Palis Nideri I have done a couple of times before, the Schnürliweg only once two years ago. I also wanted to scout some nice camping spots on the Alp Tschingla as this is the perfect spot if you don’t want to go further up with a perfect view of the Walensee lake. 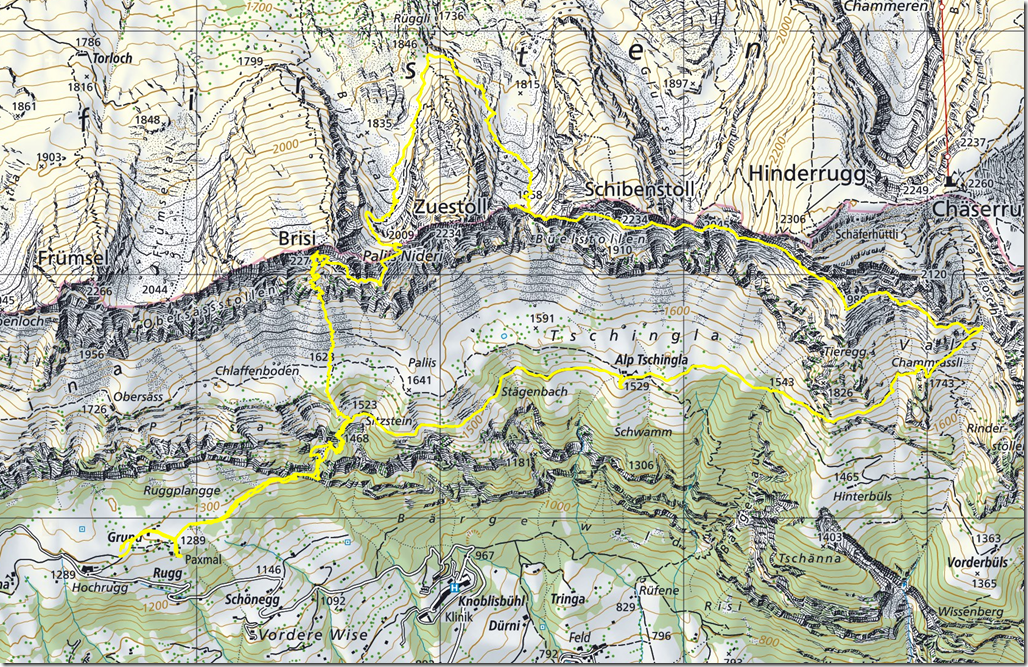 The first part of the hike was on an official blue-white-blue marked hiking trail to Alp Tschingla. Due the fact that the hiking trail was obviously also frequently used by cows and it had rained quite a bit during the last days it was rather difficult to get over it without making the shoes muddy. Luckily cows don’t seem to know how to used fixed ropes. So after the first section of ropes the trail was in a much better shape. The trail up to Alp Tschingla is frequently used, so the trail is well established and there are even some fixed ropes or other help in certain places. Somebody was even painting blue dots on the rock were you should put your feet. Later on the way down I met a father with his 3 kids. They also had their dog with them. He told me that the dog knows how to get up. There was only one place were he had to help the dog. 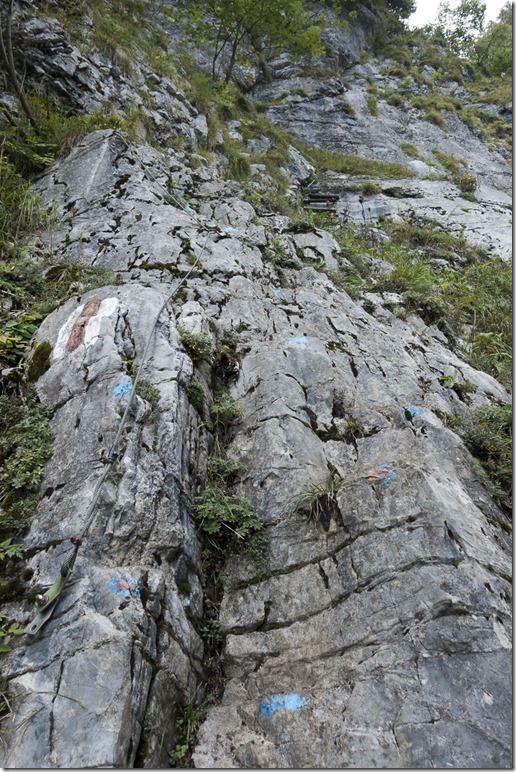 In various places of this trail there are signs with QR code which points you to a website giving more details about plants, the trail and the surrounding. Nature meets technology 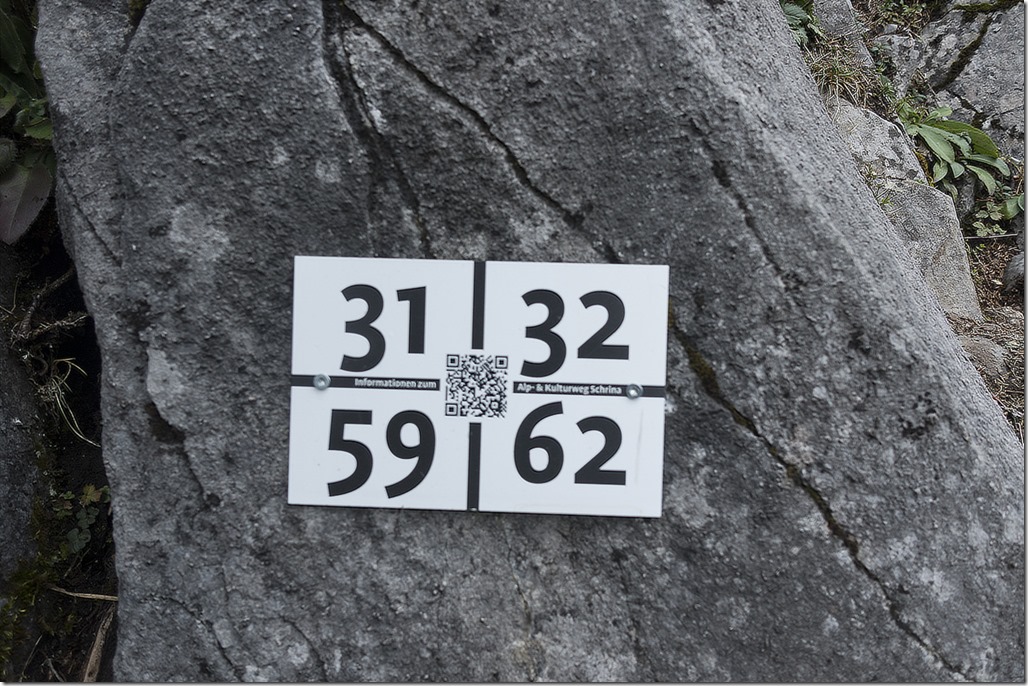 So far I was walking in a rather thick fog. But I was pretty sure that it would clear up later on. 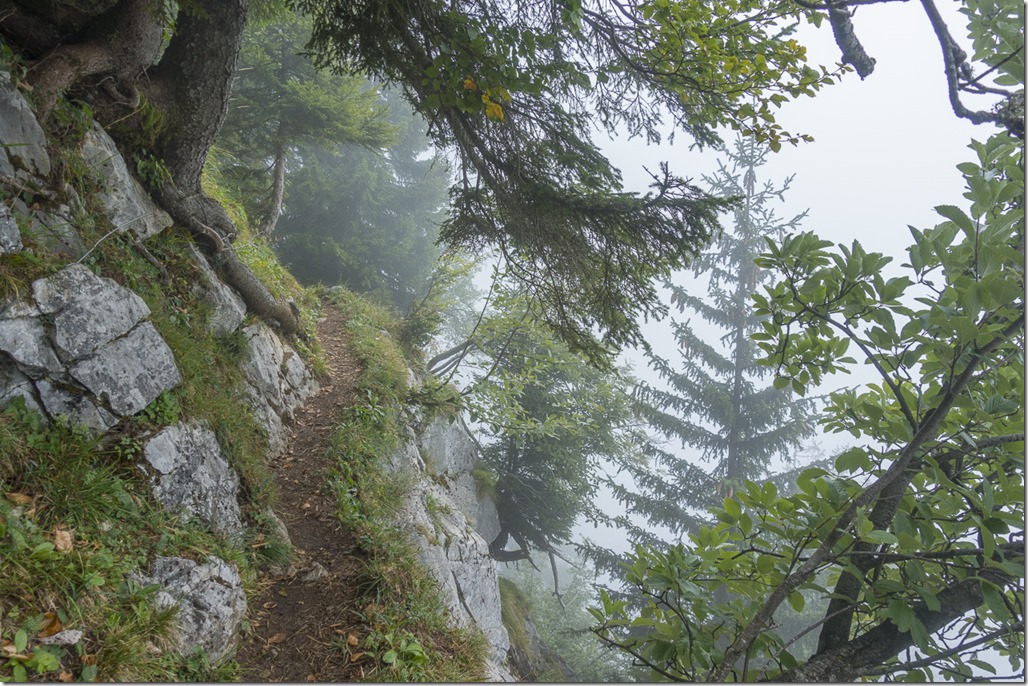 At some point I left the official trail in order to follow a less official one which short-cuts the assent to Palis Nideri. 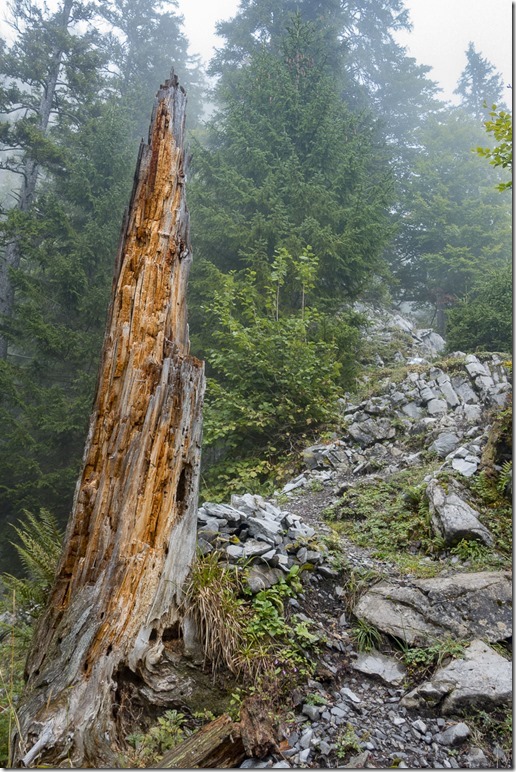 When I crossed the tree line the fog and clouds were starting to lighten up. 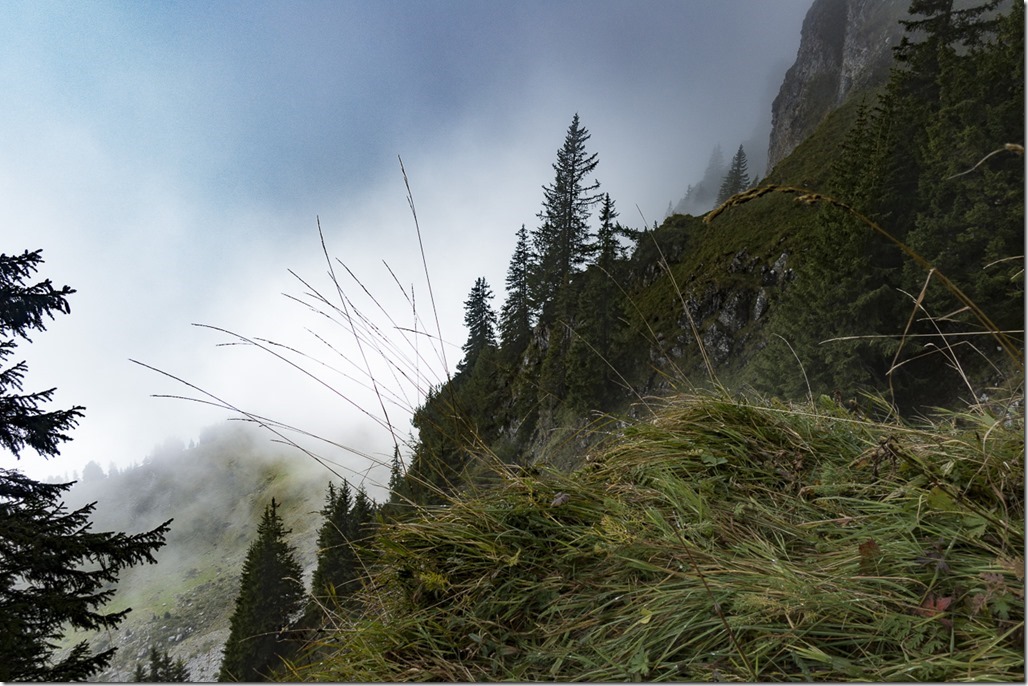 You can easily guess that I got some dramatic views, with light, shadows and clouds. 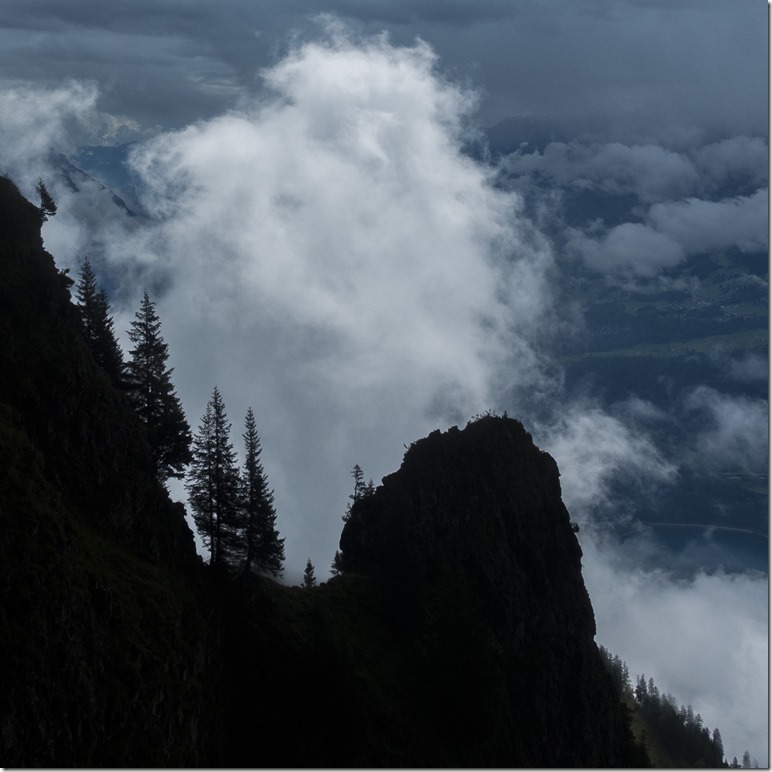 My plan was to take a long loop around Zuestoll mountain in order to reach the entry point for the Schnürliweg. I know there is a straight path to that point on the front of Zuestoll but it requires some abseiling. Nevertheless when I was on the the Palis Nideri which is the name for the passage between Zuestoll and Brisi I wanted to check out the path for a couple of meters. To my surprise a couple was coming from the other side. I was starting to chat with them. They were trying to do the trail from this side but had to return as the grass was wet and slippery. I later checked the entry point for the other side. Looks rather doable with the proper gear –> new project for next year

Now it started to snow, actually not snow but graupel. View back to the Palis Nideri pass. 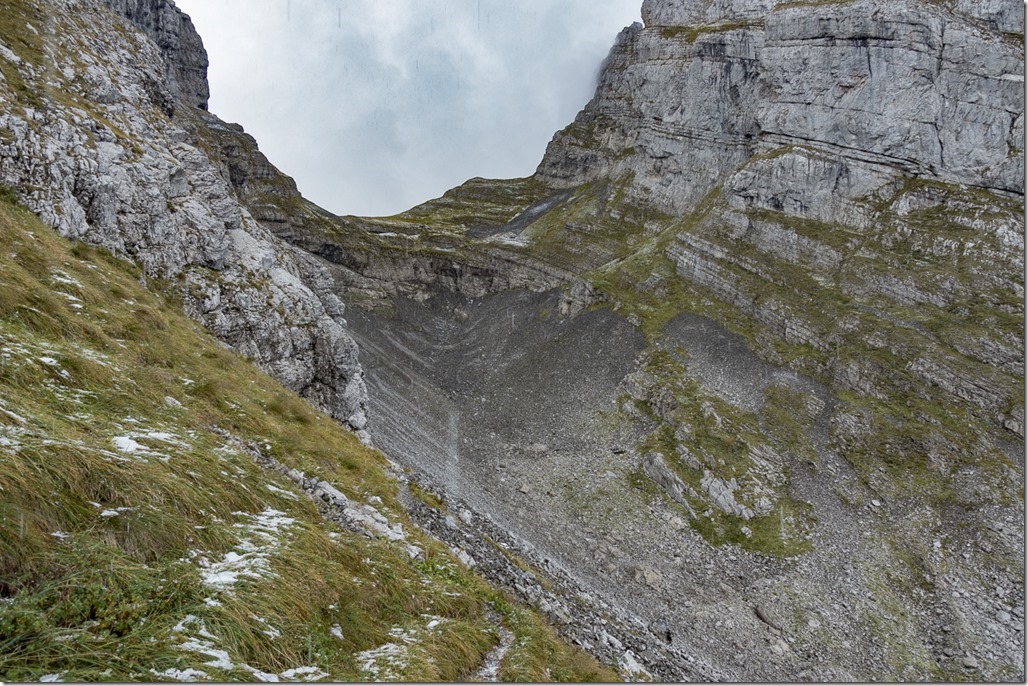 Initially I had some concerns of how the graupel would affect the quality of the trail. But I soon realized that it made things less slippery compared to the mud it was covering. More graupel please! 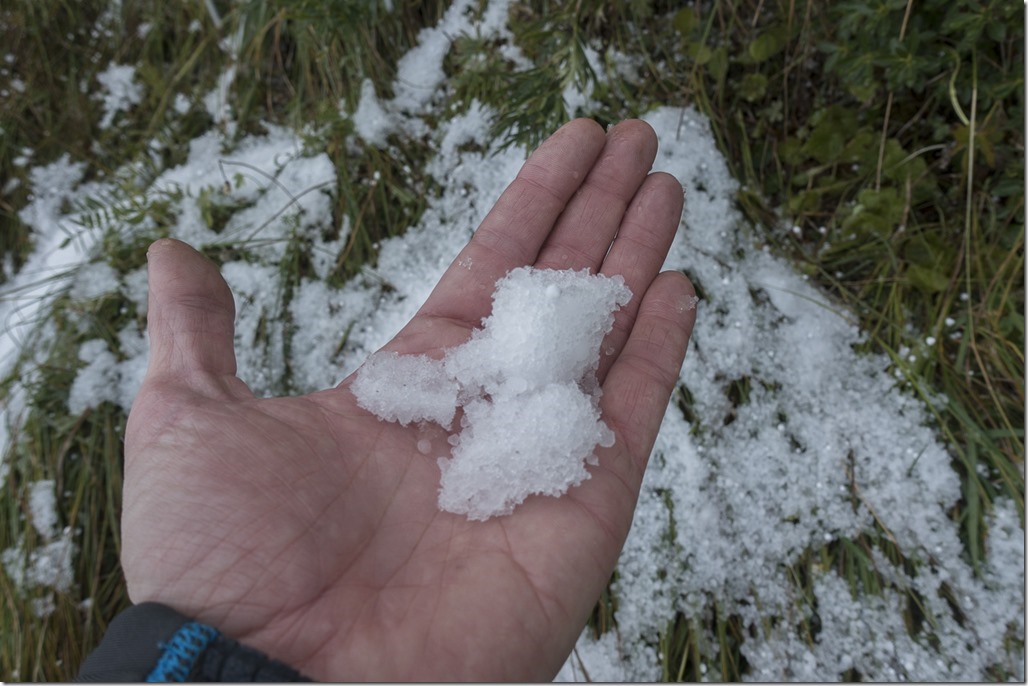 The Säntis was covered in clouds. I would assume it was the same situation as here. 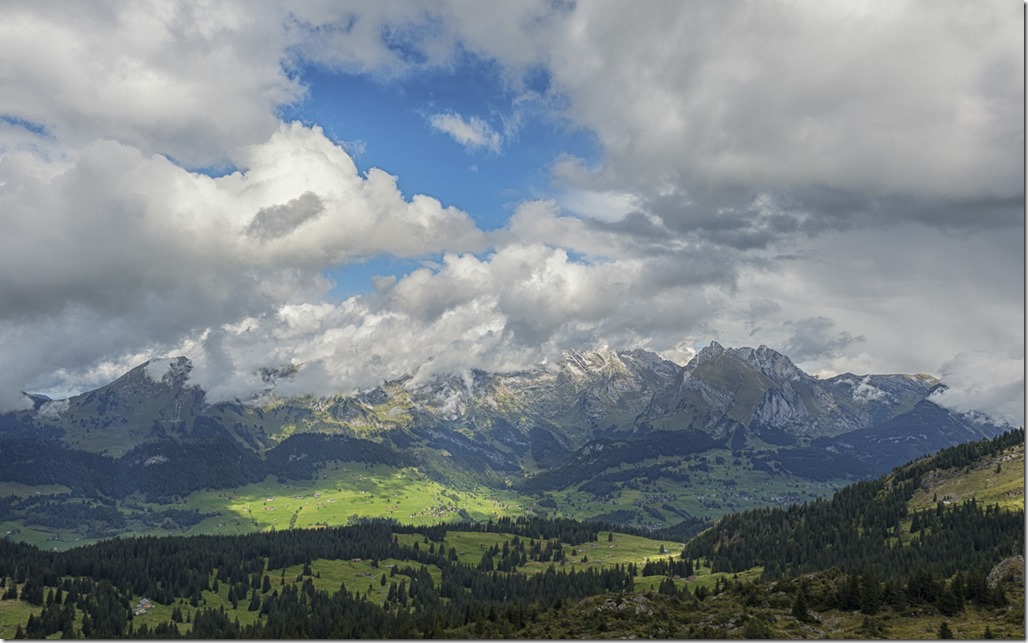 Last time I did this trail I was camping somewhere in this area. I remember that I had to get down quite a bit just to hike up the lost meters. Back then it was already dark and I was using my headlights. This time there was light and I decided I would not get down any unnecessary meter. So I started to find my way alongside the mountain. The bushes were quite high and at times the terrain quite steep. Later I had to admit to myself that going down and up would have been probably twice as fast. And there was another problem: Of course the bushes were wet from all the rain and so were my trousers after not too long… 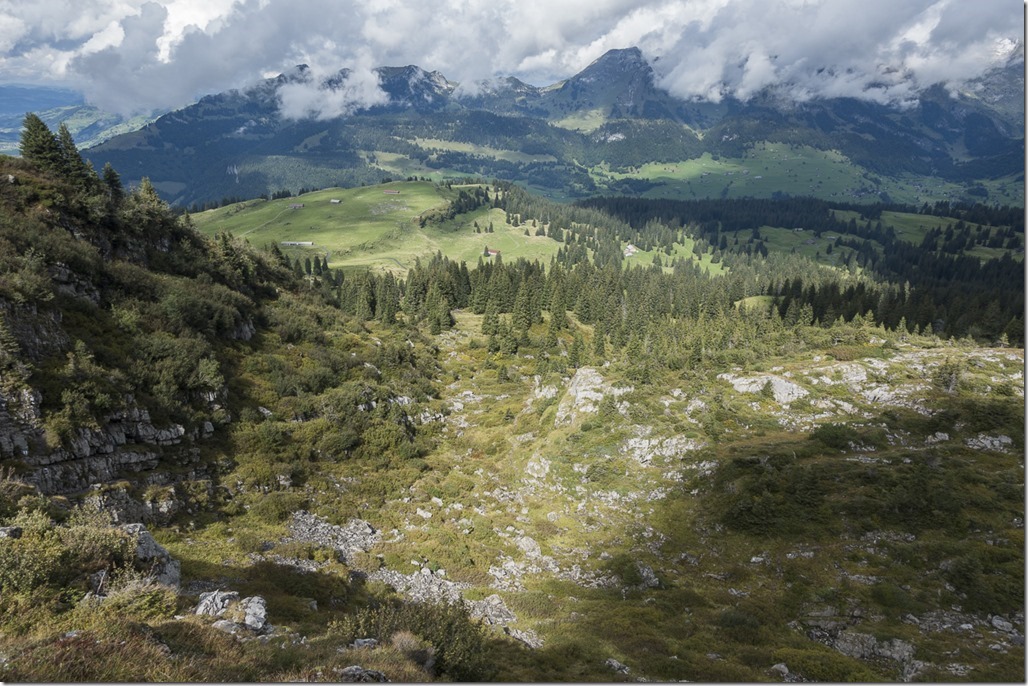 Looks like the Swiss military was here as well. THe Back of a mortar shell. 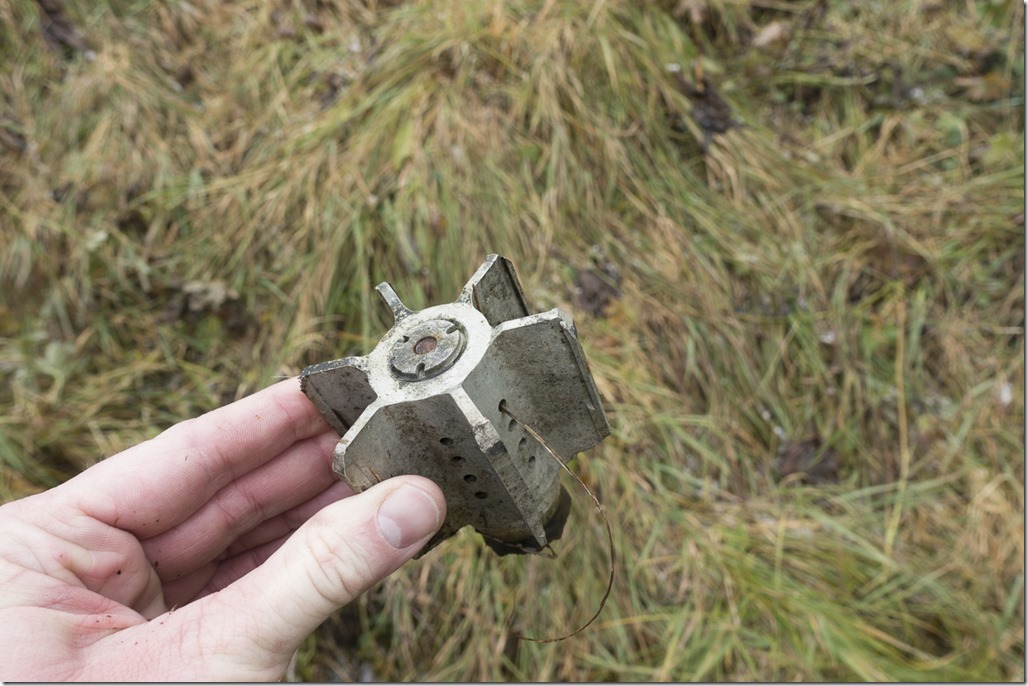 After I left the bushes behind me it was easy scrambling to the pass. 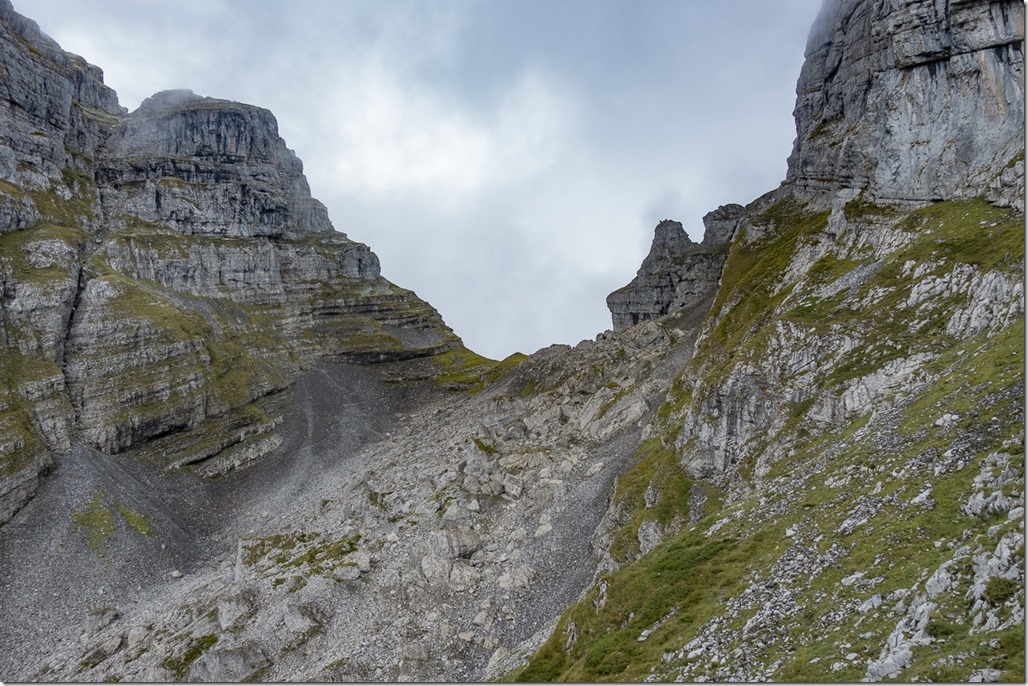 On the pass I first checked the starting point for the direct trail which I had mentioned before. Then I turned towards the Schnürliweg which translates to “little string trail”. Like a string it follows the bottom of the nearly vertical rocks of the Churfürsten. Spectacular views are guaranteed. On the following picture you can see the starting point. 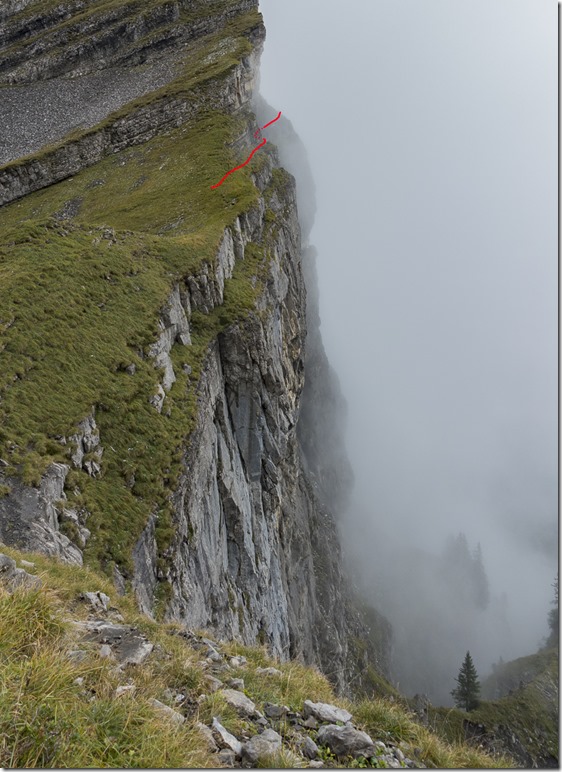 On the first meters there is a fixed rope installed. 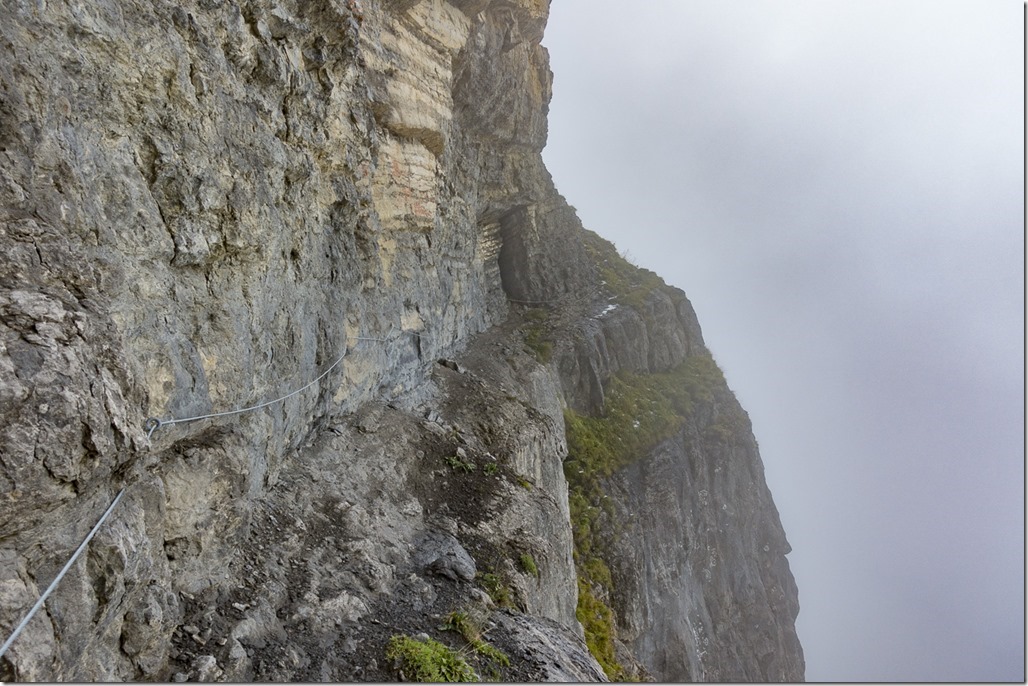 The sun and the clouds playing again with each other. 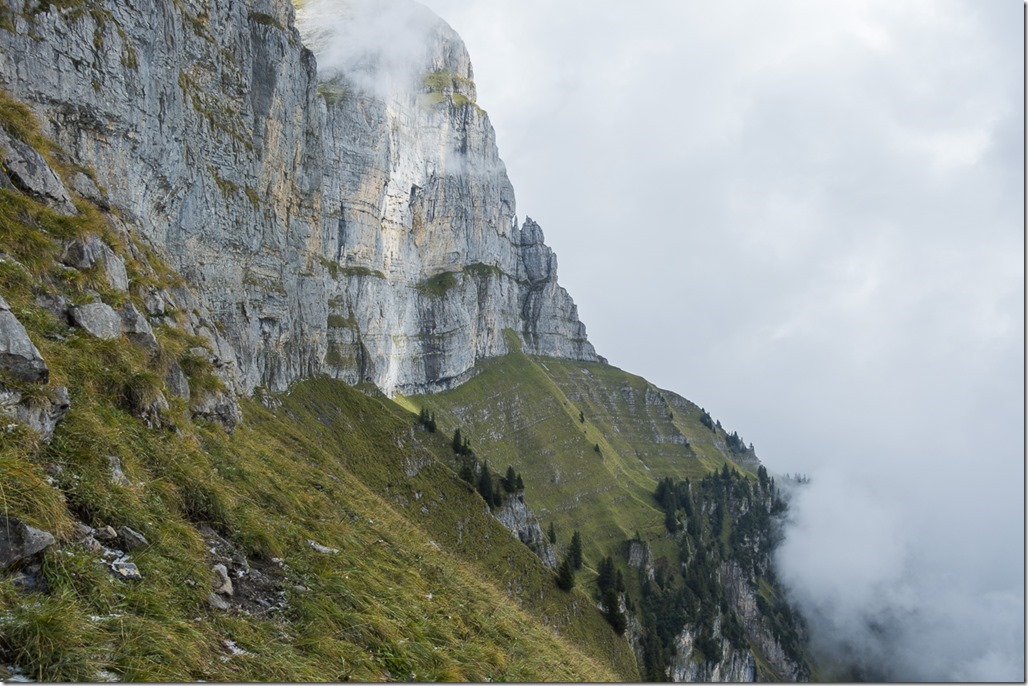 Looking back you can easily see the trail just below the rock as it was covered with some graupel. 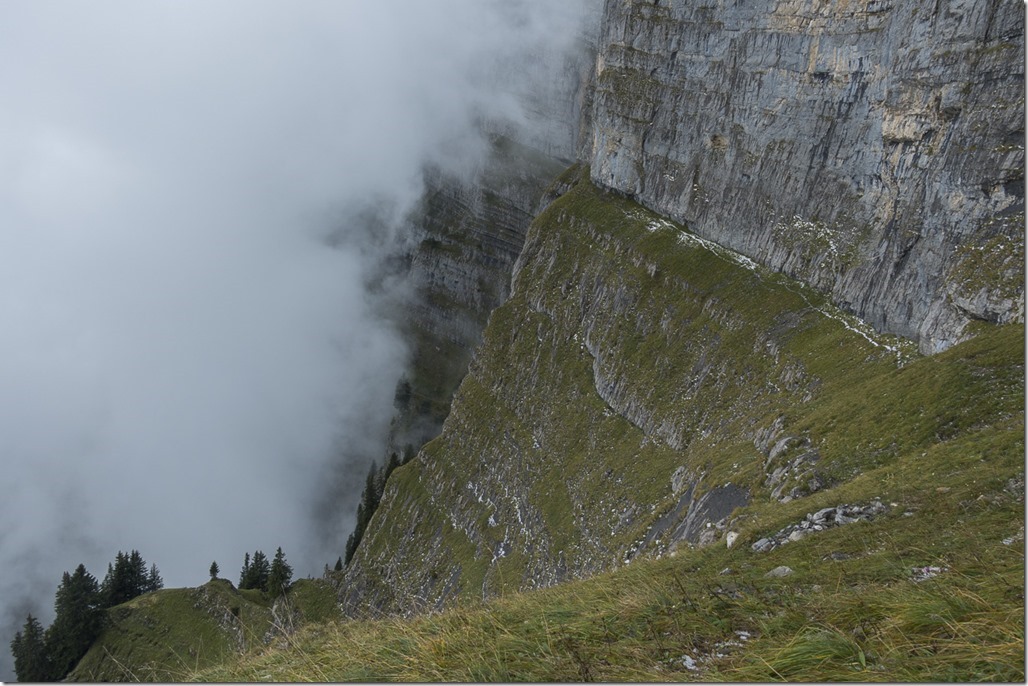 I was mentioning the amazing view, here it is: The Walensee with its typical color. 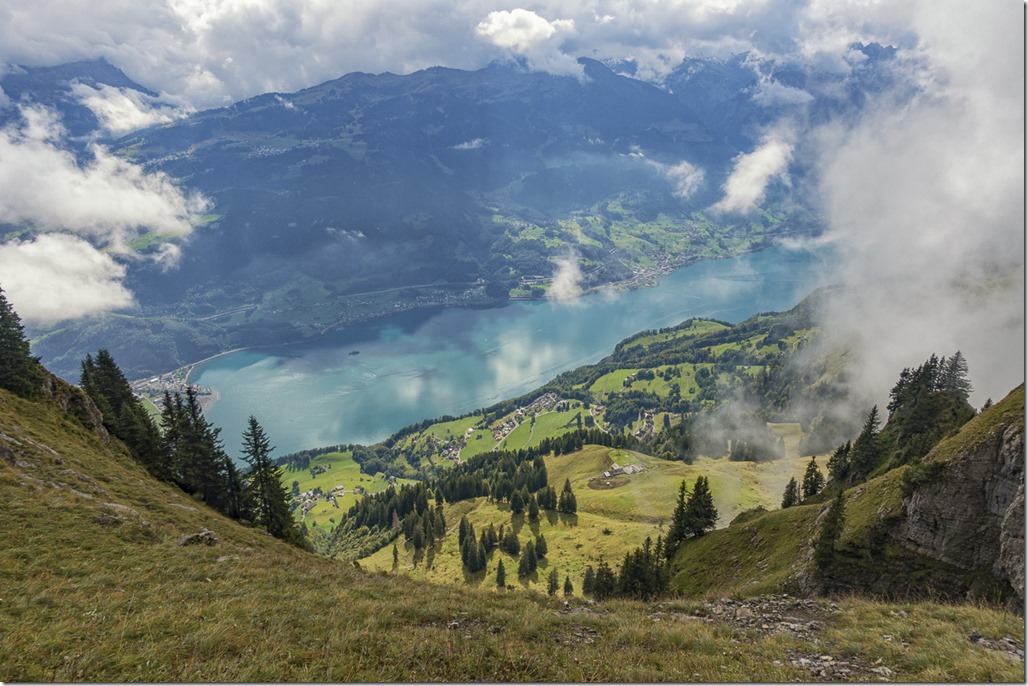 Today I met an large amount of ibex (Steinböcke). This is the only group which was showing pride and was not just running away. And another view of the Walensee Nice art made of a dead tree. On my way back I was able to have a look at the place I was before, still partly covered by clouds.

Mh, Interesting! I think I found my new camping spot.  Added to my todo list! And then they were back again, the cows. And with them the super muddy hiking trail. This time  I wasn’t so much thinking of happy cows but rather of a juicy piece of meat …. You can see that autumn is coming. The leaves are already turning yellowish. 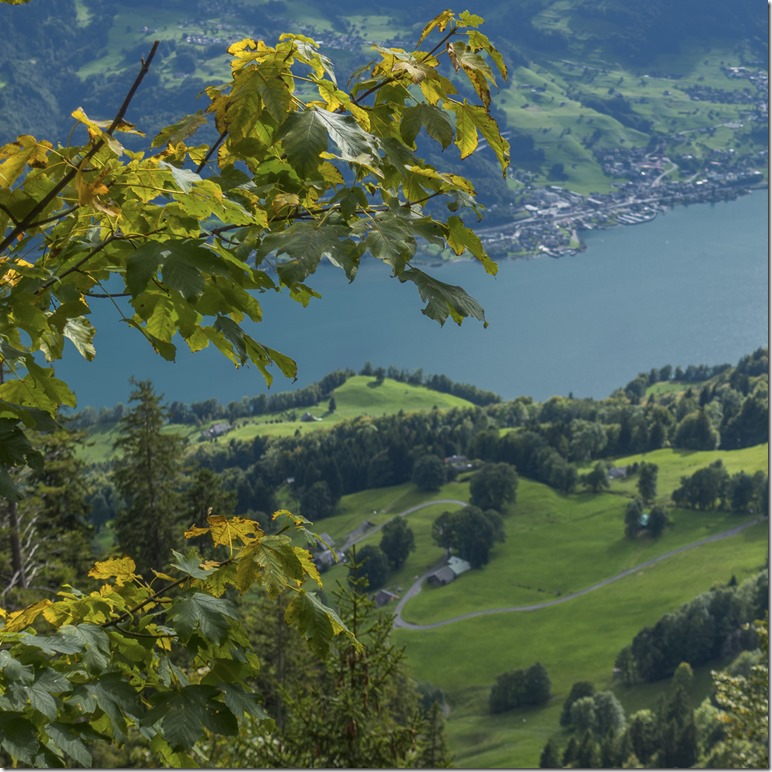 Just before returning to my care I was visiting the Paxmal monument by Karl Bickel. Nice place if the weather is good. I was once attending a wedding here.