Today was the day when we turned around and are on the long way back towards Cape Town. The first part was to fly back to Tulear where we had entered Madagascar before. But before we could fly there we had to take the boat from our lodge in the Masoala park. And even before that we could witness a very nice sunrise after the showers during the night. 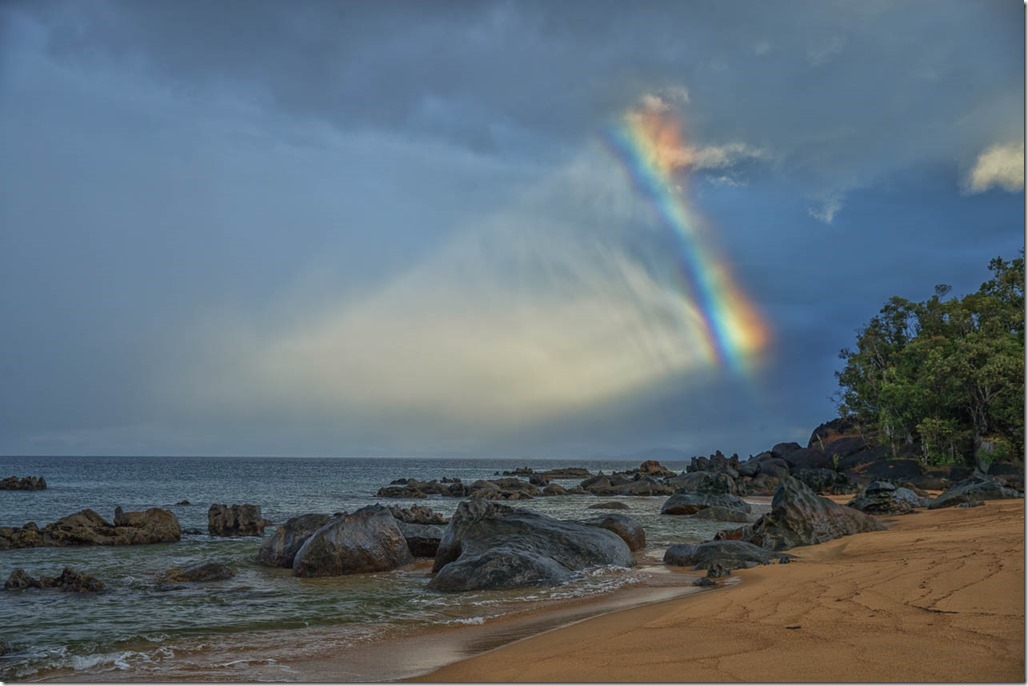 Nice reflections in small river next to our lodge. 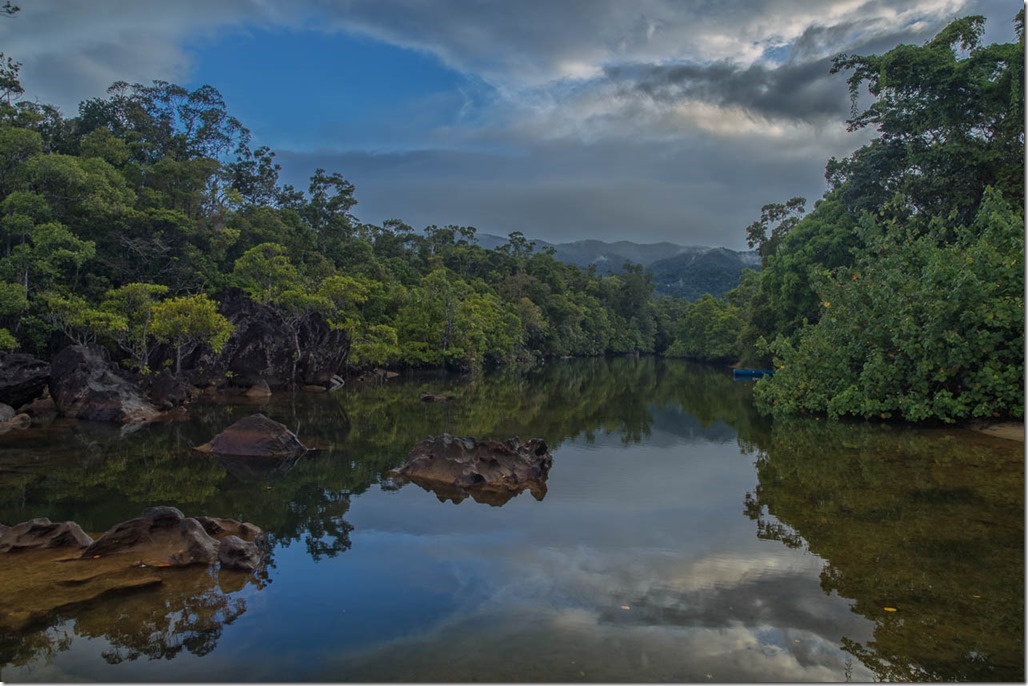 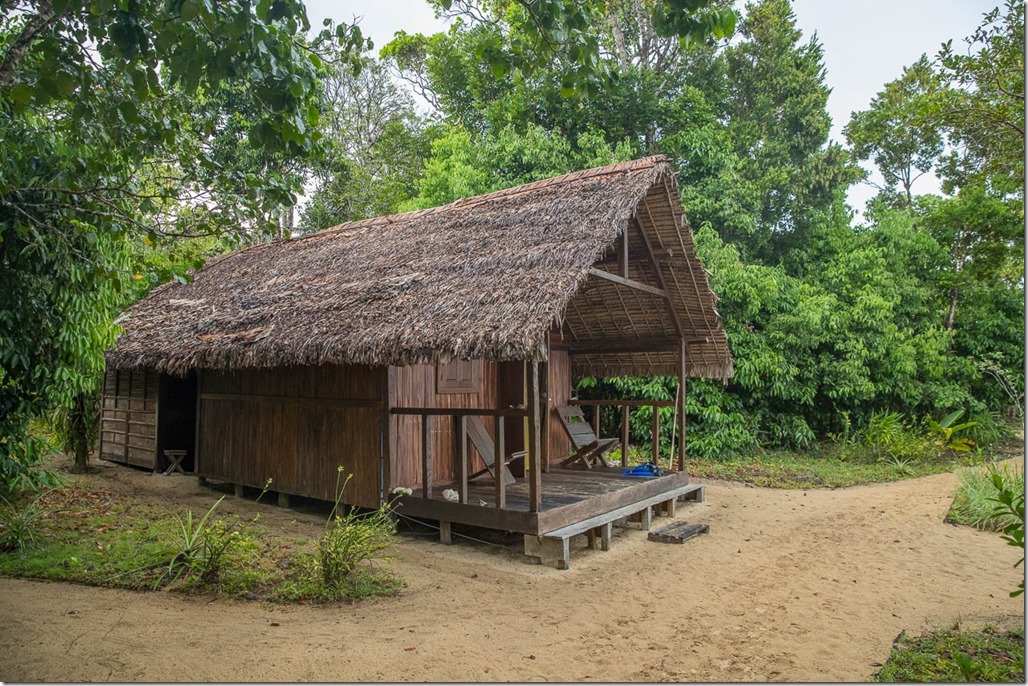 … and the view towards the ocean. 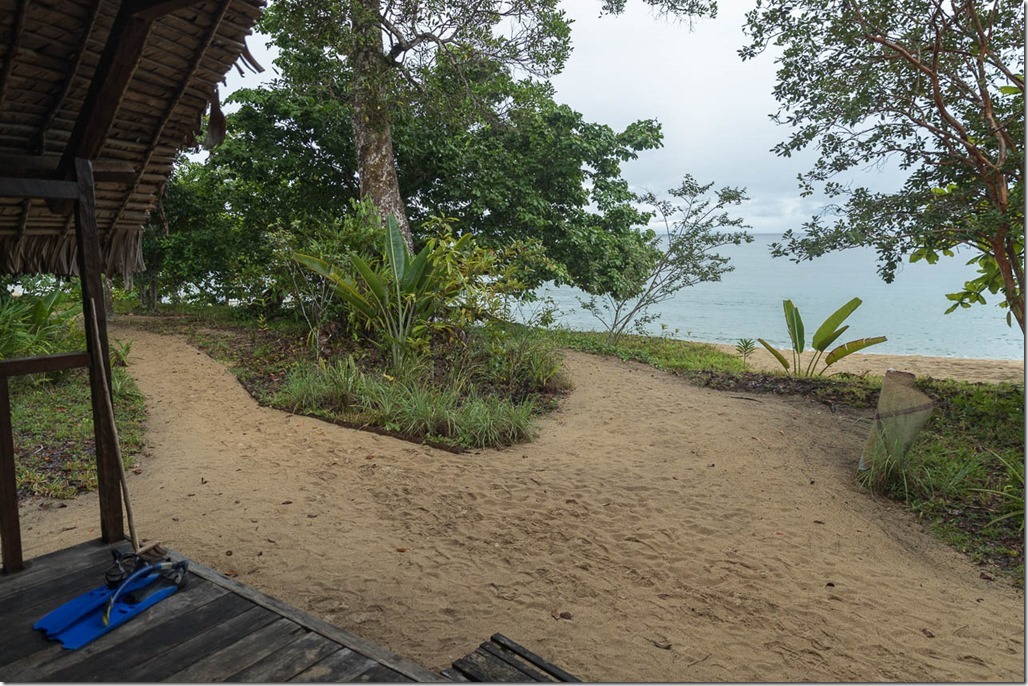 I have already mentioned the rain during the night and how the water found its way through the roof into my bed and bags. So no reason to iterate that. But I have to mention the ride with the boat back to our plane. One the way in everybody of us had a close encounter of the element water. On the way back we were much better prepared: Tactic 1 was to go as lightly dressed as possible and just accept the ocean water or, tactic 2, go normally dressed but with serious rain gear on. There was another tactic deployed which can be regarded as a variation of tactic 1: Get wet before actually getting onto the boat. While initially this looked as a very smart move it later became apparent that this tactic was flawed as nobody except 1-2 got wet during the whole ride …

The flight today was across the whole island of Madagascar with a lot of clouds. So the number of nice pictures from the air was rather limited. 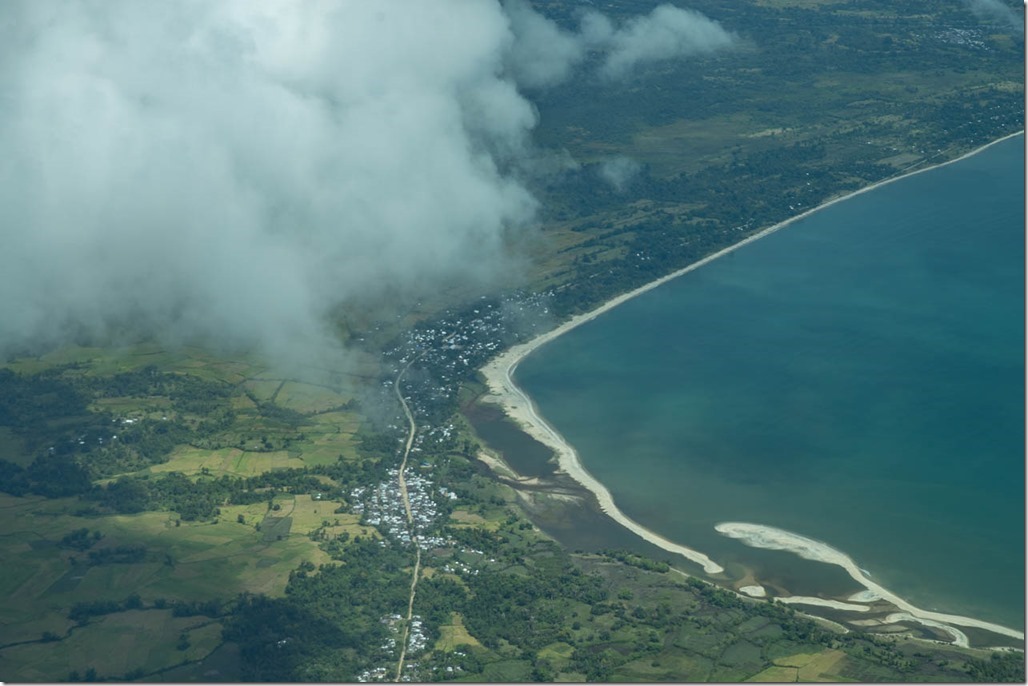 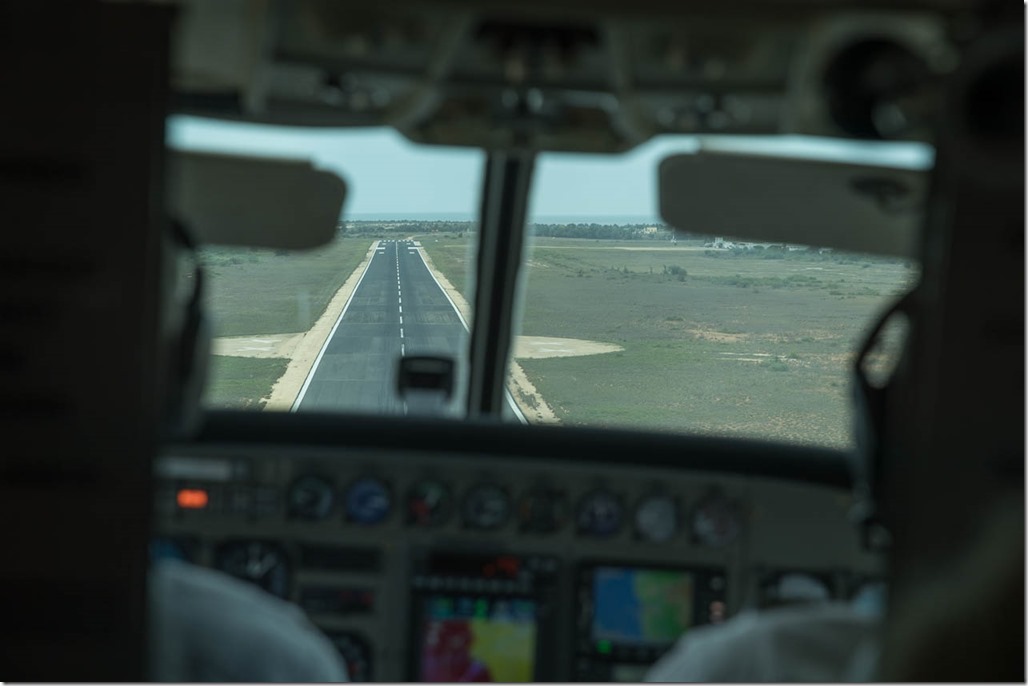 Back in Tulear we also got back the chocks for the plane which we forget there when departing. It is still a miracle how this could have happened as you can’t just roll over them when positioned at the wheel. 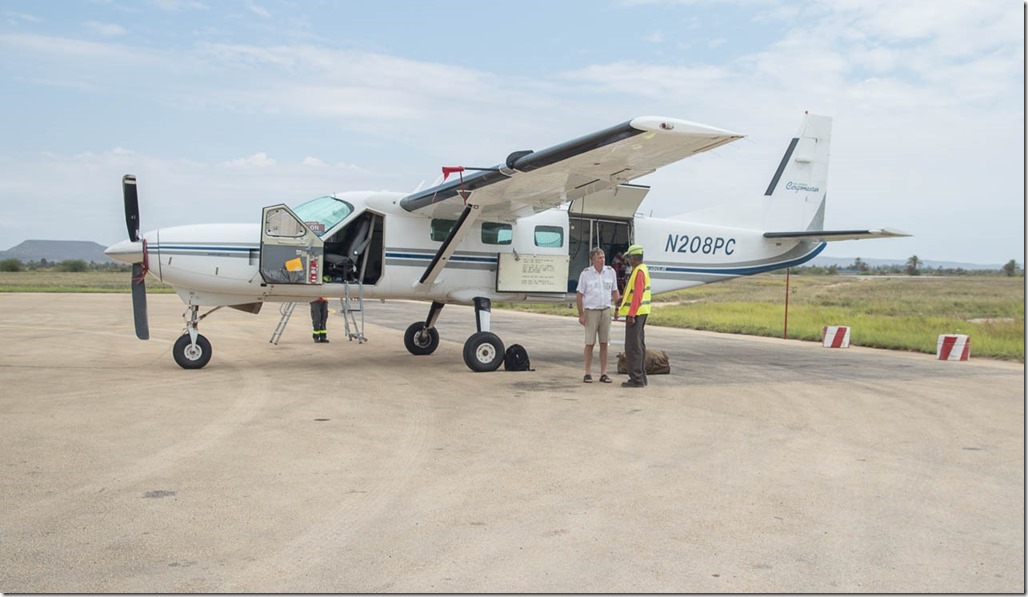 The lodge where we stayed for tonight is beautifully located on the beach and was already home of Georg’s many visits to Madagascar when flying French doctors to remote hospitals. It is own by somebody from Switzerland so it felt a bit like home.

There are Mangrove trees in the water and the sea is very swallow for a couple of kilometres. 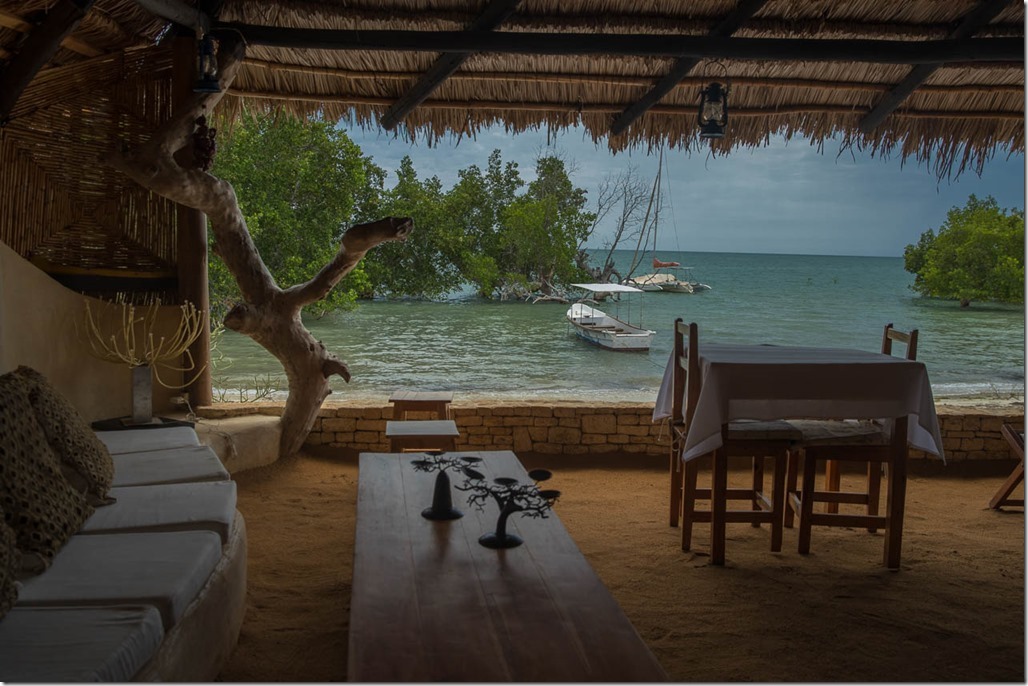 For those who preferred fresh water there was a swimming pool. I would it is safe to say that the relaxing part of our journey has started. 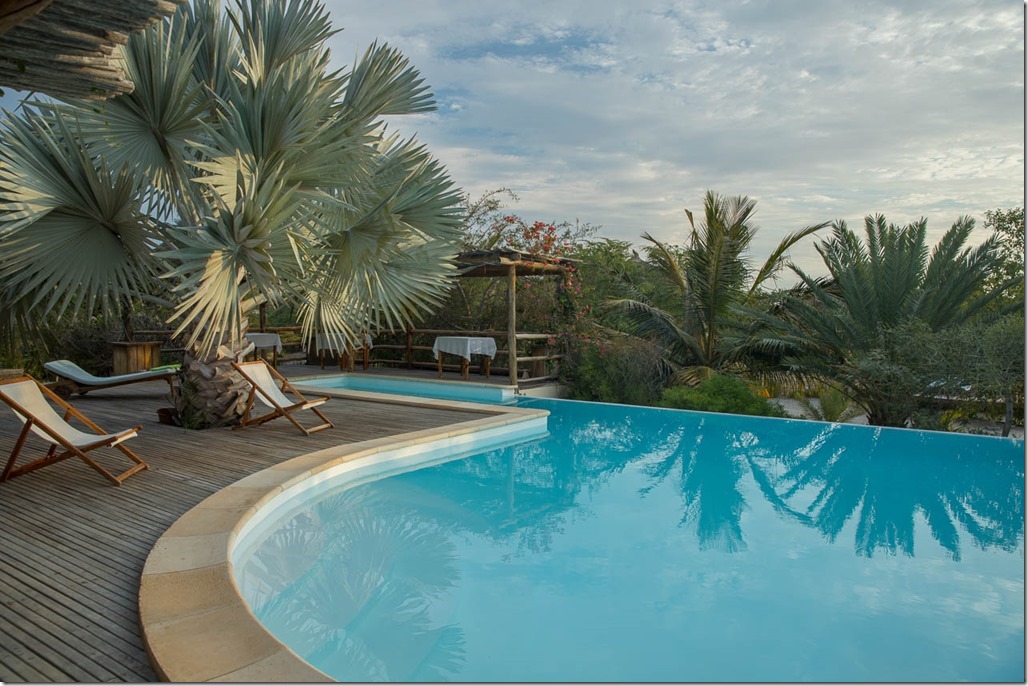 Sun is setting. If you pay attention you can also see a small fisher boat on the horizon. By now it should be pretty obvious what we did at this point … Correct! Drinking mineral water … well kind of … 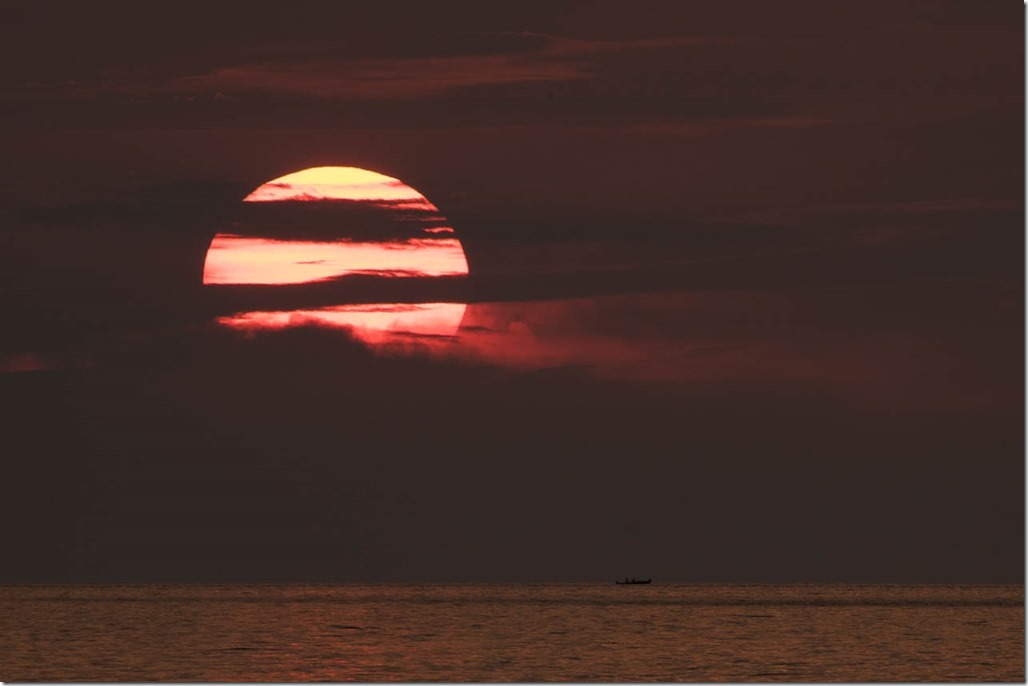 During the dinner some of the people working for this lodge were playing a couple of songs and their kids performed some dances. The picture which showed us dancing later that night have been confiscated and will not be released to the general public for the next 55 years. 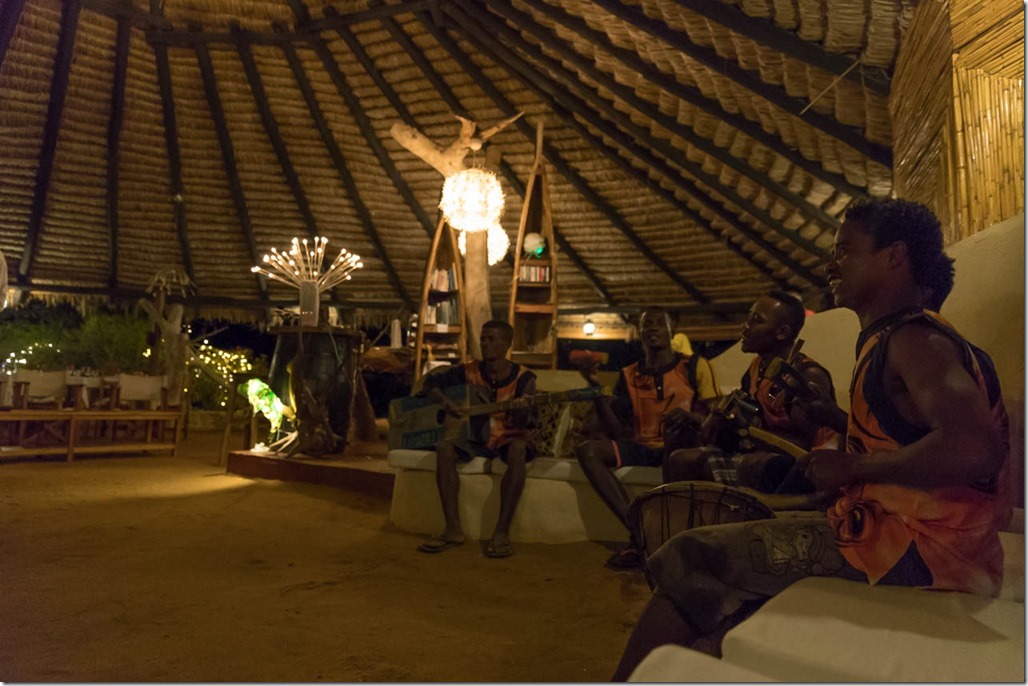 The next day started early. One of the reasons was that we were competing with a group of French doctors for the two vehicles to go to the airport. The second reason was that we had a long flight back to South Africa ahead of us. The flight turned out to be quite a challenge for the pilots. Soon after taking off the weather radar in the plane showed regions of thunderstorms ahead of us. I think it is pretty obvious that the red areas don’t mean anything good 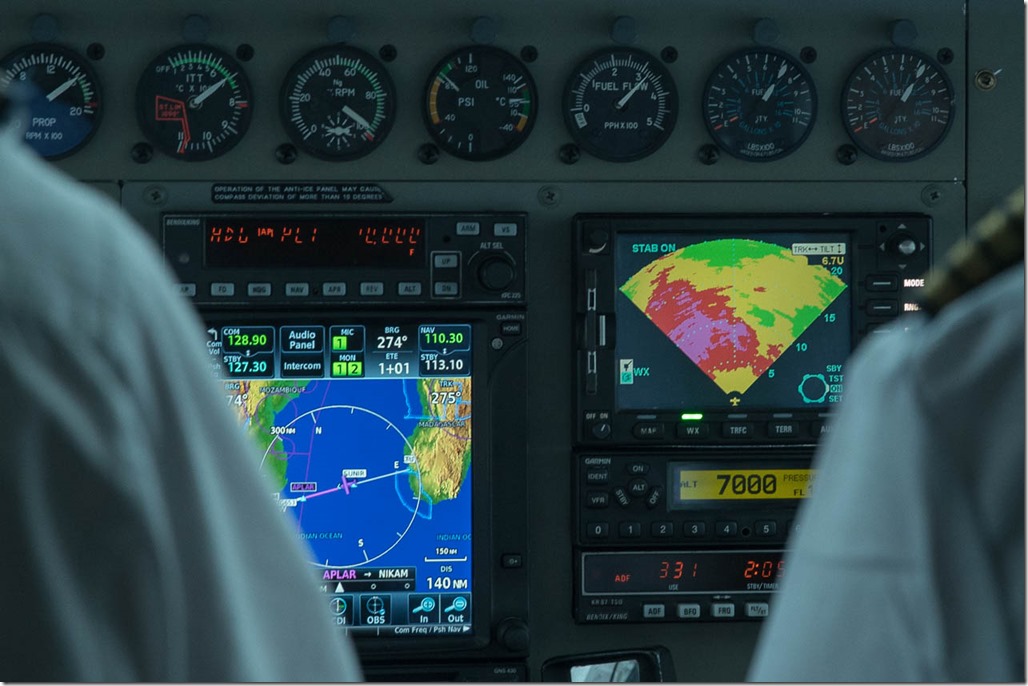 So we had to adjust our flying direction a number of times in order to avoid the thunderstorms. Nevertheless we could see the flash of lightings around us a couple of times. Furthermore there was a strong head wind which was slowing down the plane considerably. Flying higher was also not an option as the wind got stronger. Later in the flight when we had the thunderstorms behind us we got some turbulences. In the end the flight was close to 5:45h instead of the expected 4:30h.

Shortly before landing in Kruger International Airport you can clearly see the southern border of the Kruger park. 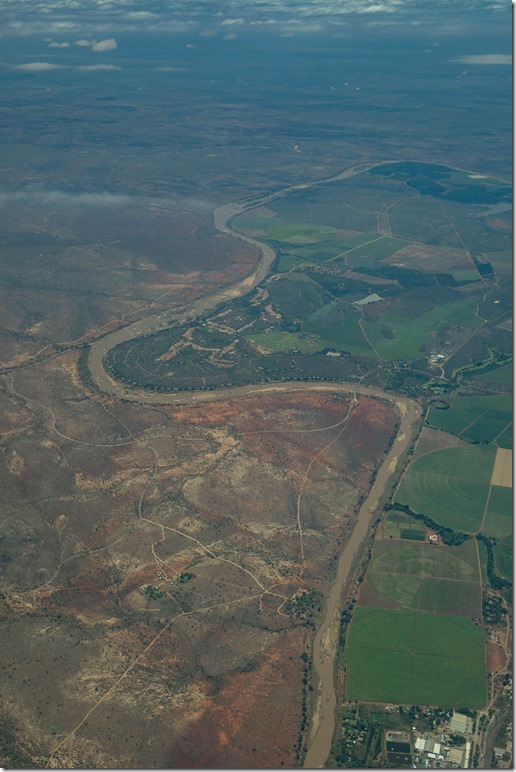 In Kruger International Airport we did the immigration to South Africa before flying north to Hoedspruit where would stay for two nights in a newly built lodge of a friend of Reinhard, our second pilot.

Normally this would have been the end of this story, but today I have some bonus material. Before taking off in Kruger International Airport the pilots were studying the description of our destination called “Hoedspruit Civil”. 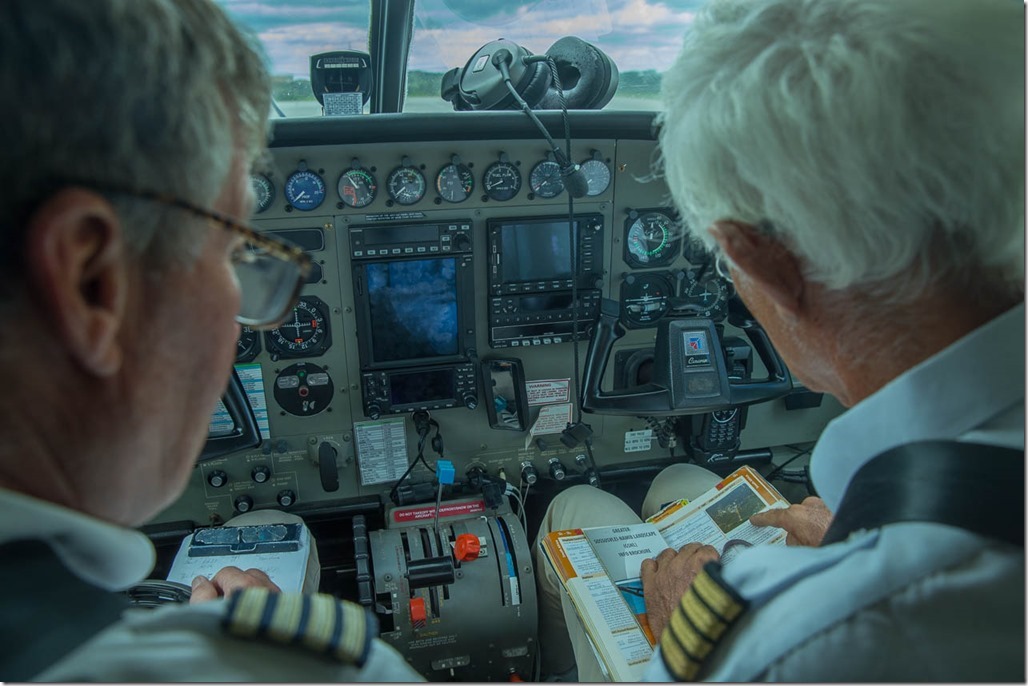 Then the coordinates where entered into the flight computer. 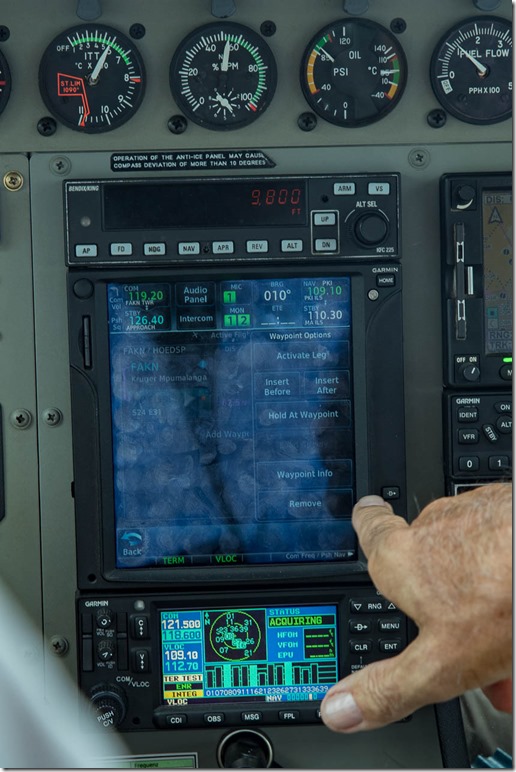 After completing the start-up checklist we started flying to our destination. 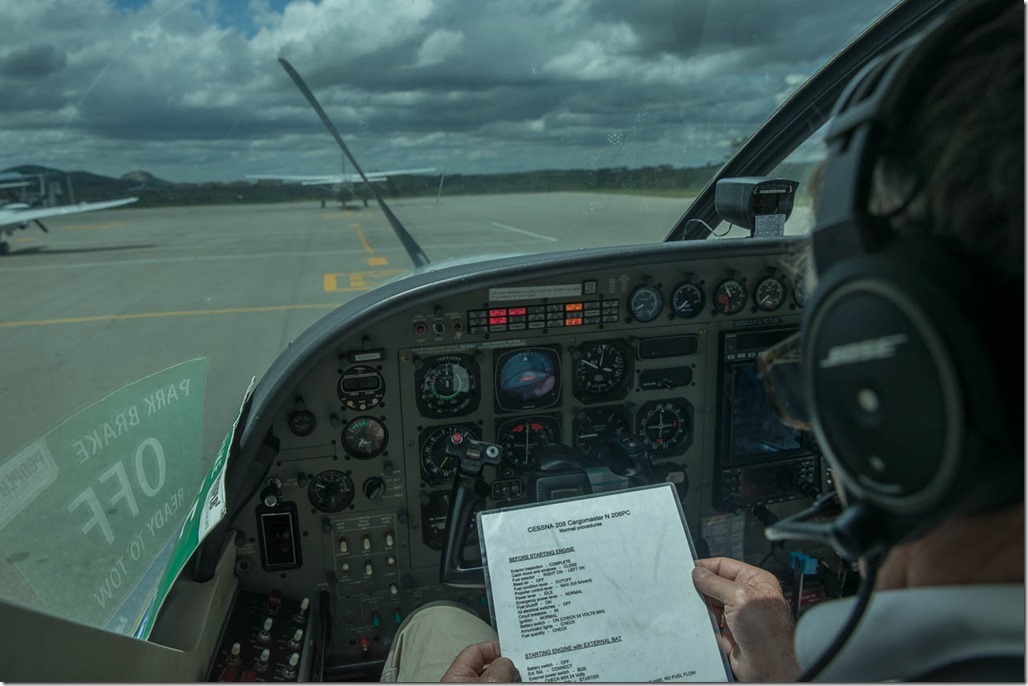 The airstrip was very narrow and made out of bricks which was kind of unique for our pilots with many thousand landings. As we were reaching the parking position they were asked by the controller of the nearby Hoedspruit International Airport: “Are you sure you have landed at the right airport?” In fact the navigation computer was still showing 1.5 miles distance to the set set waypoint?! Then they were asked: “Is the runway paved of made out of bricks?”  – “Bricks!” – “Then you are in the wrong airstrip” …

Looking at the GPS track it is obvious why we ended up in the wrong place: Both airstrips have the same direction and when coming from the South you see the “wrong” one first. 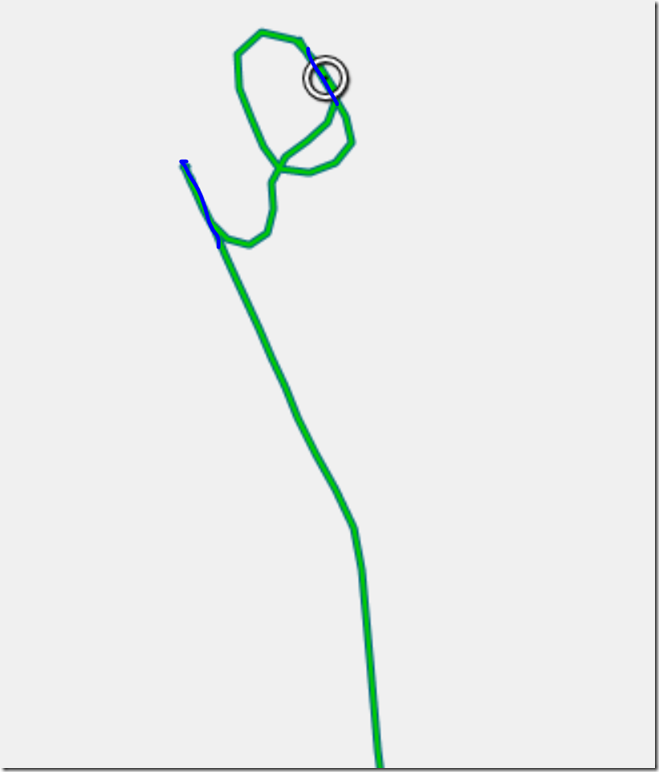 That was no problem at all! After a short loop we landed in the right spot where Erich from the Bateleur’s Nest Lodge was already waiting for us. 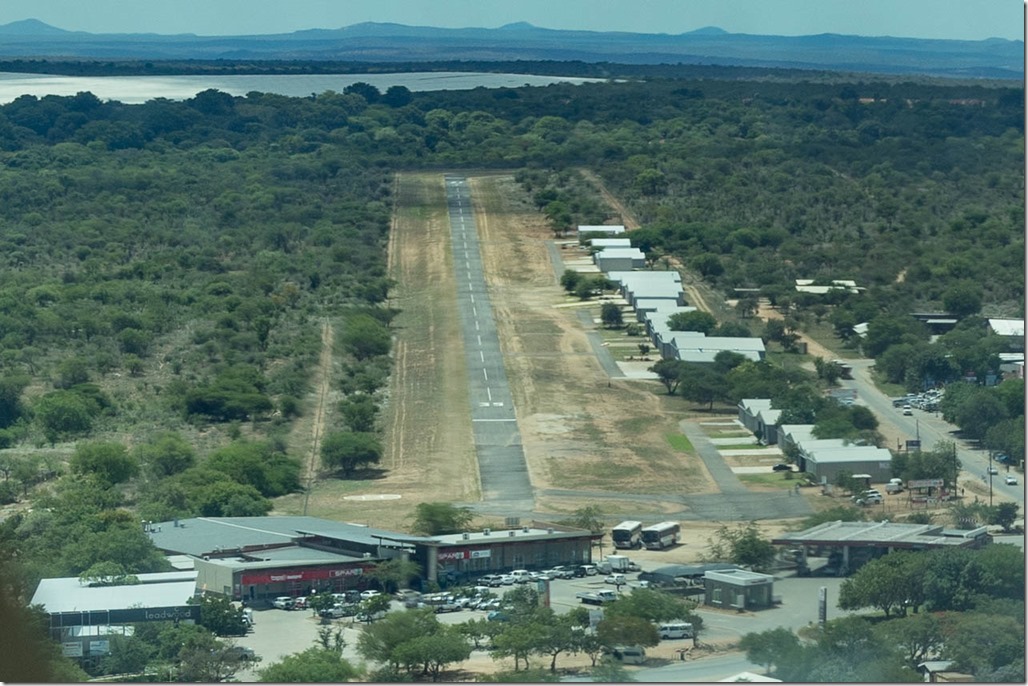